GLENCOE – On Friday, May 25, approximately 1,700 veterans marched from Glencoe to Chicago to help raise awareness of veteran suicide. Chicago Veterans started the “Ruck March” to draw attention to a staggering statistic: 20 veterans are lost each day to suicide — a number that recently dropped from 22 per day.

“Our goal is to bring awareness to the community and to anyone who will listen. This issue is there and it affects so many lives everyday,” Karen Hernandez, executive director of Chicago Veterans, told DailyNorthShore. Chicago Veterans is a nonprofit organization dedicated to supporting veterans in social/community building, employment and education.

Veterans came from all over the Chicago area, with some even flying in from states as far away as California, to participate in the event. Wearing uniforms and carrying ruck sacks that hold 20 pounds to represent lives lost each day, bearing pictures of family and friends lost to suicide, the veterans walk 20 miles from Glencoe to Chicago’s Lake Shore Drive.

While Chicago Veterans has been holding the Ruck March for five years, it wasn’t until last year that Glencoe resident Melissa Lee got involved. After seeing a long line of men and women in uniform at the Starbucks in downtown Glencoe, Lee asked what was going on. When she learned the veterans were in town for the Ruck March, Lee decided to organize her fellow residents and friends to provide a breakfast for the veterans before they walked. 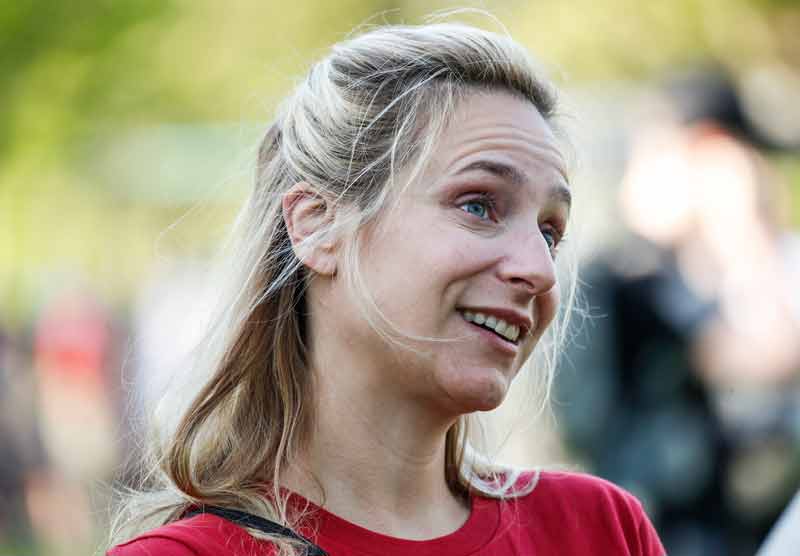 “It is really just to say thank you for your service,” Lee said.

This year marks the second year Lee will spearhead this effort. Local families, Scout troops and residents come together to donate breakfast items such as bananas, muffins and coffee to the veterans marching. A table is set up across from the train station and volunteers flag down veterans to offer the a bit to eat or drink as they step off the train.

Lee said some local businesses have also donated to the effort. Starbucks donates the coffee, while Skinny Pop donated 1,000 granola bars and 1,000 bags of popcorn. She believes the effort is an important service project that teaches her four children the value of giving back and to appreciate the service of veterans.

“It is really moving and such an easy way to give back,” Lee said.

The breakfast also provides a moment for volunteers to make a connection with veterans. And seeing the photos of loved ones on the veteran’s backpacks has a meaningful impact on everyone who attends the event. Lee and other volunteers were to surprised to see that so many of the veterans marching are young men and women.

While providing breakfast may seem like a small gesture, it is not lost on the volunteers or participants of the march. Hernandez said instead of changing the start location from Glencoe when the suicide numbers dropped to 20, they shortened the walk at the other end because of Glencoe’s unwavering support.

Lee believes that this small effort is an example of how anyone can get involved and be of service to others. “A community can come together to care and do something. It is in our backyard and we can make a difference,” she said.

Here are several images from the Ruck March 2018. PHOTOGRAPHY BY JOEL LERNER/JWC MEDIA: 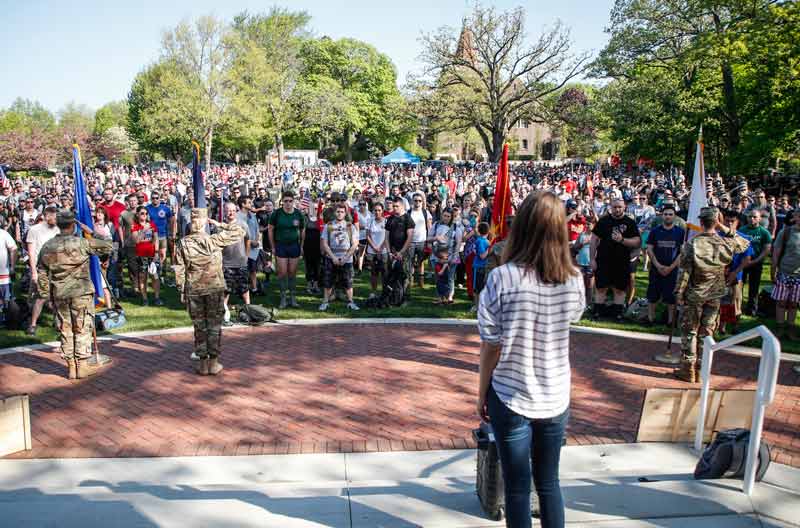 The assembled marchers during the National Anthem. 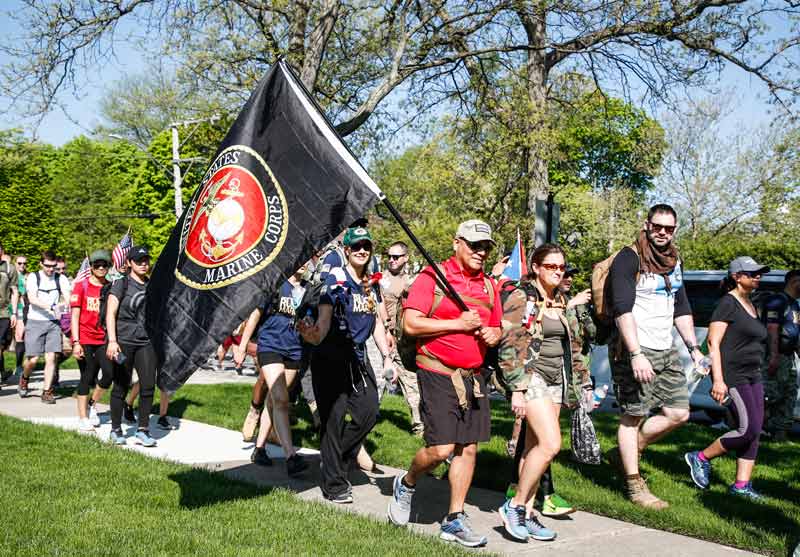 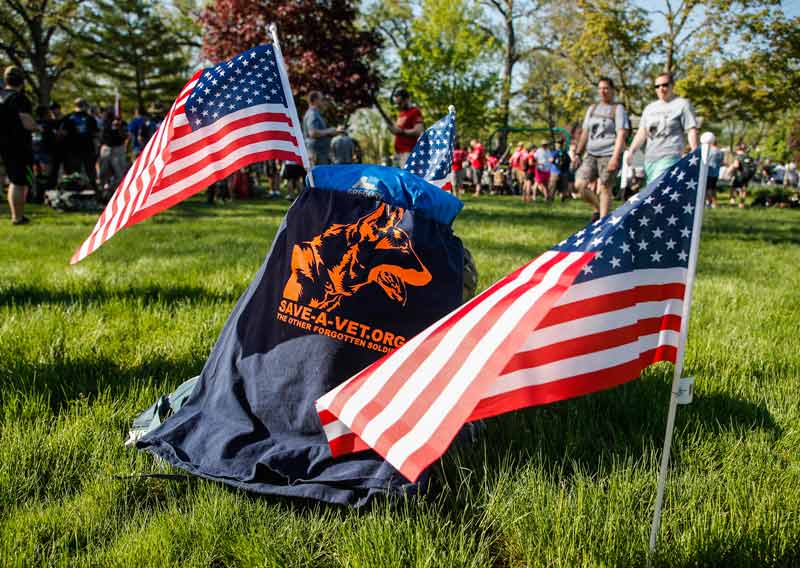 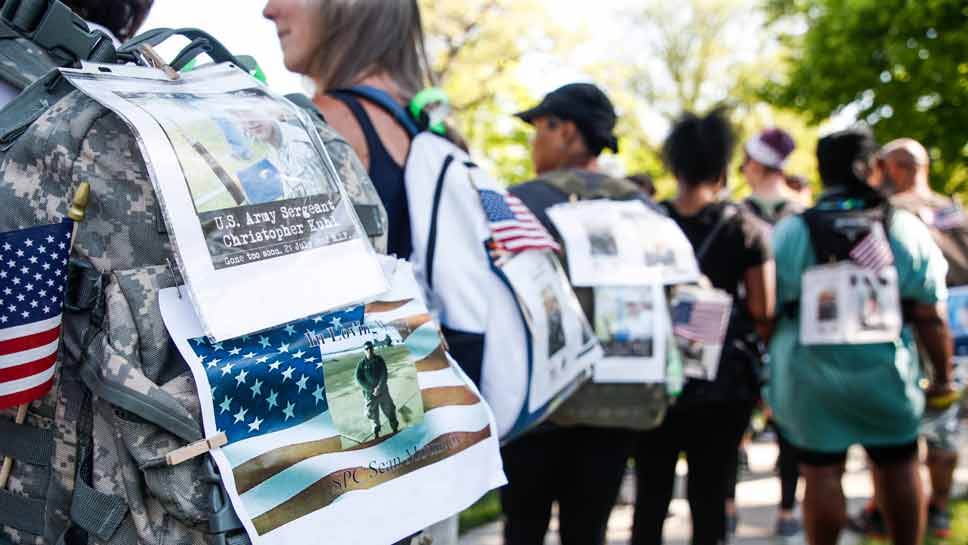 Many of the marchers have photos of loved ones who have died or committed suicide on their rucksacks during the 5th annual Ruck March. 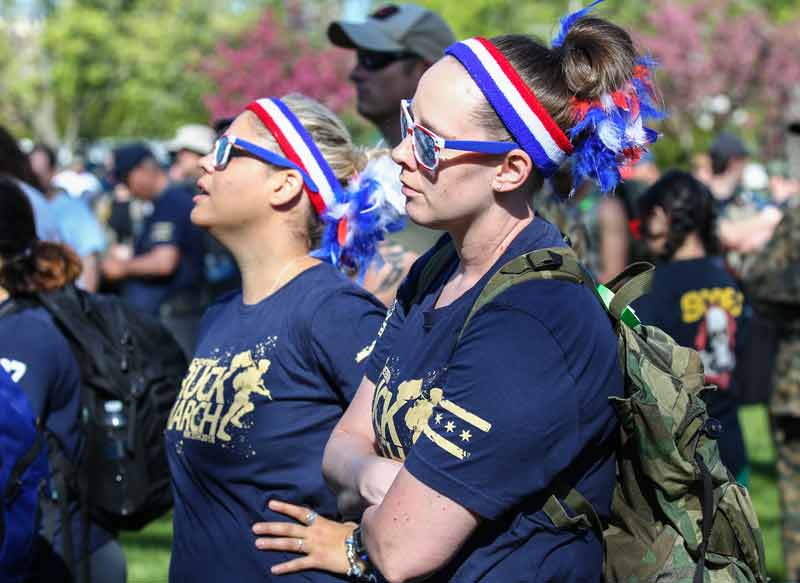 Navy veteran Stefanie Stone of Skokie, and her friend Rachel Delgado of Wheeling listen to speakers before the march begins. 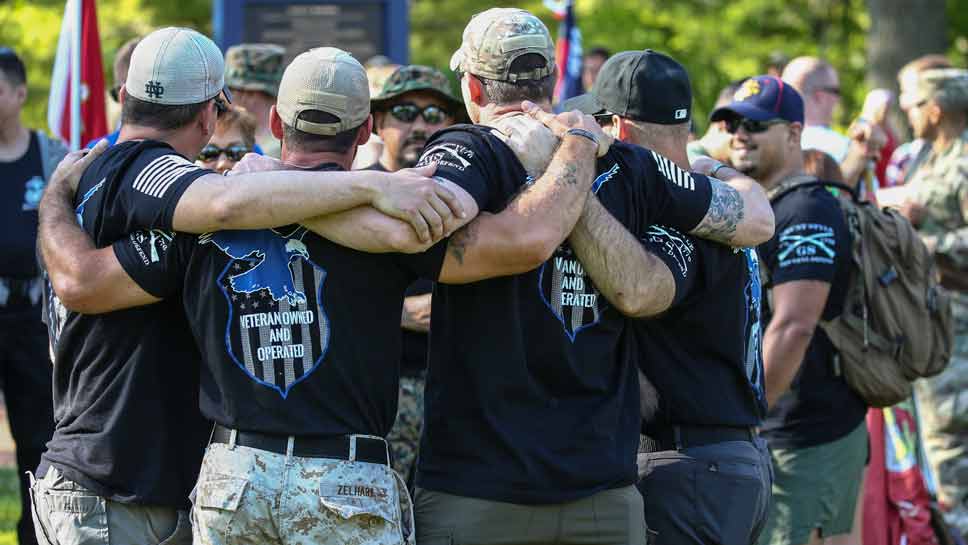 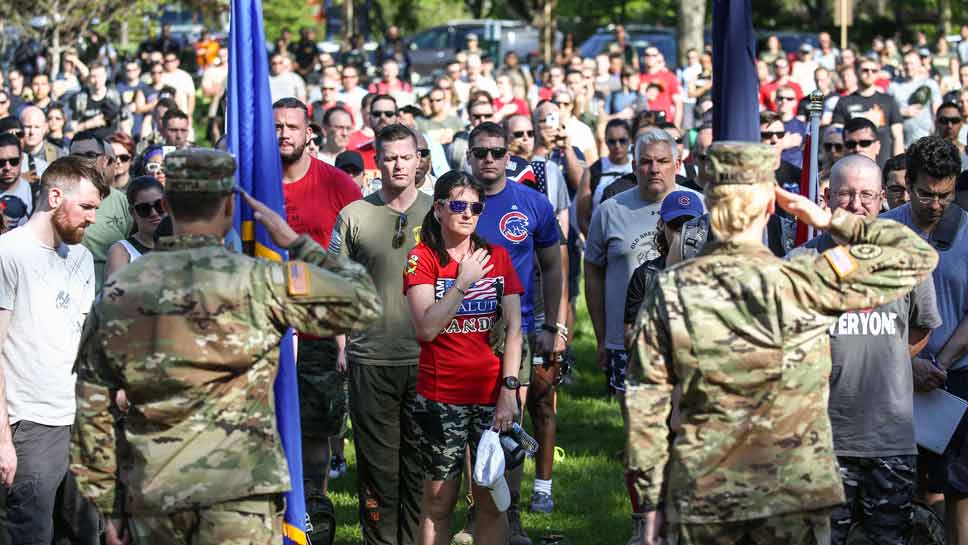 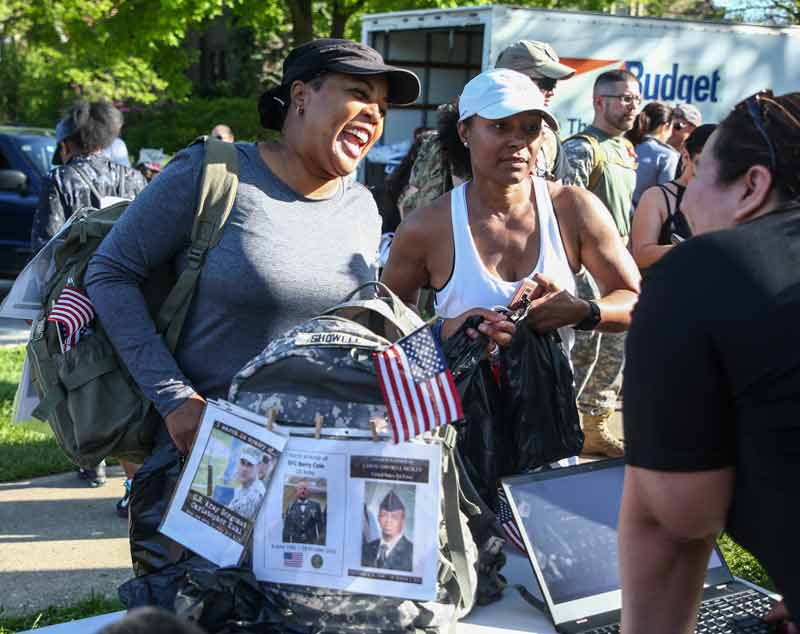 Veterans Patricia Wallace from Elgin and Sheila Showell of Zion checking in before the march. 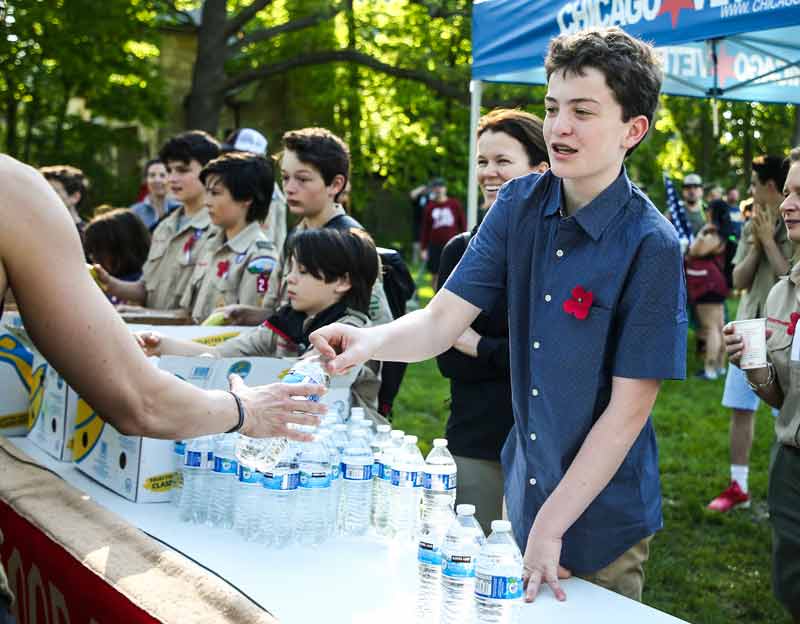 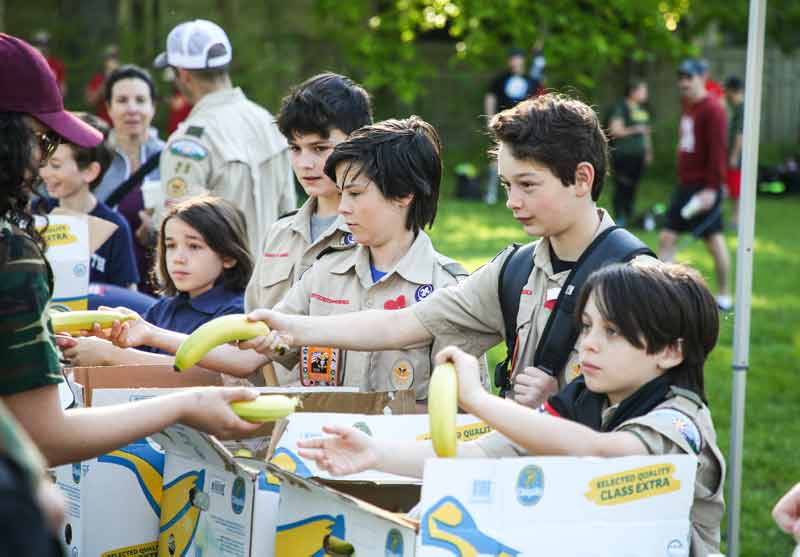 Scouts from Glencoe Troop 28 get in on the volunteer event.