HIGHLAND PARK — In honor of National Gun Violence Awareness Day on Saturday, June 2, corporations, mayors, residents and a series of iconic landmarks in all 50 states will participate in the Wear Orange campaign.

● Communities throughout Illinois and beyond will join together to showcase the full creativity of Wear Orange supporters from concerts to picnics in the park to orange walks to meeting at local landmarks as they turn orange. Wear Orange Weekend events are planned to honor of National Gun Violence Awareness in Highland Park, Deerfield and Chicago. Specific event details noted below.

“Five years ago, a group of friends and I came together to create Project Orange Tree to honor our dear friend Hadiya and the countless others who have been affected by gun violence,” said Nza-Ari Khepra, founder of Project Orange Tree and co-creator of Wear Orange. “Since then, it has truly been an honor to watch this movement continually grow and touch every corner of our country with events and landmark lightings. This year, Wear Orange reminds us that we are an unstoppable force that is well on it’s way to creating an America that will be free of gun violence.”

Orange is the color that Hadiya Pendleton’s friends wore in her honor after she was shot and killed in Chicago at the age of 15 – just one week after performing at President Obama’s 2nd inaugural parade in 2013. After her death, her friends asked us to stand up, speak out and Wear Orange to raise awareness about gun violence. Orange honors the more than 90 lives cut short
and the hundreds more wounded by gun violence every day – and demands action.

Last year more than 500 noteworthy individuals and organizations, including President Obama, Julianne Moore, Kim Kardashian West, Amy Schumer, Vogue, Teen Vogue and Viacom answered the call, making their support for the movement loud and clear. And across the country, nearly 250,000 people took action online and in person at events. This year promises to reach much, much further—the skyline is the limit. Landmarks across the country – in all 50 states – will go orange in support of National Gun Violence Awareness Day.

About Wear Orange
In 2013, a small group of teens at a South Side Chicago high school asked their classmates to honor the life of their murdered friend Hadiya Pendleton by wearing orange – the color hunters wear in the woods to protect themselves and others and a color that reflects the value of human life. They inspired the Wear Orange campaign (wearorange.org ), a coalition of more than 500 non-profits, cultural influencers and elected officials working to reduce gun violence in America.

Spearheaded by Everytown for Gun Safety, the campaign asks Americans who believe we can do more to save lives from gun violence to do one simple thing on June 1, National Gun Violence Awareness Day : Wear Orange. Those who wear orange pledge to honor the lives of Americans stolen by gun violence, to help keep firearms out of dangerous hands and to protect our children from gun violence. Orange is the symbol of the gun violence prevention movement, and is used by activists all over the country to raise awareness. 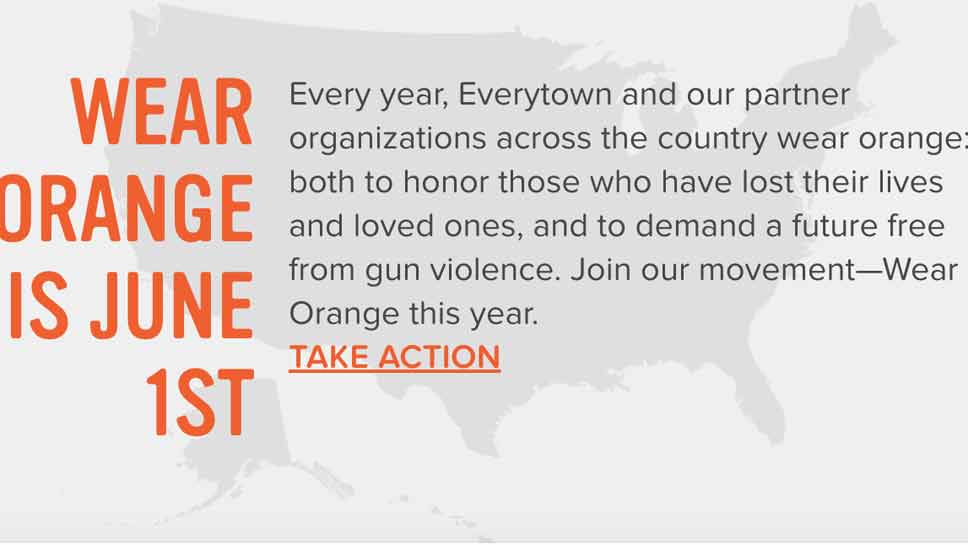