James Lynch taught acting to local non-actors at The Art Center-Highland Park (TAC) when the organization was known as the Suburban Fine Arts Center.

One of his students was a woman, whose confidence grew with each session.

“You know what else improved?” Lynch says at a Country Kitchen booth in Highland Park. “Her tennis game. Yes, her tennis game, all because of what learning to act did for her overall outlook.

“The arts should be fun, accessible,” adds the 61-year-old and 18-year resident of Highland Park.

The executive director at TAC, since March?

Advantage, North Shore residents — and budding tennis players of all ages. TAC is a not-for-profit organization dedicated to education in the contemporary visual arts through classes, outreach programs, gallery exhibitions and events. A 70-year-old from Highland Park enrolls in a pottery class at TAC; a parent from Winnetka registers her 8-year-old son for a painting class at TAC; a 20-something from Lake Forest wants to learn all about animation in another class at TAC. 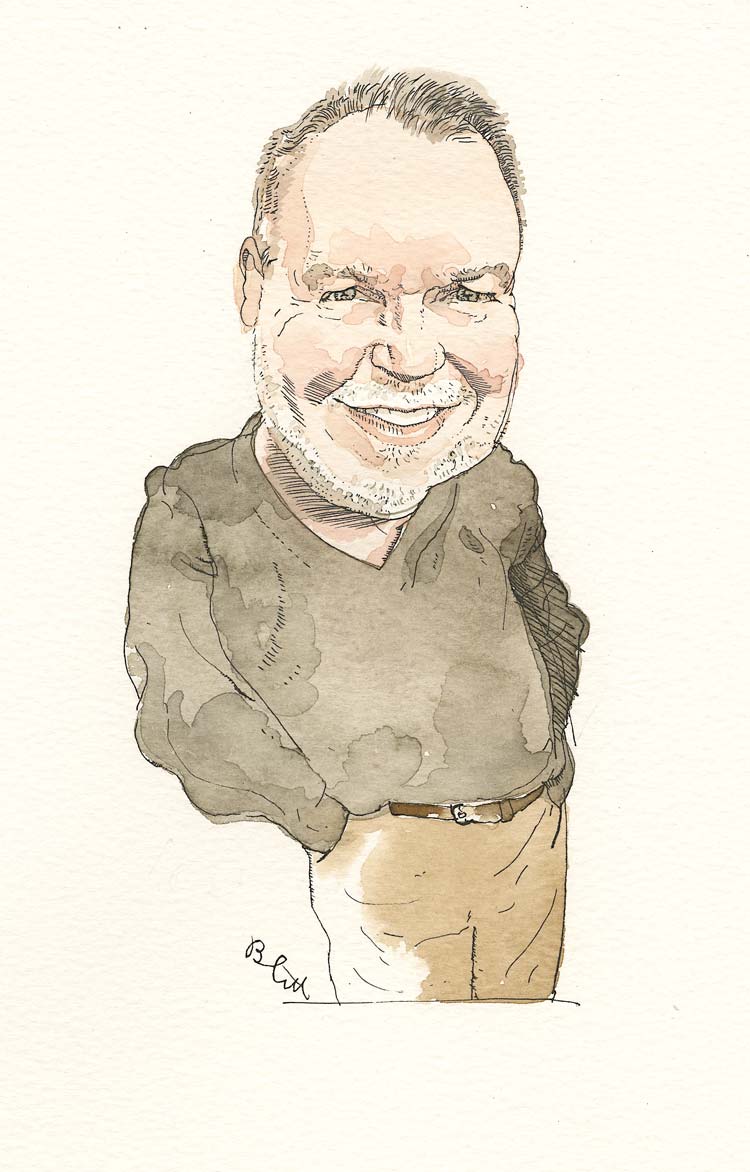 “My primary focus for 2018 is the idea of community,” says Lynch. “The Art Center is the heart of Highland Park. When people ask me about The Art Center, I first bring up the classes, the wonderful classes, and our passionate faculty members. My second day on the job, as I’m about to leave for home, I hear voices from a classroom. About 10 people were taking a ceramics class. One of them said to me, ‘Come in.’ So I did. I talked with the students. I got to see people recharging themselves through art.

The 13th of Tom and Sally’s 14 children, Lynch, who was born in New York City, attended St. Aquinas High School in Fort Lauderdale, Florida. He was a freshman when future tennis great Chris Evert was a senior at the school, and he hung out with the surfing crowd. Lynch wanted to be a writer in his first year at the University of Texas at Dallas, but he kept landing plum theater roles, including his very first: Romeo in Romeo and Juliet. Lynch also was the man in a one-man Hamlet run.

“I’m a big Shakespeare guy,” says Lynch, also an executive and entrepreneur coach, as well as the author of The Hamlet Secret: A Self-Directed (Shakespearean) Workbook for Living a Passionate, Joy-Filled Life (AuthorHouse, 2009).

“I was Cyrano for a national tour,” recalls Lynch, who earned his MFA in theatre at DePaul University. “Spoke my lines in French.”

A past two-year chairman of the Cultural Arts Commission-City of Highland Park, Lynch launched the Highland Park Cultural Arts Network (HPCAN), dedicated to mutual support for local cultural arts groups, facilitating partnerships and acting as a coordinator and conduit for arts information and resources.

“I’m into forming partnerships with businesses and other arts organizations,” says Lynch, who ordered coffee, oatmeal and a fruit cup at Country Kitchen. “The Art Center [born in 1960, as the Suburban Fine Arts Center] and other arts organizations in the area — we’re all in this together, generating ideas and sharing them, finding ways to best market ourselves. I called Ravinia Festival, one of the first phone calls I made [as TAC executive director]. I did so because I wanted to learn all about what the organization is doing. I mean, how lucky are we to have Ravinia in our community?

“My goal is this: Make our art center the best art center.”

TAC held its annual fundraising gala in early May. The spot-on theme was “Art Awakening: Making Art Available to All.” A couple of TAC’s future exhibits include “Musicality: The Interplay Between Music and the Visual Arts” (June 28-August 20) and “Food Glorious Food” (also June 28-August 20), with Jonathan Plotkin and Mary Barnes-Gingrich scheduled to serve as guest jurors for the former and Los Angeles-based contemporary artist Amanda Oleander set to judge works for the latter.

Lynch shares another anecdote about one of his non-actor students at the Suburban Fine Arts Center. This one featured a mother, the student, and her daughter.

“The mom acted out a scene at the center, with her daughter watching alongside others,” Lynch recalls. “I remember the daughter saying, ‘I was forced to come here.’ But she also told me, ‘I’m glad I’m here. It gave me the opportunity to see another side of my mom.’ ”