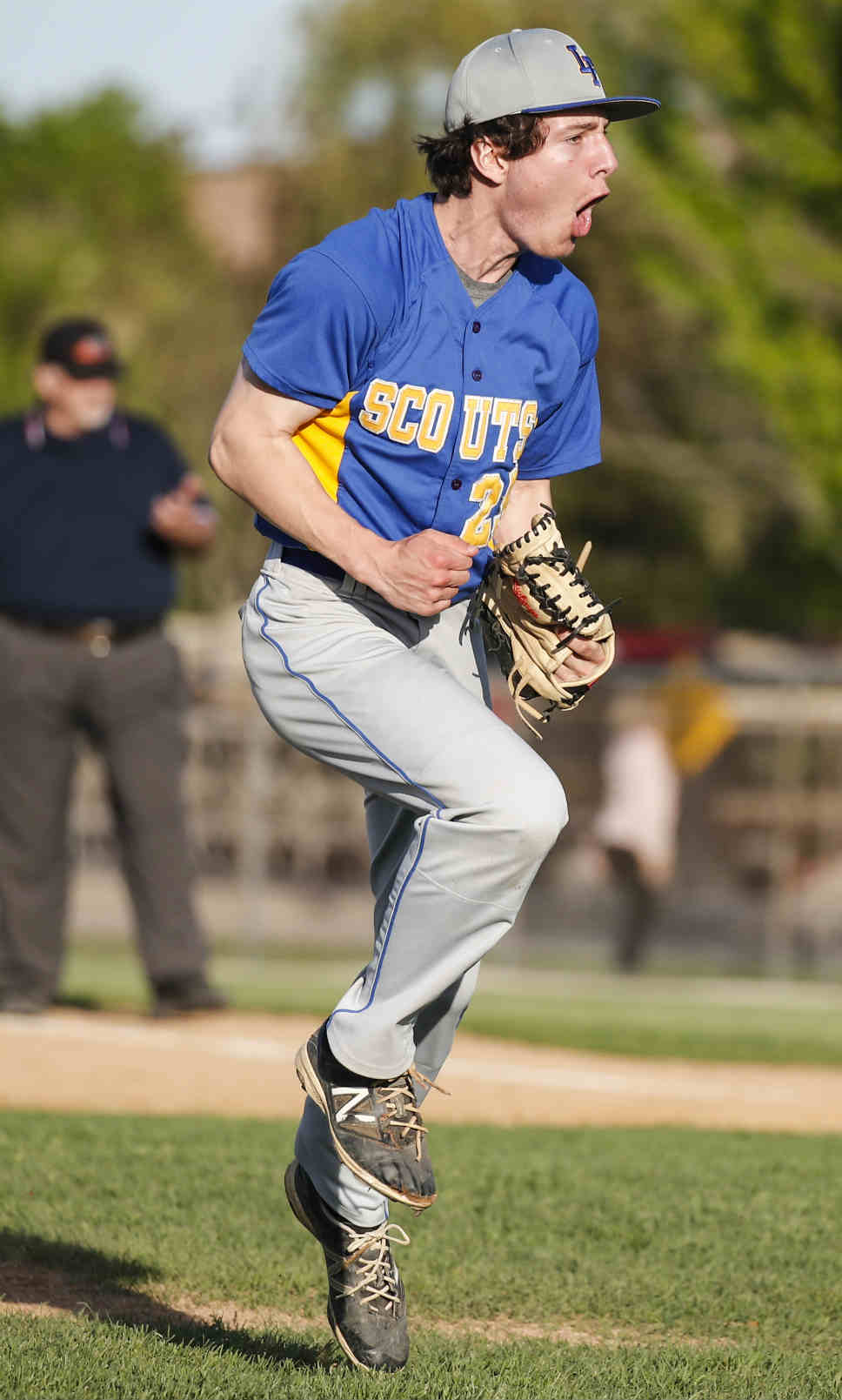 Lake Forest High School closer Will Woidat celebrates after earning a five-out save in his team’s 3-2 win over Glenbrook North in a regional semifinal game. PHOTOGRAPHY BY JOEL LERNER

And what da heck?

Why was Lake Forest High School relief pitcher Will Woidat bopping his head up and down on the mound in the seventh inning of a super tense, win-or-go-home baseball game?

It didn’t matter that the Scouts’ closer was in a bit of a predicament on May 24 in a Class 4A regional semifinal game at Glenbrook North, when he gave up a leadoff walk to GBN’s Evan Barnes — while trying to protect a one-run lead — in the bottom of the seventh inning.

And shortly after Barnes swiped second base, the plot thickened.

But there was Woidat — as the walk-up song for GBN’s David Rubin blared over the speakers — leaning in for a sign from catcher Brady Christoph and turning into a real-life bobblehead.

“I don’t know the song [or, who sings it],” said Woidat, a few minutes after earning a five-out save in Lake Forest’s 3-2 upset win over the fourth-seeded Spartans. “But it had a good beat.”

“Right there, that showed me that we had the right guy in at the right time,” said Del Fava, whose club advanced as a No. 13 seed in the St. Viator Sectional. “He wasn’t going to let the moment get to him.”

“When I’m on the mound, I like to be in control,” said Woidat, who worked out of a two-out, two-on jam by striking out GBN standout shortstop Chris Karasinski for the final out. “I like to get locked in. I want hitters to think that they have nothing on me. I want them to shake in their boots.”

Throwing mostly hard-cutting sliders, Woidat (0 runs, 0 hits, 3 Ks, 1 BB) also worked out of a sticky sixth inning by getting the final two outs and keeping it a one-run game.

It was his sixth save of the season. In fact, Woidat is a perfect 6-for-6 in save opportunities.

Lee was LF’s other bopper.

In fact, he was the Big Bopper.

“He hung a change-up,” said Lee. “Right down the middle.

“I was just looking for a pitch to barrel up,” added the senior left-fielder, who hit a flyball to the warning track in the top of the third inning.

GBN left-fielder Jake Kieffer tried to do the Mike Trout thing. But his gallant attempt to keep the ball in the park was unsuccessful.

“As I was rounding first, [LF first-base coach Bill San Hamel] told me to keep running,” said Lee. “So I picked it up a little —until I saw it go over the fence.”

The underrated Lee has been dealing with an right ankle injury throughout the season. He was out of the lineup for two weeks.

“I’ve had to play through it,” said Lee, playing in front of his grandparents, who reside in Atlanta.

“The ankle is feeling pretty good right now,” he said, with a smile.

Durbin came up with another sparking performance for the Scouts (19-13-1). The senior shortstop doubled and scored in the first inning. Then, in the sixth inning — after Lee’s home run — he laced a line-drive double to left-center field.

Then, after reaching third on a wild pickoff throw, Durbin scored the all-important insurance run on an opposite-field single by Golde.

Durbin’s other significant play was a defensive gem in the seventh inning, when he threw out Barnes at third base on groundball hit by GBN’s Ben Boeke.

“That was just an amazing play by Caleb,” said Woidat. “He’s so instinctive.”

Vallone showed his stuff on the mound. The sophomore southpaw worked into the sixth inning, allowing one hit while striking out five and walking one.

But the hit that he did give up was a loud one, when GBN senior right-fielder Chris Heywood sent a pitch into orbit — and way over the left-field fence.

“I can’t say enough about Michael Vallone,” said Del Fava. “He gives up a leadoff home run [in the second inning) and then boom, boom, boom. He retires the next three hitters. He did a great job of keeping his composure.”

Heywood has been blasting baseballs around fields all season.

“Chris is a big reason why our offense has been so good this season,” said GBN coach Dominick Savino. “He’s had a lot of big hits for us.”

The only other hit by the Spartans (23-9-2) was a bunt single by catcher Daniel Spencer in the sixth inning. Later in that frame, freshman first baseman George Korompilas hit an RBI groundout to bring in Karasinski (hit by a pitch).

Savino was impressed with the work turned in by his ace. The right-handed Garibaldi threw 10 or fewer pitches in three of his innings.

The Scouts will face either Warren or Highland Park in the regional title game at GBN on May 26 (10:30 a.m.). 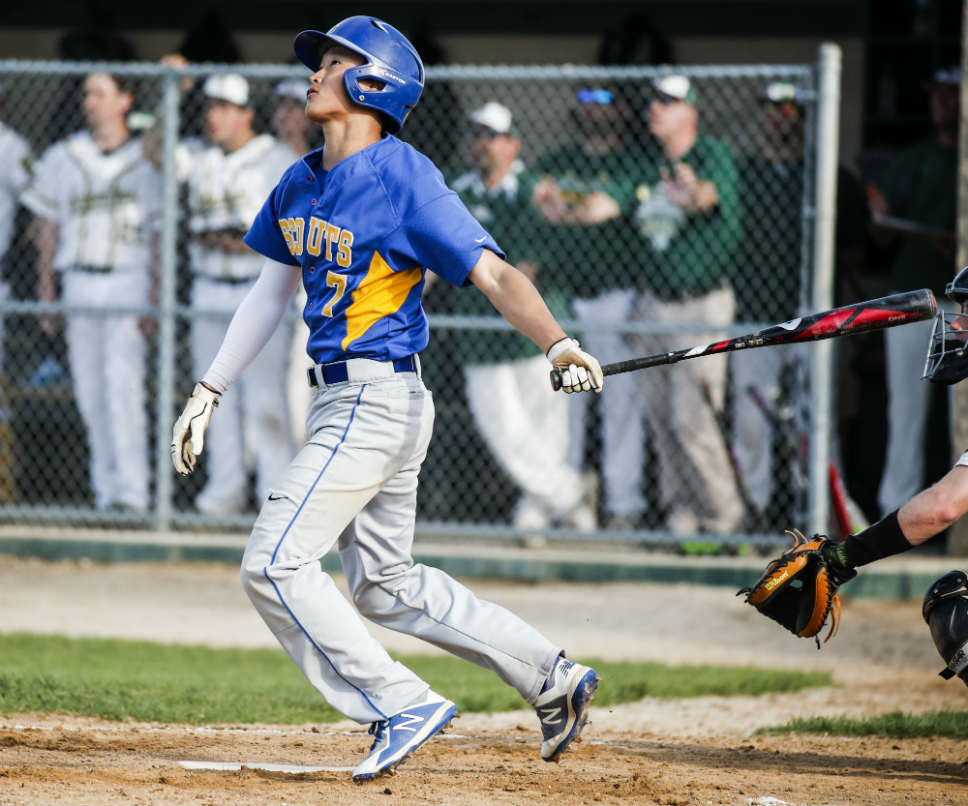 Ryan Lee of the Scouts watches as he hits a solo home run in top of the sixth inning to break a 1-1 tie. PHOTOGRAPHY BY JOEL LERNER 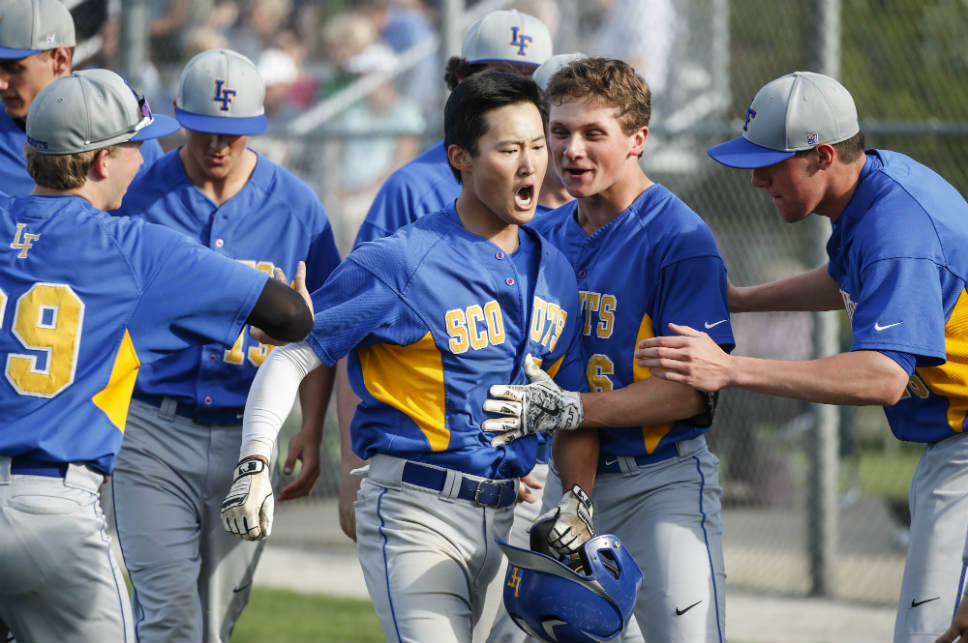 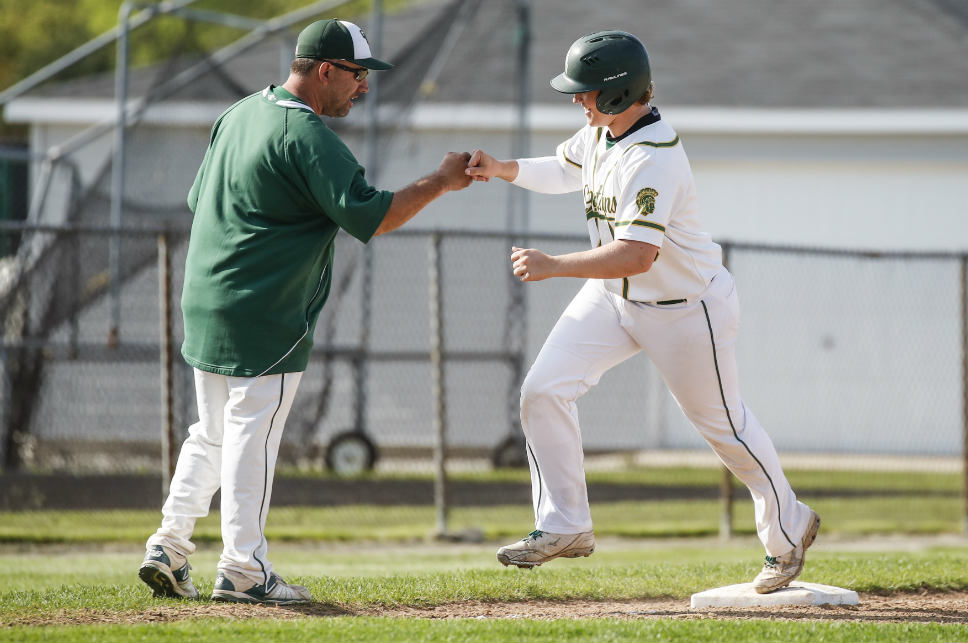 Glenbrook North’s Chris Heywood gets a pound-fist from head coach Dominick Savino after blasting a solo home run in the bottom of the second inning. PHOTOGRAPHY BY JOEL LERNER 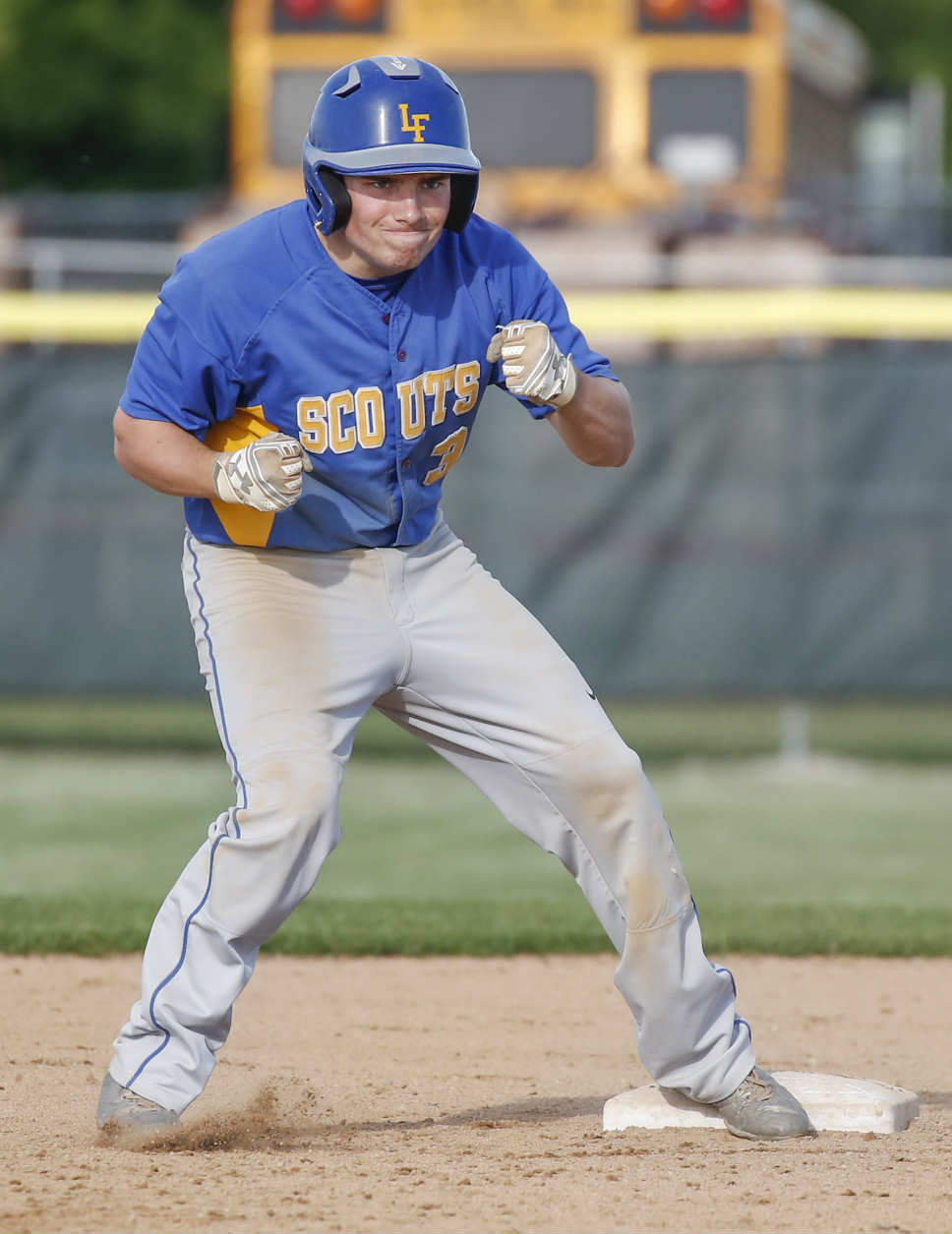 LF’s Caleb Durbin reacts after hitting a line-drive double in the top of the sixth inning. He had doubles and scored two runs in the 3-2 win. PHOTOGRAPHY BY JOEL LERNER 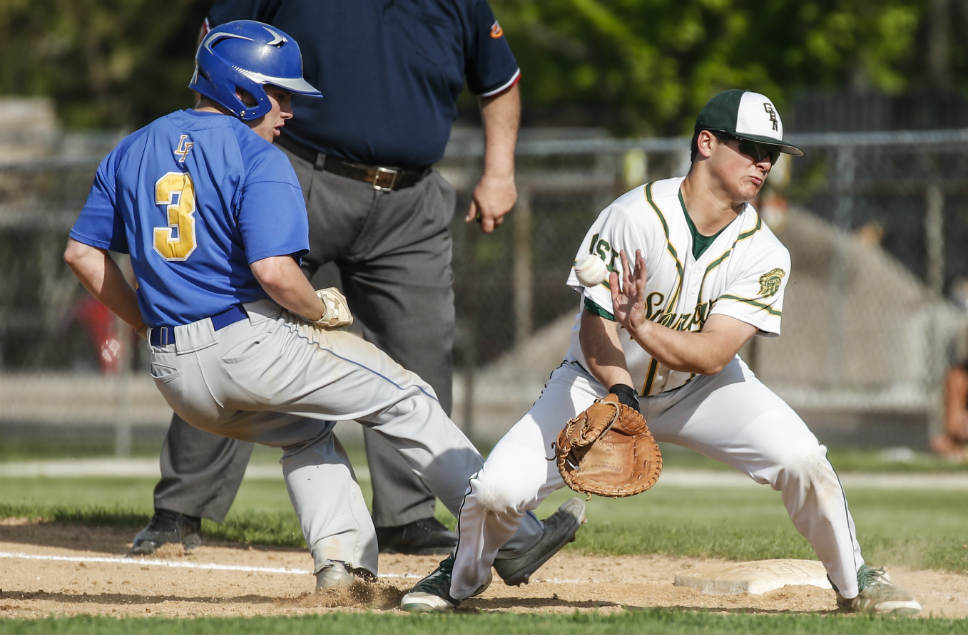 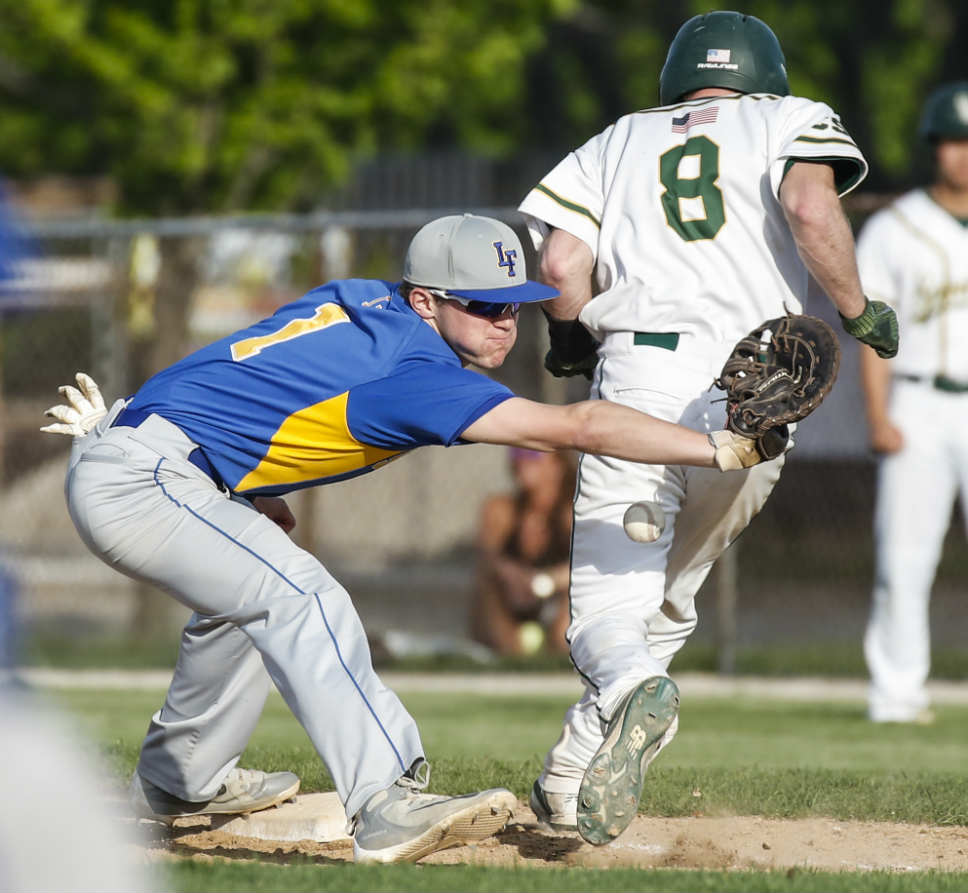 GBN’s Daniel Spencer (No. 8) beats out a bunt in the bottom of the sixth inning as LF first baseman Drew Golde tries to handle an errant throw. PHOTOGRAPHY BY JOEL LERNER 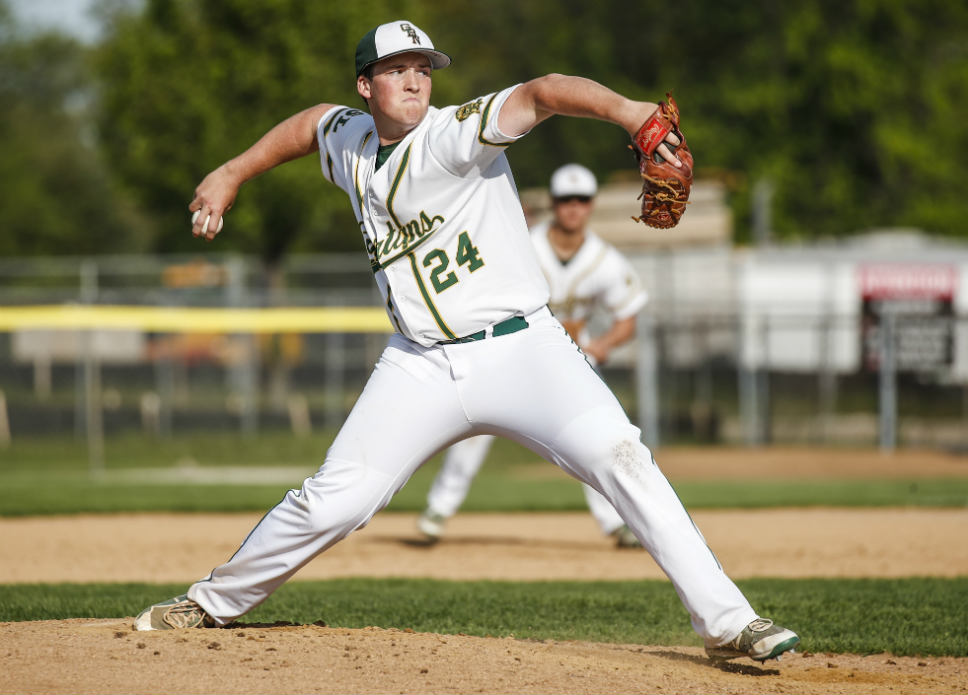 GBN’s Jack Garibaldi fires a pitch. He allowed only five hits in 5-plus innings. PHOTOGRAPHY BY JOEL LERNER 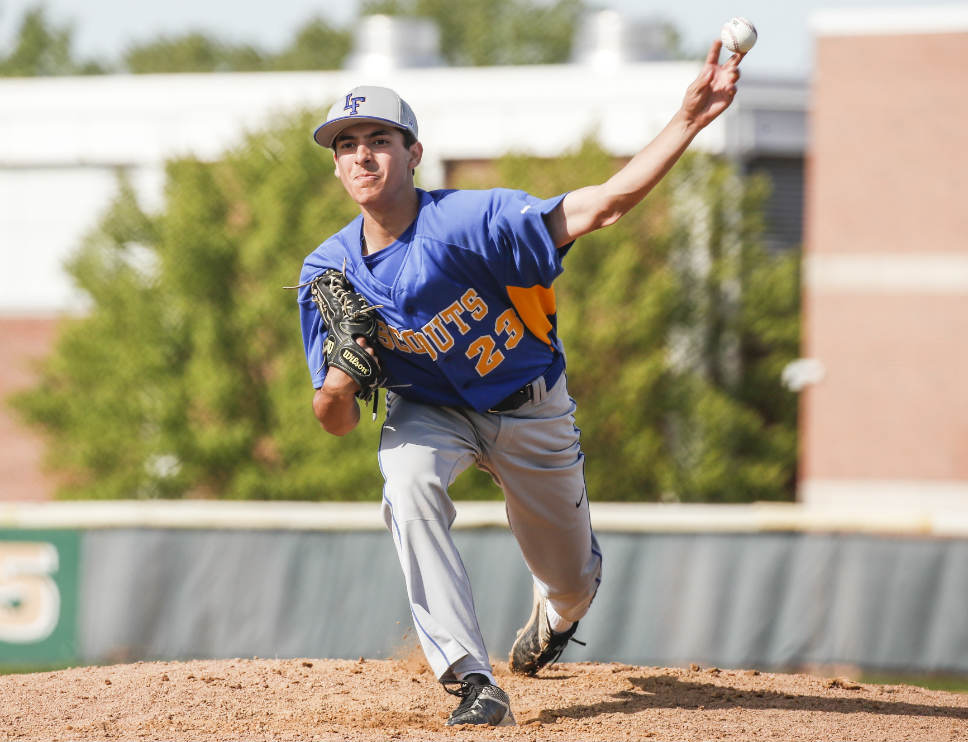 LF sophomore southpaw Michael Vallone comes to the plate with a pitch. He pitched 5.1 innings and earned the win. PHOTOGRAPHY BY JOEL LERNER 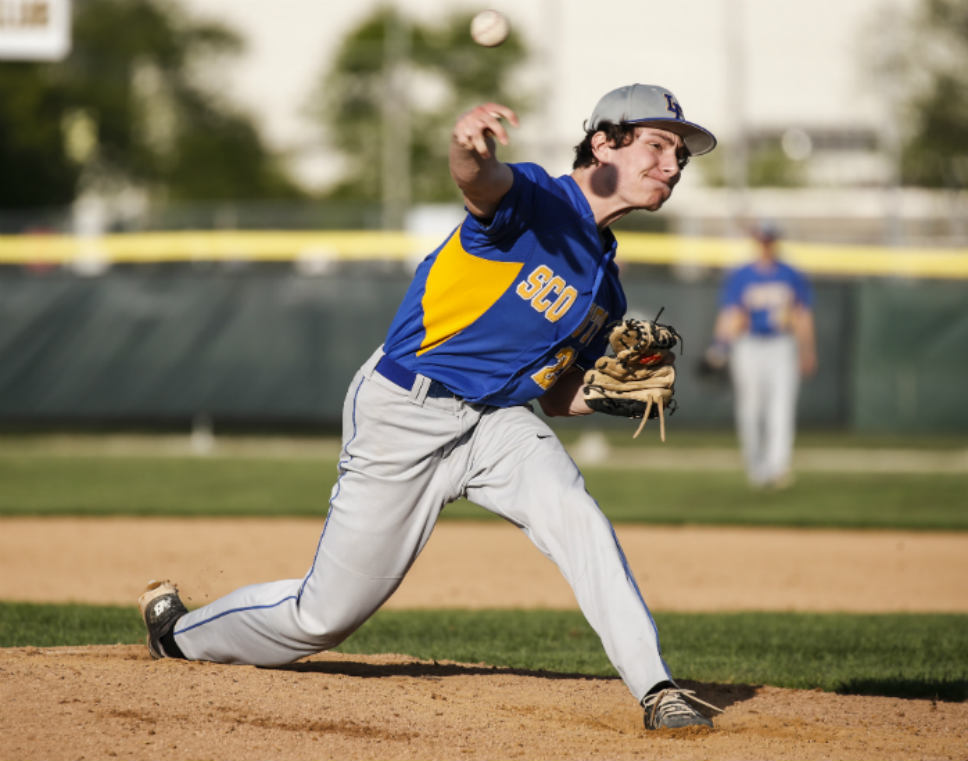 LF’s Will Woidat delivers a pitch in the seventh inning. PHOTOGRAPHY BY JOEL LERNER