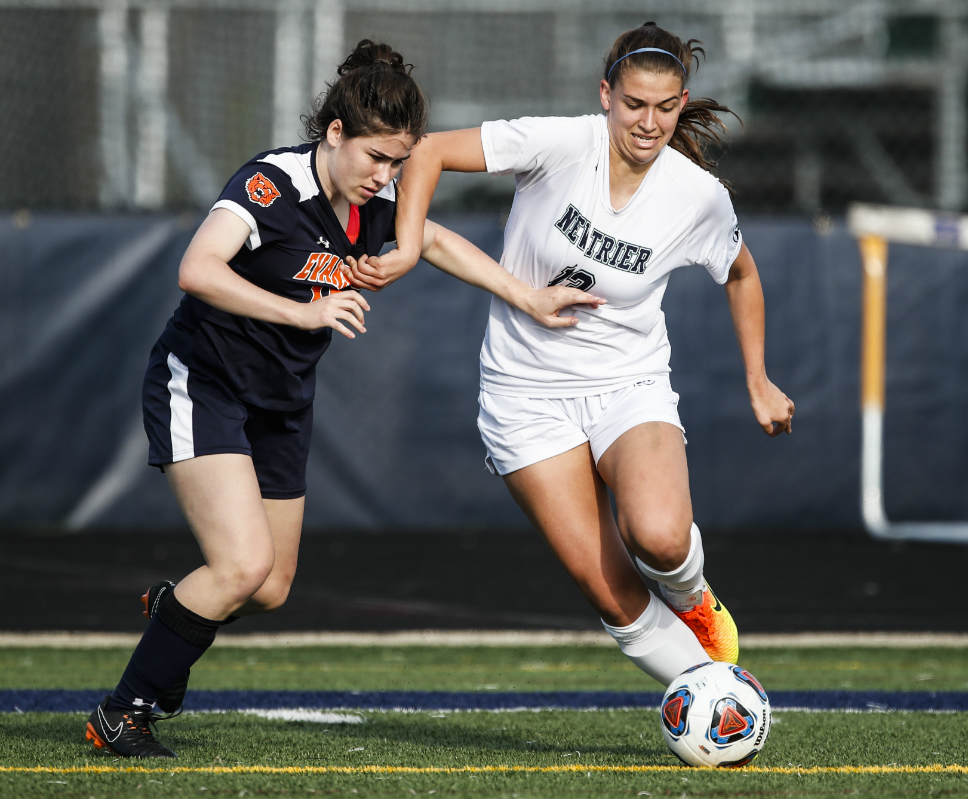 Nicole Kaspi made a confession.

Chess … is just not her favorite board game.

And yet, Kaspi, a multi-talented senior for New Trier, plays soccer like she’s playing a game of chess.

Thus, she is a perfect fit for a Jim Burnside-coached squad.

“We like our kids to be chess players,” said Burnside, following his team’s 2-1 victory over Loyola Academy in the Class 3A sectional final at Glenbrook South on May 25. “We want them to be thinking about their next move, their defender’s next move and their teammate’s next move.”

Thinking ahead? Not a problem for Kaspi. The cerebral forward, who will play her college soccer at the University of Chicago, displayed some of her amazing anticipatory skills throughout the game.

She won’t dazzle you with top-end speed.

Instead, Kaspi “makes a living” on the soccer field by having that sixth sense.

Crediting her dad, Ersin, she simply has developed a great feel — and mind — for the game.

Plus, it doesn’t hurt to possess fancy footwork.

And, let’s not forget this: Big Goal Nicole, if you will, is at her very best on the big stage.

So you can understand why Kaspi didn’t push the panic button, when the Trevians fell behind 1-0 to a red-hot LA team with 31:47 left in the first half.

“Their goal was not a setback,” said Kaspi. “It was more of a motivator.

“We just got back into what we were doing,” she added. “Nothing in my mind changed.”

After tipping her cap to her longtime friend and FC United club teammate Cate Shellenback, who scored on a beautiful header, Kaspi simply went back to work.

Less than two minutes later, Kaspi came up with the equalizer.

And then, with 10:41 left in the second half, Kaspi scored what turned out to be the game-winner for New Trier, which will face Carmel Catholic in the Evanston Supersectional on May 29 at 6:30 p.m.

Loyola Academy co-coach Scott Ackman was hardly surprised that Kaspi was the one who came up with the decisive goal.

“Nicole’s got a knack for that,” said a gracious Ackman. “I’ve been watching her play soccer since she was eight years old.”

Kaspi, who also scored a huge goal in New Trier’s 2-0 win over Glenbrook South in last year’s sectional semifinal win at Glenbrook North, now has 16 goals and five assists on the season.

The game-winner was set up by sophomore Emma Weaver, who navigated through heavy traffic down on the left side. She then sent the ball towards the LA goal — and that’s when Kaspi took over.

“Coach always tells us to be optimists on offense,” said Kaspi.

And with Weaver on the other end of things, Kaspi knew that an opportunity might be coming her way. She got the best of a crowded scramble situation.

“I just had to score it for my team,” Kaspi said.

Her first goal, with 30:11 left in the first half, was a little more textbook. Teammate Nicole Basil put the play into motion, when she made a steal near midfield and fed it to Kaspi.

Kaspi did the rest. A basketball player in the winter, she made a beeline to the LA goal and blasted a shot under the diving hands of LA goalkeeper Maggie Avery.

Shellenback’s goal, assisted by Sammie Holton, with 31:47 left in the first half, was equally rave-worthy.

“We might’ve gotten a little too overjoyed by it,” the coach added. “Maybe a little over-excited.”