LAKE FOREST – Metra appears to be reversing its proposal to add a three-mile-long freight train holding track on its Milwaukee-District North line in Lake Forest.

Rather than expanding the rail line, Metra instead recommends investing in its existing system, according to a May 18 letter from CEO/Executive Director James Derwinski to executives of the Wisconsin Department of Transportation and Illinois Department Transportation.

What this new, modified proposal means for other North Shore towns has yet to be determined. Northbrook and Glenview administrators told DailyNorthShore they are evaluating Metra’s letter.

“We remain opposed to the Amtrak Hiawatha expansion project (as proposed), are reviewing the information from Metra, and will have additional responses in the near future,” Don Owen told DailyNorthShore.

Lake Forest Mayor Rob Lansing summarized the details of Metra’s letter in an email to constituents and reporters:

On May 23rd, Lake Forest Mayor Rob Lansing received a letter from Metra announcing its request to amend the third main track proposal on the Chicago-Milwaukee rail line in Lake Forest.

Metra, the owner and operator of the railroad bed from Rondout to Chicago, has determined upon further analysis a third main track is not needed in Lake Forest for its current operations, nor for the foreseeable future.

Metra indicates that it is focused on investing in its existing system to “work towards a state of good repair,” and is not financially prepared to actively pursue major capacity expansions for decades to come. Mayor Lansing reports, “This announcement is consistent with several conversations the City Manager and I have had with Metra in recent months.”

In the letter, Metra proposes rebuilding the existing third track 2500’ south of Rondout for passenger train use to move trains through the Rondout interlocker to permit simultaneous movement on the corridor’s two main tracks. Additionally, the proposed universal crossover positively impacts the reliability and fluidity of all rail operations in the corridor and likely minimizes the need for a third track.

“On behalf of The City of Lake Forest, I would like to thank James Derwinski, CEO and Executive Director of Metra and his senior staff for their forthright and honest appraisal of Metra’s operation and funding priorities superseding the third track proposal, and proposing community-respectful and cost-effective ways to extend railroad safety and efficiency. The City also wishes to thank the many parties who expressed concerns regarding the third track proposal. Be assured that The City of Lake Forest will continue to be engaged in monitoring the service and safety of regional rail transportation,” states Mayor Lansing.

Click here to read the Metra letter to WISDOT and IDOT: 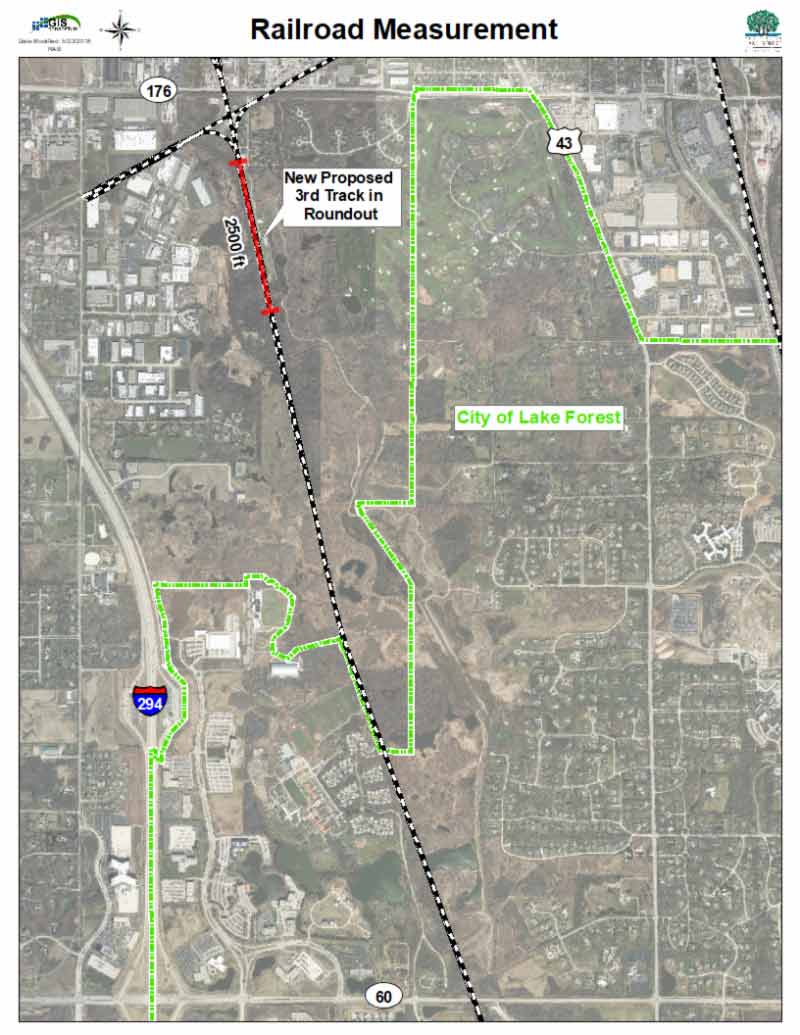 Railroad measurement; image provided by the City of Lake Forest.