The following is the text of a statement sent to the Lake Bluff School Board May 22, 2018:

Is $140,000 a meaningful sum to Lake Bluff tax payers? How about half a million? $1 million? $80 million? I expect all taxing bodies to be good financial stewards of the funds provided to them. In the case of Lake Bluff schools, that garner 40% of a typical Lake Bluff tax payers tax bill, I expect exemplary care be shown. All the amounts I just mentioned are meaningful to me regardless how insignificant some may sound against an annual school budget approaching $20 million.

In June 2016, Lake Bluff was confronted once again with the ugly truth that a teacher in the district, Charles T. Ritz, was a child sexual predator throughout his 10+ years of employment. This prompted many responses from a variety of parties. Law enforcement took notice and opened an investigation that resulted in the teacher, Charles T. Ritz being charged and convicted via a guilty plea in August 2017. Victims came forward to the school board to share very difficult stories of how this teacher impacted their lives—not 30 or 40 years ago, but how that impact lives with them today. The victims presented you with a petition, that now has more than 1,000 signatures, which outlined a series of steps they asked the board to consider. The local media, including Chuck Goudie’s I-Team at ABC Chicago, have provided extensive coverage and investigation that was likely critical to the conviction of Charles Ritz and raising awareness of the issues.

Your response, as best I can tell, has been typical to the response of other school boards facing similar circumstances. You have held various closed door executive session meetings to discuss the matter. You have consulted legal counsel. You have researched insurance related issues. You have published a few public statements that while well intended, have been viewed by the victims as having fallen short of expectations in the areas of empathy and an apology. In the first 18 months of the ordeal, there was one meeting (July 2017) that included victims and members of the school board. This type of response is understandable as the school board must act to protect the school district and the taxpayer. However, while typical and understandable, this approach has been viewed by victims as placing the protection of the institution well above the interests of the victims that the very institution harmed. The conviction of Ritz and even a cursory review of the publically available investigation files related to the case clearly shows guilt. Further, those same files highlight steps taken in the 1980s by the school board and the administration as predictably being focused on protecting the institution rather than the victims.

To date, the expenses of the school related to the Ritz matter have approximated $140,000. That seems to be the price tag of the approach employed to date. That approach has yet to address the issues raised by the victims; issues that until recently have not included threat of legal action or a request for financial consideration.

In April 2018, 4 living victims and the children of a deceased victim, have filed suit in court. This has changed the narrative as victim requests have now been expanded to include unspecified monetary damages. The emergence of a lawsuit is as predictable and understandable as the school board strategy outlined above. They are inextricably linked. This is the path most every case of sexual abuse at a school follows. The primary end result I see is the only ones being enriched here are the school’s lawyers and the firm hired to provide public relations advice. If the process continues to follow the typical path, the process will be prolonged and expensive. Is there really a different outcome one can find when the teacher has already been convicted? As legal saber-rattling progresses, it is reasonable to expect that the expenses of Lake Bluff schools related to this matter will exceed the recent run rate seen to date. $250,000 of legal and PR expenses before inevitable substantive discussions take place is a real possibility. How does that protect the institution? The taxpayer? And most importantly is this the process we think victims of sexual assault should be confronted with?

I am a victim of this teacher, but am not one of plaintiffs in the recently filed lawsuits. I believe it is time for Lake Bluff to stop being typical and become a pioneer that charts a bold new course in how to respond to these situations. As a Lake Bluff taxpayer, I do not want to see more money that should be used to improve the quality of education in Lake Bluff being siphoned off to pay for legal strategy and PR advice. I intently watched the press conference hosted by the plaintiffs last month. It was clear to me that two themes dominate their agenda. First, is a public statement from the Board that expresses empathy, compassion and respect for victims as well as recognition that things could have been handled better when the situation first arose. Second, is a desire for there to be a review of current policies and procedures in place related to how cases of sexual abuse are treated. The desire here seems to be to establish best practices and ensure victim rights are addressed. When it comes to the safety of students, acceptable, or dare I say it, typical practices and policies are just not good enough.

There is an undefined financial component to the plaintiffs’ case. Again, content of the press conference included statements that this is not about the money. I have no idea what it will take to satisfy this request, but the best way to find out is to get together and have the proverbial cards put on the table. My experience tells me the quicker this is done and the more substance that is put toward a public statement and a commitment to review policies and procedures, the lower the price tag will be. Is it possible the total financial component could be less than what taxpayers will pay from today until the typical process arrives at settlement discussions? The answer to that is you won’t know until you try.

Bold steps like this and stepping away from the typical path takes initiative. I suggest the plaintiffs have already done enough initiating to engage in a dialogue. It is time for you to take a step forward. Delays from now become expensive. It is about the money and it started being about the money when the first tax dollar was spent in June 2016. It is time for it to become about people and the safety of children. The recent Lake Zurich case was settled for $399,000. The Maine West case was recently settled for a $1 million. If one believes cases involving acts committed decades ago are cheaper to settle, consider the recent settlement of the case at The Hawaii Kamehameha School where 32 victims received $80 million for abuse that took place between 1958 and 1985. (Additional cases are listed on the following page).

The path forward is not novel. It really embraces the lessons we learned in grade school. If you did something wrong, say you are sorry as soon as you can do so appropriately. If someone has ideas to make something better, they are worth listening to. It is simple and hard at the same time. This is an unpleasant part of our village’s history. We can’t undo what was done, but our response, even 40 years later can define the qualities that I know exist in Lake Bluff. Let’s show that good can come from even the most evil events. Let’s stop making it about the money and start making it about making our community safer for our children. 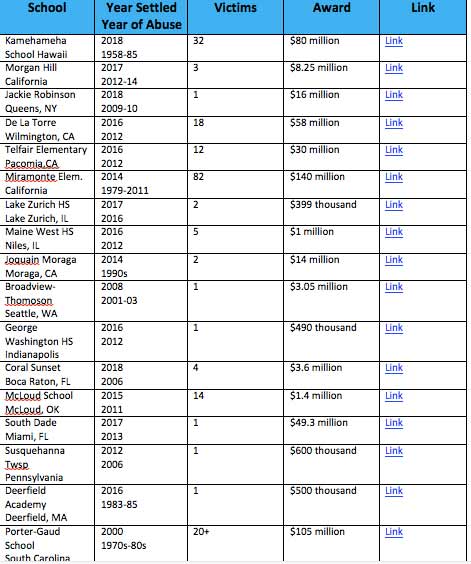