On a warm spring or summer day on the North Shore, it can often feel like all of humanity is out walking a dog.

It’s true that Chicago’s leafy northern suburbs are a paradise for canines. Between the lake, the beach, and a plentiful supply of off-leash dog parks, there’s ample space for rambunctious pups to run, fetch and wag their way to tired contentment.

At Winnetka’s off-leash dog beach at Centennial Park on Sheridan Road, a warm, sunny morning can bring as many as 10 to 15 dogs and their humans out for 30 minutes to an hour or more of playtime, a ritual many dog beach regulars consider an essential component of their daily routine.

Winnetka resident Annie Ross takes her 9-month old mini-Australian Shepherd, Nellie, to the dog beach almost every morning – rain, snow or shine. Bringing Nellie to the beach, said Ross – even on a bitterly cold morning – is a necessity for them both.

“It’s her social time,” said Annie, who chatted amiably with other dog owners while tossing balls to Nellie. “It’s my social time, too. By coming down here each day, winter didn’t seem quite so daunting.”

Nellie is joined most beach mornings by her four-legged pals, Ryman, Goldie, Bear, Pippa and Henry.

In the years before Pippa – a German Shorthaired Pointer – and Henry – an English Springer Spaniel – relocated to Winnetka from the United Kingdom in 2015 with owners Caroline and Lee Betsill, the two dogs lived totally off-leash, running alongside the Betsills’ horses and wandering freely on their property. The Betsills chose their home, in part, for its close proximity to Centennial Park.

“Our realtor told us, ‘you’ve got to get a beach pass and get yourself down there,’” said Caroline. 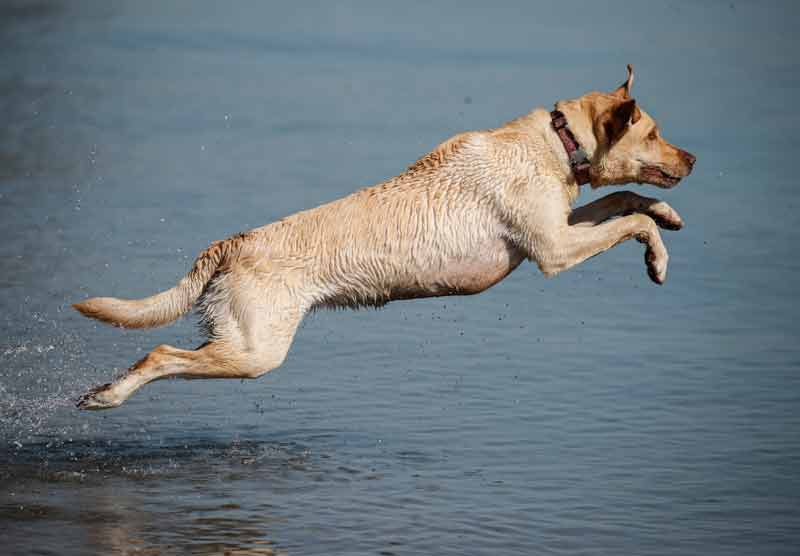 Goldie the Yellow Labrador jumps in the lake at Centennial dog beach in Winnetka, above, after doing some digging, as shown in the photo below. PHOTOGRAPHY BY JOEL LERNER 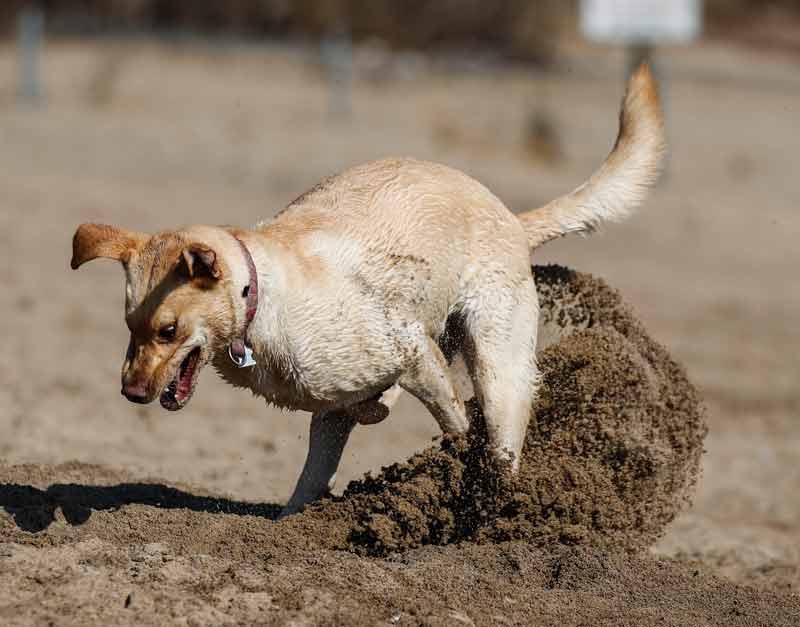 “To be honest, if Goldie doesn’t get the proper exercise each day, I’m in trouble,” said Flatt. “I come home to find a rug or chair chewed in my kitchen.”

The Winnetka Park District (WPD) maintains strict control over access to Centennial Dog Beach, requiring that owners produce proof of current vaccinations and a village dog license before issuing a key entry card to the enclosed area. Roughly 375 dog passes are issued by the WPD each year. Like most North Shore dog parks, the WPD charges a hefty fee for non-residents. Locals pay just $40 per one-year pass versus $180 for non-residents.

In addition to staging a community-wide clean up every May, the WPD’s maintenance crew regularly collects trash and lake debris from the beach throughout the day. Pass holders are expected to abide by a publicly posted list of rules and regulations, including cleaning up their dog’s waste. In the summer months, the WPD turns on a water hose stationed inside Centennial Park to aid in cleaning sandy, muddy pups.

Further south, at Wilmette’s Gillson Park Dog Beach, the same rules apply, although access is not regulated through a key card. The beach can be accessed through a locked gate, but off-leash dogs are required to display a permit tag on their collar. 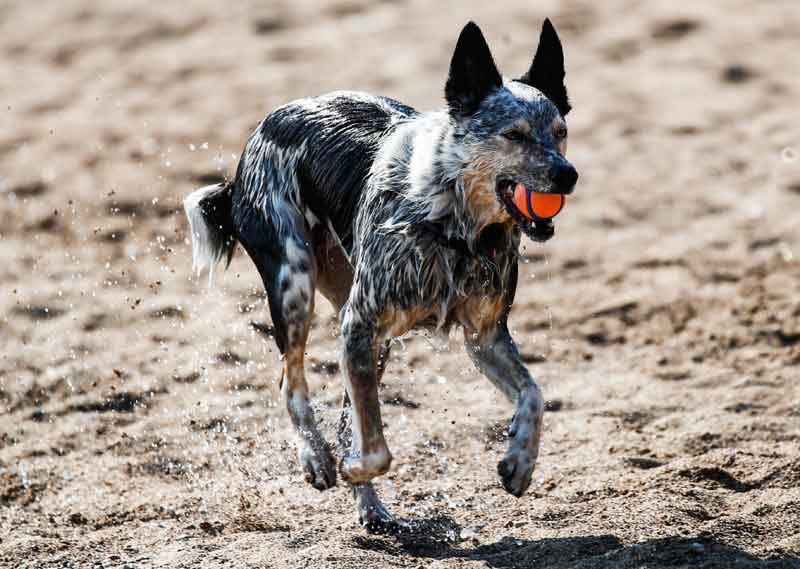 Ryman retrieves a ball at Centennial dog beach in Winnetka. 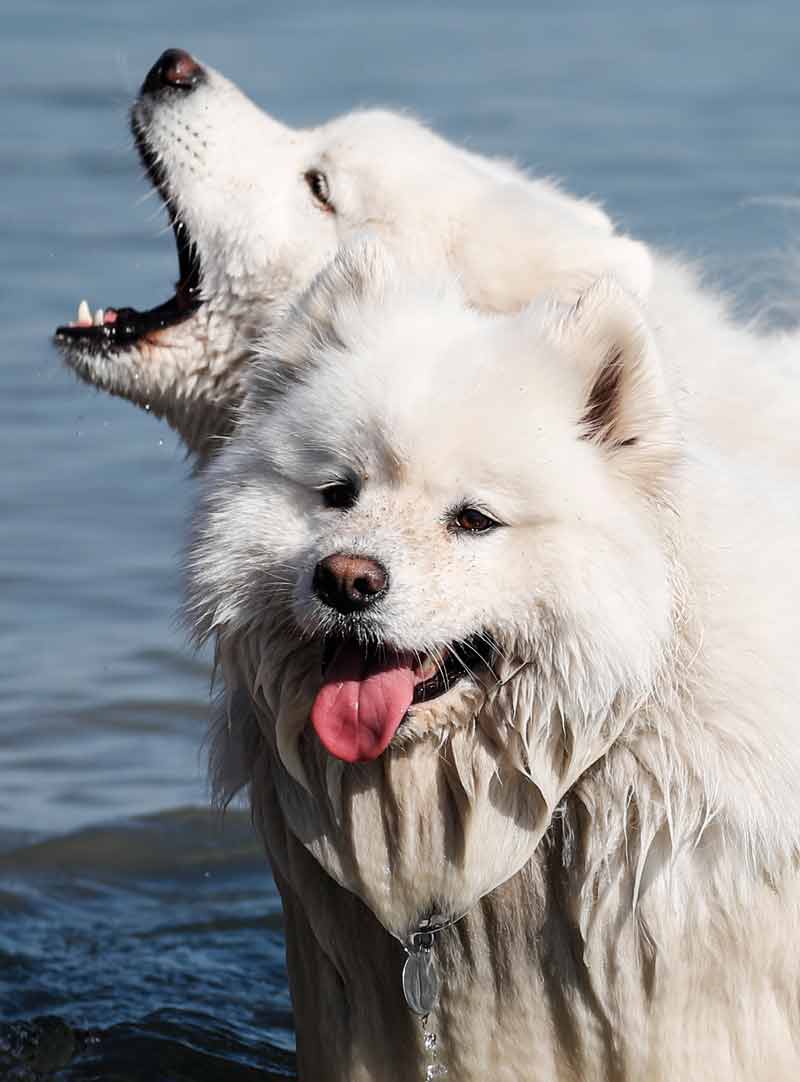 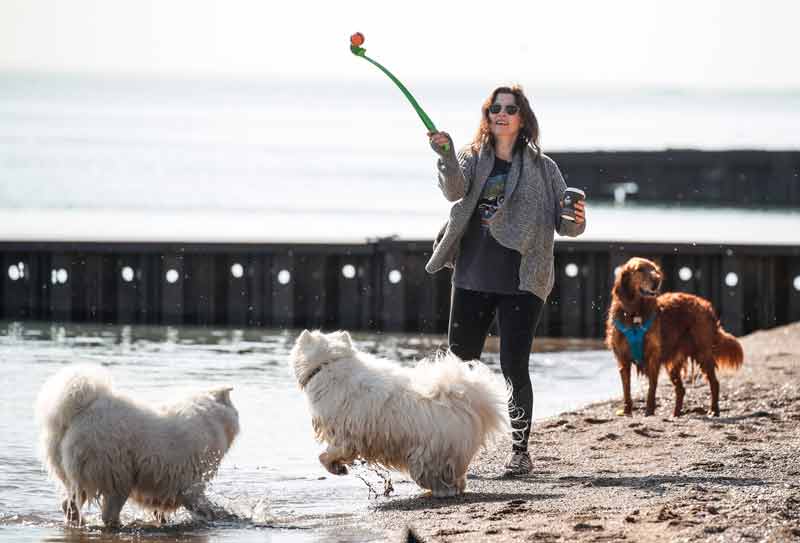 Ashley Vaughn Bransfield of Winnetka throws the ball to a couple of dogs at Centennial dog beach in Winnetka. PHOTOGRAPHY BY JOEL LERNER/JWC MEDIA 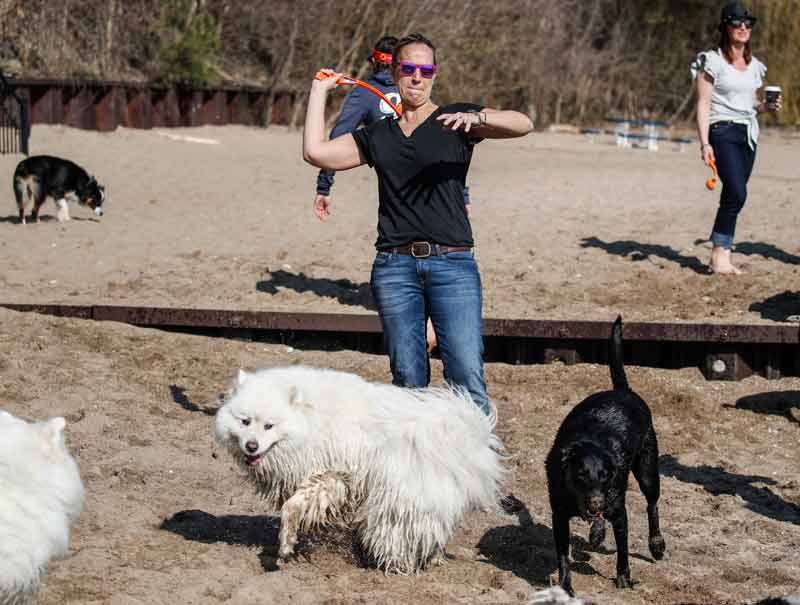 Suzy Eilers of Winnetka tosses the ball at Centennial dog beach in Winnetka. 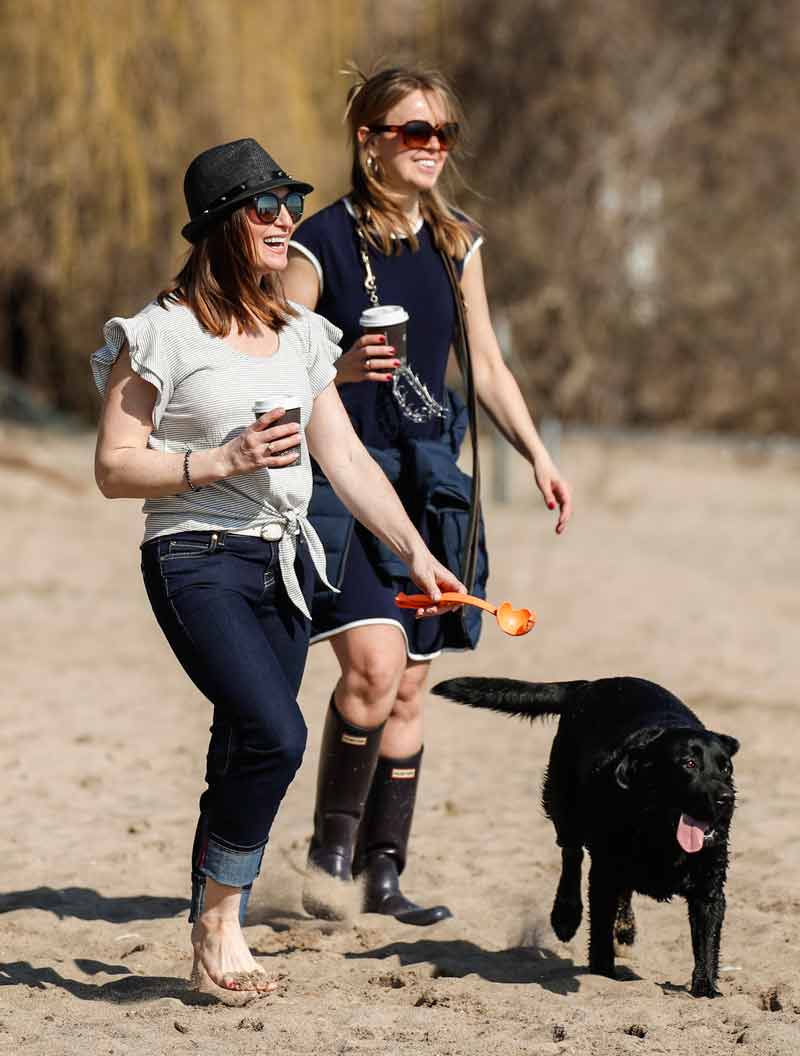 At Glenview’s Community Bark West’s 6-acre off-leash dog park, located off Zenith Drive inside the vast 95-acre Community Park recreational complex, access to a large, fenced-in grassy field is controlled with magnetic key cards issued by the Glenview Park District. The park district issues an average of 550 passes each year, currently priced at $60 for residents and $138 for non-residents.

“She loves to run and jump and the yard just wasn’t enough,” said McCleery. 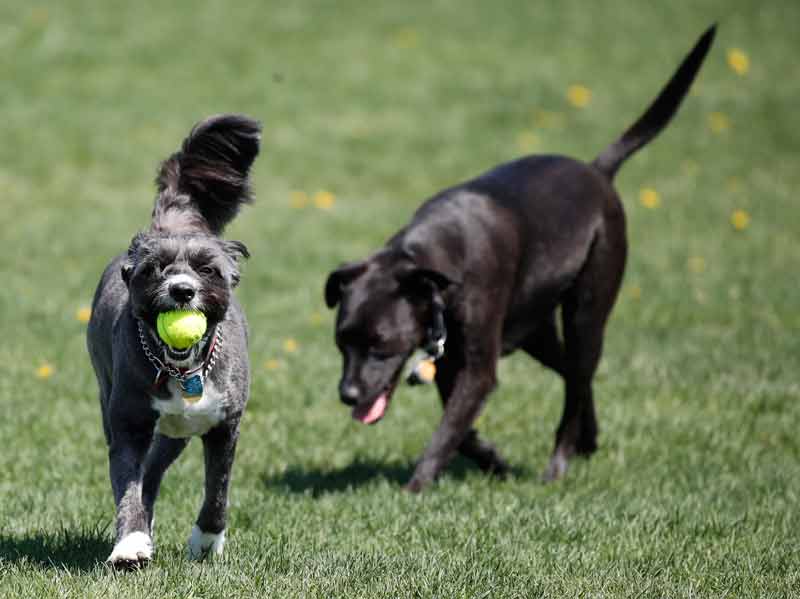 Grertie runs with the ball at the Community Bark West in Glenview. Joel Lerner/JWC Media 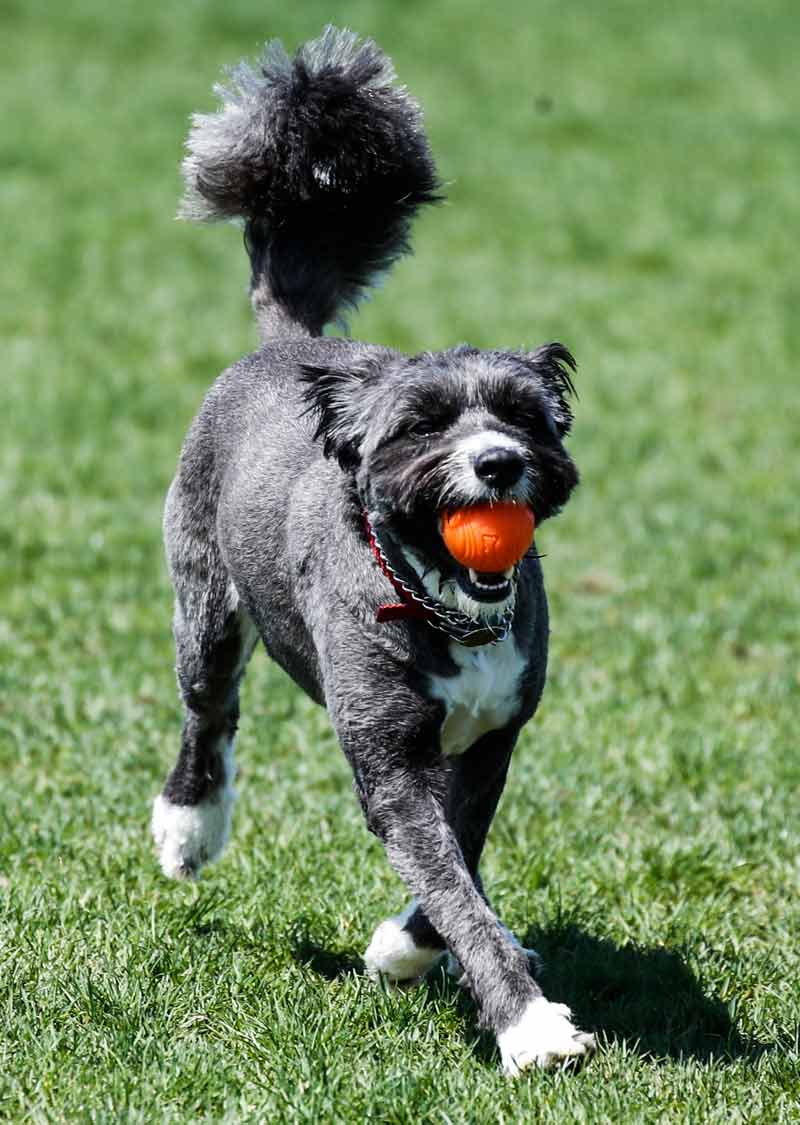 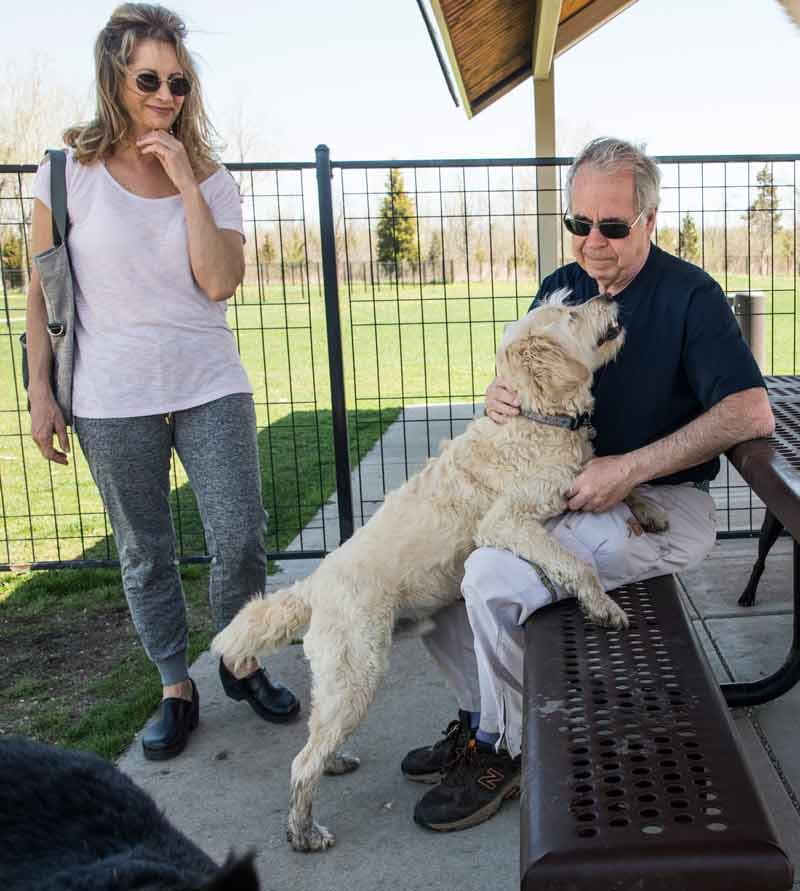 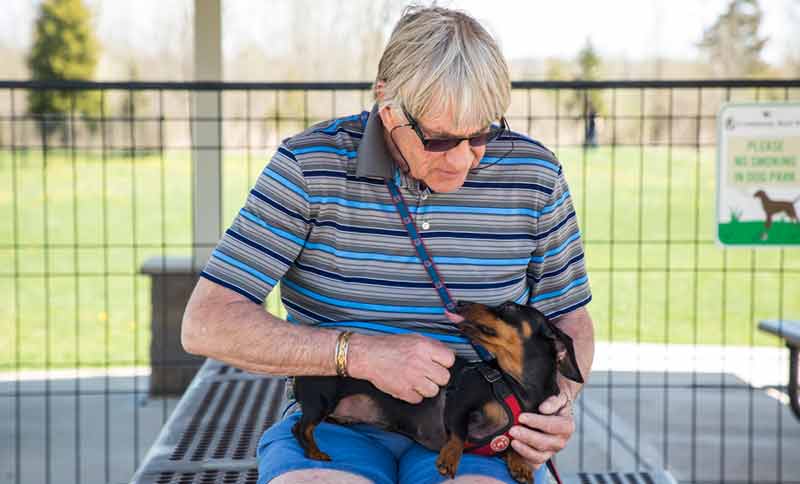 John Mooney and his Dachshund, Dory, both of Glenview, at the Community Bark West in Glenview. Joel Lerner/JWC Media 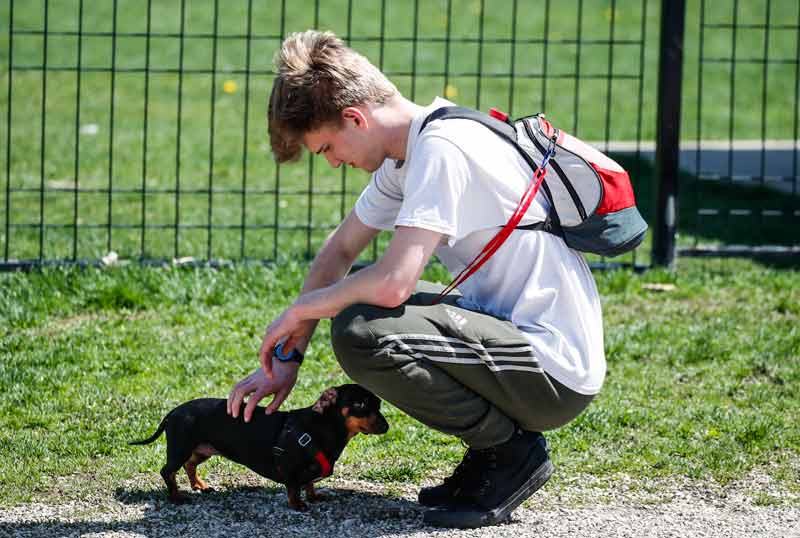 Van Cortez of Glenview with Dory the Dachshund at the Community Bark West in Glenview. Joel Lerner/JWC Media

McCleery and Gertie often socialize with other dog park regulars, including Cindy Sunkel and her 4-year old Golden Doodle, Ralph, as well as John Mooney and his 3-year old Dachshund, Dory, who has a penchant for escaping from the family’s backyard.

Bringing Dory regularly to a park where she can roam freely, said Mooney, has helped curb her appetite for illicit adventure.

“She still has wanderlust, but it’s gotten better,” said Mooney.

Amenities at Community Bark West include a separate fenced area for smaller dogs, a covered picnic area, a water hose and water fountain (with separate spouts for both dogs and humans) – plus metal water bowls that remain at the park year round.

“The dogs have their preferences,” said Mooney. “Some like the hose, others insist on a bowl. To be honest, the dogs are as quirky as their owners.”