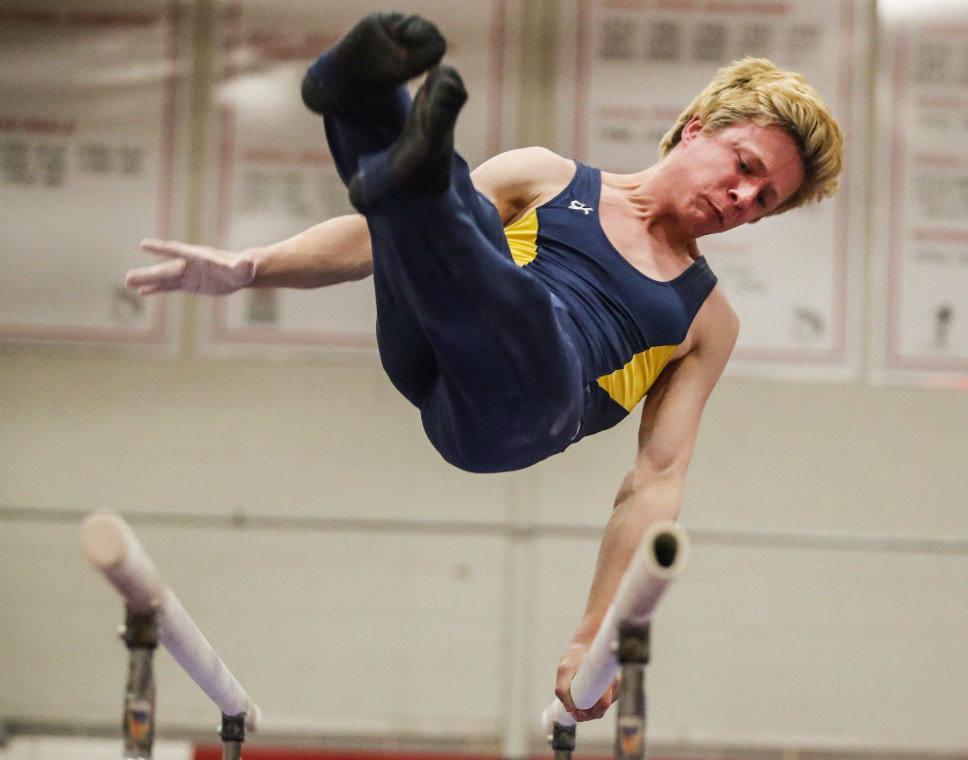 A young man who wants to hit it big in Silicon Valley someday reached a peak at the state boys gymnastics meet last weekend.

Pauker’s horse routine featured a Tong-Fei, a challenging ‘D’ move in which the competitor executes a pair of circles while traveling the length of the apparatus.

None of the event’s other nine finals qualifiers attempted it.

“Learned it two years ago,” said the 5-foot-8, 140-pound Pauker, a Wilmette Gymnastics Club member since 2013. “The key to the move is using momentum to swing your body around.”

Fifth on the event at a club regional meet this spring, Pauker would not have competed at club nationals had he qualified to do so because the national meet and the high school state meet were scheduled for the same weekend.

Pauker, who had also advanced to the state finals session on parallel bars (10th, 8.95) and vault (12th, 8.5) last weekend, became the first Titans boys gymnast to medal at state since Jeremy Fine finished fifth on vault in 2015.

“Lucas remained loyal to our program,” said Titans boys gymnastics coach Brandon Tucker, a former Glenbrook South and University of Illinois gymnast and a current GBS science teacher. “He was able to be loyal to his club team, too. He was strapped for time this spring, with his gymnastics, with his academics and with his commitments to several activities at school, and I have a strict attendance policy. But Lucas still showed up when he was supposed to show up for us.”

Pauker, a four-time state qualifier, had advanced to the event finals at state only once (2017, in one event) before last weekend.

“We’re thrilled he made it out of preliminaries in three events this year,” Tucker said. “We would have been happy with two or with one.”

On the meet’s first day, May 11, Pauker placed 15th in the all-around with a 51.75; the Model UN and math team member had entered the meet ranked 19th among state qualifiers, based on sectional scores.

“I’m really happy with my performance today,” Pauker said after receiving his medal. “Right now I’m taking it all in, savoring this. I tried to be as relaxed as possible [during his finals routine].

“It’s taught me a lot, the sport of gymnastics has. It’s taught me perseverance — something you have to have if you want to overcome the mental block that usually comes while learning a new skill. I worked through challenges, dealt with what happens when you find yourself out of your comfort zone.”

There won’t be anything routine about what awaits Pauker in college.

But he can’t wait to sit in his first class at Stanford and nail (no chalk needed) that first assignment or that first test.

“My hope is to take advantage of the opportunities out there in Silicon Valley.”

Notable: Almost as impressive as Lucas Pauker’s fourth-place state effort on pommel horse was his 9.2 preliminary score on the parallel bars. It represented the lowest mark among finals qualifiers in the event, but it also supplanted the Glenbrook South senior’s previous personal-best mark in the event.