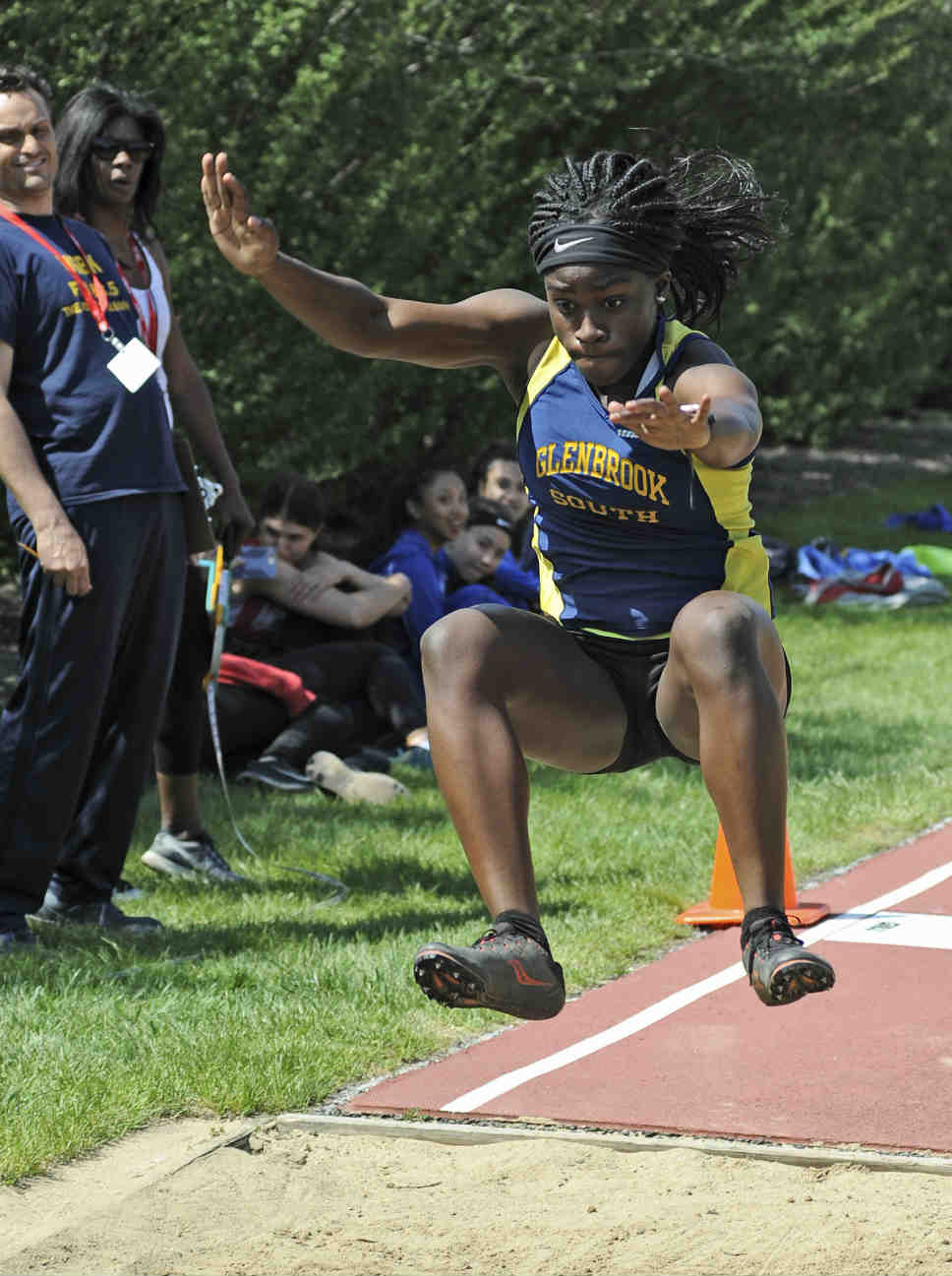 Glenbrook South’s Raelyn Roberson goes airborne in the long jump at the Niles West Sectional. She took first with a leap of 18-8. PHOTOGRAPHY BY GEORGE PFOERTNER

(Updated: Raelyn Roberson took runner-up honors in the long jump with a personal-best leap of 19-4 1/4 at the Class 3A State Meet in Charleston on May 18-19.)

“For a coach, getting someone like Raelyn on your team is like catching lightning in a bottle,” says Dan Zapler, jumps coach for the Glenbrook South girls track and field team.

Roberson’s takeoff in the long jump is double-take worthy.

Her ceiling? It’s anyone guess.

Roberson put her explosiveness and extravagant talent on display at the Class 3A Niles West Sectional on May 10. She popped an 18-8 to take first place by nearly 10 inches.

“The good news with her is that 18 feet is now her floor,” says Zapler, who also watched his star pupil leap 18-8 to win the long jump title at the CSL South Meet at Maine South on May 3.

The sophomore has become a happening at track and field meets.

And it’s not by happenstance.

In order to jump off the charts, Roberson has not only refined her technique — but she also has melded her God-given talent with hard work.

“It’s her dedication,” says Zapler. “She worked all year long to get better. As far as strength and conditioning goes, she showed up Day 1 in midseason form.

“Being trained by TCBoost [Sports Performance] helped a lot,” the GBN assistant adds. “Speed and power translates into longer distance. And she still can get faster and stronger.”

“I’d like to make the finals and possibly break out a 19-footer,” Roberson says. “Being positive is the only way to be.”

Part of her newfound confidence is getting her form down pat.

“I’m been trying to fix everything that I’ve doing wrong,” says Roberson. “I just keep trying to perfect my technique.”

Being a freshman last spring, Roberson might’ve been a little overwhelmed by the competitive environment of a state meet.

This year? Probably not.

“She’s got the potential to be right there with the best jumpers in the state,” notes New Trier jumps coach Jamie Klotz. “She’s become the standard around here — especially after going 18-6 at the CSL South Meet. To jump that far in that sand pit at Maine South is an amazing feat.

“I remember her coming onto the scene and how quickly that she started knocking on the door. She’s really made herself into an elite long jumper,” Klotz adds. “She’s improved her strength and explosiveness. And she’s a gamer. As a coach, you die for athletes like her.”

Her rise to prominence can be traced to last year’s sectional at Loyola Academy. She won the event with a breakout jump of 17-11 ¾.

To her credit, she’s thinking in the present — and in the future — and not in the past.

“Just taking it one foot at a time,” she says, with the slightest of smiles. 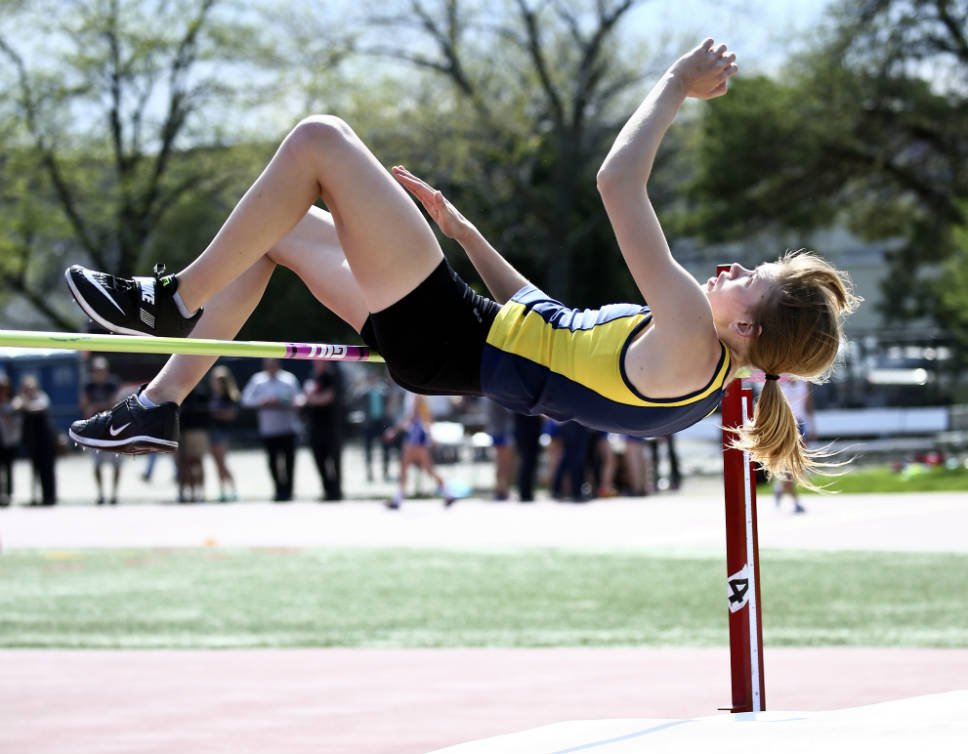 Taylor Ozimek of the Titans earns a state berth in the high jump. PHOTOGRAPHY BY GEORGE PFOERTNER 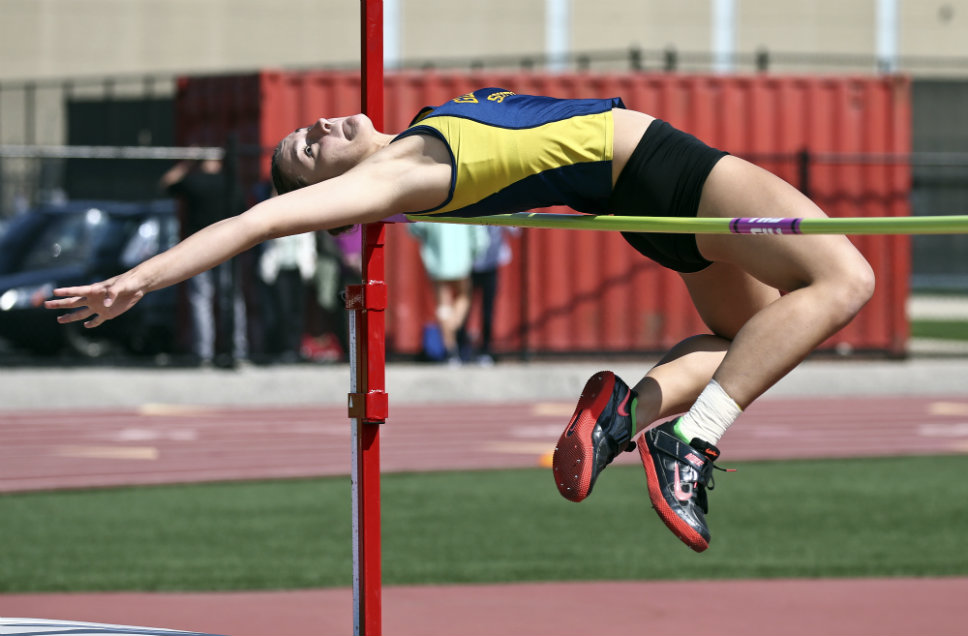 GBS’s Anne Streb qualifies to state with a 5-2 leap at sectional. PHOTOGRAPHY BY GEORGE PFOERTNER