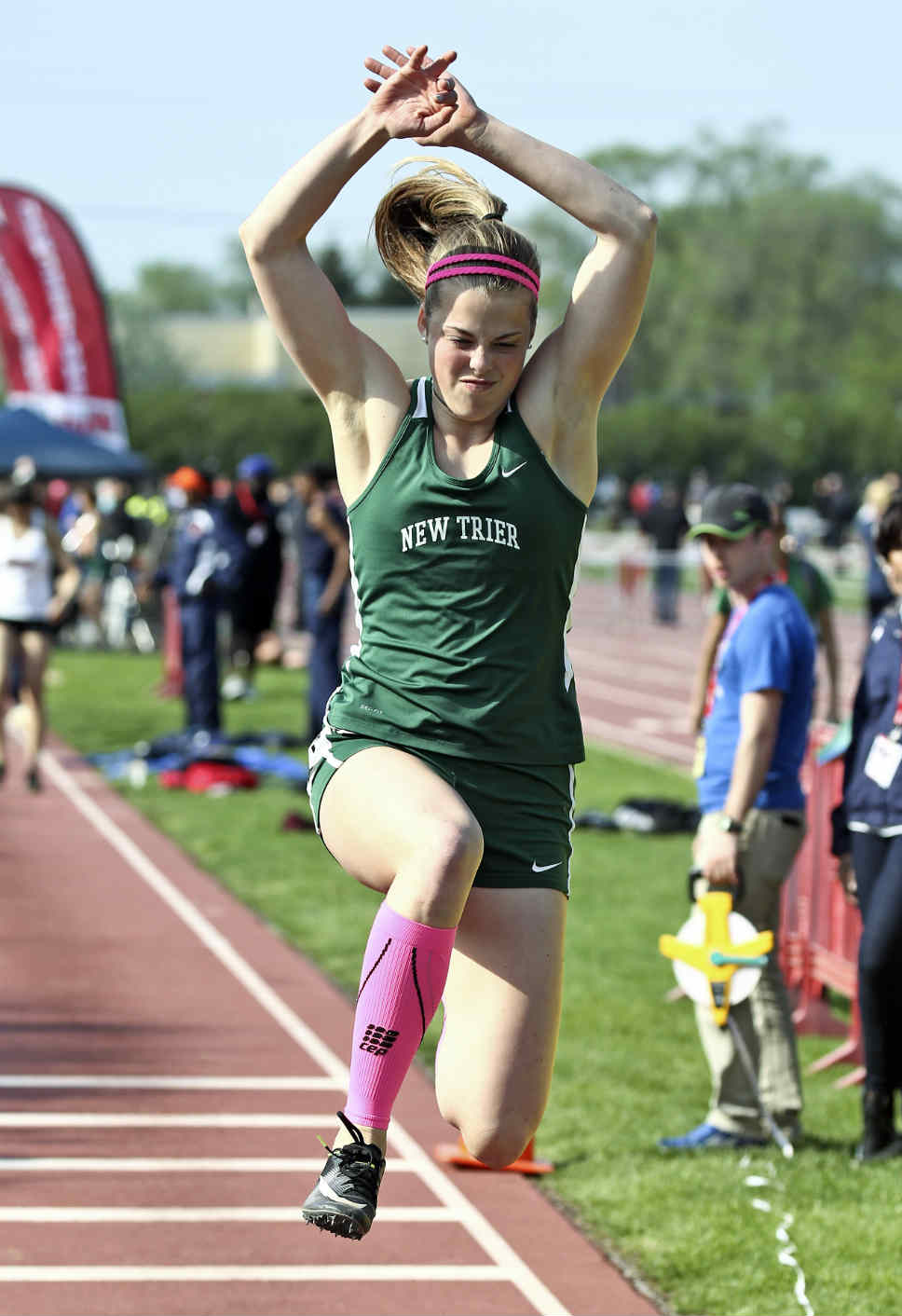 New Trier’s Sydney Kunkler competes in the triple jump at the Niles West Sectional. She took first place in the event. PHOTOGRAPHY BY GEORGE PFOERTNER

She’s not the bashful sort.

Kunkler doesn’t mind having her name in lights.

The effervescent Kunkler also is a rather unique athlete. The junior helped the New Trier girls track and field team to a first-place team finish at the Class 3A Niles West Sectional on May 10.

She remains one of New Trier’s star attractions.

“She’s been able to blend the arts with athletics,” said NT assistant coach Jamie Klotz. “It’s hard to balance all that. But she’s done it real well this spring.”

The stage definitely is a draw. But so is the euphoria of flying through space.

“She might be a happy-go-lucky kid,” Klotz said. “But she’s also very focused.

“She competes with a never-say-die attitude,” the coach added. “She’s got great speed down the runway, and she applies the fundamentals very well.”

To her credit, Kunkler has kept her competitive edge in both fields.

“Juggling theater and track, the practices and rehearsals, can be difficult,” admitted Kunkler.

But she’s figured it out.

Kunkler’s roles as an actress are adding up. She started performing in Children’s Theater several years ago. As an eighth-grader, she played the role of Jafar in the stage version of Aladdin. And earlier this spring, she was a cast member in New Trier’s Lagniappe-Potpourri variety show.

As a triple and long jumper, Kunkler just keeps getting better. A three-time sectional champ, she will be competing in her third straight state meet in Charleston this weekend.

“This year, she’s going to go down there as a seasoned jumper,” said New Trier head coach Robert Spagnoli. “And there’s no reason for her to be nervous. Just go down there and score.”

Her arrow is pointing up. Kunkler came up with personal bests in both the long and triple jumps at the sectional meet.

“By an inch and by an inch,” said Kunkler.

And, despite being seeded No. 1 in her specialty — the triple jump — Kunkler didn’t dare go into the sectional overconfident.

“Nothing is assured,” she said. “I’m pretty motivated not to take anything for granted.”

There’s a good reason for that — especially after the CSL South Meet on May 3 at Maine South. It was not Kunkler’s finest hour. She finished behind a freshman, Glenbrook South’s Sydney Willits (35-3 ¼), by nearly three inches.

“Triple jump is my thing,” said Kunkler. “After losing to a freshman last week, I knew that I had to step it up today.

“You have to pay attention to the new ones [like Willits] coming into the competition,” she added. “I still remember coming in as a freshman. I was oblivious to everything.”

And now … Kunkler has her sights set on breaking the school record at New Trier, which Madga Wicker currently holds (37-1).

“Hopefully, I can break it at state,” said Kunkler.

She will need a breakout performance to put her in medal-winning territory. This year’s state competition is loaded with freakish talent, including Neuqua Valley freshman Riley Ammenhauser (40-6).

No doubt, Kunkler will be decked out in pink at the showcase meet in Charleston.

“When I first started wearing the pink ones [compression socks], I thought maybe they were too obnoxious,” said Kunkler. “But I ended up liking them. I think they add some flair.

“Marne [Sullivan] also wears them, as well as others on our team,” she added. “We’re making it a tradition.”

Who knows? Kunkler might even take that tradition to her new jumping destination.

“Track has open up a lot of doors for me,” she said.

Having good grades and test scores also is making her attractive to track coaches at high-level schools such as Wake Forest, Georgetown, Villanova and Princeton.

“I’ve gotten the dialogue started with some schools,” said Kunkler. “It’s pretty exciting. College will be a new chapter in my life.” 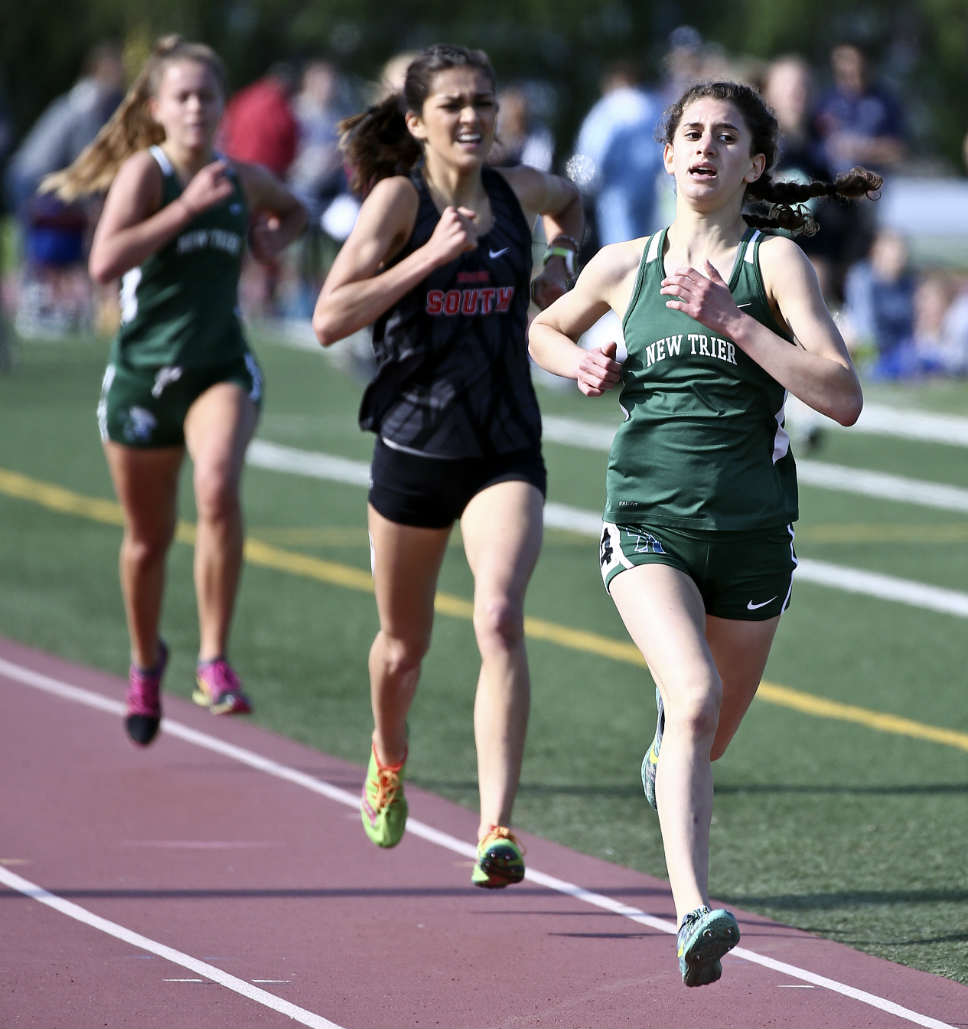 NT’s Leah Ulrich drives to a first-place finish in the 3200 meters. PHOTOGRAPHY BY GEORGE PFOERTNER 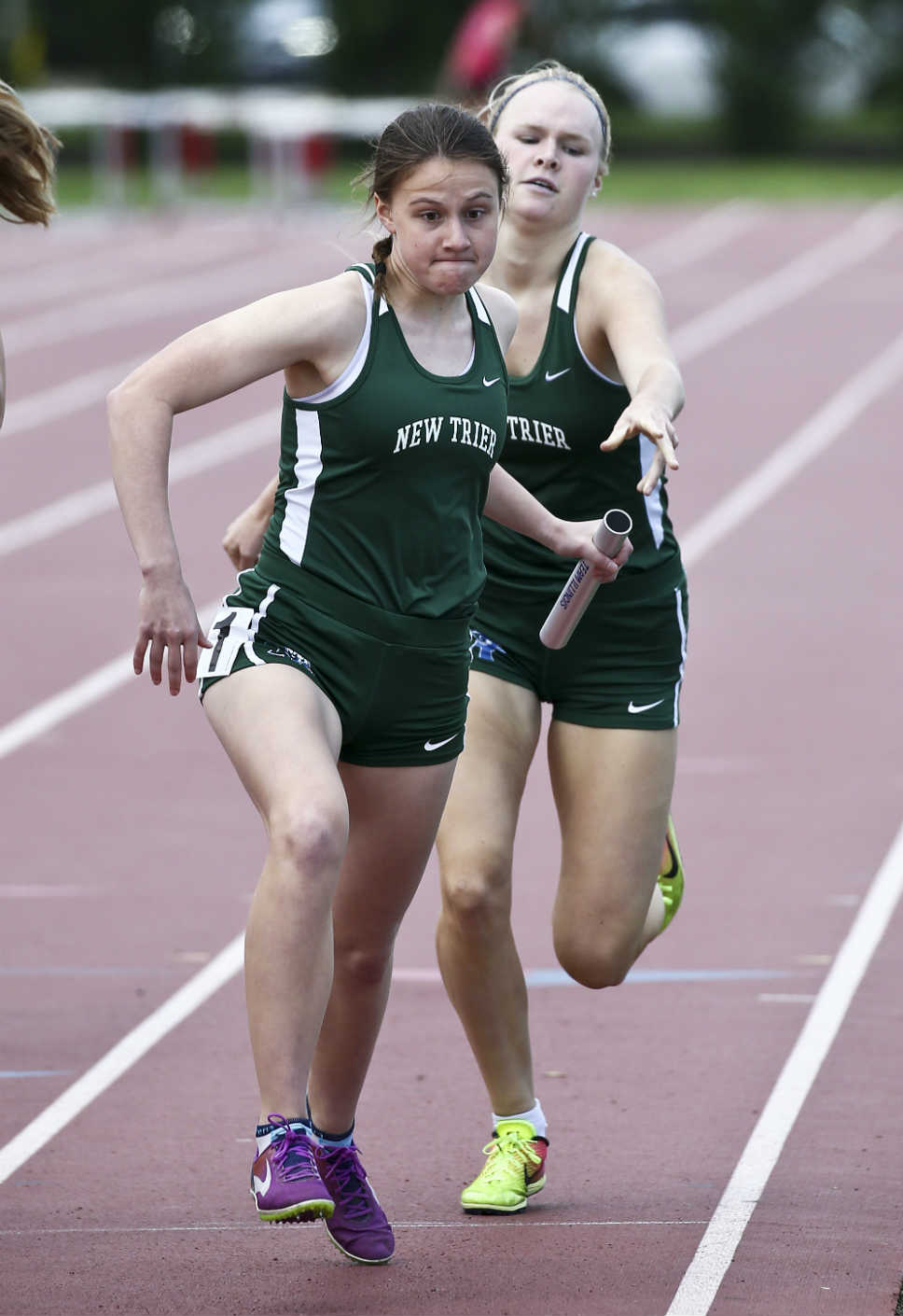 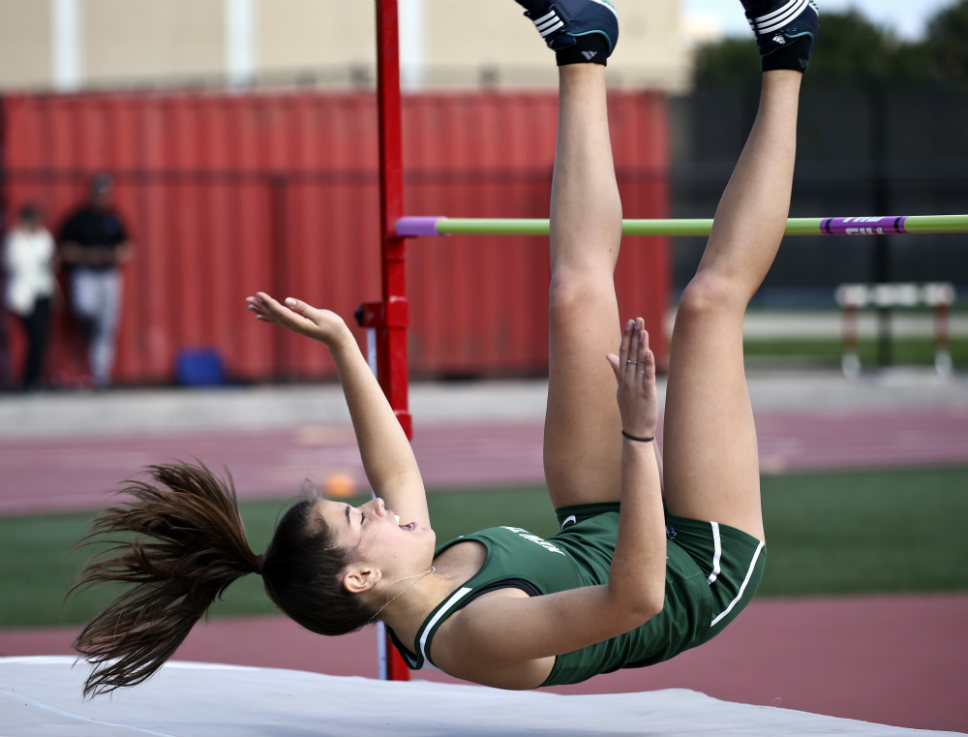 Natalie Karabas reacts as she clears state-qualifying height in the high jump. PHOTOGRAPHY BY GEORGE PFOERTNER 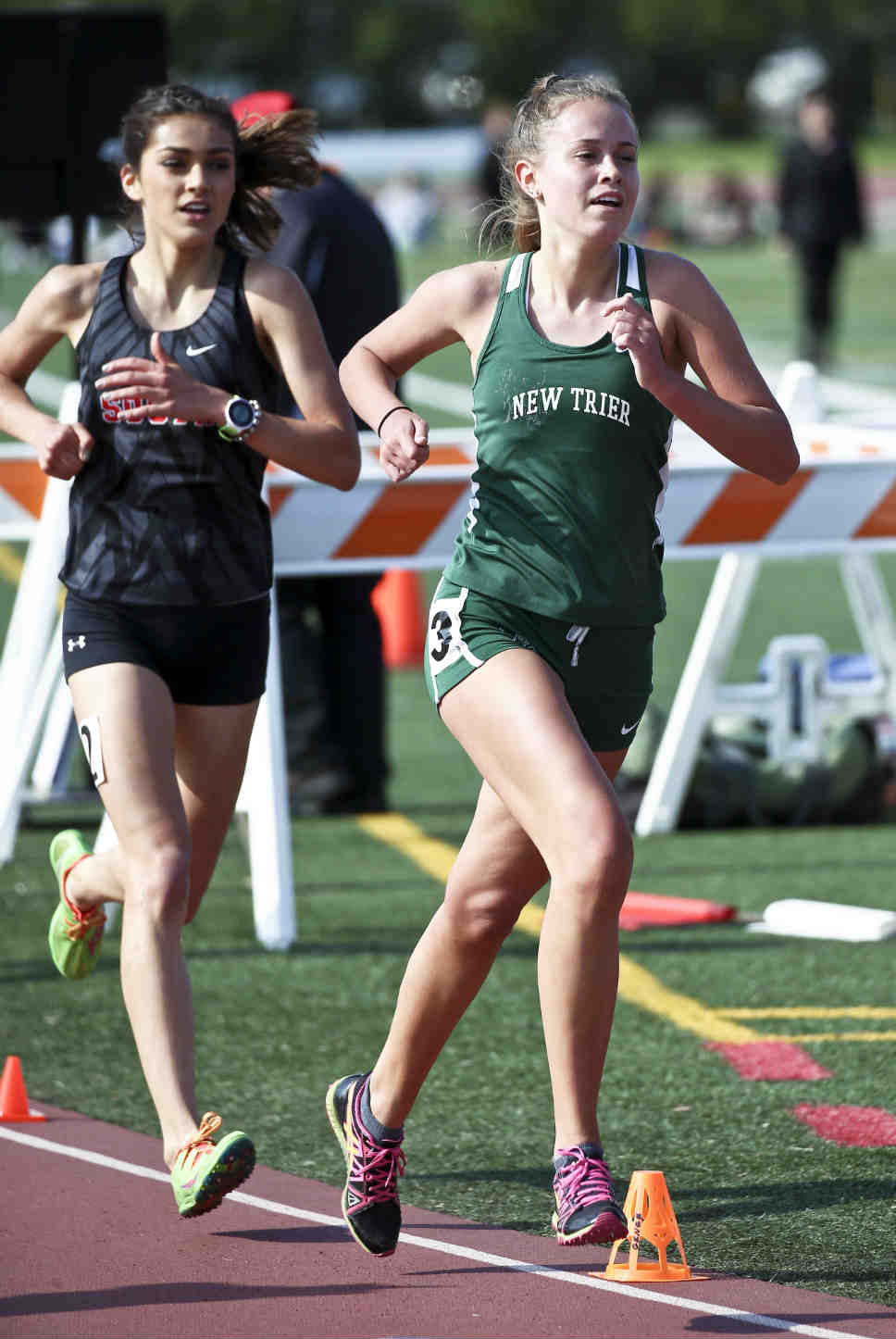 Ellie Finnigan of the Trevians (right) races to a state berth in the 3200 meters. PHOTOGRAPHY BY GEORGE PFOERTNER