Tucked inside a converted warehouse on an industrial cul-de-sac off Old Willow Road near Target lies the Village Treasure House, a 5,000-square-foot showroom of upscale, consigned furniture, rugs, lighting, artwork and home décor.

With no visible storefront or passing foot traffic, Northbrook’s Paddock Drive is an unlikely location for a thriving retail store. Nonetheless, the Village Treasure House enjoys a steady stream of customers, including dealers, collectors and designers, seven hours a day, five days a week.

So much so, that when volunteers at the Village Treasure House open their doors on Tuesday mornings at 10 a.m., they’re often greeted by a long line of customers- sometimes 15 deep – eager to browse the week’s new crop of inventory.

“Mondays are crazy here,” said Northfield resident Deedee Brannigan, one of 100 local volunteers who staff the non-profit Village Treasure House. “We spend all day moving new pieces to be priced, tagged and merchandised. By the time Tuesday rolls around, it looks like a completely different store.”

But the Village Treasure House is more than just a second-hand furniture store; the resale consignment shop is also a lifeline for thousands of local families and women in need. Over the course of its 20-year history, the store has distributed nearly $2.5 million in profits to 16 local agencies, including Shelter, Inc., an Arlington Heights- based shelter providing community-based emergency and long-term shelter for abused and neglected children and adolescents.

“All the agencies we support have seen their other sources of funding cut in recent years,” said Village Treasure House volunteer Kathryn Hall. “Many of these agencies previously relied on funding from the state, which now has no money.”

Regular funding from the Village Treasure House, said Hall, helps agencies like the Hunger Resource Network – which distributes thousands of pounds of chicken and produce each year to underserved families in Chicago and the North Shore – continue to operate.

And while many of the Village Treasure House’s regular customers feel good knowing all the store’s profits are donated to 16 local charities, it’s the great bargains and quirky, unexpected discoveries that keep them coming back. But it’s first come, first served.

“One week we had a bright purple fainting couch on the showroom floor,” said Brannigan. “It sold fairly quickly, as I recall.”

It all started in 1998, when Leslie Decker, Village Treasure House founder and retiring head manager, visited The Courtyard, a well-known non-profit consignment store in Hinsdale. Impressed by The Courtyard’s mission and operation, Decker decided to start something similar on the North Shore.

“She went back to her car and quickly wrote down everything she learned,” said Brannigan. 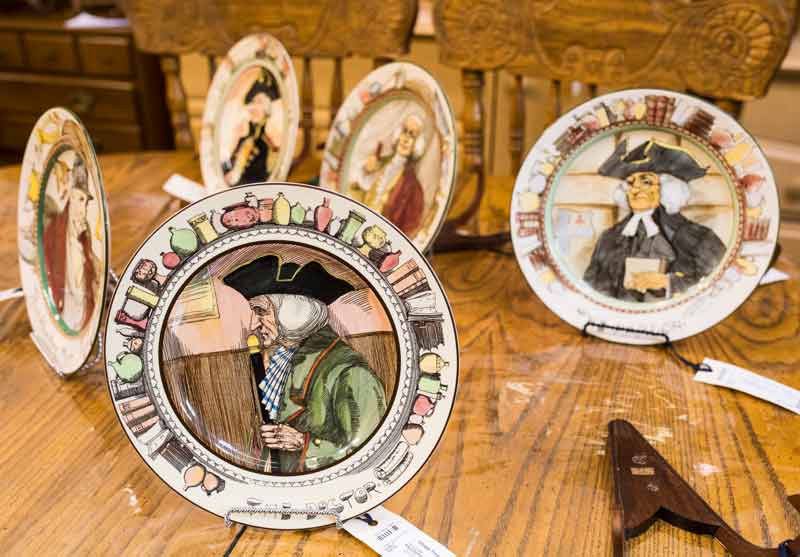 A few of the treasures at The Treasure House in Northbrook. PHOTOGRAPHY BY JOEL LERNER 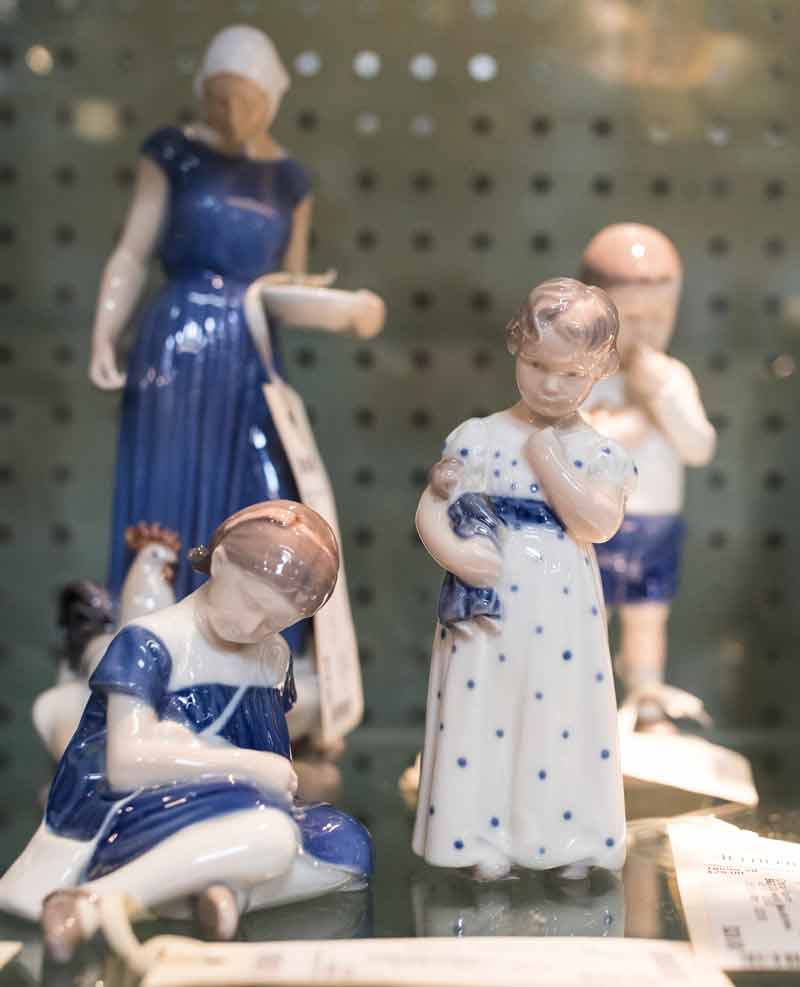 A $5,000 grant from the Glenview Community Church helped the Village Treasure House open its first location in a small, rent-free bungalow on Waukegan Road in Glenview. As business picked up, the shop expanded into bigger digs in the former State Bank building on Glenview Road. In 2009, it moved into the warehouse on Paddock Drive.

While roughly 80% of Village Treasure House inventory is consigned, 20% is simply donated. Consigners agree to a 50/50 split with the organization. New products are given an original price that drops by 15% every 30 days the item remains unsold. Goods unsold after 90 days are either returned to the customer or reclassified as a donation.

“About 40% of our inventory sells within the first 30 days,” said volunteer Sandy Van Epps, who lives in Northfield.

Small tabletop items are delivered directly to the store, but the Village Treasure House’s team of professional movers picks up larger pieces directly from homes.

A typical Village Treasure House consigner is often a baby boomer, downsizing from house to apartment.

“When The Vi assisted living facility opened a few years ago in The Glen, we received a steady flow of dining room sets,” said Brannigan.

The average customer, said Brannigan, might be young millennials setting up their first house or apartment on a budget. Shopping for used, upscale furniture offers better value than buying new pieces at popular retailers such as West Elm, CB2 or Pottery Barn.

“When you shop consignment you pay less but get better quality furniture that lasts longer,” said Van Epps. “Many of our young customers will breath new life into a old piece by painting it gray or white and adding new hardware.”

“She got it for 20% of its original cost,” said Van Epps. “And by the way, they still sell that exact same dining room set at Thomasville.” 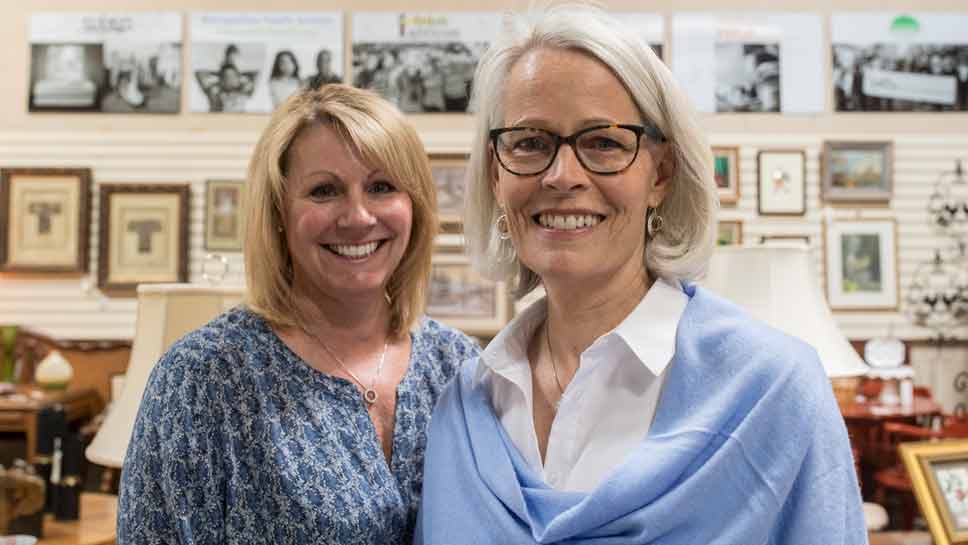 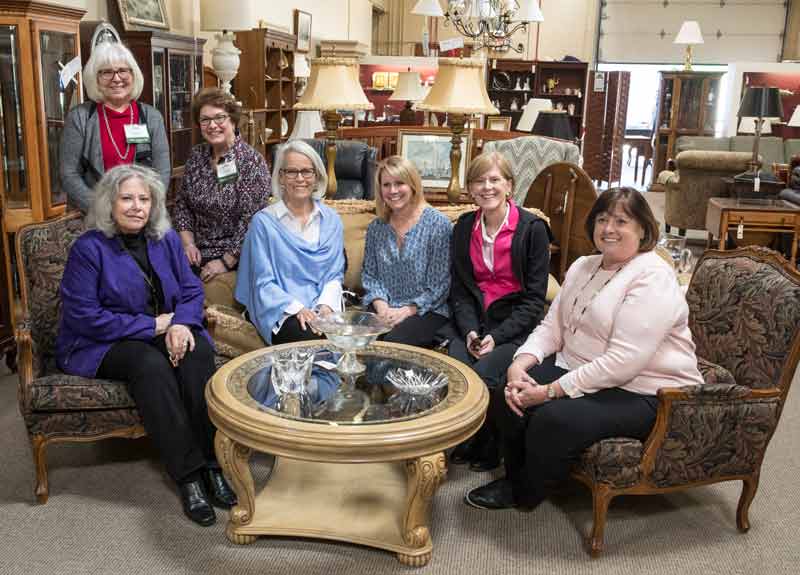