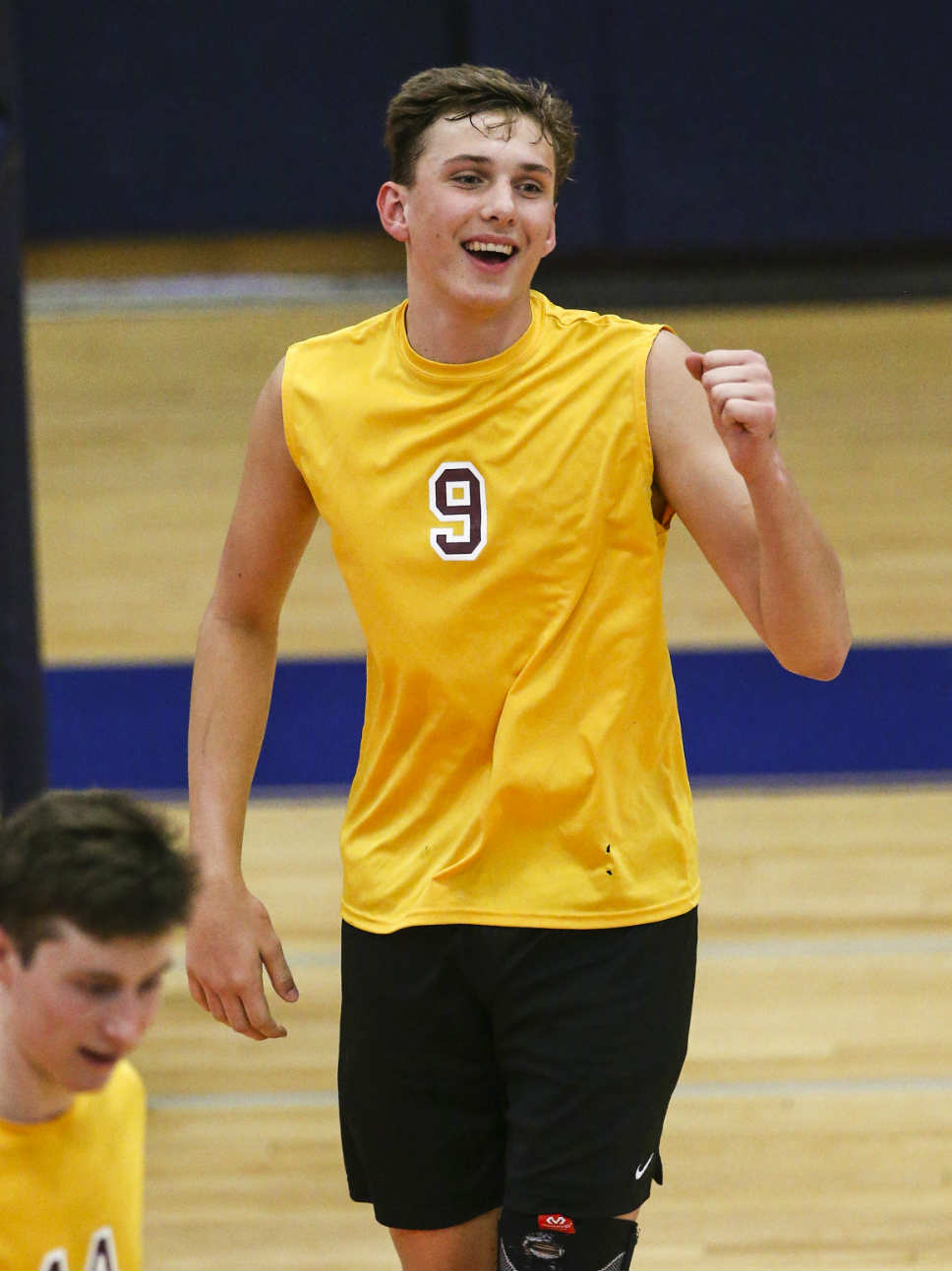 Drake Johnson of the Ramblers celebrates a point. PHOTOGRAPHY BY JOEL LERNER

Drake Johnson was told he screamed in agony after attempting to block a punt in a season-opening freshman football game more than three years ago.

The Loyola Academy senior — now an ex-outside linebacker/tight end and a current right-side hitter for the varsity volleyball team — has an airtight excuse for not being able to remember his immediate reaction to fracturing a tibia and smashing a growth plate around a knee at Marquette High School in Wisconsin.

“I blacked out,” says the 6-foot-7, 210-pound Johnson, sitting in a chair on the balcony above the Ramblers’ main gym floor before a recent evening practice.

Johnson, a resident of the Old Irving neighborhood in Chicago, underwent three surgeries after an ambulance transported him off the gridiron on that late-August day: one before his freshman volleyball season, one during it and one in the fall of his sophomore year.

“I remember seeing him get around in a wheelchair at school,” Ramblers senior middle Matt Wiertel says.

The hard-hitting, left-handed Johnson has been upright and on a roll this spring, having been named to the all-tournament team at each of the Vernon Hills, Wheaton Warrenville South and Downers Grove South invites. Loyola Academy boys volleyball coach Lionel Ebeling needed a steady, powerful front-row player to emerge after 6-5 junior outside hitter Jack Howard — LA’s kills leader last spring — suffered a serious ankle injury in this spring’s first practice and had to miss significant playing time.

Johnson, a D1 Volleyball Club member and the current kills leader among Ramblers, did that.

In wins against Metea Valley, Prospect and St. Francis, Johnson finished with respective kill totals of 15, 13 and 12. His eight kills and two blocks helped LA defeat host Evanston 25-21, 25-23 on May 4, as the Ramblers improved their record to 16-10.

“Drake certainly has the right set of tools to play right side,” Ebeling says of the tri-captain (with Wiertel and senior middle Tom Declan). “He’s lefty. He’s tall. You have to love those traits, right? Drake makes high contact, finds open spaces with his ability to read blocks well. Gets high, hits hard — that’s what Drake does for us. With Jack Howard back, we have quite the dual threat.

“And Drake’s blocking,” the coach adds, “has improved a great deal since last season.”

Johnson’s interest in architecture shot up after his devastating leg injury in 2014. The young man suddenly had free time, plenty of it. Unable to commit to hours on volleyball courts, he joined Loyola Academy’s architecture club and caught the planning/designing/construction bug.

“I’d always liked building things, making little things here and there, before the start of my Loyola years,” Johnson says. “I was into LEGO, yes. I remember freshman year, in architecture club, thinking, ‘I really like this.’ I then looked up a lot of information about the field of architecture and became even more interested in it.”

Johnson became an officer — special events coordinator — of the architecture club and oversaw the remodeling of the school’s theology office. The project, which made the space more spacious, took a semester and a half to complete.

“Big project,” says Johnson, who intends to major in architecture and play club volleyball at the University of Kansas.

His eighth-grade volleyball team at Immaculate Conception-St. Joseph School in Chicago (Old Town) was a big deal. It went 11-0 in the regular season and reached the semifinal round of a city tournament for Catholic schools. None of the other sports teams at the school came close to matching the squad’s success in the 2013-14 academic year.

There’s a story behind Drake Waltom Johnson’s first name. Drake’s parents, Dave (a former hockey player at his alma mater, Glenbard East) and Crissy (a former standout prep basketball player in Iowa), had tutored and mentored Cabrini Green children, accompanying some of them to Cubs games and other field trips that had nothing to do with a baseball field. One of the couple’s youngsters, Anthony, went by “Drake”.

“No one can stop him,” Wiertel, a Mount Prospect resident, says. “He’s been our guy on offense, coming up with big kills, timely kills. He gets high up, way up there, and he’s more consistent at putting kills away this year than he was last year.

“We count on him to bring a lot of energy each time we compete.” 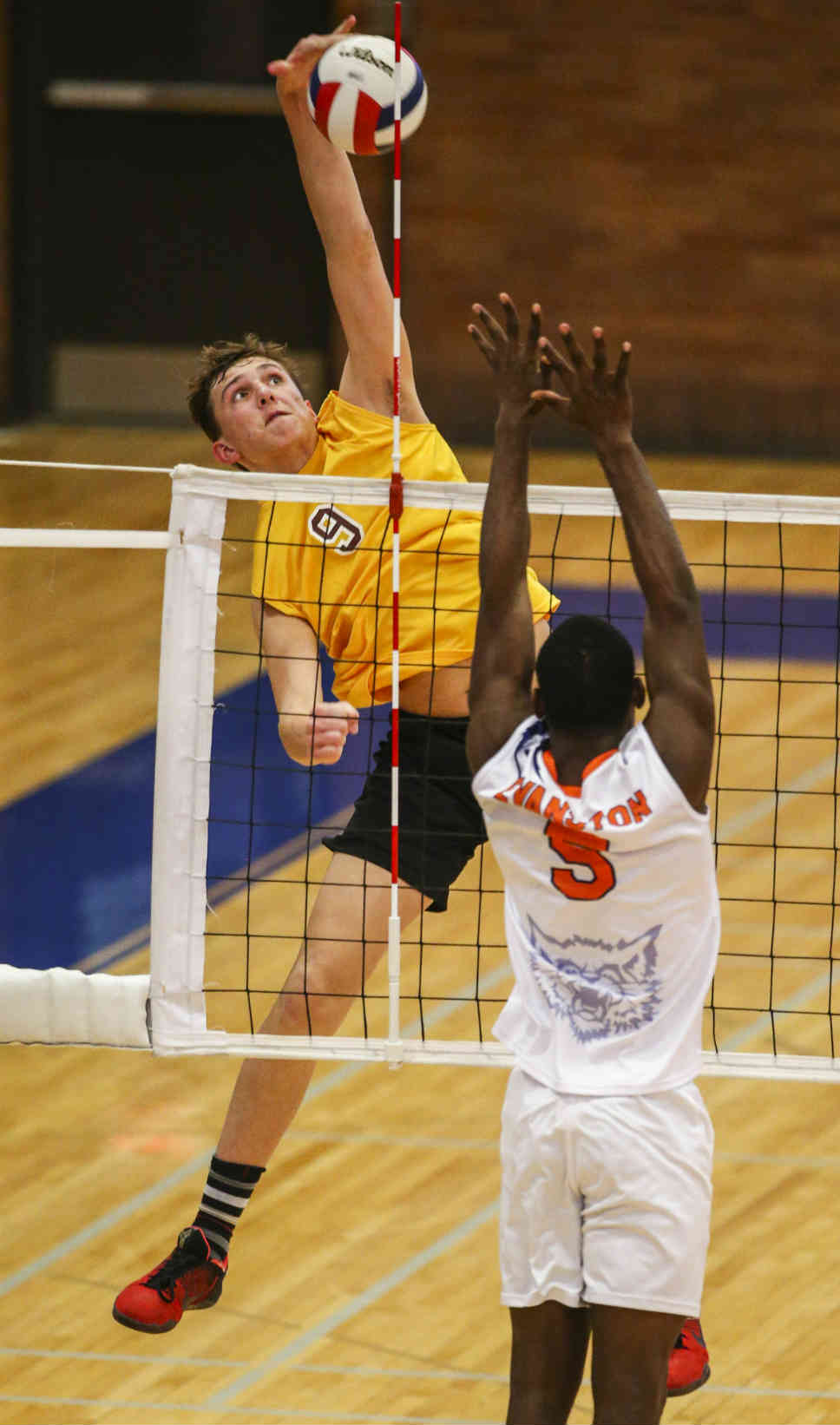 Loyola Academy’s Drake Johnson makes a play at the net during earlier action this spring. PHOTOGRAPHY BY JOEL LERNER 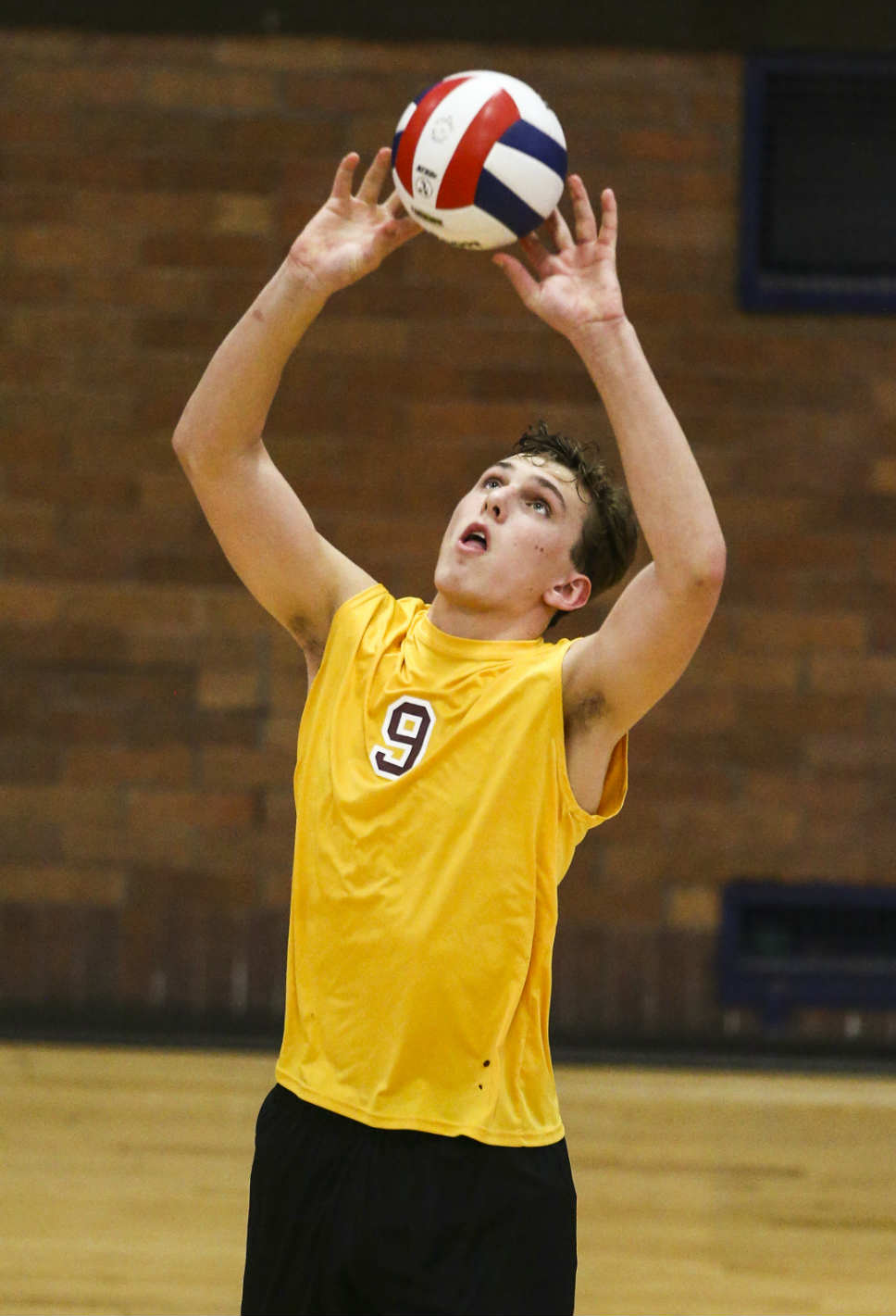