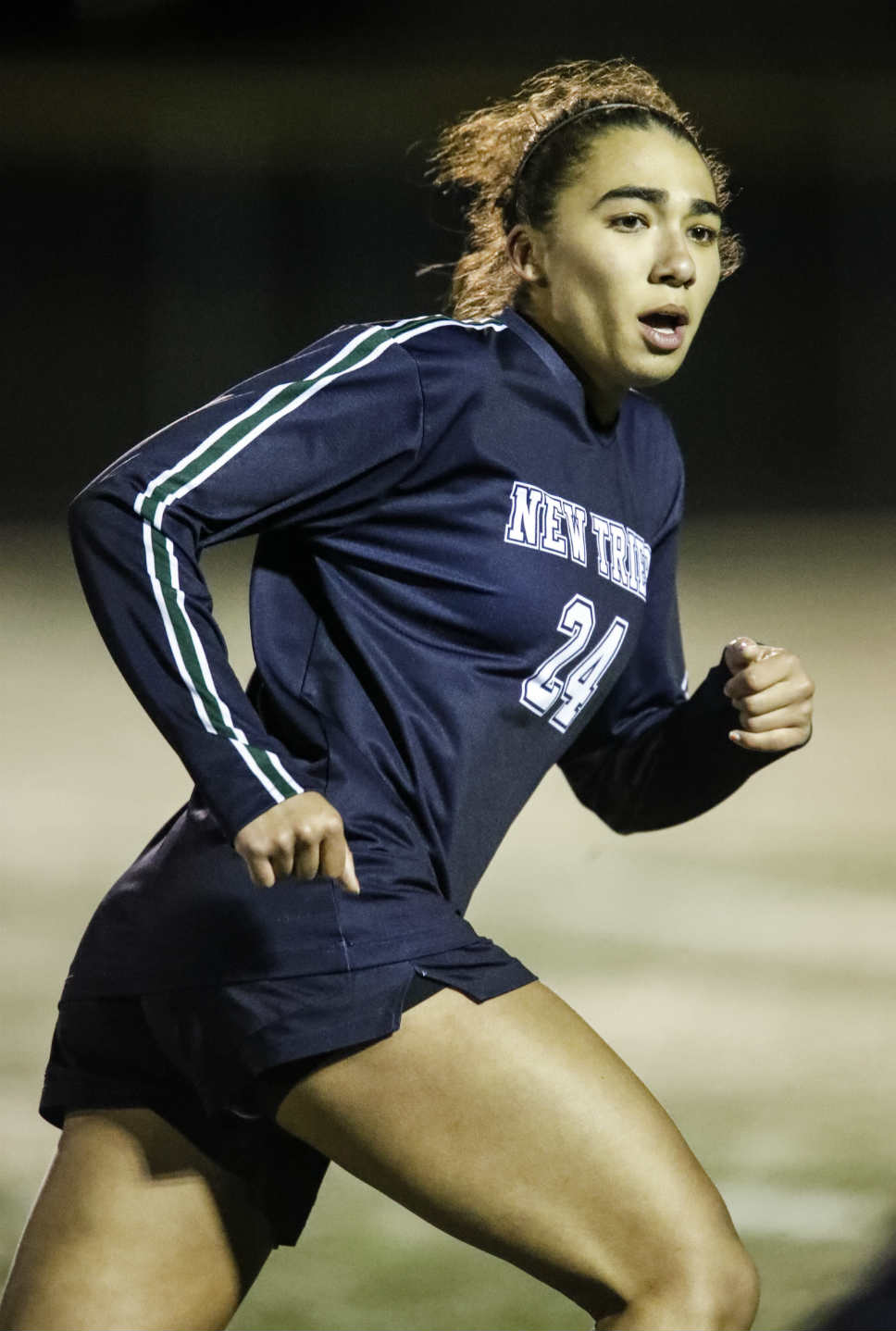 Her coach likens it to a war cry.

It could also be considered a primal scream’s first cousin.

Parker, a 5-foot-10 center back and a 2017 Illinois High School Soccer Coaches Association Class 3A all-stater, usually belts out the celebratory shout with a simultaneous, downward thrust of her arms.

“That’s pure joy, pure excitement,” New Trier soccer coach Jim Burnside says. “I love it. She screams like that for her teammates; it’s never about her.”

The DePaul University-bound Parker scored a goal against Evanston and struck for another against Lake Forest High School in a pair of home victories last weekend in Northfield. The 3-1 defeat of Evanston on May 4 and the 2-0 downing of LFHS on May 5 upped NT’s sparkling record to 16-0-2.

Parker paces the reigning Class 3A state runner-up with 12 goals — after leading a 24-3-1 squad with 19 (to go with 6 assists) and helping it notch 20 shutouts last spring. The talented, hardworking back also blasts free kicks and plays a vital role on Trevians corner kicks.

“She’s the heart of our team, filled with positive energy,” Iserloth says. “Such a tremendous presence … on and off the field. Sydney motivates me. I count on her; we all do. And she is a good person, a humble person.”

Parker was a very good soccer player when a left ACL tear marred her freshman season. The FC United club soccer veteran then made an impact all over pitches in 2016, as NT captured its third straight Class 3A state championship.

“Soccer is such a team sport, and that’s what I like about it more than anything else,” says Parker, who first played AYSO soccer at the age of 4 and honed her dribbling and shooting skills in backyard sessions with her father, Carl, a former defensive lineman at Eastern Illinois University and the brother of former Baltimore Colts defensive end Steve Parker.

“It’s also physical, very physical at times, and fun,” she adds. “But the team atmosphere — there’s nothing better than that in soccer.”

Not long after running a curl route out of a cluster of Trevians before a corner kick against Evanston last weekend, Parker — a member of the FC United U19 Developmental Academy club team — crushed a direct free kick from near midfield. The Wildkits’ goalkeeper had to make a high save to prevent the hosts from taking a 1-0 lead.

“Some of that leg power is natural,” Burnside, coach of the CSL South champions, says. “The rest of it you can attribute to hard work, to the time Sydney spends throwing weights around in the weight room. It’s pretty impressive, her game overall, her commitment to the game. She’s aggressive, tough, intelligent, driven, the whole package.

“You know what else she is?” the coach adds. “Kind and caring.”

“My parents (Carl and Karla, a former volleyball player) have been there for me throughout the years, with my mom offering her support in many ways and my dad pushing me and encouraging me to train,” says Parker, whose quality time with her father includes watching NFL games on TV.

Off the pitch, way, way away from the 50-50 soccer balls she’d likely win at an alarming rate in a match, Parker’s lighter side emerges. If her mood calls for her to dance near teammates or friends in a New Trier hallway, Parker has the moves to cut — no, shred — a rug.

“A great dancer,” Iserloth says of one of the best center backs in program history. “Sydney is the happiest person I know.”

Burnside, a soccer coach with more than 450 career victories at the prep level, ranks among the most passionate coaches in Illinois. Nothing pumps him up more than watching a well-executed corner kick result in a goal.

Or viewing a tenacious Trevians back thwart an opponent’s rush with a courageous tackle.

“Sydney,” Burnside says, “inspires me … inspires me to be a better me.”

Burnside says the laudatory words outdoors with his inside voice.

The echo of Parker’s post-goal war cry had finally faded.

Notable: New Trier sophomore forward-midfielder Emma Weaver scored two goals, including an unassisted tally, and assisted on senior back Sydney Parker’s goal in the Trevians’ 3-1 defeat of Evanston’s visiting Wildkits in a Central Suburban League South girls soccer match on May 4. Weaver then finished with an unassisted goal and an assist in NT’s defeat of visiting Lake Forest High School the following day. Freshman forward Mia Sedgwick delivered the assist on Weaver’s first goal in the contest with Evanston, and junior keeper Meghan Dwyer recorded the win in the CSL South finale for both schools. 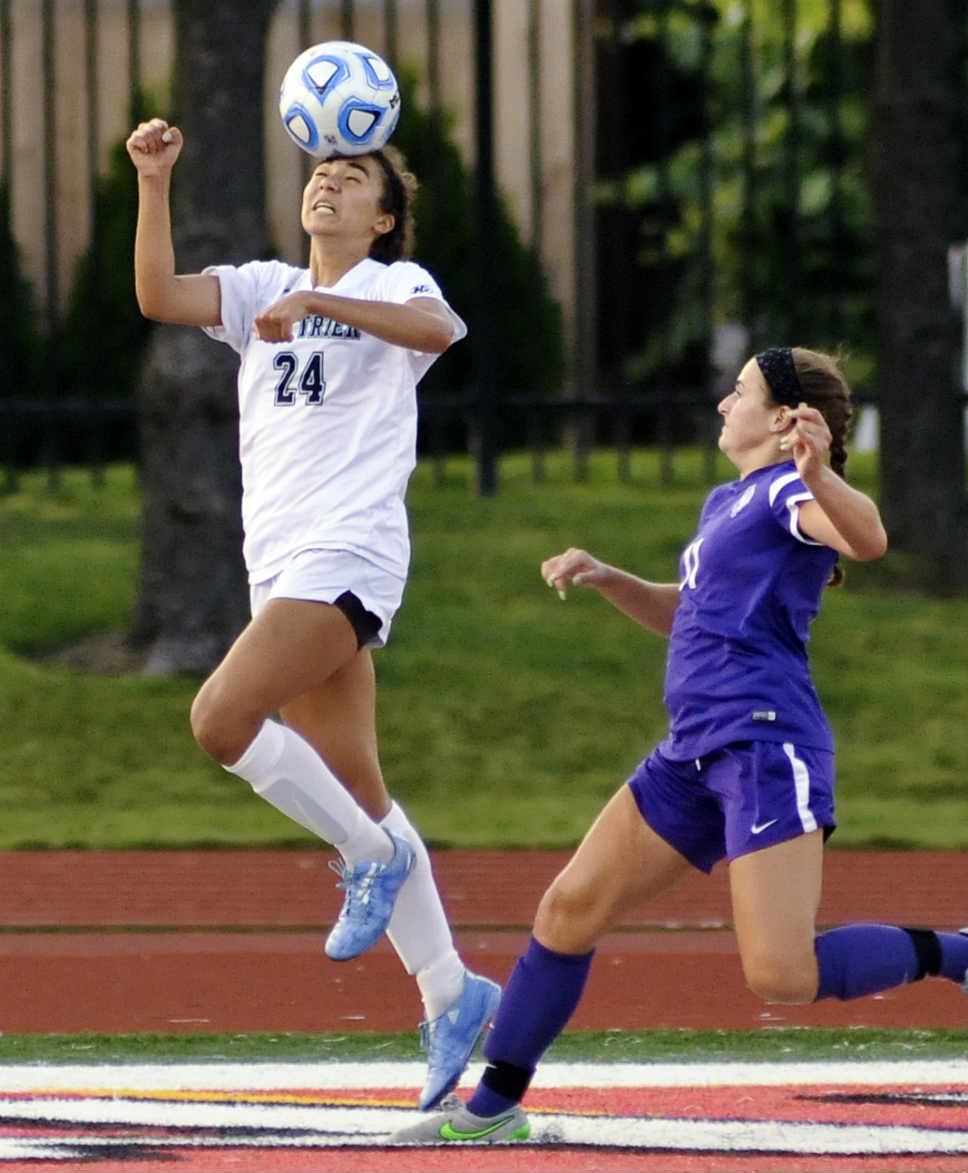