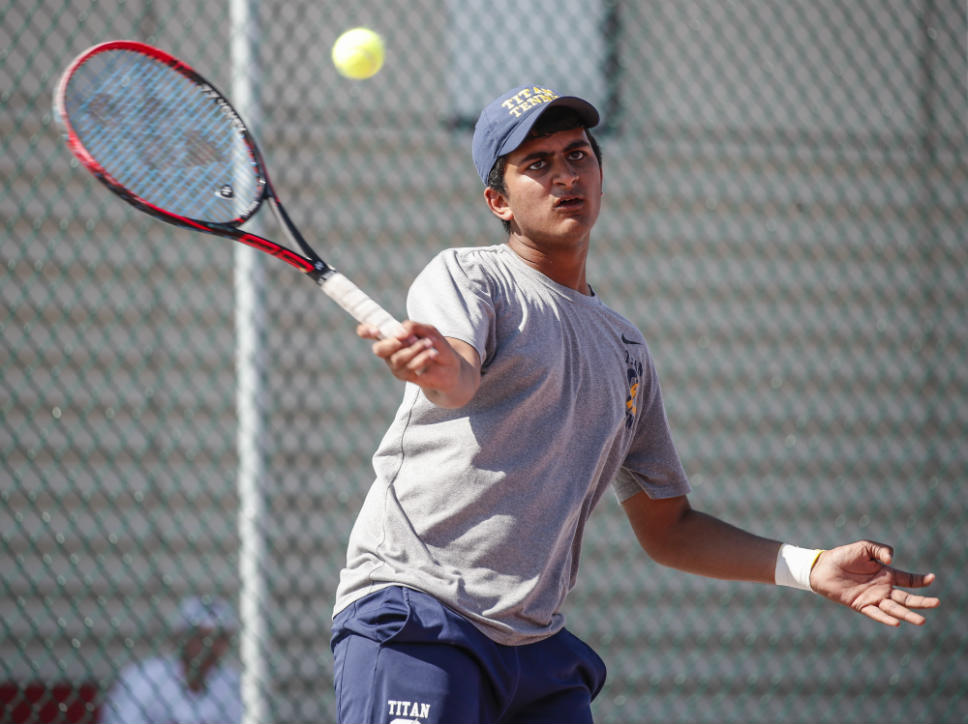 Glenbrook South’s Rohan Gupta competes in the Deerfield Invite. He took third in his bracket. PHOTOGRAPHY BY JOEL LERNER

At Deerfield, NT junior Brent Saltzman and freshman John Rogers topped the 3rd/4th doubles field without dropping a set, including the duo’s 6-3, 6-1 defeat of the top-seeded pair from Hinsdale Central in the flight’s final; NT juniors Charlie Raftery and Matt Lee placed third in the same flight.

Trevians freshman Aidan Moore tied for fifth in the 1st/2nd singles draw — as an unseeded entrant. The left-handed Moore won three consecutive matches after a first-round loss, capping the run with a 6-2, 6-7 (5), 12-10 (super tie-breaker) defeat of eighth-seeded Rayan Nehme of HC.

“I wasn’t expecting to win because of his good reputation,” said Moore, who aced Nehme with a hard slice on match point after reaching the final point by winning a lengthy rally on the 21st point of the super breaker.

“But I played with a positive mindset.”

Colin Fox, another NT freshman, made it to the semifinals of the consolation bracket after falling in a quarterfinal.

“We’re young and deep,” Trevians assistant coach Kevin Andersen said, alluding to the varsity’s contingent of seven freshmen. “The weekend was good for our program; we were able to showcase our lineups at two invites, and it gave our young ones chances to play against high-level competition.”

Glenbrook South: Titans teammates Michael Bukhalo and Rohan Gupta fell one set shy of facing each other for the 1st/2nd singles championship. Gupta, seeded third, lost 4-6, 6-2, 6-2 to top-seeded Danny Schmelka of Hinsdale Central in a semifinal.

Bukhalo, seeded second, then topped Schmelka 6-2, 4-2 (default) in the final.

Lake Forest High School: Scouts senior doubles veteran Yusef Alsikafi was skeptical at first about the midseason decision to pair him with junior singles player Oleksyi Vyshyvanyuk at No. 1 doubles.

Singles and doubles are entirely different animals in the tennis kingdom.

“Oleksyi is a very good singles player, such a singles guy,” said Alsikafi, a regular on doubles courts since his freshman year and senior Sam Warren’s doubles partner at the start of this spring. “But he was accepting of the lineup change, and now we’re looking forward to seeing how far we can go [in the state series, beginning with sectional action later this month].”

Sixth-seeded Alsikafi/Vyshyvanyuk lost a 1st/2nd doubles quarterfinal match to a strong Hinsdale Central team at the Deerfield Invitational last weekend, beat a pair of Glenbrook South Titans in a back-draw match and then fell 6-3, 7-6 (5) to a Stevenson duo. A win against the Patriots’ entrant in the bracket would have resulted in a fifth-place tie for Alsikafi/Vyshyvanyuk.

“We learned the most in that last match,” said Alsikafi, who battled with a sore right [his dominant] shoulder throughout the two-day event. “That doubles team from Stevenson … our doubles game needs to be where their doubles game is.”

The pairs might clash again at the Stevenson Sectional in a couple of weeks. Scouts varsity assistant coach Scott Gilbert, for one, would welcome a second encounter.

“Our guys complement each other well; Oleksyi has a solid backhand return, and Yusef is a solid net player,” Gilbert said. “Oleksyi’s [offseason] tournament experience in singles has made him a precise player. Both are really good competitors, and both are really, really coachable.”

Both train at The Racquet Club of Lake Bluff. So do Warren and Daniel McEvoy — Lake Forest’s other entrant at 1st/2nd doubles last weekend. The unseeded duo edged the bracket’s No. 8 seed in a first-round match and later dismissed Libertyville’s No. 1 doubles team 6-2, 6-3 in a consolation round.

“Good weekend for those two — the best part of the weekend for us,” Gilbert said. “They did well, came up big.”

Giants coach Steve Rudman liked what he saw from Max Baum, who teamed with Matt Jarvis for the first time this spring and beat Deerfield’s top pair in a consolation round at 1st/2nd doubles.

“Good hands, with good instincts,” Rudman said. “Max has done a good job stepping up. He established himself this weekend. He can play at this level, play well at this level, and the things he did on the court clearly showed that.” 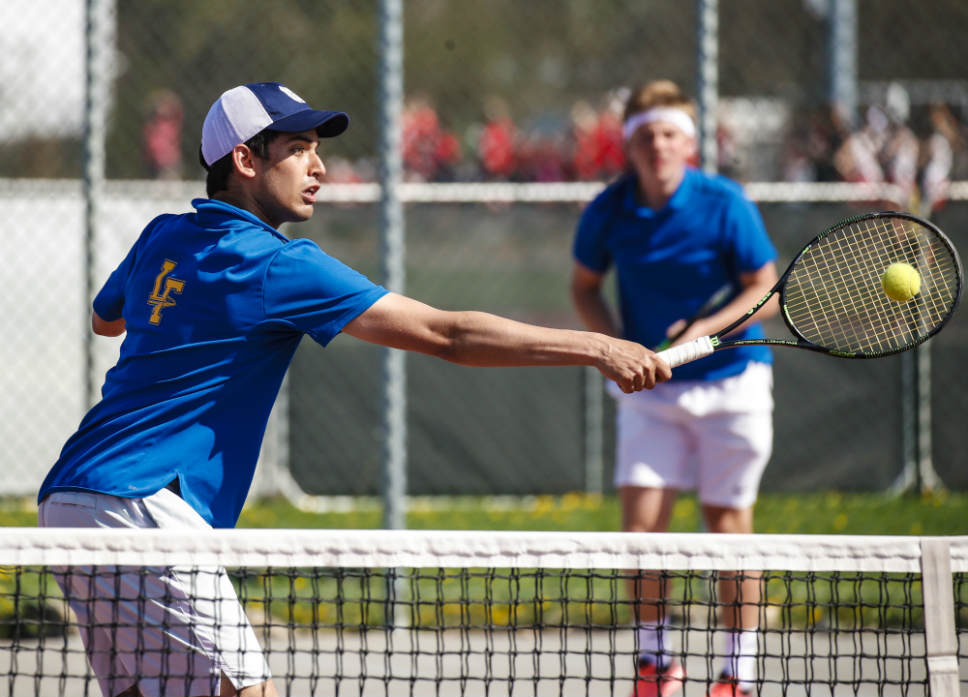 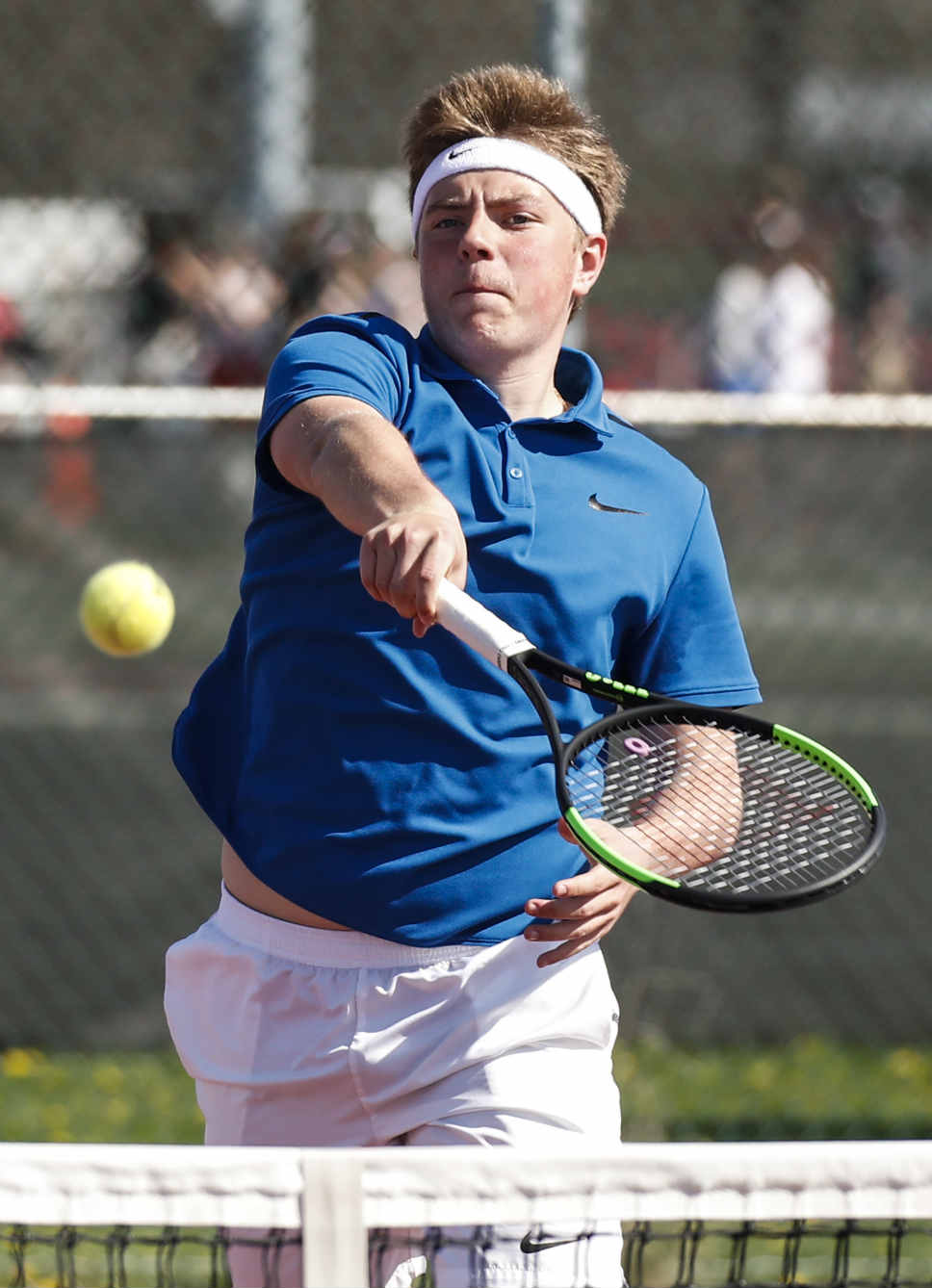 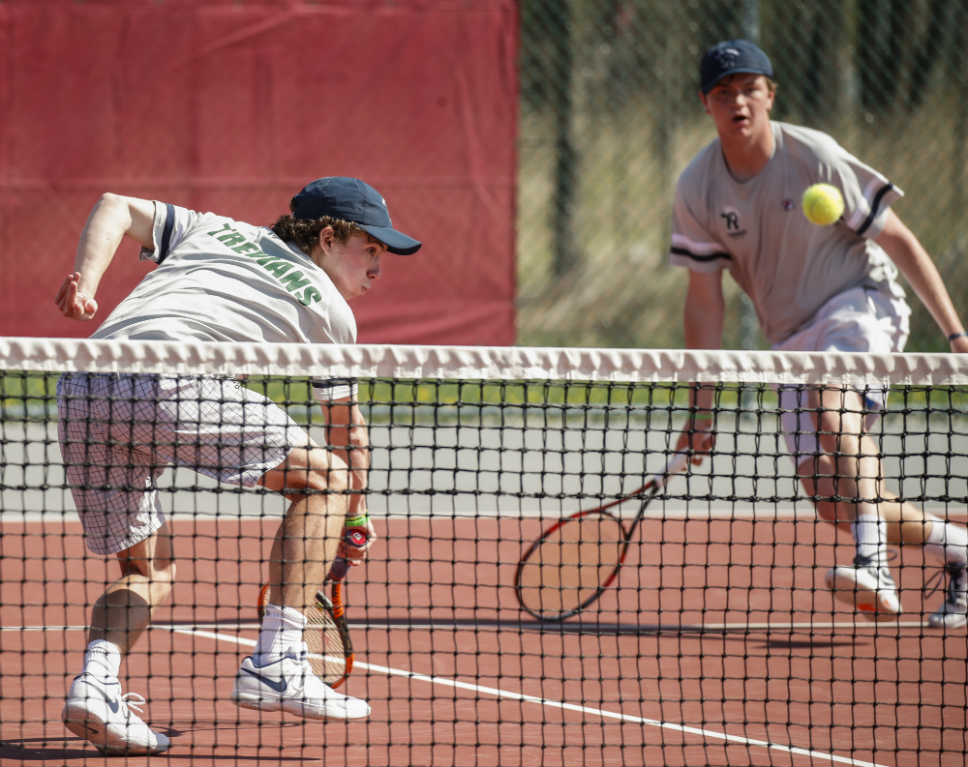 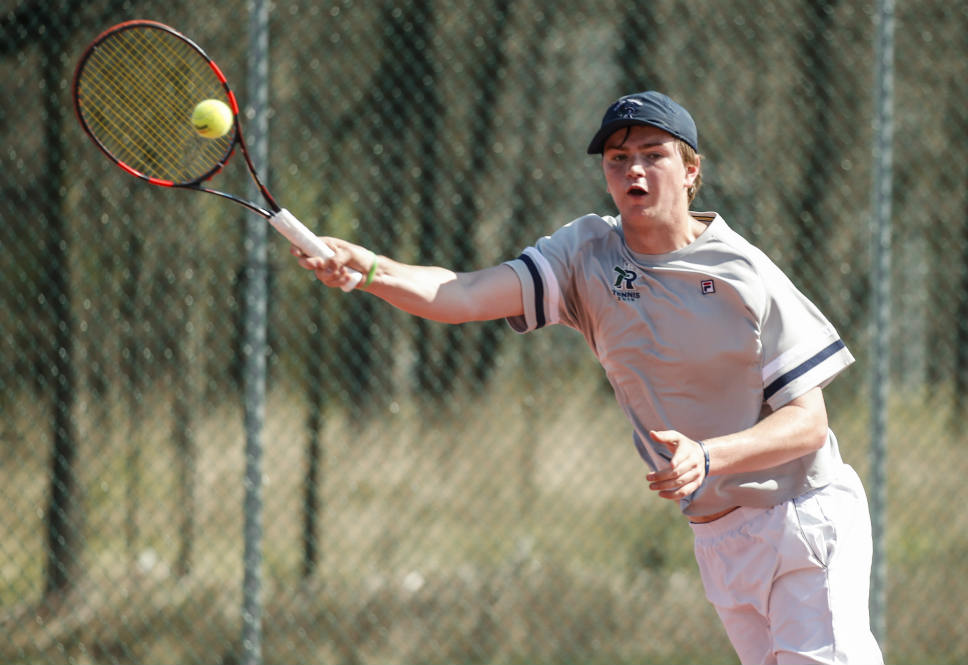