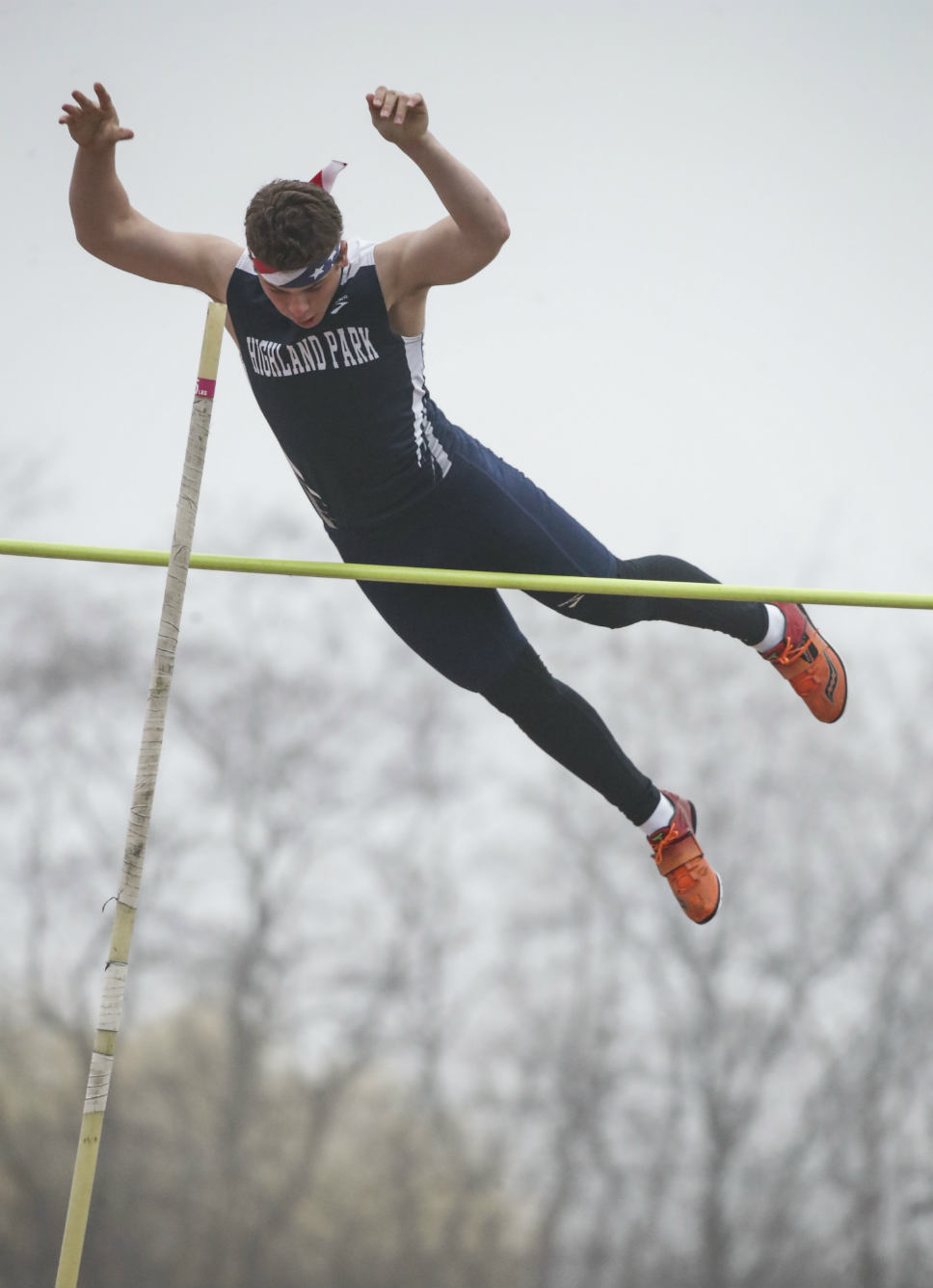 He’s hard to miss with that patriotic red, white and blue bandanna.

The same goes for those bright, neon-orange spikes.

Say hello to a different kind of athlete: the pole vaulter.

Fun for him is doing something different than more than 99.9 — or some number like that — percent of the population.

Fear? It never crosses his mind.

Kirsch leaves that to his mother, Jamie.

Talk about love for a son.

Now she, according to him, “is scared of heights.”

And yet, Jamie Kirsch, mother of four athletic boys, can’t bear not to watch her son take flight and hurl into space.

“She comes to every single meet,” says the vaulter. “She’s my biggest fan.”

In fact, Jamie was there — in the pole vault area — when the Giants competed in the Lake County Invitational on May 3 at Deerfield High School.

Kirsch didn’t have a breakout performance that day. Just a consistent one. He cleared 12-6 — which remains his personal best — to share fourth place with Libertyville senior Colin Beattie.

He used that meet to unleash his speed, his strength and his dare-devil mentality.

The technique? That part is still a work in progress for the dedicated, hard-working Kirsch.

Daniel believes that he’s got a pretty special pupil in Kirsch.

“Anything can happen on any given day,” Daniel says. “You just need that moment, when it all clicks.

“And that could happen for Ben,” the coach adds.

Kirsch’s competitiveness has a way of seeping out, when he’s on a pole-vault runway.

There’s a reason for that.

You should see him compete against his brothers — and cousins — at family gatherings. Board games like Monopoly and Settlers of Catan especially pique his interest.

“When the family is all together, there’s never a dull moment,” says Kirsch. “Whatever we do, it’s pretty competitive.

His older brothers — ex-HP discus and shot put thrower Doug, who is attending Illinois State University, and ex-HP long and triple jumper Nick, who is attending Carthage College — have always brought the best out of sibling No. 3.

“They’ve always pushed me,” says Kirsch, who also has a younger sibling, Gabe, who is a freshman hurdler and leaper for the Giants. “We’re always trying to prove who is the most athletic person in the family.”

He definitely owes a debt of gratitude to brother Nick.

“He’s the one who told me to try pole vaulting,” says Kirsch. “And once I tried it, I fell in love with it. Instantly.”

Teaming up with senior pole vaulter Ben Zavell also has been a benefit for Kirsch.

“They do a good job of keeping each other motivated,” says Daniel. “They push one other.”

Zavell matched his personal best of 12-0 to finish tied for ninth in the highly competitive Lake County Invite.

The communication between the two vaulters is vital — and continuous.

“If it weren’t for Ben, I don’t think that I’d be where I’m at as a vaulter,” Zavell says. “We’ve progressed together.

“He’s just very athletic,” he adds. “I am strong. But Ben is extremely strong. And he’s got that whole aura thing going, too.”

Kirsch, who used to play golf at the school, decided to “go all in” with pole vault, when he went up and over at the CSL North freshman meet two seasons ago.

The adrenaline hit him that day. After making 8-6 at his very first meet of the season, Kirsch made a significant jump by clearing 10-0 and winning the league title.

Now, he’d like to be mentioned in the same sentence as former HPHS great Eddie Smoliak, a two-time medal winner at the state track and field meet who is now competing at the University of Illinois.

“I really want to beat his school record,” says Kirsch, referring to Smoliak’s 15-3 mark. “And I think that I can get that done by next year.

“I know that I have the speed and strength,” he adds. “I just need to get the proper technique down. I work on my form every day.”

And, he’s constantly looking for a competitive edge. He frequently clicks on YouTube to watch phenom Mondo Duplantis, a high school senior from Louisiana.

There might be a reason why Kirsch ended up on a pole vault runway. There’s lineage — and it goes back a ways.

One day, the Kirsch family had a “Hey look at this!” moment.

“I’ve learned that my great grandfather [on his mother’s side] was a vaulter,” says Kirsch. “My grandmother [Ronna Shapiro] found some pictures. She said, ‘Hey look at this!’

“I had no idea,” he adds. “But it looks like pole vaulting runs in the family.”

And that patriotic thing?

No doubt, that’s been passed down as well. There’s a reason why he wears a stars-and-stripes bandanna.

“One of the best parts of a track meet is the National Anthem,” Kirsch adds. “That’s my time to focus.” 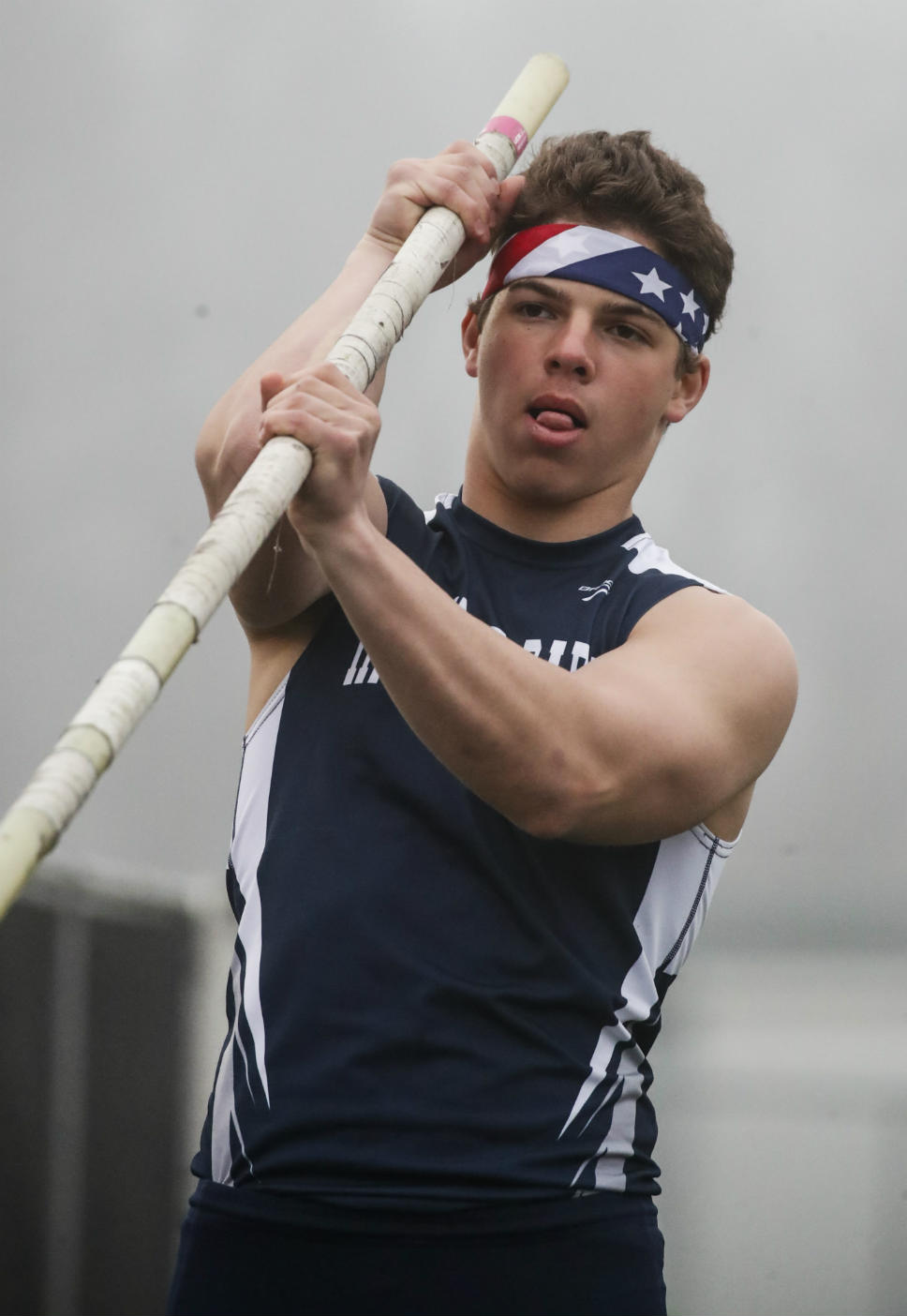 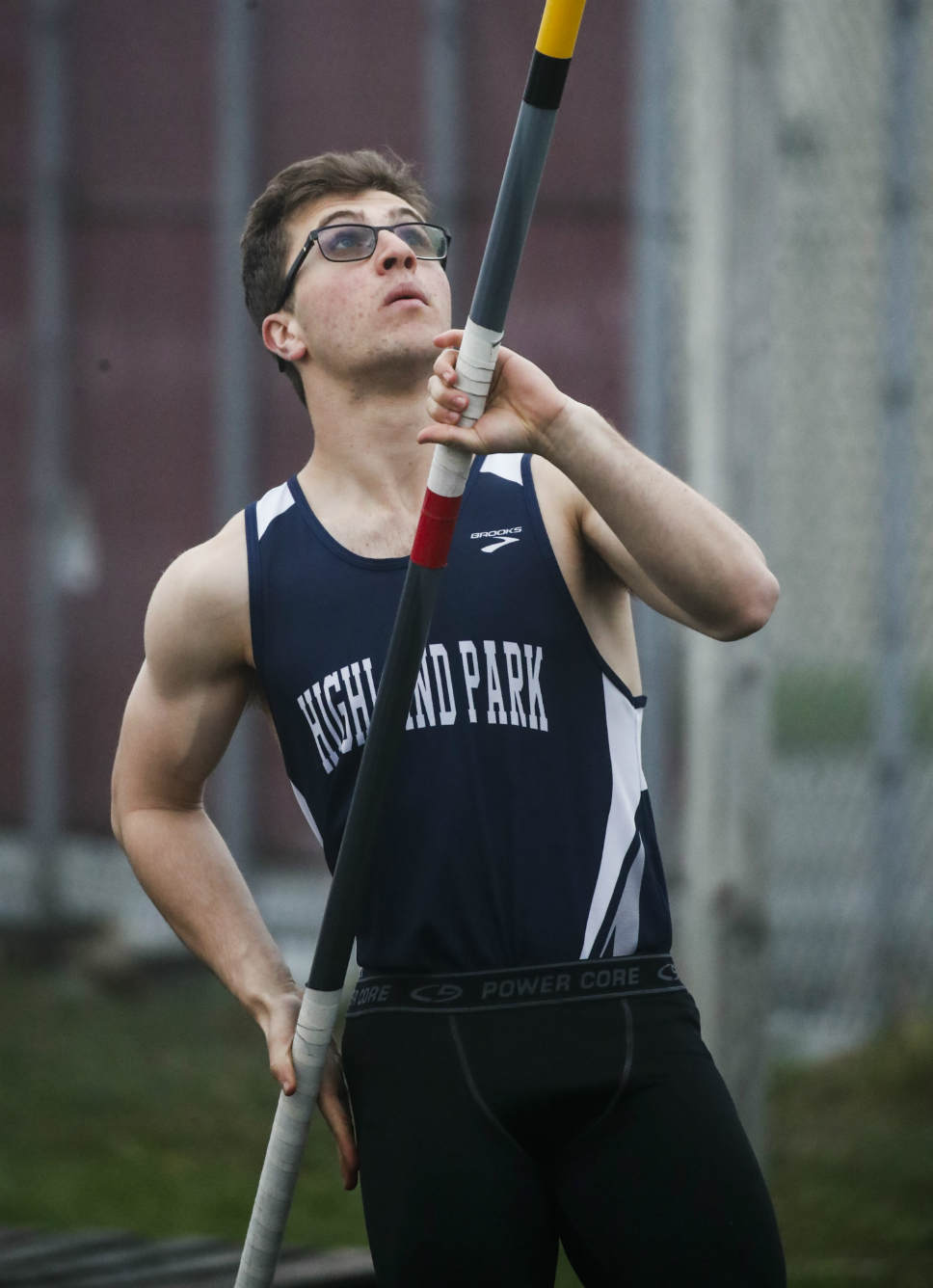 Ben Zavell of the Giants concentrates during the pole vault competition at the Lake County Invite. PHOTOGRAPHY BY JOEL LERNER