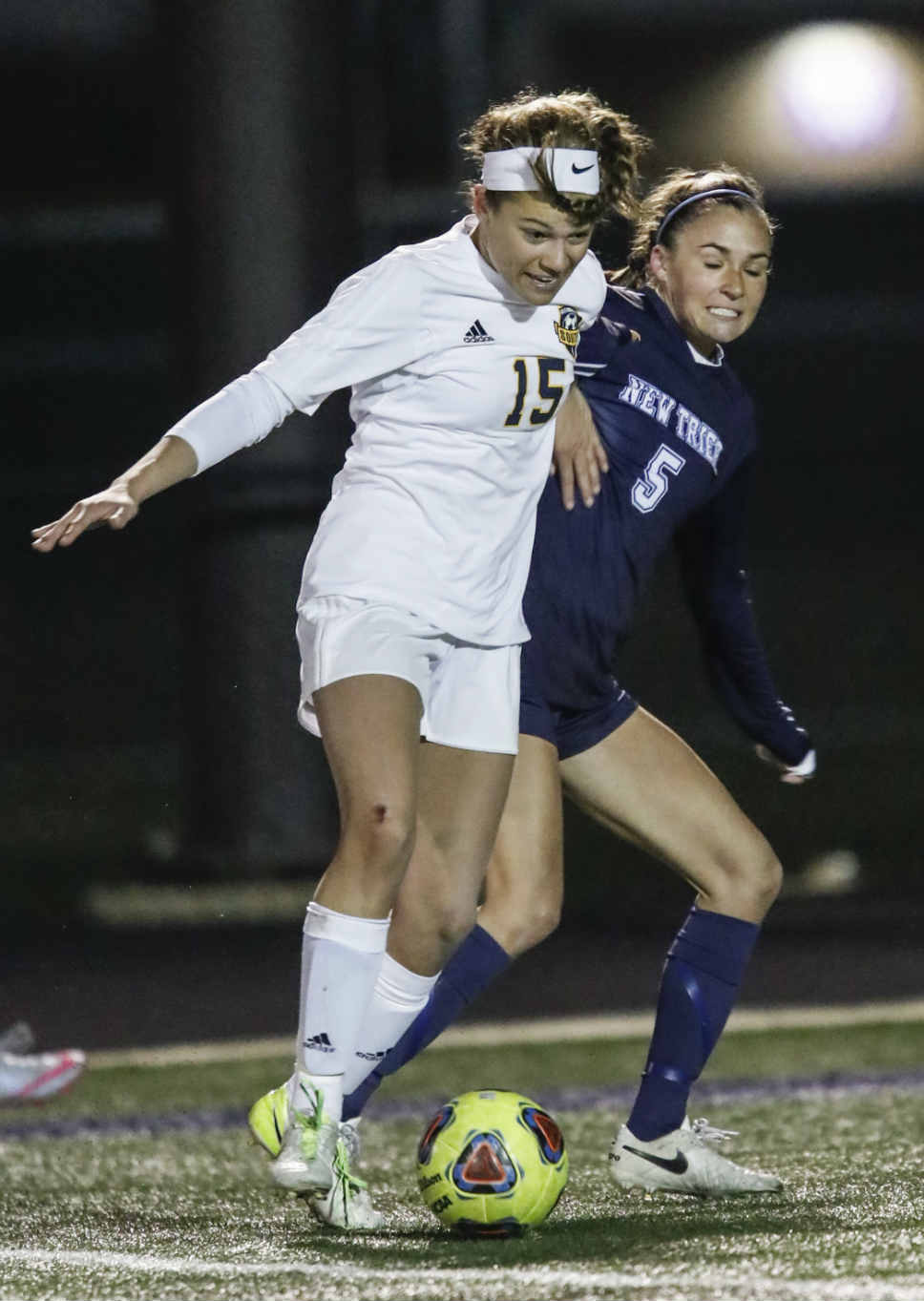 You could hide a soccer ball inside each of Makayla Stadler’s dimples.

The Glenbrook South soccer star’s facial crevices are that deep.

“Look at her,” Titans junior back Grace O’Brien says of the junior forward/midfielder. “Look at her when she smiles.

The ideogram with a heartbeat and sunshiny countenance has been a three-dimensional force this spring, scoring 14 goals — after netting nil in each of Glenbrook South’s first four matches — for a 12-2-4 squad.

“That didn’t bother me at all,” the 5-foot-8 FC United club player and third-year Titans varsity member says of her quiet start in 2018. “We were scoring and playing well.”

Stadler, a Villanova University recruit and a Class 3A all-sectional pick last spring, struck for both of South’s tallies in a 2-1 defeat of visiting Deerfield High School in a Glenbrook Cup semifinal April 27.

“She sees things I don’t see [in match action], and a lot of that has to do with her starting point-guard abilities in basketball,” Glenbrook South girls soccer coach Seong Ha says. “Makayla does something differently in every game … does something well in every game, and she’s as unselfish and versatile as they come.

“All I know is, when I see her do the special things she does in soccer, I sure am glad she’s playing for us.”

Adept at dribbling a ball with her feet in the spring and dribbling a ball with her hands in the winter, Stadler displayed a soccer move against Deerfield (13-3-1) last weekend that looked awfully familiar to area basketball fans. Stadler, with the ball at her feet and an overmatched Warriors defender in front of her, hesitated, created space, hesitated again, created some more space. Stadler kept advancing briskly; the Warrior kept retreating unsteadily.

A similar hesitation move on hardwood allows the cat-quick Stadler to blow by guards and perturb post players.

So did Stadler’s basketball teammates, including Vanderveen, and Titans girls hoops coach Steve Weissenstein last winter. The third-year varsity hoopster and Team Most Valuable Player paced a Class 4A regional finalist in assists (3.5 per game) and steals (3.4), averaged 8.6 points and 5.2 rebounds and shot 53 percent from two-point range.

Stadler’s assist-to-turnover ratio was the best on the team, a noteworthy feat since she also led the team in minutes with the ball in her possession.

“I think she’s the best athlete in the state, and when you combine that with her competitive nature, you have a tremendous basketball player,” says Weissenstein, who also teaches Stadler in his Honors Accounting class. “Makayla makes things happen. She creates havoc on the other team with her steals and deflections, and her quickness on offense enables her to get to the hoop to create shots for herself and her teammates.

“She is so unselfish,” the coach adds. “All she cares about is the team’s success.”

During a 16-team soccer showcase in Florida with her FC United team last year, Stadler didn’t just battle for 50/50 balls in matches against elite counterparts; she also was half in love with soccer and half in love with basketball. Scoring the goal late in a 1-0 victory increased her affection for the sport known as “the beautiful game”.

Villanova women’s soccer coaches witnessed Stadler’s game and deduced the dimpled one from Illinois would make quite an impression in Big East matches, beginning with the 2019 fall season.

“That was the best moment,” Stadler says of being the target of swarming, ecstatic teammates after her big goal. “That’s when I knew, when I really knew, soccer would be the sport for me in college.”

The decision won’t keep her away from basketball courts next winter, making Weissenstein one of the happiest — perhaps the happiest — man in Cook County. Glenbrook South’s basketball team would have lost quite a few games the last three seasons without the talents and indomitable will of Makayla Stadler; Weissenstein acknowledges that. Stadler’s leadership qualities? Immeasurable, yes, but who would dispute they’re at least triple-double valuable?

“Makayla sets a great example of how hard to play at every practice and in every game,” Weissenstein says. “As a leader she treats everyone on the team with kindness and compassion.

“I absolutely love the infectious, positive attitude she brings to the classroom and court. She is just a great kid, a pleasure to teach and coach.” 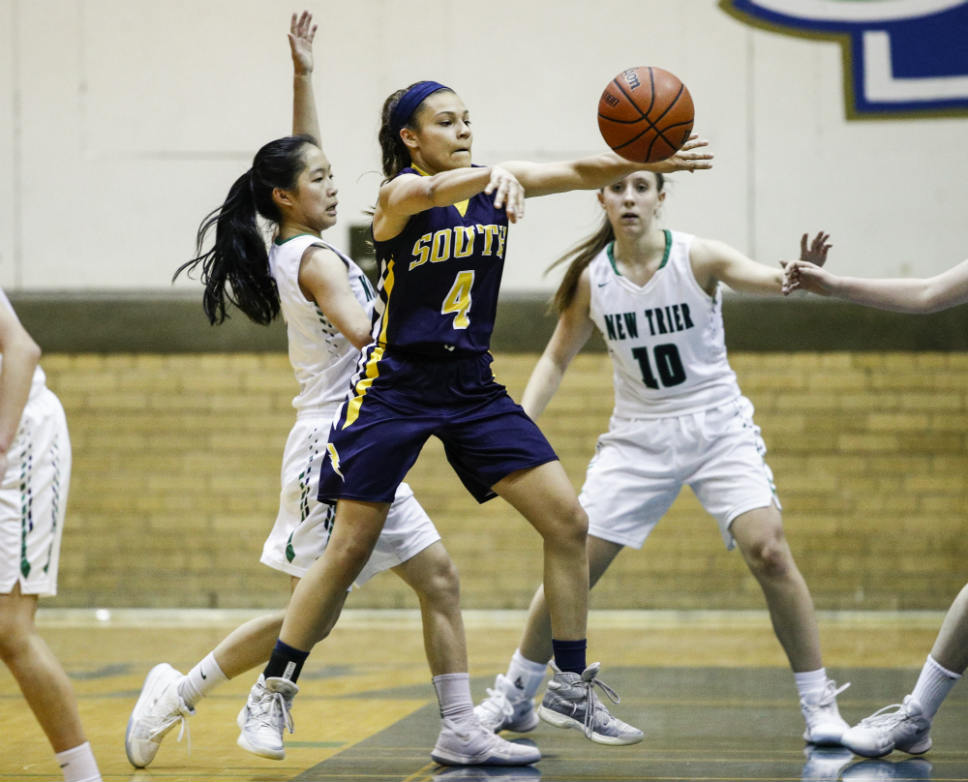 GBS’s Makayla Stadler makes a pass during basketball action against New Trier in the winter. PHOTOGRAPHY BY GEORGE PFOERTNER