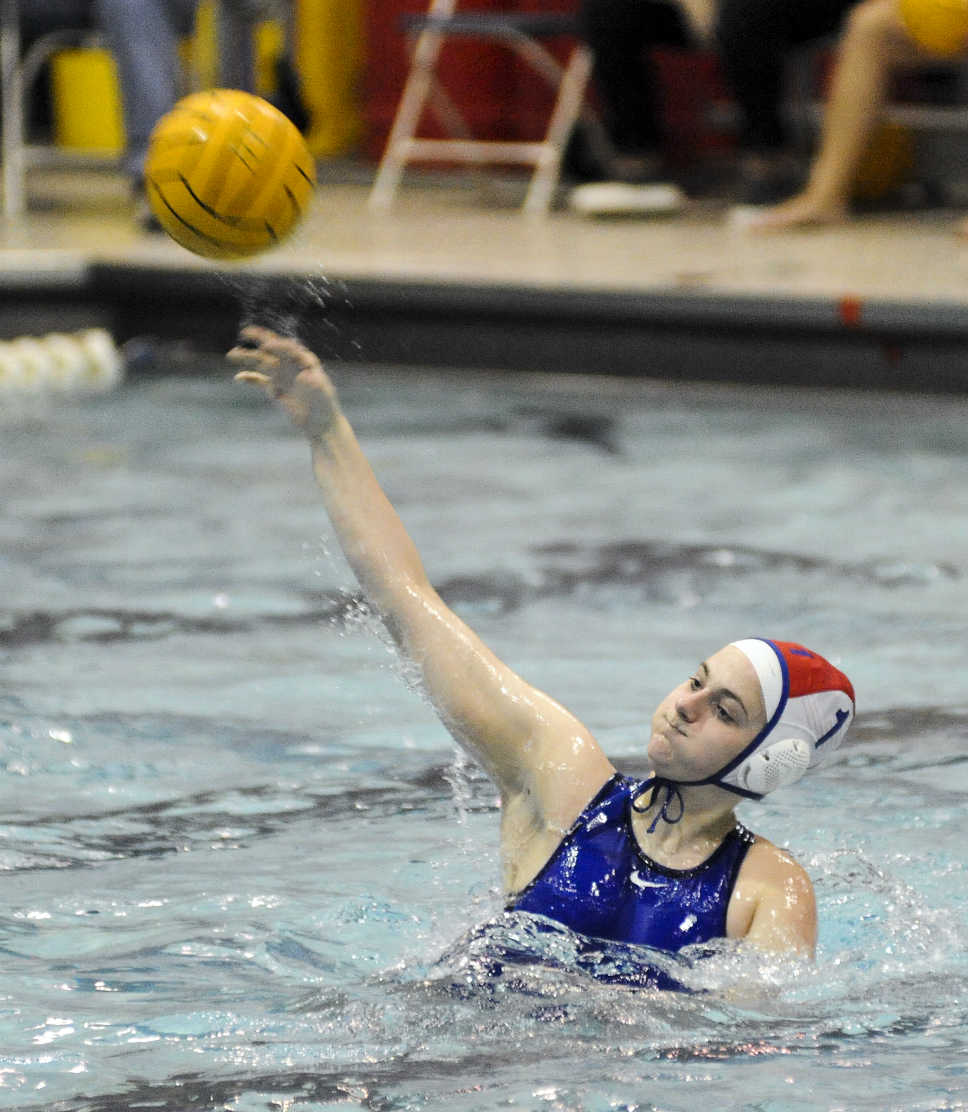 Scouts goalkeeper Amalia Liguori-Coneff fires in a goal from long range in a game at New Trier last week. The senior has scored five goals this season, including a last-second game-winner against Libertyville. PHOTOGRAPHY BY GEORGE PFOERTNER

Lake Forest High School girls water polo coach Anna Colletti held up her left hand and shook it near the end of a game last month.

Singer Beyonce did that often in her “Single Ladies (Put a Ring on it)” video.

The gesture from Colletti was for Scouts senior goalkeeper Amalia Liguori-Coneff on April 17. The hand signal meant, Shoot the ball. LFHS and visiting Libertyville High School were tied 3-3 at the time, with the ball in Liguori-Coneff’s right hand and four seconds remaining in the fourth quarter.

The goalie, bobbing more than half the length of the pool from the Wildcats’ goal, heard the shout of senior teammate Holly Malnati’s little brother, 11-year-old Rudy, who hollered from the stands, “Go, Amalia!”

Liguori-Coneff then whipped the ball like a baseball outfielder would in an attempt to throw out a base runner at home plate.

As Liguori-Coneff’s shot — it appeared to resemble a highly effective, high-arcing screwball — spun and descended near her Wildcats counterpart, the buzzer signaling the end of regulation sounded.

One second later, the ball splashed behind the LHS keeper.

Liguori-Coneff’s teammates in the water sprinted toward her as fast as they could to celebrate the moment. Reserve players popped off the bench and entered the pool to do the same. They engulfed Liguori-Coneff and fun-mobbed her, with one of her teammates hoisting the 5-foot-6 keeper (think of a WWE move) above the surface of the water for a second or two.

“One of the coolest things, experiencing what I experienced after that game,” says Liguori-Coneff, who scored again as a goalie in a 5-1 loss to host New Trier April 26. “Honestly, when I take a shot like that, I’m not sure where it will go.

“I aim, and sometimes it goes in.”

Colletti, the Scouts’ first-year coach, aimed and fired often as a Resurrection High School polo keeper in her senior season at the Chicago school. Colletti amassed an astounding 23 goals to edge a field player’s goal total by one for team-high honors.

“Her arm, her attitude, her spunkiness,” Colletti says of what thrills her about what Liguori-Coneff brings to the watery table on Game Days. “She amps up the team with her family-oriented nature. And the insights she shares in our huddles, they’re valuable and timely. She’ll say, ‘Hey, watch No. 9; she’s fast.’ Or, ‘Hey, No. 12 likes to shoot from a certain spot; make sure you guard her closely from there.’ Little reminders. Amalia is good at giving those and communicating in general.”

Liguori-Coneff threw a ball for the first time at the age of 4 or 5.

It wasn’t a water polo ball; it was a baseball.

Little Amalia played catch in the front yard with her mother, Claudia. Dad Patrick would sometimes join them — as a batter, digging in on a patch of grass to face his daughter’s pitches.

“Lots a quality time with my parents, out there on the front lawn,” says Marquette University-bound Liguori-Coneff, who might try out for the Milwaukee college’s co-ed water polo team. “I remember a brown spot in the grass, where home plate was.”

A field hockey player and JV swimmer in her freshman year, Liguori-Coneff went out for water polo in the spring of that year after Moore and Malnati had convinced her to do so.

“One of my first thoughts was, ‘Maybe I’ll make new friends in a spring sport,’ ” Liguori-Coneff says.

Lake Forest High School’s starting goalkeeper in the 2016 season requested playing time in the field in the final two games, paving the way for the start of Liguori-Coneff’s career in goal. The rookie keeper then joined Stevenson-based Northern Illinois Polo Club (NIPC) in the summer before her junior year.

“That summer, for me, was like going through an entire year of water polo training and games,” Liguori-Coneff says. “I learned a lot. I learned about what you have to do to block lob shots, block backhanded shots, block skip shots. My communication skills, while leading and directing my defenders, improved, and I worked on making safer [outlet] passes.”

Her goal total this spring: five.