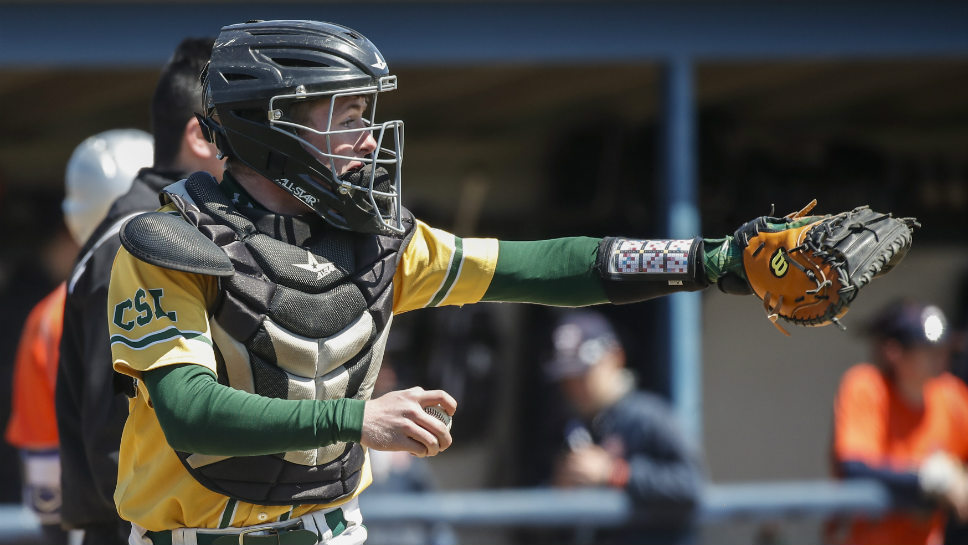 After tagging out an Evanston runner at the plate on a double-steal attempt, Glenbrook North catcher Daniel Spencer points to shortstop Chris Karasinski, who made a perfect throw on the play. PHOTOGRAPHY BY JOEL LERNER

For Daniel Spencer, the only way to walk off a baseball field is in a dirty uniform.

The dirtier the better.

A self-described throwback, the Glenbrook North senior catcher is a grinder and a “grimer” and a darn good player.

In an April 26 game against visiting Vernon Hills, the left-handed swinging Spencer reached first base on a hot-shot single to right field.

Then, with one out, the speedy backstop, who has swiped 8 of 10 bases this spring, went first to third on a sharp single to right by left-handed hitting George Korompilas.

Two things to notice on that play. First, Spencer turned on the jets and slid headfirst into the third-base bag … even though the Cougars didn’t make a play on him.

“Getting down and dirty and being safe is a lot better than being up and out,” said Spencer.

Secondly, despite being covered in dirt, he didn’t dust himself off.

He also was one with the dirt, when he used another headfirst slide to swipe third base in the third inning.

“He does like to get dirty out there,” said GBN teammate Chris Heywood. “His desire to play this game is off the charts.”

Spencer makes no apologies for his hard-core mindset.

“The way I see it, baseball players are meant to play the game like dirt bags. And I’m fine with that term,” said Spencer, who also was a two-year starting goalkeeper on the highly successful Glenbrook North boys soccer team. “That’s how you’re supposed to play the game.

“At Glenbrook North, we’re taught to be scrappy,” he added. “Take the extra base. Grind out at-bats.”

Spencer, who will play Division III baseball at Denison University in Granville, Ohio next year, has that next-level mentality.

With his good eye and plate discipline, Spencer, who was the starting designated hitter last spring, has developed into an ideal No. 2 hitter for the Spartans (13-5). He puts up winning numbers. He’s hitting .328 with 18 runs scored. And he’s drawn a walk in 11 of 17 starts, while he has struck out only six times.

“I always go up there with a plan,” said Spencer. “I’m always looking to hit the ball hard somewhere. And sometimes, I miss. I’m human.”

Spencer went 1-for-3 with a two-run single in GBN’s 5-3 loss to host Evanston on April 28. That seventh-inning single extended his hit streak to eight games. Six of his nine RBIs have come in the last five games.

Meanwhile, turning a negative into a positive was one of his plays of the game in GBN’s 10-4 win over Vernon Hills. In the fourth inning, he took a called third strike on a pitch at his knees and on the inside corner.

Instead of doing a U-turn back to the dugout, Spencer turned opportunistic. He bolted down to first, when the Cougars catcher dropped the ball.

“You always have to finish the play,” said Spencer. “I heard Coach Savino yelling, ‘run!’. But I was already running.”

End result? His hustle paid off. He kept the inning alive — and eventually scoring — by reaching on the catcher’s throwing error.

“Daniel can impact a game in many ways,” said Savino.

“He’s extremely coachable,” the coach continued. “And he’s got a great makeup. His approach is always consistent. No highs. No lows. And, as good as he is as a player, he’s an even better person and teammate.”

Being steady and even-keeled works to Spencer’s advantage on the field and in the dugout.

“He never mopes. Never gets down on his teammates,” said Heywood. “He’s got a great attitude. He’s a positive guy. We’re lucky to have him.”

Spencer, who plans to major in biology at Denison, has become a student of the mental game.

“I’ve had to learn how to shake things off,” Spencer said. “I used to struggle with that. Getting down on myself used to affect my game.

“But [GBN assistant coach] Justin Weiner taught me how to take away the frustrations of this game,” he added. “Five seconds and flush. Get it out of the your head as quick as you can. If you are not strong mentally, you’re not going to be successful.” 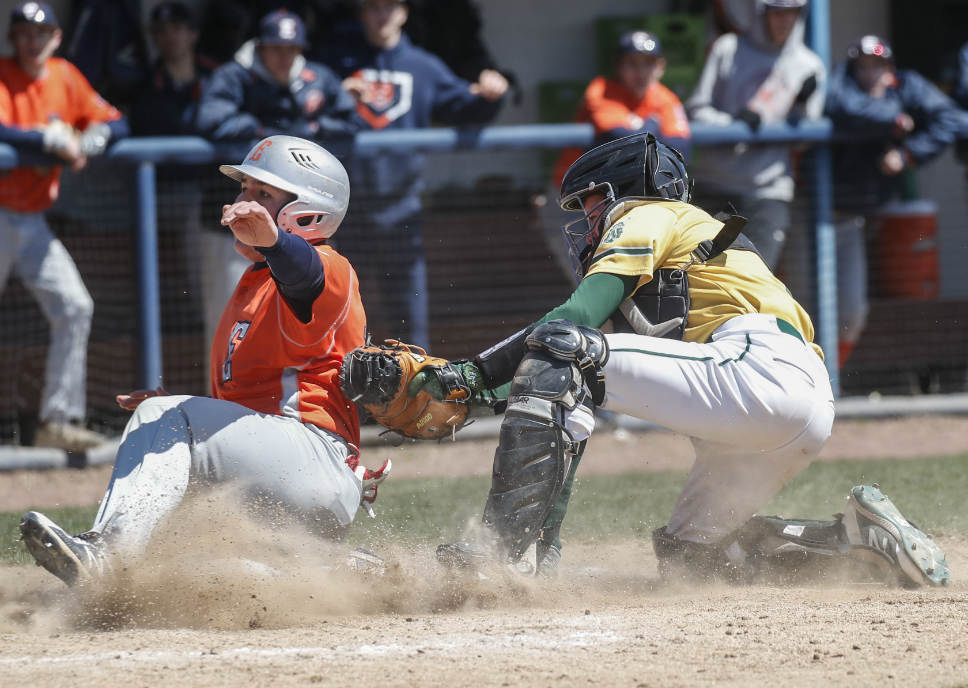 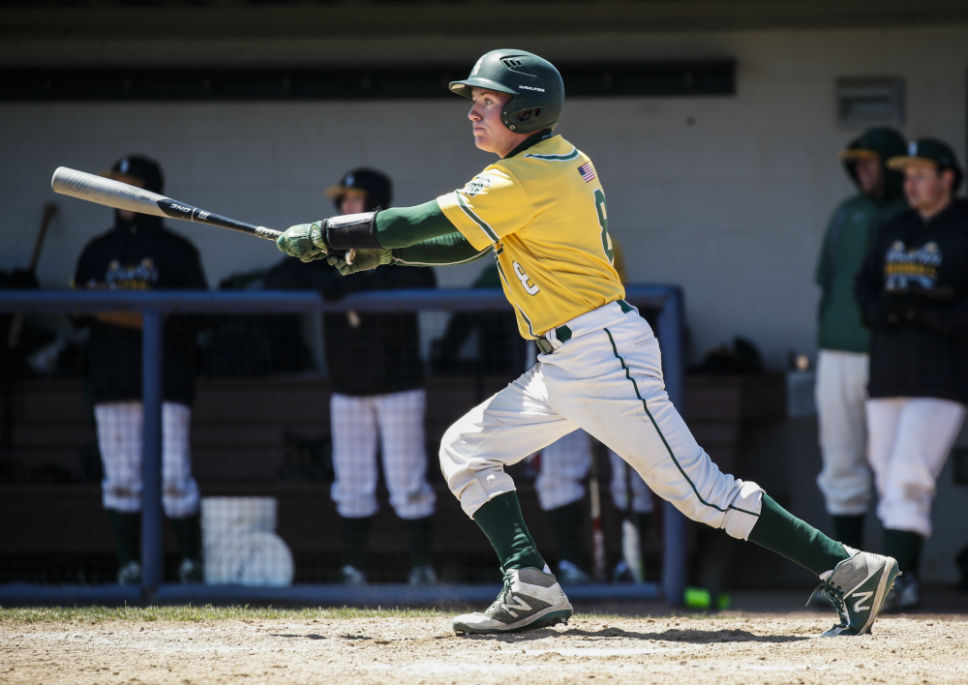 Daniel Spencer swings away during GBN’s game against Evanston. PHOTOGRAPHY BY JOEL LERNER 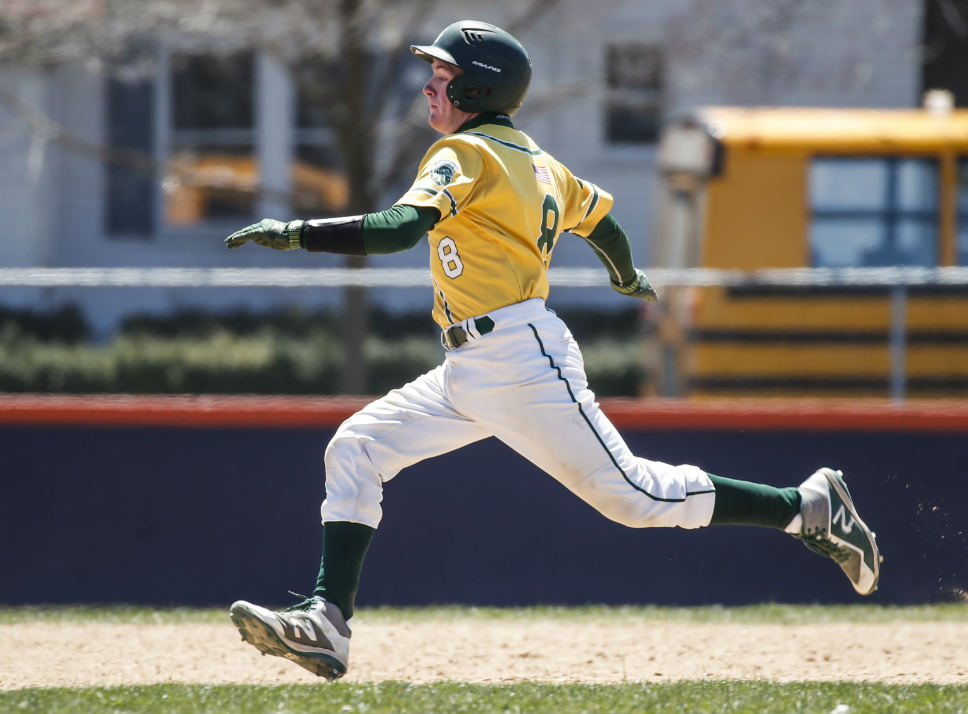 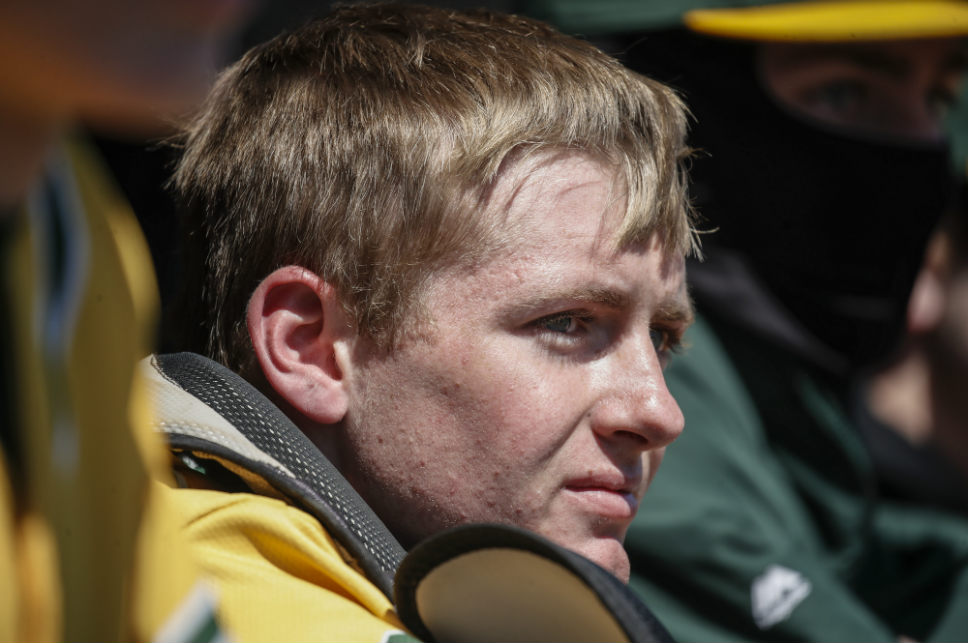