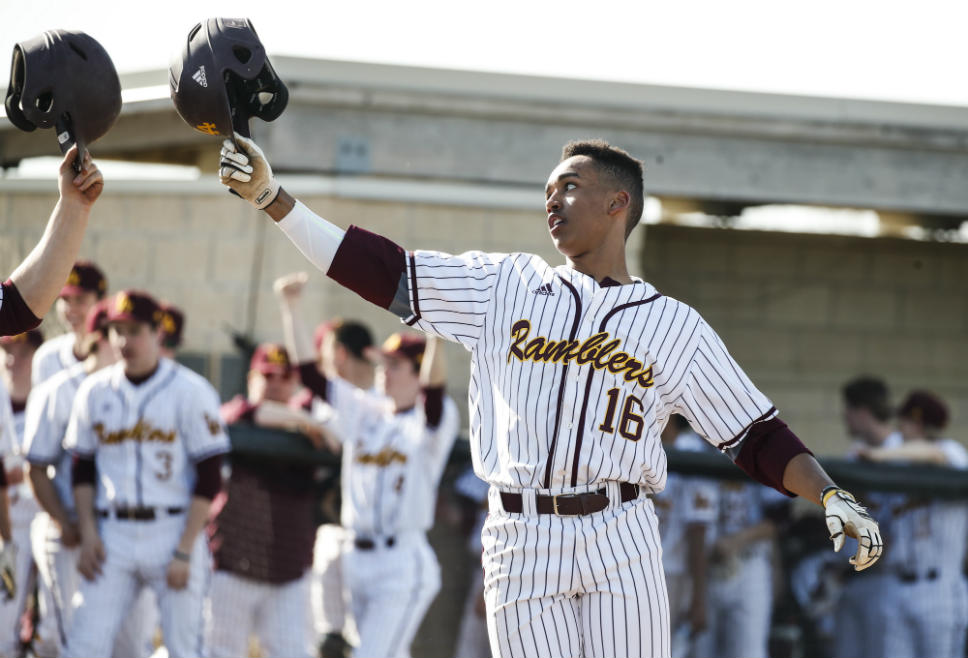 Loyola Academy’s Trey Torain taps helmets with a teammate after hitting a leadoff home run in the team’s 17-15 win over Marmion Academy. He had two round-trippers in the game. PHOTOGRAPHY BY JOEL LERNER

At the start of the season, he was penned in as a middle-of-the-order guy.

Putting him in an RBI slot looked like a sound plan.

In fact, it appeared rather obvious.

That’s where you put a guy like Trey Torain, right?

There’s a lot of pop in his bat. So just turn him loose and watch him terrorize opposing pitchers.

But, for some reason, hitting in the heart of the order didn’t turn out so well for the extremely gifted 6-foot-1, 180-pound Torain.

In the first 13 games of the season, the Loyola Academy senior couldn’t find his stroke. He was getting buried at the plate. He had just four hits in his first 28 at-bats — a .143 batting average.

So, LA head coach Nick Bridich decided to do something bold with his prized outfielder.

He shook things up a little. He tinkered with the batting order. He put Torain’s name at the top of the lineup card.

At the very tip-top.

And, it has proven to be … a stroke of genius.

Hitting leadoff has worked wonders for this wunderkind, who will play Division I baseball at George Washington University in Washington D.C.

Torain has excelled in his new domain. He’s become the ignition switch for the Ramblers’ offense.

“We just felt like this was the best thing for Trey,” said Bridich. “When he was hitting in the middle of the order, he was trying to slug. But that wasn’t working. He struggled. He put too much pressure on himself.

“We put him at leadoff, and he took off right away. He’s taken to it unbelievably well,” the LA coach added. “I think hitting there is a good fit for him — because of the way he can run [11 steals] and because of strike-zone awareness [12 walks].”

Despite having some early reservations, Torain quickly embraced his new role.

“I was a little nervous about it at first,” said Torain, who played his club baseball with Top Tier. “In all of the years of playing baseball, I had never hit leadoff.

“I didn’t know what to expect,” he added. “But, it’s working. I’m just trying to get on base, use my speed. The game is not always about the long ball. I’m not trying to be flashy. Just trying to help the team win.”

Since the switch, the right-handed hitting Torain has been on a tear. He’s developed a penchant for the role. He’s hit safely in six straight games. In those six games (through April 30), he’s batting .500 (11-for-22) with 12 runs.

“Hitting leadoff has changed his M.O. [modus operandi],” said Bridich. “He had to focus on something completely different. He’s had to look at things in a different way. His offensive goal now is get on base and score at least two or more runs per game.”

LA’s cleanup hitter Jason Vrbancic is thrilled to be batting behind Torain.

“He’s the fastest guy on the team,” said Vrbancic. “So, it makes sense that he’s the leadoff hitter.

“And it looks like he’s found his stroke,” the LA senior catcher added. “He’s doing a great job of getting the offense going. It’s always good to start a game with a guy like him.”

And that thump? Torain still has that.

Torain went 4-for-5 with three runs, two RBIs and one steal.

“You can see his confidence growing,” said Vrbancic, who will play baseball at the University of Chicago. “He’s stacking up good at-bats.”

He was equally effective in LA’s 8-6 loss to visiting Mt. Carmel on April 28. In that one, Torain excelled as a leadoff hitter by going 2-for-3 with three runs and one stolen base

For Torain to find his groove is no surprise. He’s a toolsy player, who entered the season ranked as the state’s 10th best outfielder — and 65th overall — in the class of 2018 by The Prep Baseball Report.

“My dad supports me in whatever I do in life,” said Torain.

And, no doubt, Trey Torain, who resides in Evanston, would have been terrific carrying a pigskin. He runs the 60 dash in 6.69.

That speed, combined with a strong and an accurate arm (clocked at 87 miles per hour), also serves him well in the outfield.

With Torain in right, senior Will Jackson in center and junior Jake Novak in left, Bridich has put together a “million dollar” outfield.

“Our outfield is pretty solid,” said Vrbancic. “They can hit, field, throw and run.”

“It’s pretty good,” Torain added. “Just look at it and see for yourself.”

Off the Notepad: Trey Torain’s brother, Ethan, is a sophomore who competes on the Loyola Academy crew team. … Torain is service-minded — when he’s not playing baseball and hanging out with his friends. He’s a volunteer with a program which helps underserved kids in Evanston. “That’s been awesome,” said Torain. … His favorite music? It’s eclectic. “Country, rap and some rock. I’m all over the place,” he said. … And television binge-watching? “I love Friends, It’s Always Sunny in Philadelphia and How I Met Your Mother,” he said. “I go for the easy laughs.” … Torain has played his club ball with Top Tier since he was 13. Last summer, he teamed with New Trier’s star catcher, Cam Redding, on 17U Americans squad. And it was at a tournament in Cincinnati, when Torain caught the eye of the George Washington coaching staff. “Trey has got all of the physical tools. He’s an all-around player. He’s just going to keep getting better. I’m sure that he’s going to have a great college career,” said LA coach Nick Bridich. … In LA’s 17-15 win over visiting Marmion Academy, the Ramblers hit eight home runs. Jake Novak, who went deep twice, was Mr. Dramatic as he socked a three-run, game-winning homer in the bottom of the seventh. 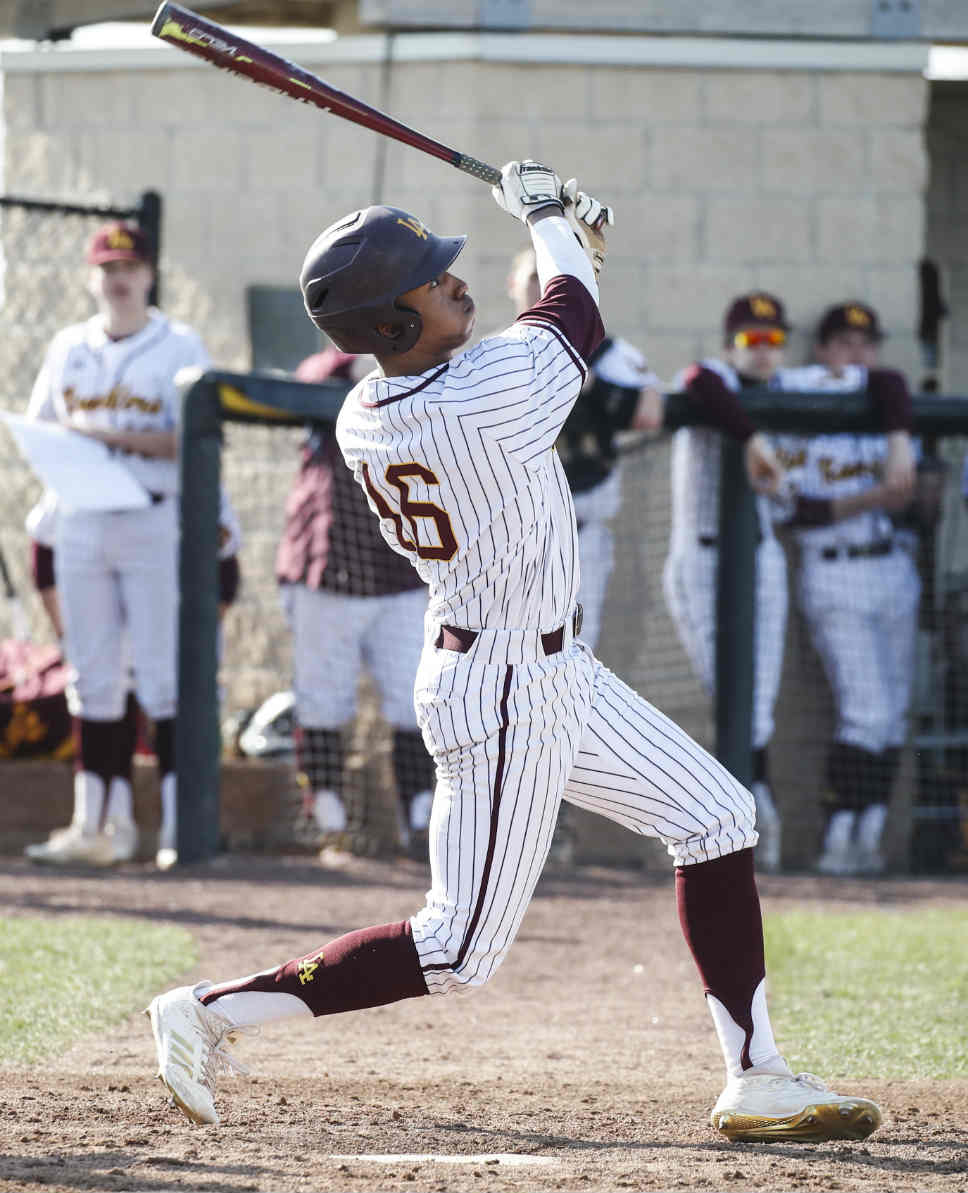 Trey Torain of the Ramblers follows through on his home-run cut in the first inning against Marmion Academy. PHOTOGRAPHY BY JOEL LERNER 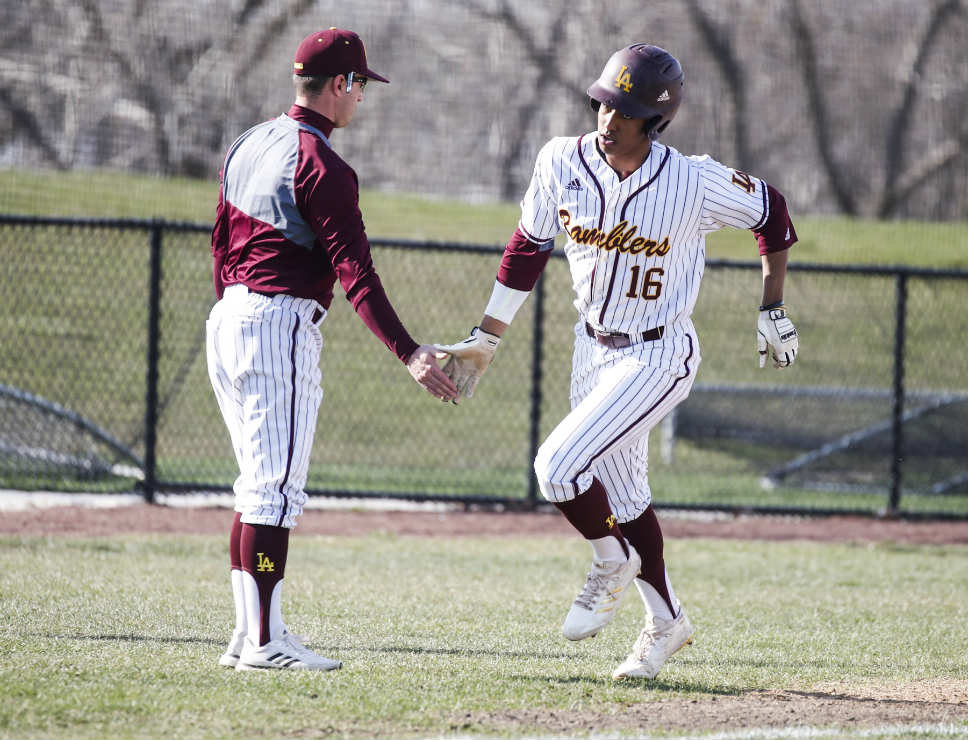