GLENVIEW – More than 250 people made an afternoon pilgrimage to Gallery Park in Glenview on April 28 for a spring rite: Fish Release Day at Lake Glenview, an annual public event where thousands of fingerlings are deposited into the water in preparation for summer.

Regularly stocked with largemouth bass, walleye, fathead minnows, green sunfish, channel catfish and bluegill, the 45-acre Lake Glenview set within the 142-acre Gallery Park is a popular spot for recreational anglers, who catch and release from various points around the shoreline.

Last summer, the Park District legalized the use of non-motorized kayaks, canoes and rowboats on Lake Glenview, giving sport fisherman the opportunity to cast their lines in deeper water.

Up until 2017, officials from the Village of Glenview had stocked Lake Glenview with fresh fish each April to little fanfare. That changed last spring, when the Rotary Club of Glenview Sunrise, together with the Glenview Park District, decided the fish release should become a public, educational event.

“We wanted to make it free and open to families,” said Vince Manzella, the Rotary’s president-elect. “Everyone thought it would provide a good lesson for kids.”

In addition to underwriting the cost of Fish Release Day, the Glenview Sunrise rotary organized a food drive at the event. A large container of canned and dry goods collected on site was later delivered to the Northfield Food Pantry.

Using bright red buckets donated by Weis Ace Hardware on Waukegan Road in Glenview, children brought shoals of fathead minnows and bluegills to the water’s edge, often pausing for a quick parent photo before sending the tiny fish whizzing down a small, white slide into the lake. About 7,000 fish were released.

Glenview residents Kristina and Adam Baxter brought their two children, Violet, 3, and Adam, 1, to Fish Release Day to prepare them for the fishing they plan to do together this summer. Violet, who attends preschool with the Glenview Park District, already owns a green, collapsible mini-fishing rod.

“Fishing is a great way to get outdoors,” said Adam. “I did it when I was a kid.” 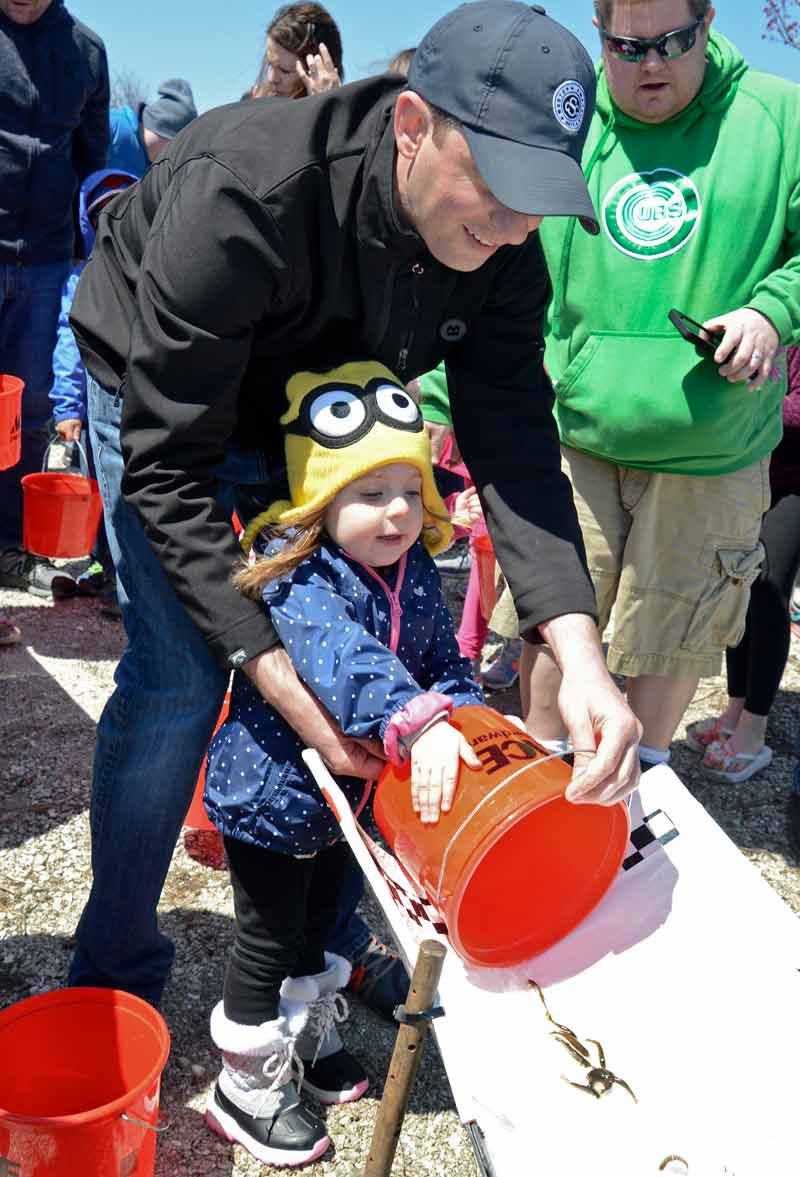 Jeremy Ferentz and his daughter Lucy, 3, watch minnows take a ride down a slide into Lake Glenview on April 28. PHOTOGRAPHY BY GEORGE PFOERTNER/JWC MEDIA 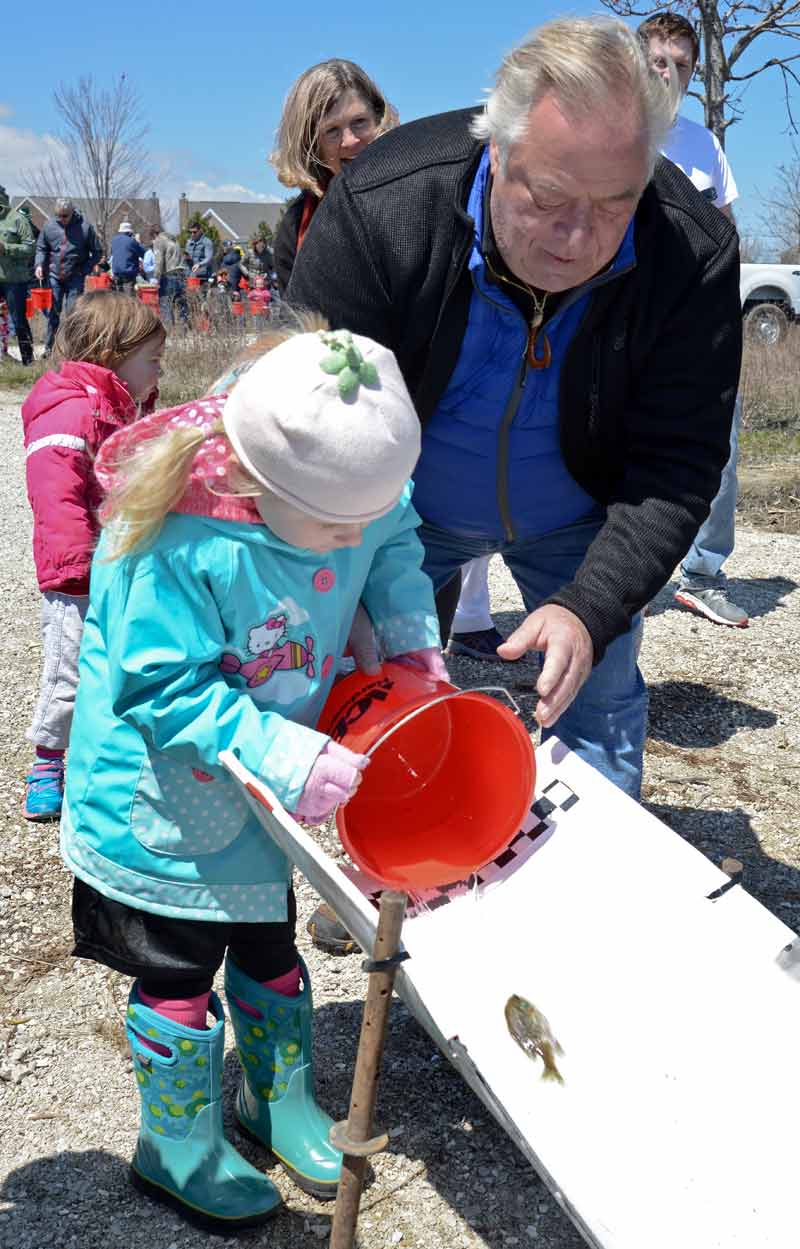 Dale Freiburger and his granddaughter Noelle Olds, 4, watch as a bluegill fingerling rides down the slide into Lake Glenview at the Glenview Fish Release Day. PHOTOGRAPHY BY GEORGE PFOERTNER/JWC MEDIA

Lake Glenview is man-made and serves as stormwater retention for the surrounding area. And while the Glenview Park District maintains Gallery Park, Lake Glenview falls under the purview of the Village of Glenview.  It’s the village that restocks the lake with fish each year, paying close to attention to balancing supplies of various species.

When the Glenview Park District created Gallery Park 20 years ago, around the same time the Glenview Naval Airbase was converted to retail and residential use, district officials envisioned a family friendly open space for the Glenview community. The park’s six miles of meandering bicycle trails and hiking paths coexist peacefully with native wildlife, and the lake’s shallow ledges and submerged trees provide a thriving fish habitat, replenished each year with the park district’s annual fish release.

“Stocking the lake with fish also promotes a healthy ecosystem within the park and provides food for migratory birds and other wildlife,” said Judy Ksiasek, environmental education supervisor with the Glenview Park District.

Local fishing activist and enthusiast Don Dubin mingled with families at the event, sharing his strong views on the benefits of fishing for sport.

Dubin, who grew up angling in lagoons and waterways around Chicago, is an expert taxidermist, a world champion fish carver and “legendary angler” in the Fresh Water Fishing Hall of Fame. In addition to sitting on the Fishing Advisory Boards for the City of Chicago and the Shedd Aquarium, Dubin was also a founder of Salmon Unlimited, the group that spearheaded Lake Michigan salmon stocking in the 1970s.

Dubin feels strongly that Chicagoland’s fish habitats be maintained and preserved for future generations of sport fisherman. He regularly leads instructional fishing trips on Lake Glenview for kids and adults.

“Fishing gets people out of the house… looking at birds and wildlife,” said Dubin. “Kids aren’t doing that enough today.”

Dubin has converted two floors of his Lincolnwood home into the largest fishing museum “anywhere.” He praised the Glenview Park District’s efforts promote fishing among the local populace.

“It requires time and effort,” said Dubin. “But Lake Glenview is fantastic. They do a great job of keeping it well stocked.” 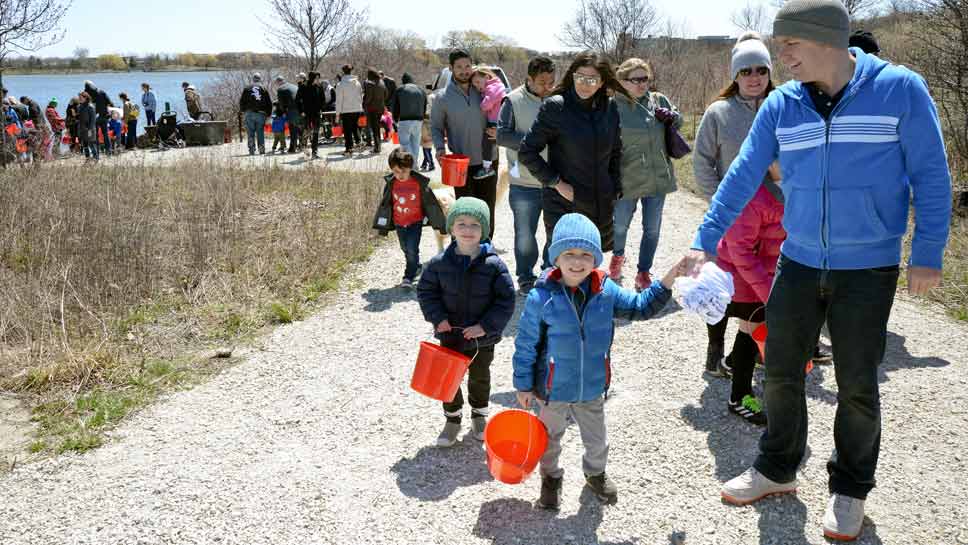 Matt Stuebe, far right, holds hands with his son Ben, 4 and half, as Ben’s brother Luke, also 4 and a half, follows to return their buckets after releasing their fish into Lake Glenview. 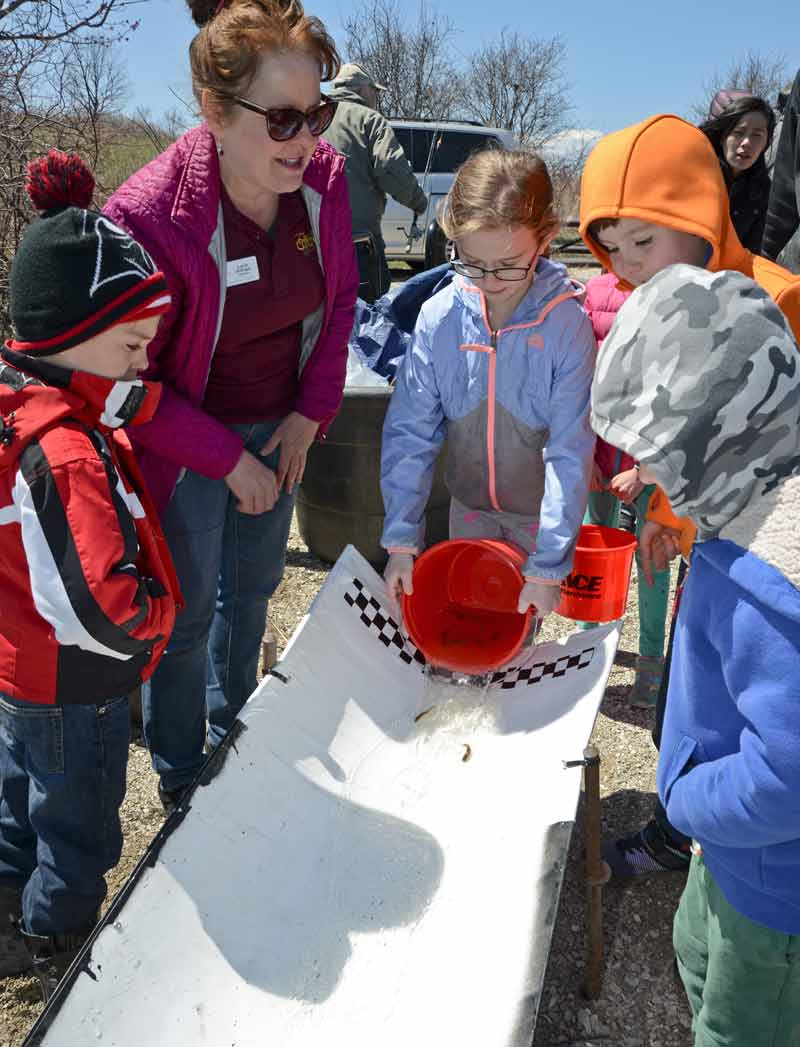 Lorin Ottlinger, director of The Grove, explains the fish release procedure to Zoe Wolfman, 8, and a group of excited children. PHOTOGRAPHY BY GEORGE PFOERTNER/JWC MEDIA. 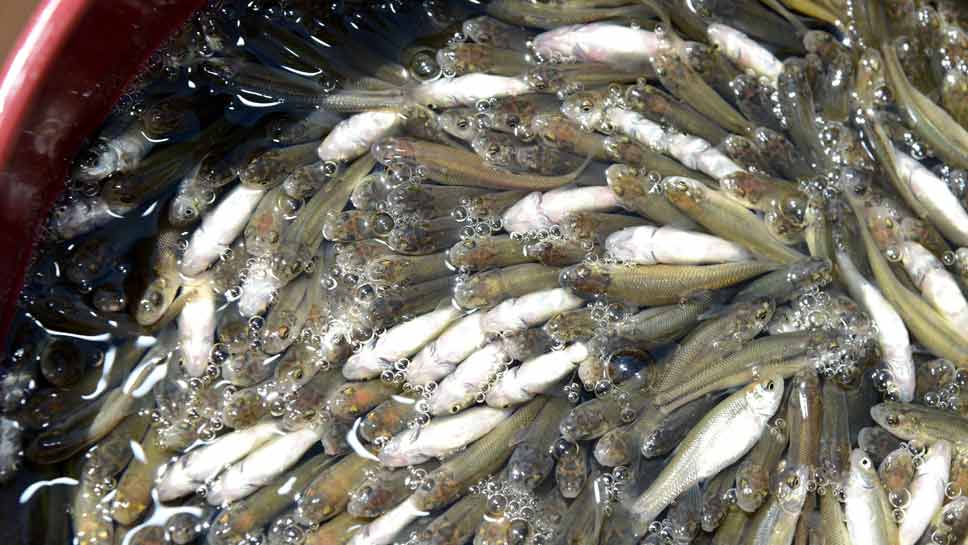 Minnows ready to be released into their new home.