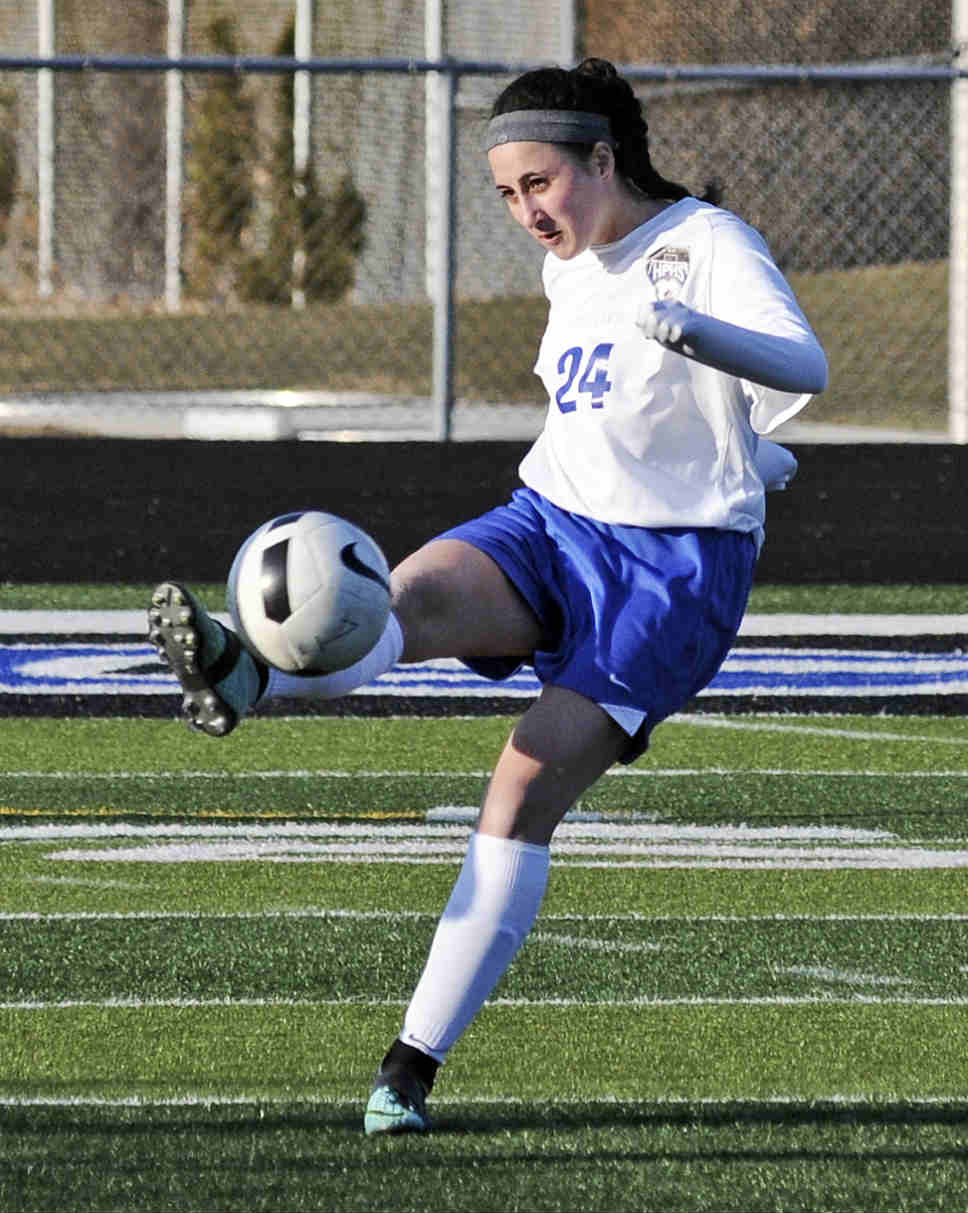 On the morning of April 21, before the start of the Giants’ 9 a.m. home soccer match against North Shore Country Day, Stahlberger had to change her right sock — and her left sock, along with the rest of her uniform.

The 5-foot-6 junior midfielder had arrived in the team’s “away” togs at Wolters Field.

“I don’t do mornings!” a smiling Stahlberger yelled to nobody in particular as she removed her black socks hurriedly, hoping to put on her home white socks in time for the kickoff. (The 2017 all-Central Suburban League North pick and third-year varsity member wouldn’t enter the contest, a 3-1 HP victory, for junior midfielder Katie Zurek until the 11th minute.)

“Terrible morning person; that’s Sarah,” cracked Giants girls soccer coach Kate Straka, who, out of necessity, has held some practices as early as 6 a.m. this spring. “She might be absentminded at times, but many absentminded people are also geniuses.

“Sarah,” the coach added, “is such a thinker, always thinking, always looking for that opening, that edge, to help her come out on top. Two words come to mind immediately when I think of her — competitor, gamer. Sarah wants to win everything, even the fun drills we do in practice.”

Stahlberger’s fun side surfaced at a practice in her freshman season on varsity in 2016. The team was working on corner kicks, and Stahlberger got the idea to arrange at least 10 scattered soccer balls into a bed of at least 10 organized soccer balls.

“I then decided to sit on top of the soccer balls for a while, wondering if anybody would notice me,” Stahlberger recalled.

Opposing teams are discovering they cannot rest for a second when a soccer ball is at either of Stahlberger’s feet. The savvy booter with Chicago Magic club experience had scored six goals and assisted on three others through April 21, with two of the assists (on junior forward Jolie Carl goals) coming on the day she wore HP’s dark and light threads in a span of an hour.

Stahlberger connected with Carl in each half in that 3-1 defeat of NSCD last weekend.

“Sarah means a great deal to the team; she’s the core of our midfield, the one who’s so good at starting our counterattacks,” Giants junior starting back Ryan Cary said after HP improved to 6-4-1 on April 21. “With her consistency and with her ability to kick solid through balls, we know we’ll always be able to compete well as a team.”

A soccer midfielder without good vision is a soccer player with a need to look for another position — or another sport. Stahlberger’s vision on pitches is one of her strengths, right up there with her knowledge of the game. Highland Park’s alert afternoon/night person knows exactly where a hustling teammate will be to meet up, in stride, with a precise Stahlberger lead pass.

“You need to be vocal,” Stahlberger said of another critical midfielder trait. “I like to communicate with our defense and our offense. I like dealing with everybody, leading everybody, and it’s my job to tell people where they should be and where they should go. My major responsibility with our younger players is to be a guide for them in any way possible.”

Stahlberger no longer plays competitive tennis, which is a shame. Who wouldn’t want to see Stahlberger serve with her right hand in an intense Highland Park-Deerfield dual meet, rush the net and then flummox a Warriors netter by crushing an overhead winner with her left hand?

A huge Star Wars fan, as well as an enthusiast of action movies, Stahlberger plans to direct her focus on academics at a big college rather than try to juggle classroom and soccer commitments. Sports medicine interest her.

So does interior design.

But she had two completely different things on her mind after a soccer match on a crisp morning last weekend.

She would polish off those items during a team breakfast at a Once Upon a Bagel table later that morning.

Fork in the right hand, glass in the left?

Or maybe the other way around.

Notable: Highland Park High School’s girls soccer team is 2-1 in the Central Suburban League North. … Giants senior forward Kirby Bartelstein (on an assist from senior midfielder Allie Pine) scored the first goal in HP’s 3-1 defeat of visiting North Shore Country Day on April 21. Freshman keeper Morgan Cohen (1 goal allowed, first half) and sophomore keeper Sydney Salgado (second half) shared the time in goal for the victors. Tireless Giants senior forward Sarah Shiner positioned herself well for scoring opportunities in both halves, coming very close to notching a goal near the midway point of the second half. “Sarah,” a bench player said to the other reserves, “really wants it today.” Shortly thereafter, Shiner delivered a right-on cross to Pine for another scoring chance.