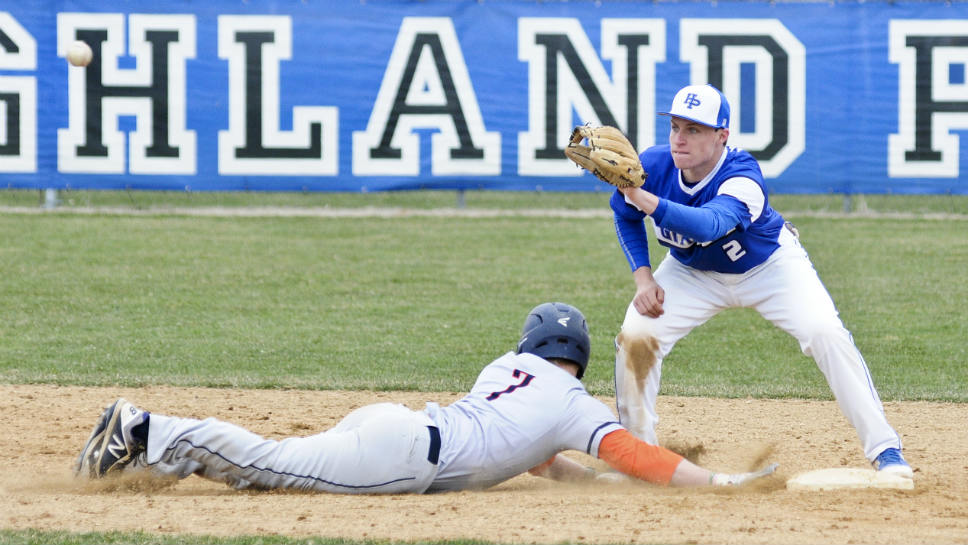 Noah Shutan had the patience of Job and the laser vision of a superhero last spring.

He walked a state-best 48 times, which translated into a lofty .618 on-base percentage.

He also finds it a bit paradoxical.

“Outside of baseball, I’m probably one of the least patient persons that you will ever find,” said the blue-eyed, slick-fielding Highland Park High School shortstop. “For instance, I hate standing in lines. Even at Disney World. Love the rides. Hate the waiting.”

Shutan has tried to switch things up a little this season.

“I’m trying to be more aggressive,” admitted the senior, a three-year varsity player for the Giants who ended up with a .386 batting average last year.

In 17 games this spring, the HP leadoff hitter has drawn only seven walks.

In a 2-0 road loss at Maine South on April 12, the left-handed hitting Shutan, who loves to crowd the plate a la Cubs first baseman Anthony Rizzo, led off the game with an 18-pitch at-bat against senior left-hander Joe Gabel.

“I made him work,” said Shutan, with his patented smile. “I just kept fouling off pitches. I’d be early. Then, I’d be late.

“Unfortunately, it didn’t end up in my favor,” added Shutan, who eventually took strike three on a borderline call. “Walking back to the dugout, I had to tip my cap to him. I fought hard. He beat me.”

“The last time I saw an at-bat like that was in 2014, when I was an assistant coach at Libertyville,” said Newburger. “In a game against Lake Forest, we had a guy also named Noah — Noah Greenberg — put together a 20-pitch at-bat.

“This is what we teach at Highland Park,” the coach added. “We want our kids to grind out at-bats. To be tough outs.”

Shutan’s on-base percentage might be down a little, but his quality at-bats continue to be on the rise. Through Monday’s game — a 3-0 victory over Maine East — he’s batting .351 with 19 runs scored. He has struck out only seven times in 57 official at-bats.

He’s a fun player to watch.

Or, Larry and Janet Shutan.

Those are his grandparents — and they’ve got a Cal Ripken Jr. thing going. Along with his dad and mom — Gregg and Devra — they’re always in the stands.

“They never miss one of my games,” Shutan said. “Never.

“They’ve been coming to all of my games [baseball, basketball and soccer] ever since I was eight years old,” he added. “It’s awesome.”

And pretty amazing, considering the Resnicks live in Indiana — one hour, 10 minutes away from Highland Park.

Evidently, they don’t want to miss anything. Watching “Shutan the shortstop” can be very entertaining. He plays the position instinctively and creatively.

Best of all, he can make a sparkling play look routine.

“And we allow him to be creative, since he makes plays that other guys don’t even think about making,” the coach added. “He makes ’em look easy.”

Shutan came up with his usual high-level work in HP’s 7-2 loss to visiting Buffalo Grove on April 21.

In the top of the second inning, he made a backhanded play deep in the hole and then whipped a strike to his trusted second baseman, Noah Spitz, for a force-out.

“We’ve known each other a long time,” said Spitz, who hits No. 2 in HP’s batting order. “When he makes a play deep in the hole, I know that I have to be waiting on second base. I need to get there right away.

“We’ve been playing together since the third grade,” he added. “We’re able communicate without talking.”

In the fourth inning — and with the infield in — Shutan made a “must play” for a shortstop by calmly fielding a grounder and cutting down a BG runner at the plate.

“Having a senior leader like him up the middle gives a coach a real comfortable feeling,” Newburger said.

Having a prototypical leadoff like Shutan also is a luxury for a first-year head coach.

In the fourth inning against BG, Shutan took a 2-2 pitch and sliced it down the left-field line. Then, in textbook fashion, he turned on the burners and slid into second base with a double.

“He’s real quick out of the box,” said Newburger. “He was thinking double all the way.”

“I love hitting the ball to left field,” Shutan said.

His other talent is pitching. Shutan was outstanding in relief on April 20, when he fanned six hitters in three scoreless innings in a 5-4 loss against Glenbrook South.

There’s no way to predict what pitch will come out of Shutan’s hand on any given day.

“We warm up together before games, and he’s throwing 10 different pitches at me,” said Spitz. “Knuckleball. Split change. Sliders. Every day, he adds a little more to his repertoire.”

The fun-loving Shutan readily admits that he’s got a funky side. He can be quirky.

Watch him on the field.

First, just before the pitch is delivered, you see him putting the pocket of his glove up and out like he’s collecting an offering. He then drops it down on the infield dirt.

“I do it the same way every time,” said Shutan.

On occasion, he will “bite” the front neck portion of his No. 2 game jersey or the tip of his glove during pre-pitch setups.

“Just a little habit that I’m trying to break,” Shutan said. “I did the same thing in basketball — and so my coaches [Paul Harris and Ross Deutsch] had me chew gum.”

And there’s this. Shutan, who earned all-league honors for the HP’s boys basketball team this winter, is freakishly ambidextrous.

But he’s got no bias or preference when it comes to eating food.

Shutan, as it stands now, doesn’t plan to play college baseball. He instead will focus on his studies, when he enrolls at Indiana University next fall.

“I can’t imagine my life without playing sports … maybe I will try to walk on,” he said.

That would make two sets of grandparents very happy. 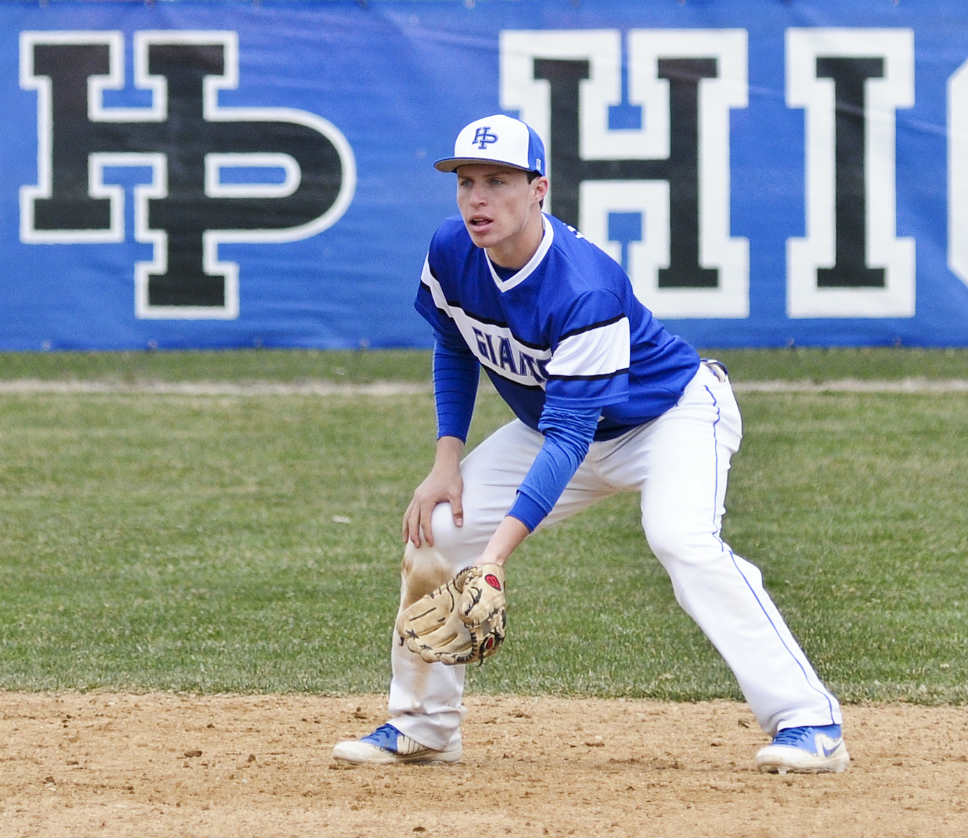 Noah Shutan sets up at shortstop. PHOTOGRAPHY BY GEORGE PFOERTNER 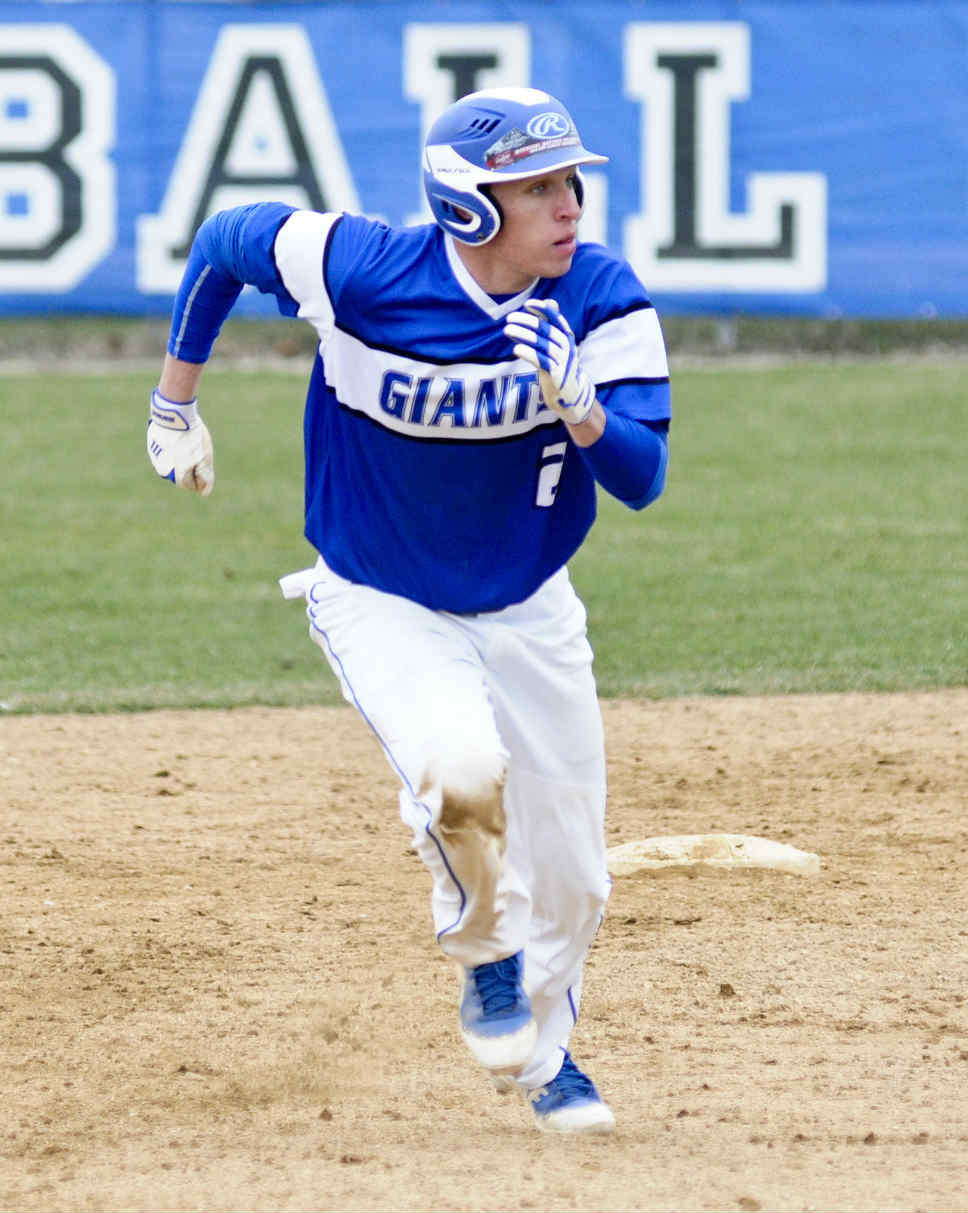 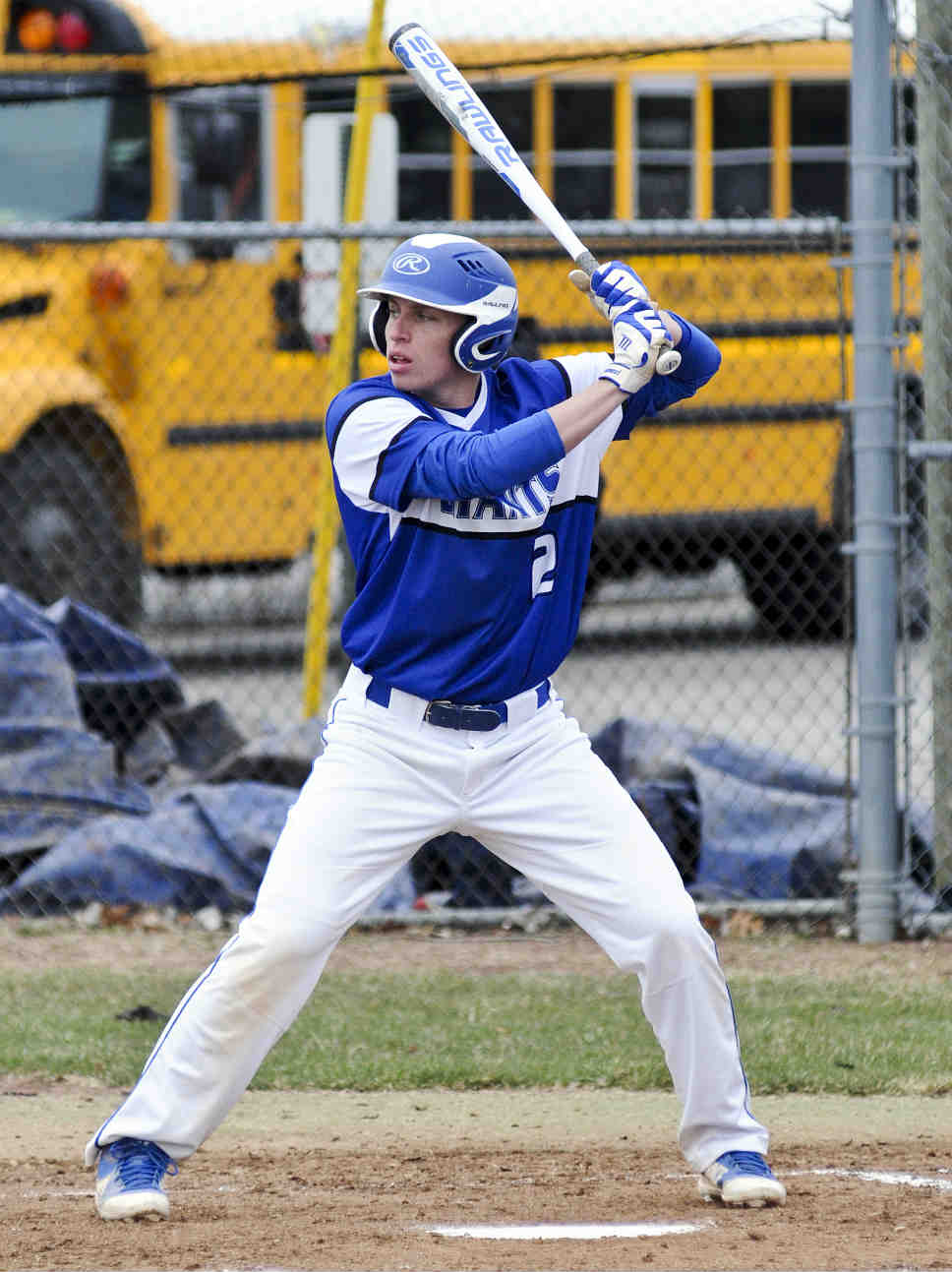