LAKE FOREST — Before casting for the Lake Forest High School musical production of Beauty and the Beast, junior Bryan Kingsley and sophomore Cara Page were strangers to each other.

Now they are co-stars and friends.

Before the curtain comes down on the show, Kingsley will transform from a beast into Belle’s prince, played by Page.

The show opens at 7 p.m. April 26 in the Lake Forest High School auditorium. It showcases the work of 93 students who are either cast members, crew or musicians in the orchestra telling the classic fairy tale. There are also performances at 7 p.m. April 27 and 3:30 p.m. April 28.

Based on the Disney musical version of Beauty and the Beast, the LFHS performance focuses on a cursed prince who is turned into a beast. The curse can only be broken by a loving kiss.

John Wanninger, the co-director and an LFHS English teacher, explained the storyline: Belle becomes a prisoner of the beast, but as the two begin to get to know each other, they recognize beauty is more than skin deep. They eventually kiss, transforming the beast into a prince. The special effect of the transition costuming is a well guarded secret until it is revealed on opening night, Wanninger said.

When the casting was announced, Page kept it simple. She approached Kingsley.

From there Kingsley and Page starting working with each other, building their own characters and each others’ parts.  As they got to know each other better they became more comfortable in what they were doing.

“Before it was us and now we’re one,” said Kingsley. “We work really well together. Before we didn’t know each other and each rehearsal was a growing experience. We’ve really grown together because we’ve helped each other.”

Both Page and Kingsley are thrilled with their roles and how they developed through rehearsals. She said she likes the Belle character because of the play’s message about looking inside a person rather than at the surface.

Kingsley, who has previous acting experience both at the high school and elsewhere, said that when learning the role he needed to both step into the beast’s character but remain himself. He said he drew on his own personality.

“I do a lot of yelling in the show and there is anger with this role,” said Kingsley. “I think about things that make me angry and use that to see myself in the role so it seems natural.” 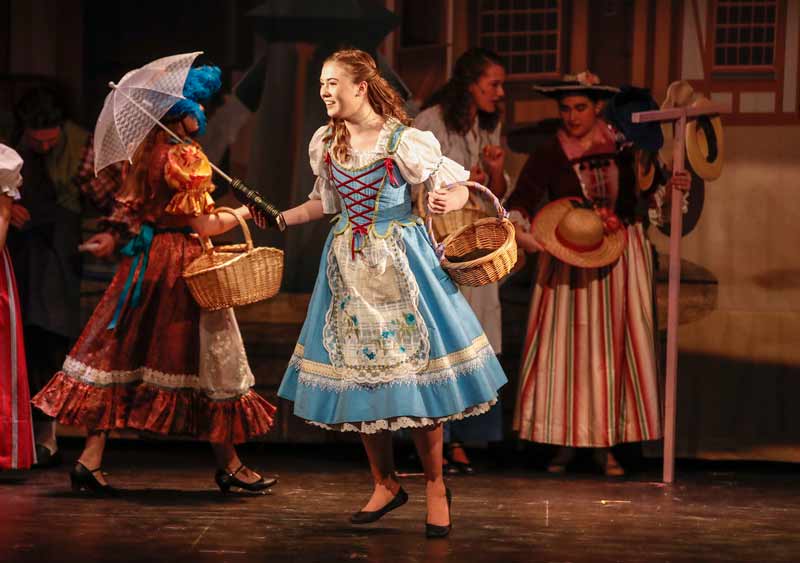 Cara Page’s Belle dances during the opening scene during the dress rehearsal for Beauty and the Beast at Lake forest High School. 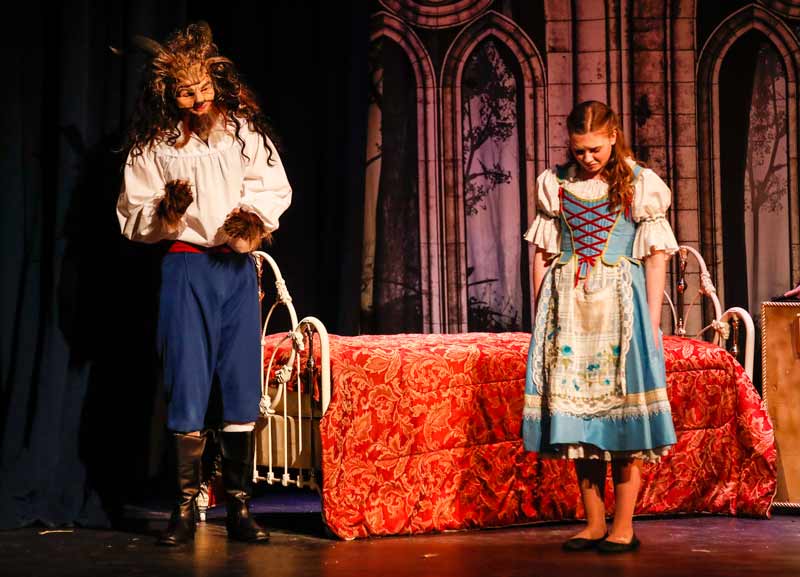 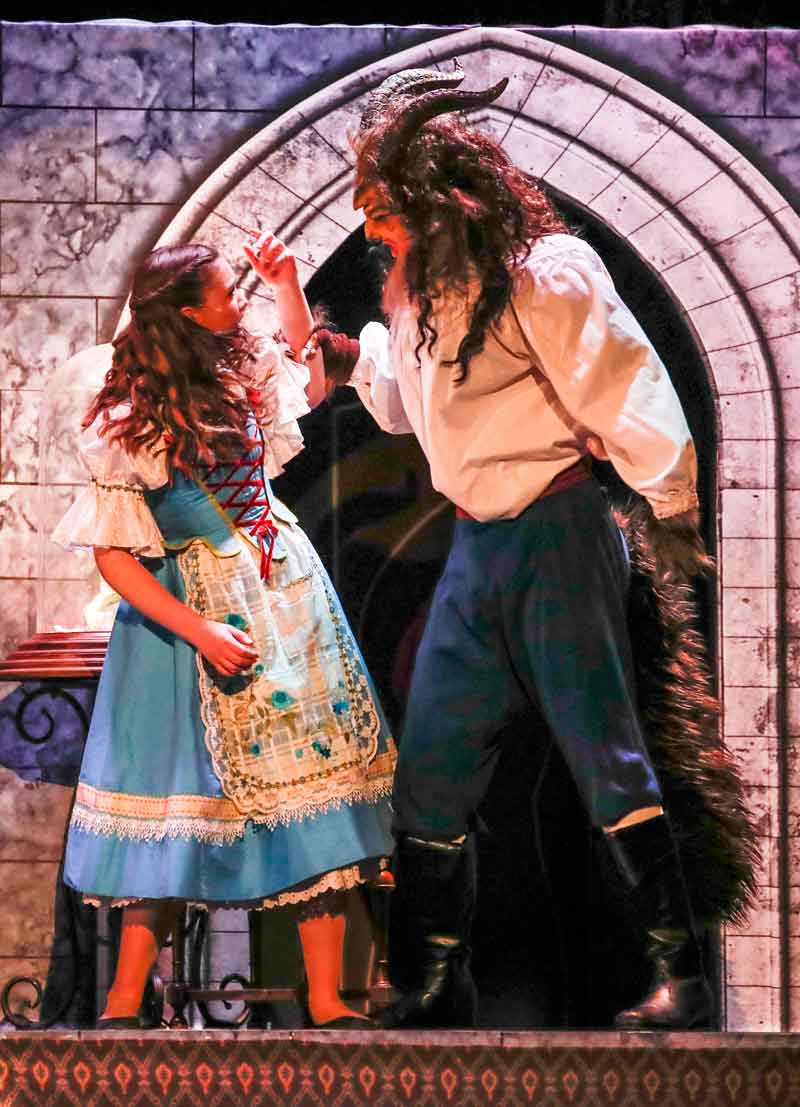 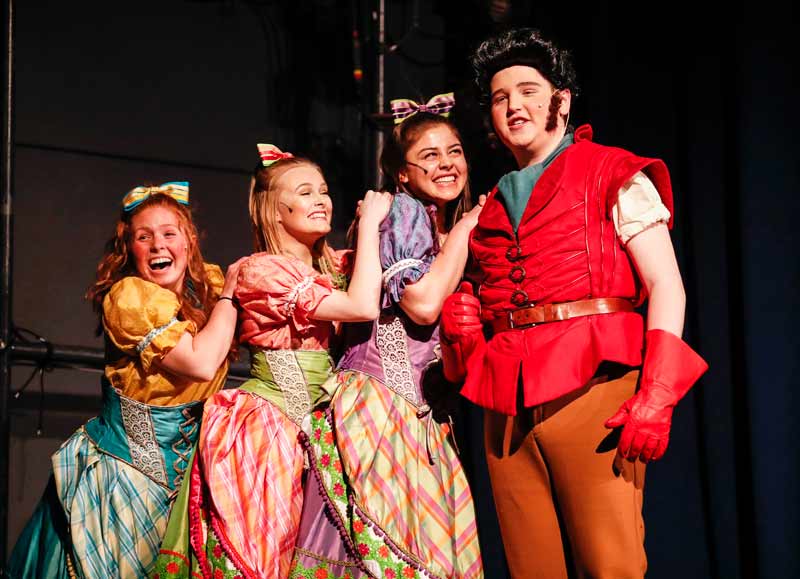 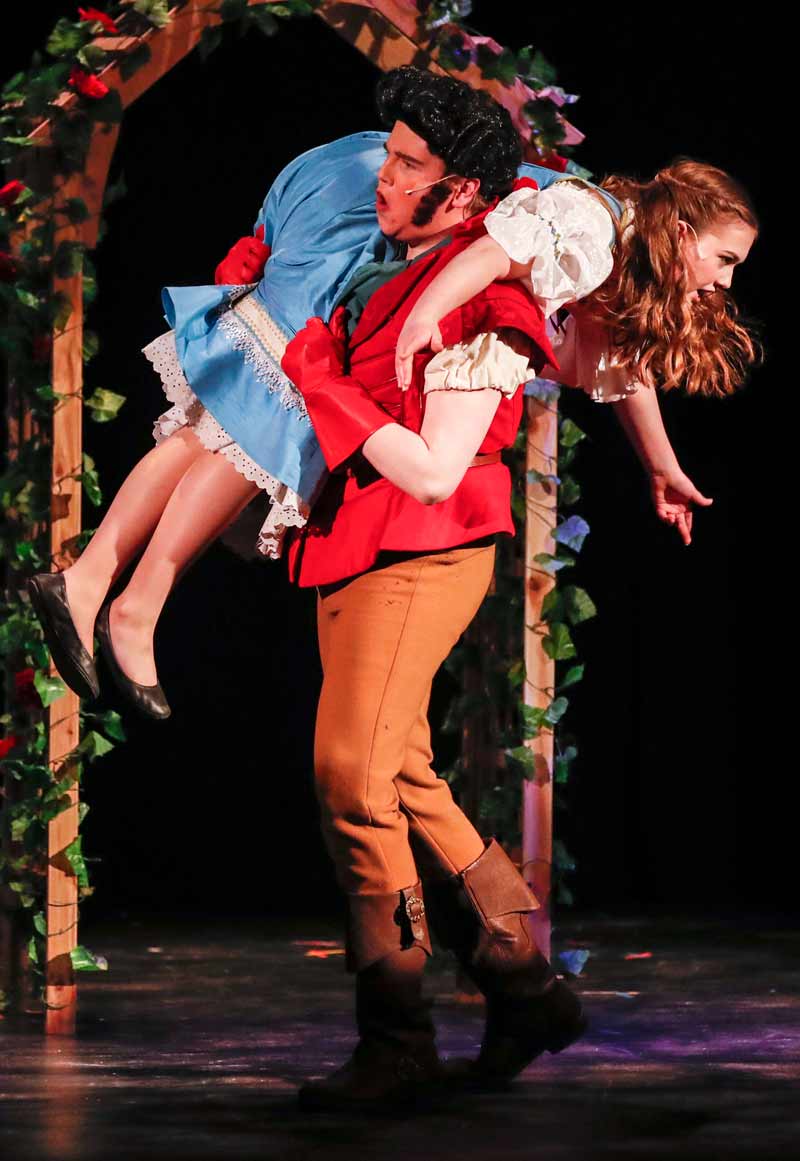 Through the rehearsal process and during the performance, actors like Kingsley and Page need direction. Along with Wanninger and Kelly MacBlane, a history teacher and the other faculty co-director, that comes from Alec Boyd, a sophomore, and Isabelle Andress, a senior. They are the student co-directors.

Both Boyd and Andress have acted before, but this time they wanted a different experience. Boyd said he has been acting since fourth grade. He has performed at the Lookingglass and Citadel Theaters. Directing has been eye opening for him.

“On stage you think you know what you are doing,” said Boyd. “Now I can take a step back, see the small mistakes and help (the actors) fix them. I’ll say try this and they’ll say OK, I’ll try that. It’s going very smoothly.”

Andress said both she and Boyd also have small parts in the show. She said there is one critical rule about their acting. Only one of them can be acting at a time so the other can concentrate on off-stage responsibilities.

Family Entertainment Was the Choice This Year

Beauty and the Beast was selected to offer a contrast from last year’s production of Urinetown, a more contemporary musical that premiered on Broadway in 2001, according to MacBlane.

“Last year we had a dark, more mature comedy,” said MacBlane. “For this year we wanted something lighter, for the family.”

With so many students involved in the different aspects of the production, Wanninger said Beauty and the Beast is a team effort. Along with acting and singing, students build the set. They also handle the sound and light systems.

Boyd said even though he and his schoolmates are doing a fairy tale geared for family entertainment, there is still a message he wants the audience to take with it from the theater. It is important to get to know people beneath the surface.

“This is real life,” said Boyd. “We are able to pull from our experiences.” 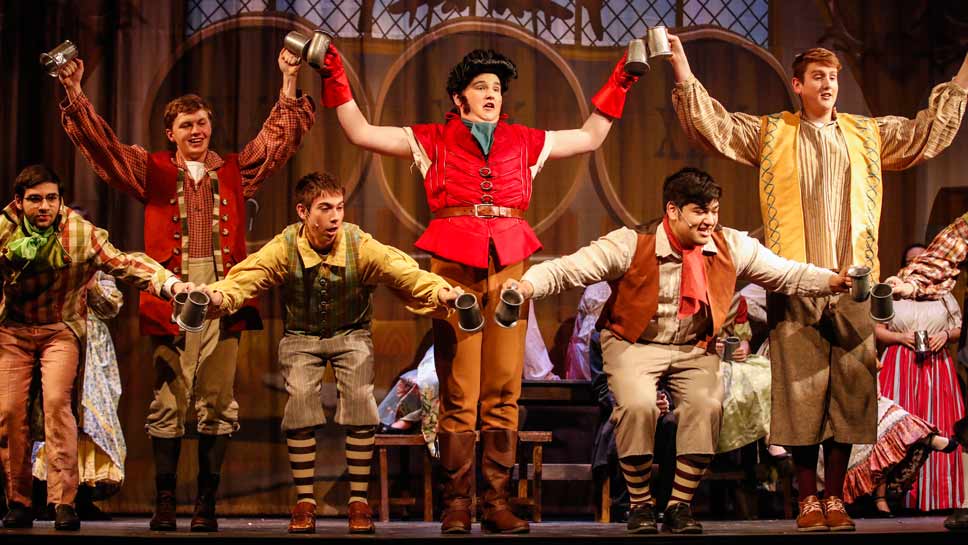 Adam Clayotn’s Gaston during a dance number in the bar during the dress rehearsal for Beauty and the Beast at Lake forest High School. 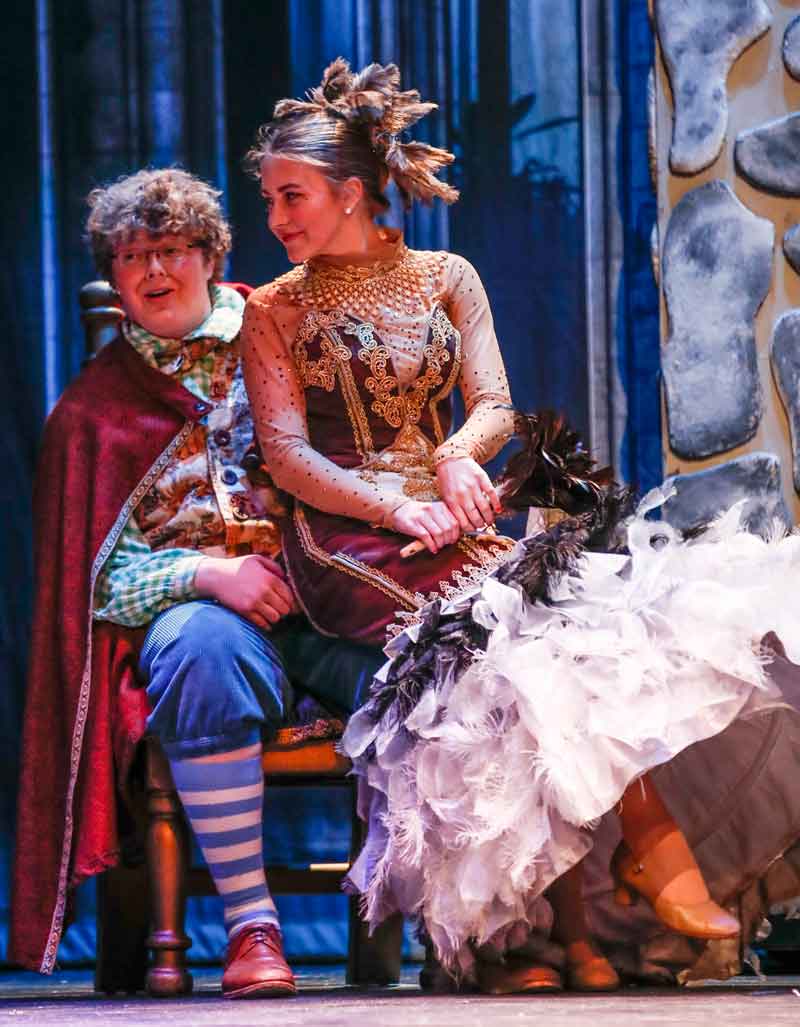 Senior Bradley Berklich as Belle’s dad Maurice has Senior Camille Valentenic’s Babette on his lap during the dress rehearsal for Beauty and the Beast at Lake forest High School. 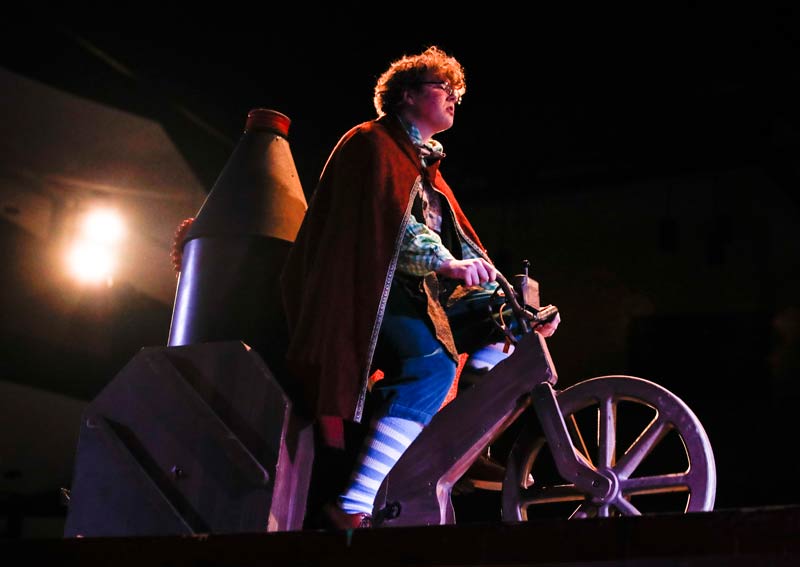 Senior Bradley Berklich as Belle’s dad Maurice rides his invention during the dress rehearsal for Beauty and the Beast at Lake Forest High School. 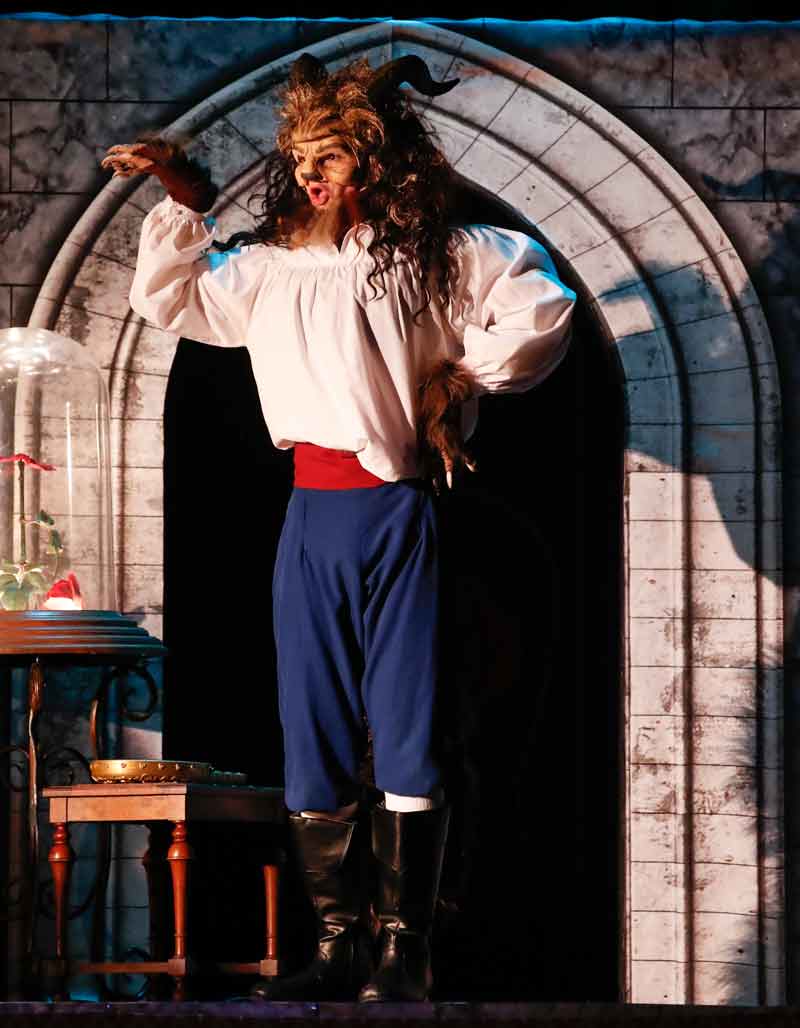 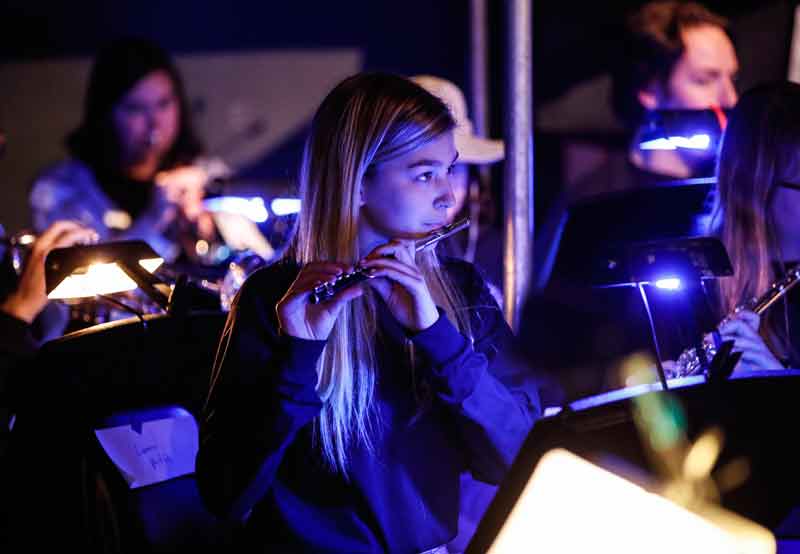 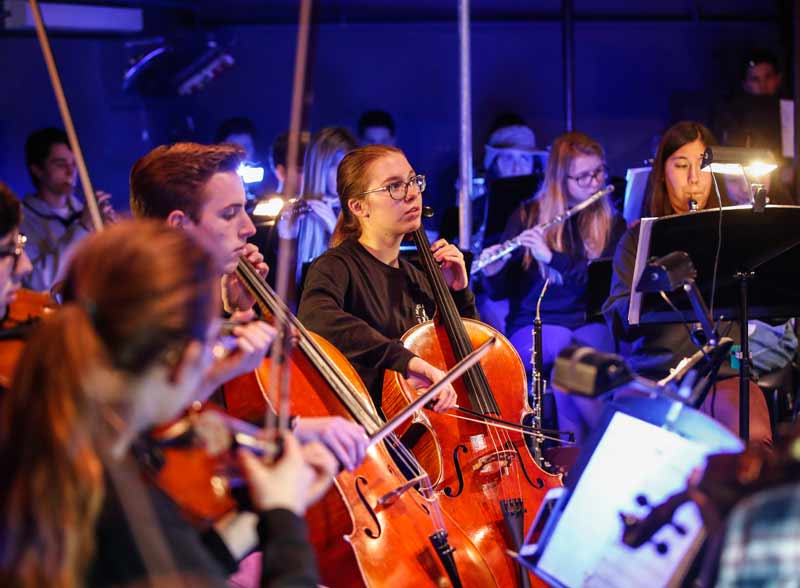 Grace Mockus, center, and Thomas Knipe to her left, practice with the pit orchestra. PHOTOGRAPHY BY JOEL LERNER/JWC MEDIA.