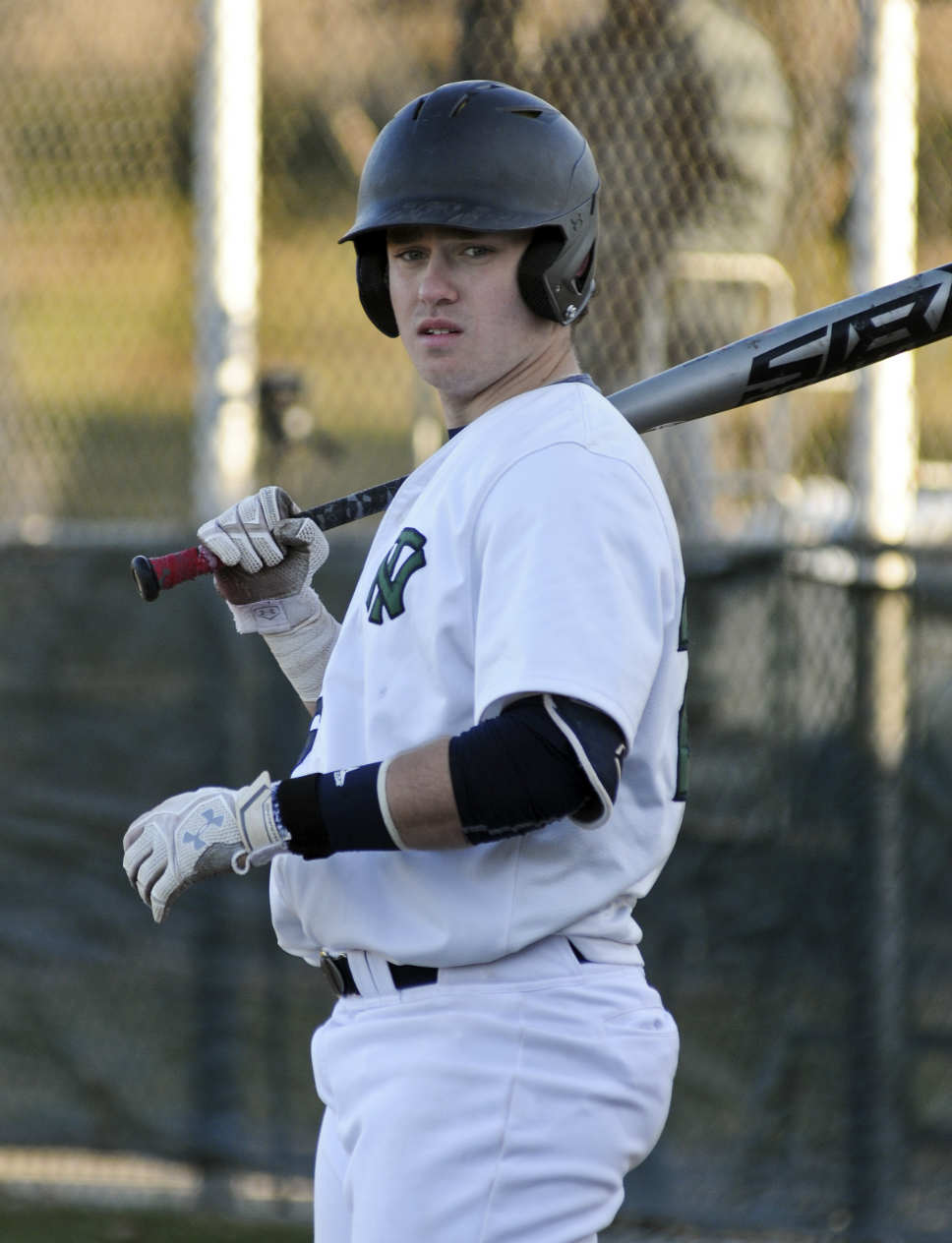 As you might have heard, the “flyball revolution” has broken out in Major League Baseball.

We’re in the age where the home run is the rage. Big swings turn into big contracts.

So you can understand why Cam Redding, who will play Division I baseball at St. Louis University next year, and other players of his ilk would like to get in on the action.

The hard-hitting New Trier catcher, who played his summer club ball with highly touted Top Tier American, admitted that he’s been working on his launch angle. He’s been trying to add a little upward tilt to his swing.

So it was pretty cool and telling, when — in the opening game of the 2018 season — the New Trier senior turned Kerry Wood Cubs Field in Chicago into his own private launch pad.

Josh Batista, who pitches for Lane Tech, hardly knew what hit him, when the New Trier slugger strolled to the plate, went the other way and belted a pair of three-run home runs against him.

“That’s the way to start a season, right?” said Redding, of his six-RBI outing.

He hasn’t been able to keep up that HR pace — he’s still at two — but he continues to be one of the most feared hitters on the North Shore along with teammate Anthony Calarco.

Calarco, who is hitting .424, has banged out five home runs and knocked in 16 runs.

“AC has me right now,” said Redding, of his friendly competition with the sweet-swing Northwestern University-bound first baseman. “His natural swing is hitting the ball high and far, while I’ve always had a more linear bat path.

“He hits it hard,” the assistant added. “And he’s got a great knowledge of the strike zone. He’s one of those guys who can make adjustments within an at-bat.”

Using a wide and slightly open stance, Redding uses great balance and bat speed to spray the ball to all fields.

The kid certainly raked last season for the Trevians, who took fourth in the Class 4A state tournament. As the team’s primary designated hitter, the ball jumped off Redding’s bat — especially during the team’s playoff run.

Hitting fifth in the batting order, Redding ended up leading the team in batting average (.421) for the season.

With that year of experience, his upside is even higher this season.

“Cam just has to go out and do his job,” said New Trier head coach Mike Napoleon. “He doesn’t have to be ‘The Guy’ all of the time. We’ve got others who can step up.”

His value as a catcher is just as high.

After being the back-up receiver to standout Dylan Horvitz, a late-round draft pick of the Chicago White Sox last June, Redding came into the season more than ready to step into the starter’s role.

To his credit, he played the role of good teammate to perfection last spring.

“I was fine with it,” said Redding. “I went into that season knowing who was going to be the starting catcher. The coaches told me to bring a lot of gloves to the game. I caught [once a week] and played some first base, third base and outfield. I was all over the map. It was good for me.”

Son of a former New Trier first baseman (Graham Redding) who went on to play Big Ten baseball at the University of Iowa, the solidly built and technically sound Redding (6-foot-1, 208 pounds), a former hockey player, has the look of a backstop. He’s not the guy you want to run into on a bang-bang play at the plate.

His skills run deep, especially when it comes to framing pitches, blocking the plate and controlling the opposition’s running game.

“For Cam to do that is a byproduct of all of the hard work that he’s put in,” said NT assistant Justin Wells, a former catcher-first baseman with the Trevians who went on to play at Franklin & Marshall College in Lancaster, Pennsylvania.

Catching has been Redding’s passion since the seventh grade.

“Even as a little kid, I liked catching. I want to be where the action is,” Redding said. “I like being involved in every play.

“I love the defensive part of the game,” he added. “Some people overlook that. But I don’t.”

What sealed the deal for him? Attending a catching clinic — as a seventh-grader — at The Strike Zone Baseball Academy in Glenview, which was run by … Justin Wells.

The two have developed a long, lasting relationship.

“He had the skill set in the [seventh grade],” said Wells. “And he’s obviously gone above and beyond. I expect even bigger things from him moving forward.

“What I like about Cam is that his head is always in the game,” Wells added. “He’s always seeking out coaches and asking us questions. He’s willing to do the drills and get better. He’s always looking to improve his game.”

Redding is not afraid to take charge on — and off — the diamond. 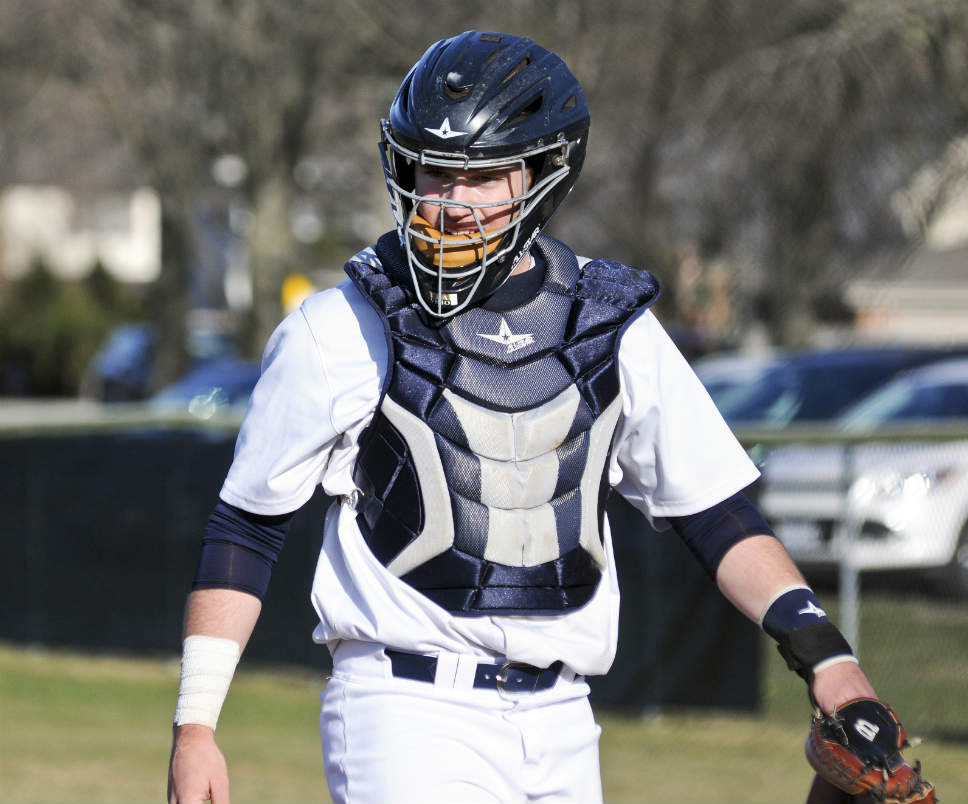