Over the course of his 25-year career as a journalist, sports columnist, author and former ESPN sportscaster, Dave Revsine – the Big Ten Network’s lead studio host – has attended hundreds of live press conferences.

A good reporter, said Revsine, knows how to frame a good question so it’s open ended, rather than closed, leaving room for an interesting – possibly unexpected – answer.

Revsine shared this insider tip along with other tools of the trade when the sports news veteran led a special live press conference for broadcasting students at Glenbrook North – his alma mater – during the school day on April 12.

Over the course of 30 minutes, Revsine answered questions from student reporters on a range of sports-related subjects, just as an athlete, coach or manager would handle a press briefing on game day. As cameras shuttered and video rolled, Revsine responded warmly to students, one-by one, as they asked questions about his career, the future of college sports, and his glory days at GBN.

“Glenbrook North is an unbelievable place,” said Revsine, in response to a question about his high school influences. “To think that as an aspiring sports caster in 1985, I could go and call play by play on the radio and TV for sporting events…that’s just unfathomable. It gave me a leg up.”

Revsine, who graduated Phi Beta Kappa in 1991 from Northwestern University, where he covered Wildcats games for the university’s radio station, WNUR, credits Glenbrook North with shaping his career trajectory, citing high school as the place he learned both success and failure. 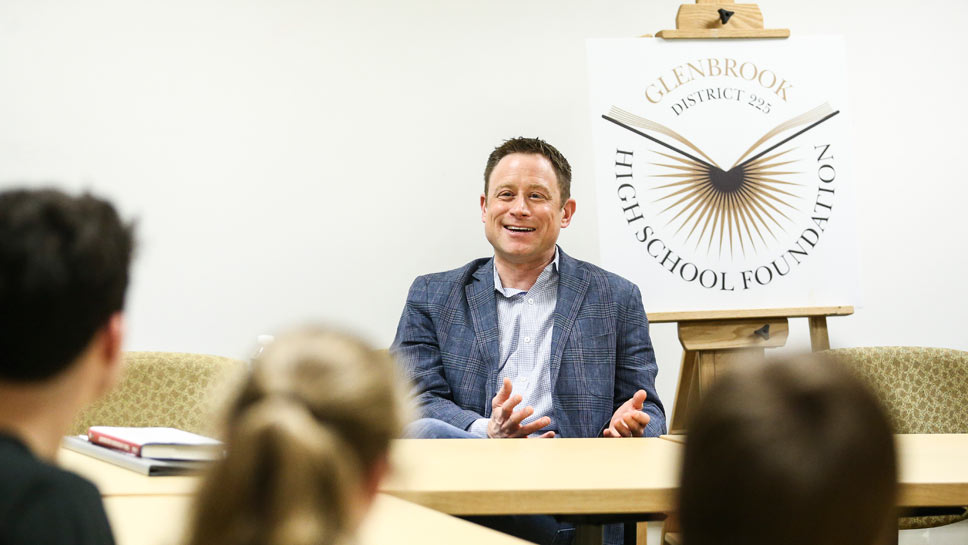 : Big Ten Network host and Glenbrook North High School alum Dave Revsine shared reporting tips with students at a mock press conference on April 12. He will be honored on April 28 at “A Night of Glenbrook Theater,” the annual event hosted by The Glenbrooks Foundation. PHOTOGRAPHY BY JOEL LERNER/JWC MEDIA 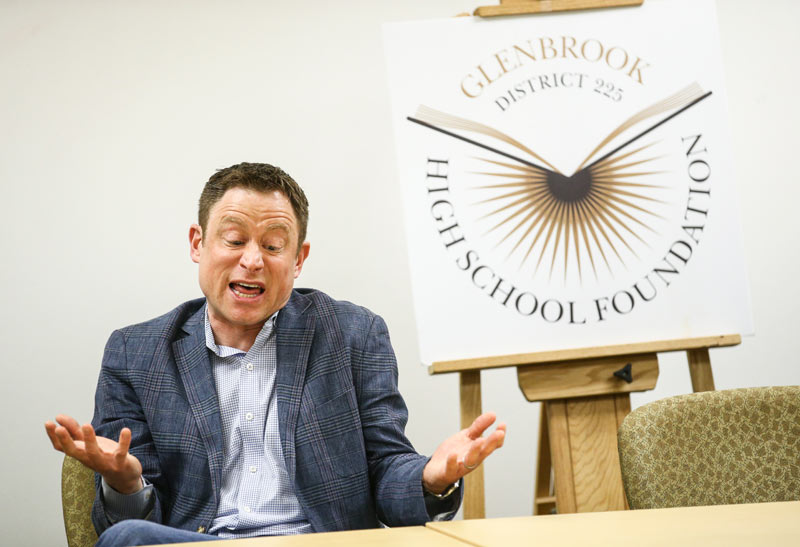 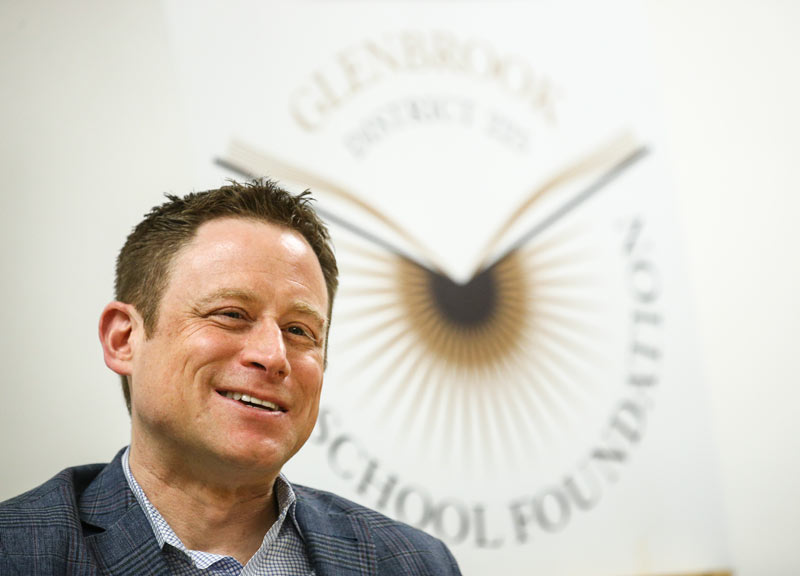 “You get a lot of trial and error in high school,” said Revsine, who lives in Oak Park with his wife and three teenaged daughters. “I was able to apply that later when the stakes were a little bit higher.”

In addition to his work in television, Revsine is also a New York Times best selling author. His first book, entitled The Opening Kickoff: The Tumultuous Birth of a Football Nation, chronicling the formative years of U.S. college football, debuted in 2014 to rave reviews.

“The writing process was arduous,” admitted Revsine. “It involved a lot of solitary time, reading archived newspaper articles and telegrams. It was a huge challenge but incredibly rewarding.”

Revsine spent a decade as ESPN’s SportsCenter anchor, “Outside The Lines” reporter, and voice of ESPN’s Radio College Gameday. After living on the East Coast for many years, Revsine returned to his hometown of Chicago in 2007 to become the face of the newly launched Big Ten Network and lead anchor of “Big Ten Tonight.”

“I was a Chicago booster from afar,” said Revsine. “To be back in the city I grew up in makes me so happy.”

Revsine’s visit to GBN was organized by representatives of The Glenbrooks Foundation, an organization that aims to enhance and enrich educational experiences for all students in District 225. On April 28, Revsine will be the Foundation’s featured honoree and speaker at “A Night of Glenbrook Theater,” featuring a fundraising dinner and student performance of the play “A Little Mermaid.”

In addition to his interest in sports broadcasting, Revsine was active in theater productions during his four years at Glenbrook North, where he says students could pursue their interests freely, without fear of judgment.

“It was no different if you were the captain of the football team, if you wanted to be in speech, drama and debate, or you were a dancer or synchronized swimmer,” said Revsine. “Everyone was supported. “

Revsine got emotional when talking about the late Dr. Emmet Duffy, principal of Glenbrook North from 1969 to 1992. Dr. Duffy passed away in 2005.

“He was just an unbelievable guy,” said Revsine. “He really loved this school and loved the students it created. He supported us in ways you just can’t even imagine. He believed in me even more than I believed in myself.”

Three decades later, Revsine is supporting the next generation of GBN students through his work on behalf of The Glenbrooks Foundation, hoping his wisdom and advice may inspire others.

“Anytime you can have access educational opportunity that wouldn’t otherwise be available, it’s nothing but beneficial,” said Revsine. “This is all about learning.”