KENILWORTH – Many Kenilworth parents and residents attended a Kenilworth School District 38 board meeting on April 16 to show their support of The Joseph Sears School Principal Kendra Wallace in response to recent news that Wallace has submitted a letter of resignation.

While the school board provided no public reason as to why Wallace was resigning from her position as principal, the meeting was held to allow community members an opportunity to air their views on the situation. Scott Wallace, a school board member, acknowledged residents’ concerns regarding stability of leadership at the school. “Too much turn over is not healthy for any organization and we hope that you understand we wholeheartedly appreciate that point,” he said. Kendra Wallace was hired in June 2014 as principal. 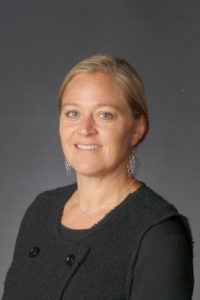 Faculty and staff were notified late in the day on April 11 that Kendra Wallace had submitted her resignation, Chike Erokwu, communication coordinator for the district, told DailyNorthShore. Erokwu noted that it is district policy not to share publicly why an employee is resigning, as a matter of privacy and confidentiality. Scott Wallace touched on this point at the board meeting, noting that the school board is permitted by law to discuss matters in closed session to protect personal privacy.

“In general, disclosure and transparency are guiding lights, except when they conflict with personal privacy,” he said.

But during the public comment period at the April 16 meeting, residents repeatedly asked the district to share that information and for more transparency in the process. Many residents said the surprise resignation was a big topic of conversation over the weekend.

“This has been the talk of all of Kenilworth since Thursday,” Alison Dempsey said.

Many residents also tearfully expressed their love and support of a principal who knows every child by name, and who they say has been a positive change for Joseph Sears.

“I think Kendra Wallace is intelligent, dynamic, articulate and engaged. She is an amazing principal,” Danielle Dold said.

Marjorie Bransfield said Wallace has brought much needed changes to the school, and she said she worried the board would not be able to find an equal replacement. “I promise you on the board there is not a better one coming,” she said.

The school board will meet on April 19 to deliberate whether to accept Wallace’s letter of resignation and potential next steps depending on that decision, Erokwu said.

The meeting will be held on April 19 at 7:30 p.m. at The Joseph Sears School, 541 Abbotsford Road, Kenilworth.