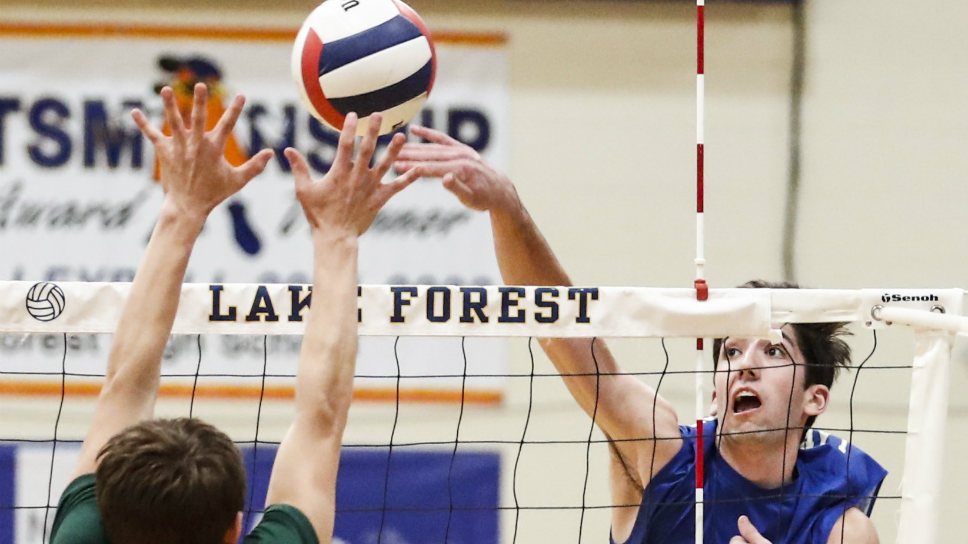 Joe Chamberlain of the Scouts makes a play at the net. PHOTOGRAPHY BY JOEL LERNER

Joe Chamberlain could not finish the big smiley-face cookie at a Lake Forest High School lunchroom table several years ago.

About half of it remained.

The volleyball player, a freshman at the time, didn’t want to spike it into a waste bin. So he looked around at his lunch mates and neighbors, hoping to find a … hungry face.

“He gave the rest of the cookie to me,” recalls Will Gescheidle, another freshman volleyball player three years ago. “Nice guy. And it happened more than once, Joe being unable to eat the entire cookie in one sitting. That’s where I met him, right there at the lunch table.

“We’d hang out together the rest of the year.”

Chamberlain, now a senior and a 6-foot-4, 165-pound outside hitter with a sweet swing, provided Scouts varsity boys volleyball coach Steve Wolf with an entirely different kind of treat last year — his genuine willingness to fill in as a setter (with then-sophomore Kevin Lamp, in a 6-2 system) after starting setter and then-sophomore Justin McCartney (in a 5-1 system) had suffered a broken pelvis at the beginning of the 2017 season.

“Joe,” Wolf says, “never complained about not being able to play his normal position for the rest of the season. That’s the kind of guy he is. Joe did a great job filling in at an important position for us.”

It wasn’t easy, at first.

“I fought through some struggles at the beginning,” admits Chamberlain, who earned a promotion to varsity at the end of his sophomore season and was voted unanimously to serve as captain of the 2018 team. “It’s different, playing the setter position, significantly different. You’re touching the ball on every point, your footwork becomes even more important, and you have to know the speed of your hitters and all of their approaches.”

Chamberlain got the nod to smack sets from his familiar outside spot again this spring. The brother of University of Wisconsin sophomore club volleyball player and former LFHS middle blocker Scott Chamberlain struck 11 kills and an ace in Lake Forest’s tough 27-25, 17-25, 30-28 loss to visiting Stevenson on April 4. The match had a little bit of everything: taut points, dramatic digs, wild momentum swings, clutch kills, match points gained and match points lost.

Chamberlain displayed his finesse and power in the middle of the third set, tapping a dink winner to cut the Patriots’ lead to 17-15 and hammering a traditional kill to knot the North Suburban Conference clash at 18-18. A week and a half later he spearheaded runner-up Lake Forest’s attack with 44 kills at the Lake County Tournament at Lakes and Grant high schools April 13-14.

“He figured out his hitting,” says Gescheidle, a senior libero/defensive specialist who was slated to return from a broken collarbone earlier this month for the Scouts (10-2). “Joe is elevating higher, hitting with more power, passing better, moving better. His game, all-around, has improved.”

Chamberlain — in his third year with Vernon Hills-based Adversity club volleyball — started playing competitive volleyball in the seventh grade. His 18U team qualified for nationals in February; it travels to Phoenix for the tournament this summer.

“My brother [Scott] still has passion for the game,” says Chamberlain, whose younger brother, eighth-grader Mac, also plays volleyball. “Up there in college, Scott sometimes plays three days a week with his club team. He inspired me when he was in high school and played varsity volleyball; he still inspires me. So do my teammates and my dad [Grant]. My dad likes to remind me, ‘Take pride in everything you do.’ ”

His dad majored in finance at UW-Madison. So did his mother, Maureen. Scott’s major at the Big Ten school? Finance.

Joe Chamberlain plans to become the fourth Badger in his family this fall, with an intent to major in business.

“A dedicated, year-round player, as well as a very good student,” Wolf says. “Joe is a solid all-around volleyball player, a team-first guy, a Mr. Steady.”

“He is very intelligent, one of the smartest guys I know,” Gescheidle says of Chamberlain. “And he’s good company. Joe likes to laugh; he laughs at my jokes, and he’d laugh at your jokes.”

Notable: Lake Forest High School junior outside hitter Kevin Lamp pounded a team-high 18 kills and had three aces in the Scouts’ 27-25, 17-25, 30-28 loss to visiting Stevenson on April 4. “An extremely entertaining match,” Scouts coach Steve Wolf said. Scouts senior middle hitter Kyle Waggoner finished with five kills, four blocks and three aces in the North Suburban Conference opener for both teams. Lamp came up big late in the third set, striking a kill to make it 23-23 and finishing two other points with kills to give the Scouts leads of 27-26 and 28-27. A Waggoner block ended the 47th point and the 50th of the final set. … LFHS defeated Waukegan, Antioch and Lakes in straight sets and Zion-Benton in three to earn a spot in the Lake County Tournament final on April 14. The Scouts lost to Stevenson’s Patriots 25-18, 25-17 in the championship match. Waggoner thumped 26 kills (second among teammates to senior outside hitter Joe Chamberlain’s 44) and had seven blocks and seven aces; Lamp finished with 21 kills and five aces; Scouts sophomore right-side hitter Brennan Marzella elevated for 18 kills and seven blocks; senior Jacob Danneker contributed 12 kills and an ace; and junior setter Justin McCartney lofted 106 assists and struck three aces at the two-day tourney held at Grant and Lakes high schools. … LFHS defeated Lake Forest Academy 25-17, 25-18 on April 16. 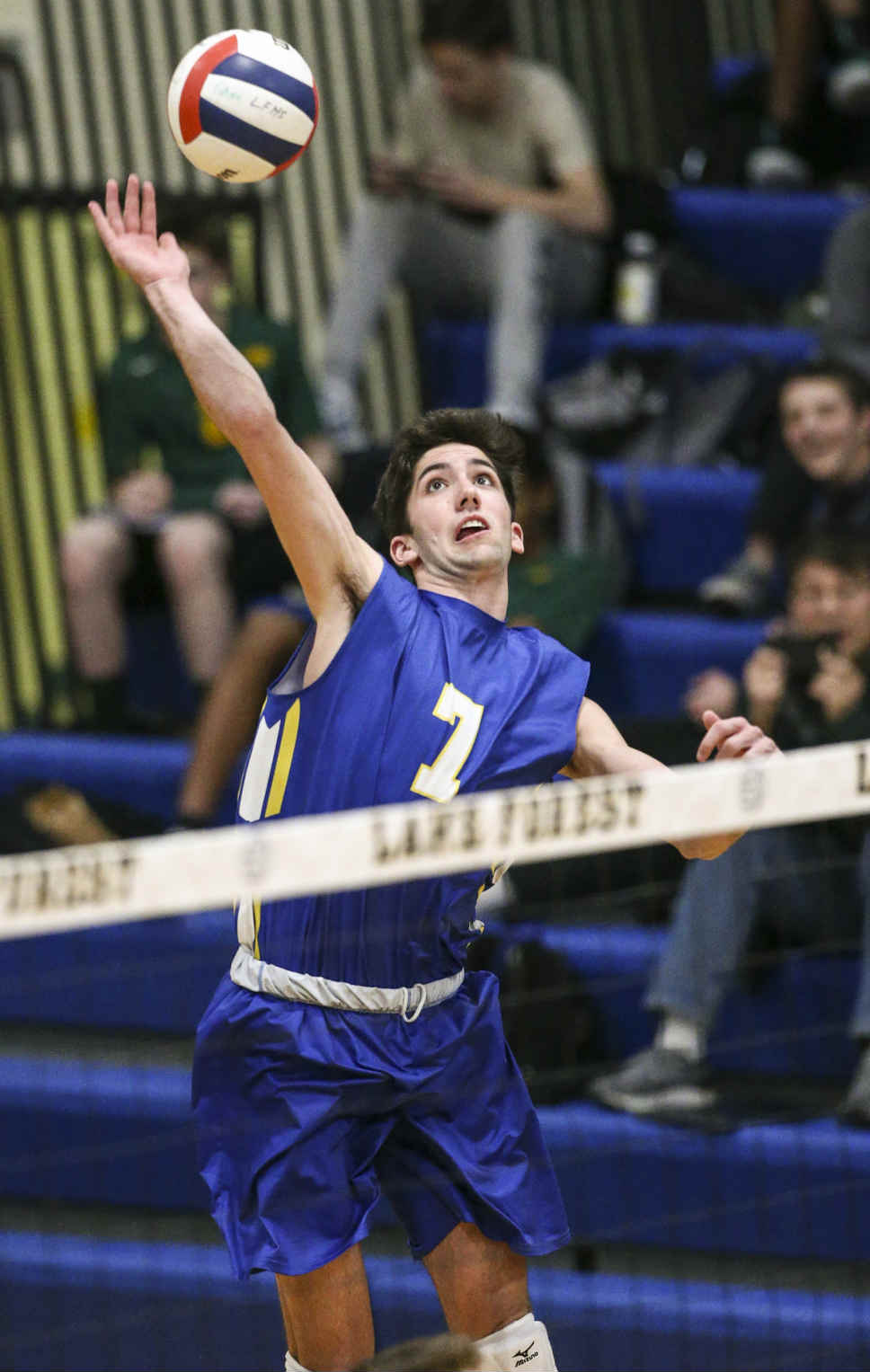 Lake Forest High School’s Joe Chamberlain times his spike during earlier action this spring. The senior had 11 kills in a recent match against Stevenson, while he came up with 44 kills in the Lake Country Invite. PHOTOGRAPHY BY JOEL LERNER 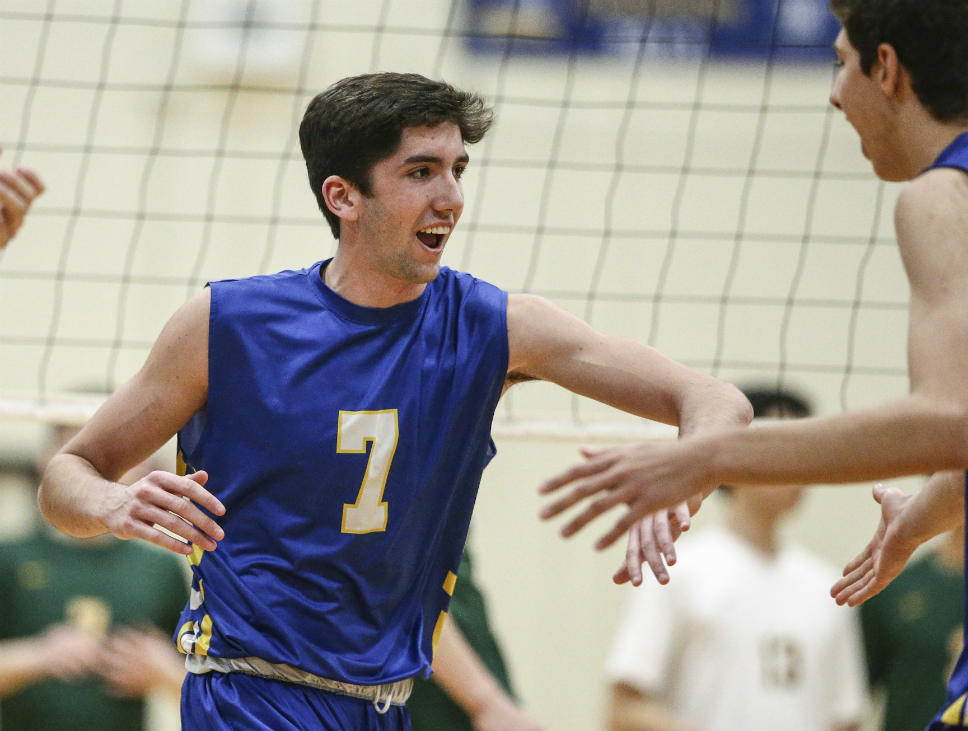