LAKE FOREST — A proposed 158-room Hyatt Place Hotel in the Conway Park corporate office development is on its way to the Lake Forest City Council for approval after its plans received a unanimous recommendation from the Building Review Board March 7.

Catherine Czerniak, the city’s director of community development, said she anticipates the council will vote on the proposal in June. A hotel serving the needs of the businesses in the park near Route 60 and the Tristate Tollway has long been part of the plan for the area.

The developer, the Deerfield-based Janko Group, plans to build the hotel and eventually an office building behind it on the parcel located at 200 Conway Drive. The office building will come later, according to materials filed with the city. 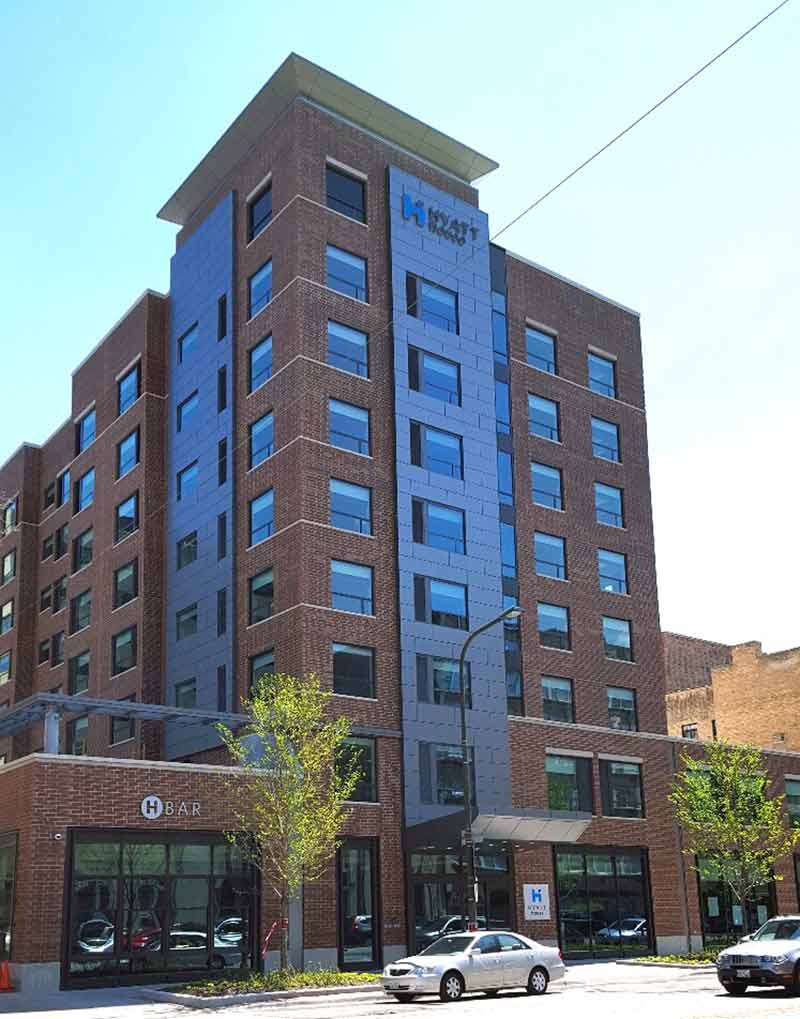 The Janko Group, which plans to build a Hyatt Place Hotel in the Conway Park corporate office park in Lake Forest, developed this Hyatt in Evanston.

“The hotel development responds to the unmet demand for additional lodging in the (I-94) corridor as well as the needs of the corporate tenants in Conway Park,” the developer said in its memorandum to the city.

Hyatt Place is Hyatt’s “upscale business hotel,” according to Janko. The first floor will contain a restaurant, a lounge, meeting rooms and a fitness center with a pool. The next five floors of the six-story building will contain 158 rooms and suites. The rooms have separate sleeping and living areas, according to the Hyatt website.

The idea of hotel development in the Route 60 corridor is nothing new for the city, according to comments made by Czerniak and City Manager Robert Kiely Jr. at a February 5 City Council meeting. Kiely said after that meeting another company is also considering building an inn on Highway 60. Czerniak said as of April 10 no other applications have been filed.

Anticipating potential hotel operators coming to town and seeking financial incentives from the city, the council approved a consulting contract February 5 not to exceed $30,000 with CBRE, Inc., to help protect the confidentiality of all involved.

Czerniak said the purpose of using the outside consultant is to allow the company to evaluate requests from developers for incentives and advise the city. This will protect confidentiality of certain data from being available to competing bidders. It will assure the right questions are asked of the developers as they possibly seek incentives.

“It will assure the hotel developers with full and complete information with that assurance they’ll have that confidentiality,” said Czerniak at the meeting.

“In the world of real estate it’s difficult to create hotels,” said Lansing who is in the commercial real estate business. “We don’t even know what questions to ask until we look under the hood with the developer at their numbers and know if they’re dumbing them down.”

Czerniak said any incentive package, once formulated, will be discussed by aldermen in a public meeting and receive a vote.

CBRE performed similar services for the city during the development of Kelmscott Park, the multiuse residential development at the northwest corner of Laurel and Western Avenues near downtown Lake Forest.