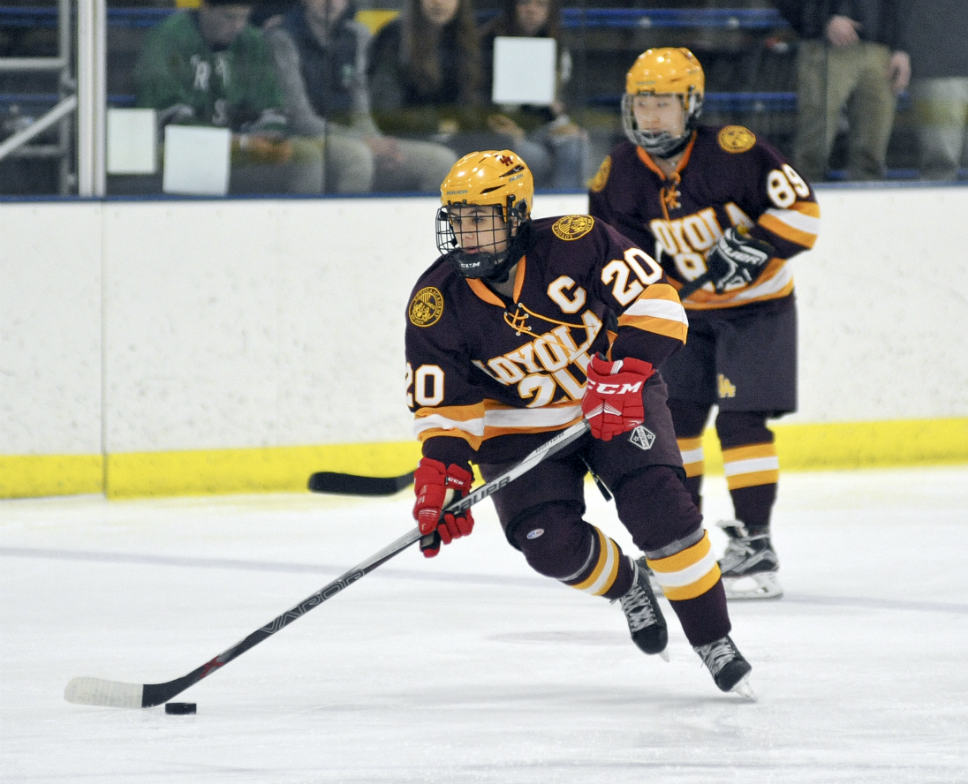 Kaela Finegan, an all-stater for the Loyola Academy girls team, starts a rush during action this past winter. PHOTOGRAPHY BY GEORGE PFOERTNER

For an art assignment a year ago, Kaela Finegan drew five backpack-wearing hikers climbing a mountain. The piece of work hangs on a wall in her room in Glenview.

The Loyola Academy senior hockey player, a four-year varsity defenseman who wore a ‘C’ on her jersey in the 2017-18 season, received an ‘A’ for her artistic effort.

“A mountain … it’s the first thing I thought of when our class was told to create a drawing with a ‘landscape’ theme,” she recalls. “I’ve never been on a hiking trip. But I like the idea of it.”

Finegan and her younger brother, Loyola Academy Gold junior center Aidan Finegan, each reached some impressive heights in hockey circles this year. Kaela found out she had made the Amateur Hockey Association Illinois (AHAI) all-state girls team for the second year in a row last month — on the same day Aidan found out he had made the AHAI all-state boys team for the first time.

The CYA team advanced to the Final Four of the Tier I bracket in Marlborough, Massachusetts, on April 8. Detroit Belle Tire ended CYA’s run with a 4-1 victory.

“Find ice wherever I can and play some more hockey,” Middlebury (Vermont) College-bound Kaela Finegan says of her rink plans between now and her first college class in the fall. (She might continue her competitive hockey career at the liberal arts school.)

Aidan played hockey before Kaela did. He was 5 at the time, maybe 6. Kaela was a figure skater when she watched her little brother skate briskly and move a puck and shoot a puck. She later thought, ‘Now that looks fun.’

“My sister,” the 5-foot-11, 170-pound Aidan says, “made the decision to play hockey on her own. And she’s been supportive of me through the years, always encouraging me to be the best hockey player I can be, as well as the best person I can be.”

Big sis was there, planted in the Loyola Academy student section at UC last month, when her little brother broke a 0-0 tie with perhaps the biggest goal of his young life. The 5-4 Kaela popped out of her seat near the Chicago Blackhawks’ home rink and celebrated enthusiastically with her friends and teammates.

Aidan’s immediate take on his goal?

“I don’t remember much,” admits Aidan, who finished with 24 goals and 28 assists for a 53-10-2 team. “I do know we were on a 2-on-2 rush, with the puck deflecting off a defenseman’s stick. Then the puck, going off my stick … I didn’t think I had scored. I only realized I had scored when I heard my teammates yelling all around me.”

More yelling — cheering, really — ensued at the school in Wilmette the next week. Each state hockey champ donned his LA Gold hockey sweater for a parade around the hallways. The school band performed, competing for attention with the rounds of applause at every corner. The smiling pucksters received countless handshakes and high fives and hugs.

Aidan’s biggest fan had plenty of energy left to exalt her fellow in-house star, who played on Glenview Stars teams (mite) for three years before skating with Falcons teams at the squirt and bantam levels.

“My brother has a really good shot,” says Kaela Finegan, who scored three goals and assisted on 15 others for LA’s squad, with her assist total ranking first among teammates — despite missing more than a handful of LA games because of her CYA commitment.

“Aidan became,” she continues, “a very good playmaker this year, always looking to set up his teammates when the opportunity to score wasn’t there.”

Their dad, Scott Finegan, played lots of pond hockey while growing up in hockey hotbed Minnesota. Their mom, Yvette Finegan, served as team manager of Loyola Academy’s girls hockey squad for the past two seasons.

“My mom was a huge part of our team my junior and senior seasons. Huge,” an appreciative Kaela says. “She didn’t play hockey when she was young, but she loves the sport, has loved it for years.”

Signs of love for hockey in the Finegan house? Head south, in the opposite director of those hikers in Kaela’s drawing, and then look around the basement. If the walls could talk down there, they’d likely shout, Please, Aidan, take a break from hockey and try tennis! Or, better yet, badminton!

Pucks fly off Aidan’s stick in the basement, and the walls, poor things, are defenseless during the intense shooting sessions.

“Holes everywhere,” Kaela says. “The walls are a mess down there.” 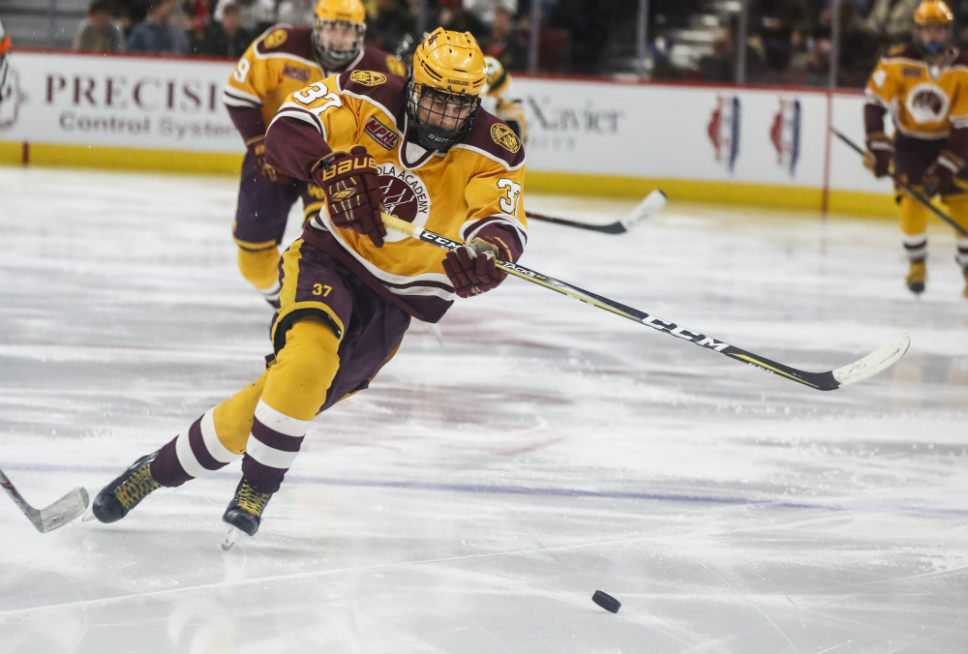