The human skeleton Robert Ritholz had purchased at an antique auction in Chicago did not quite fit in the back seat of his 1977 Rolls-Royce.

There was only one recourse for the Highland Park native on that day in 2001.

“I placed it in the passenger seat and strapped it in with the seat belt,” recalls the 68-year-old, his bushy handlebar mustache hiding his lips under his perpetually twinkling eyes. “I didn’t want it flopping around the car while on my way home. It took me a while to realize that people in other cars on the road might think it to be odd, a man driving alongside a skeleton.

“I received a lot of strange looks, and I’m sure many of the people who saw me driving that day started an interesting conversation at the dinner table later that night.”

The 1968 Highland Park High School graduate owns four other collectible cars, including a 1951 Bentley Mark VI. His other Rolls — a 1953 Silver Dawn Drophead Coupe, one of only five in the world — has amassed 303,000 miles, and he has raced his 1953 Morgan in vintage races at Road America near Elkhart, Wisconsin.

“Old guys racing old cars,” cracks Ritholz, on the board of directors of the Wroxton, England-based Bentley Drivers Club. “It’s the most exciting thing I do. It requires an enormous amount of sustained concentration, and you have to be constantly aware at all times. I love it.” 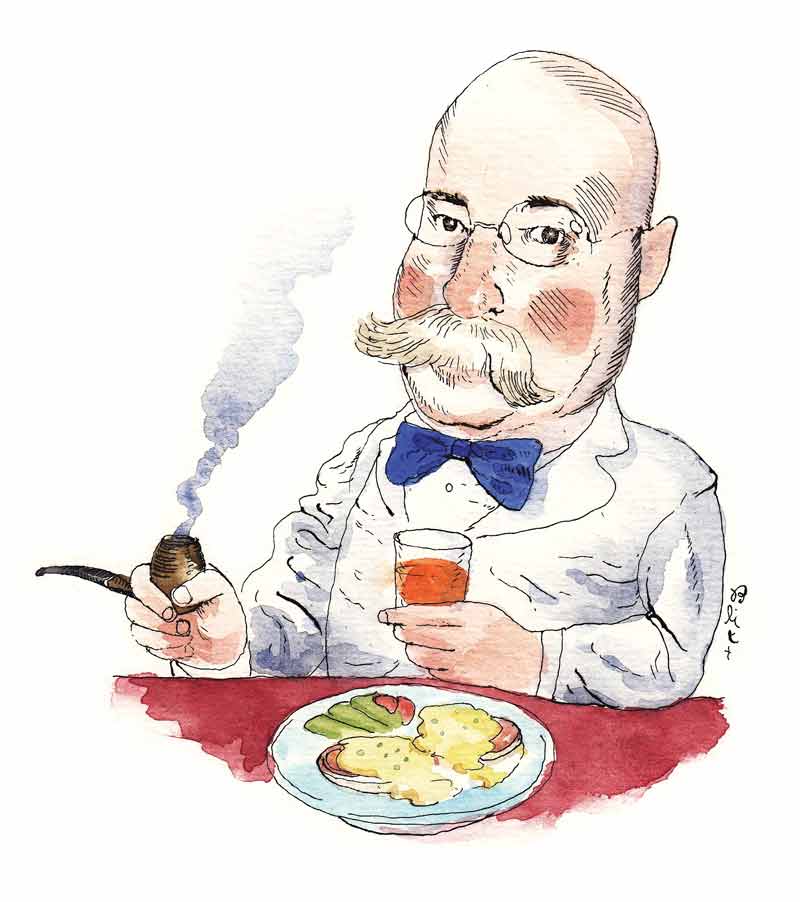 Ritholz recently added a 1967 Trabant, produced in East Germany, to his collection.

His father, the late Donald Ritholz, was driven — as an inventor. In the 1940s he designed one of the first talking dolls ever, one that had a slightly better vocabulary than a newborn’s. It bleated “Mama” at the pull of a string.

Robert’s father later invented one of the earliest forms of contact lenses.

Donald Ritholz eventually sold the patents to both products.

Donald and his wife, the late Vera, liked to ride horses in Lincoln Park, back when Chicago featured bridle paths.

“I was never interested in horses,” says the couple’s only child. “I liked horsepower and anything else that had to do with cars.”

Ritholz has been a serial collector of a vast array of items for decades, beginning with his affinity for toy cars as a tot. Dinky Toys — die-cast miniature vehicles produced in a factory in Liverpool, England — were a big deal to him.

Up in his current guest bedroom, which could easily pass for the most eclectic mini museum in North America, an Asian elephant leg abutting the bed could double as a stool or an end table. Other items in the room include zebra hoof curios, countless military medals and helmets, and the human skeleton that once rode shotgun next to Ritholz.

“I like unusual things,” says Ritholz, whose office/library on the second floor of his house is home to a wooden mummy mask from the 26th Dynasty of Egypt (600 B.C.), a piece of coal from the Titanic, and Spanish galleon musket balls.

Four degrees of Ritholz
Ritholz graduated from Northwestern University with a degree in history and education and earned a pair of master’s degrees in American history and education policy studies at the University of Wisconsin-Madison, where he received a Ph.D. in history of higher education. “I guess I was trained to be a college professor,” says Ritholz, who has never taught a college class but could tell you anything you ever wanted to know about the Republican Party in 1976, when Ritholz served as a 26-year-old volunteer during Ronald Reagan’s campaign for the party’s presidential nomination.

Too short
Robert and his wife, Michelle, got married in the back yard of his parents’ house (now his house) in Highland Park. Sadly, they were husband and wife for only three months and nine days; Michelle died from a cerebral hemorrhage in 1994. “A lot of things attracted me to her, but the one that is probably foremost is that she and I shared a somewhat unorthodox sense of humor.”

Strange garagefellows
Ritholz, on the ’67 Trabant he bought recently: “Probably the worst car made since World War II. However, it is rather cute in an ugly ducking sort of way. Nevertheless, I have been warned not to park it in the same garage as a Rolls or a Bentley because class warfare might break out.”

Sophie’s choice gig
One of Ritholz’s late aunts, Sophie, worked with a neurologist in Austria and later in London. The neurologist died in 1939; Sigmund Freud was 83.

Name game
Answer: Iolanthe and Yeti. Question: What are the names of Ritholz’s cats? Iolanthe is named after the title character of a Gilbert and Sullivan operetta. “Yeti,” the pet owner says, “is large, white and shaggy. His name is Yeti because, well, he looks like a yeti.”

Robert’s rule
“The answer is very simple,” Ritholz says of the key to happiness and a fulfilling life. “But it’s also tricky to execute, i.e. figure out what makes you happy and then do it.”