That broadcast features a performance by one of the North Shore’s most accomplished teenage pianists: 15-year-old Colin Song of Glenview.

Song, a Glenbrook South High School sophomore, and 16-year-old Lauren Kim, a junior at Chicago’s Northside College Preparatory High School, are part of the piano twosome known as Duo Appassionato. The piano virtuosos have garnered praise and recognition for their performances at music festivals and competitions around the United States.

“They have an advanced level of refinement to their playing that’s unusual for performers this age,” said the pair’s teacher, Claire Aebersold Neiweem. “They really know how to listen to each other.”

Song and Kim were two of the seven young artists featured in “From the Top’s” live recording concert on February 25 at the new Smith Center for the Performing Arts in Las Vegas. 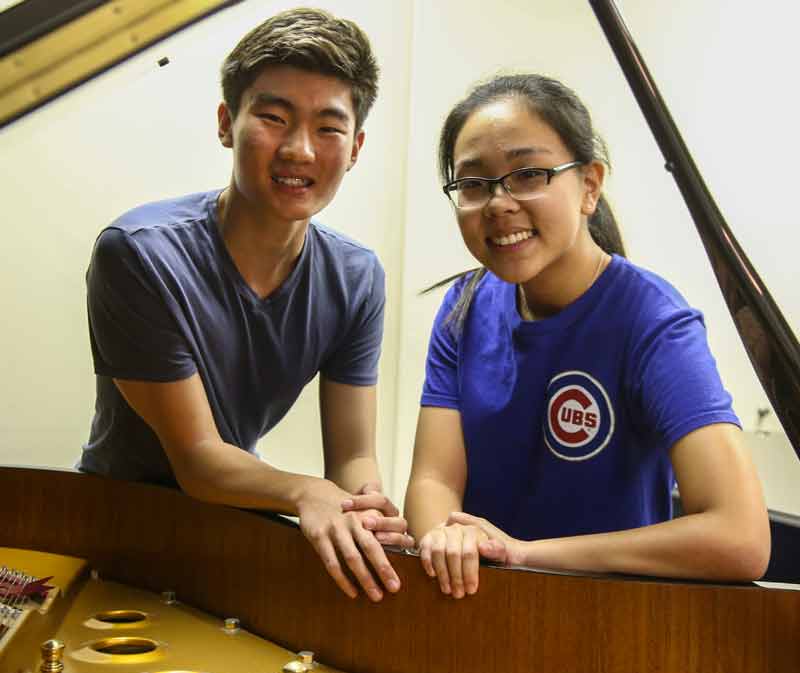 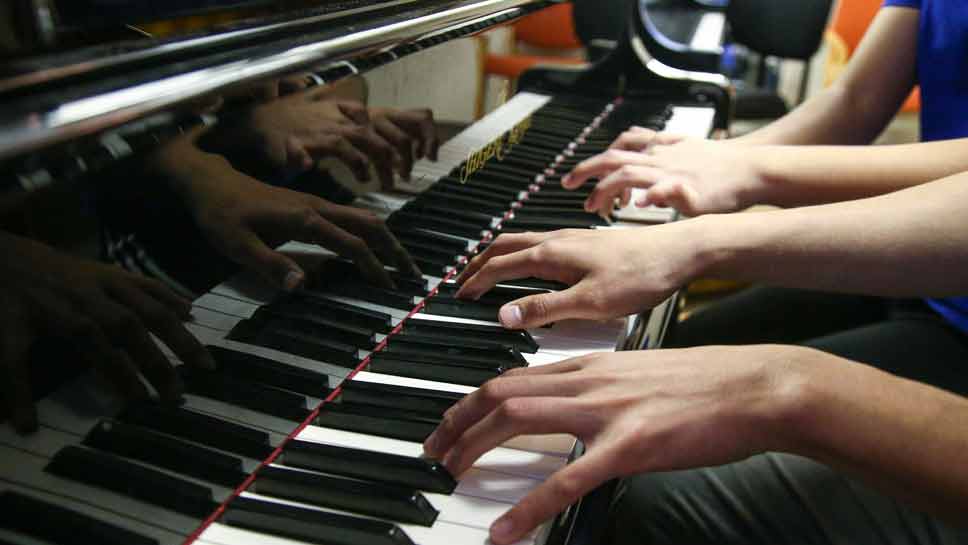 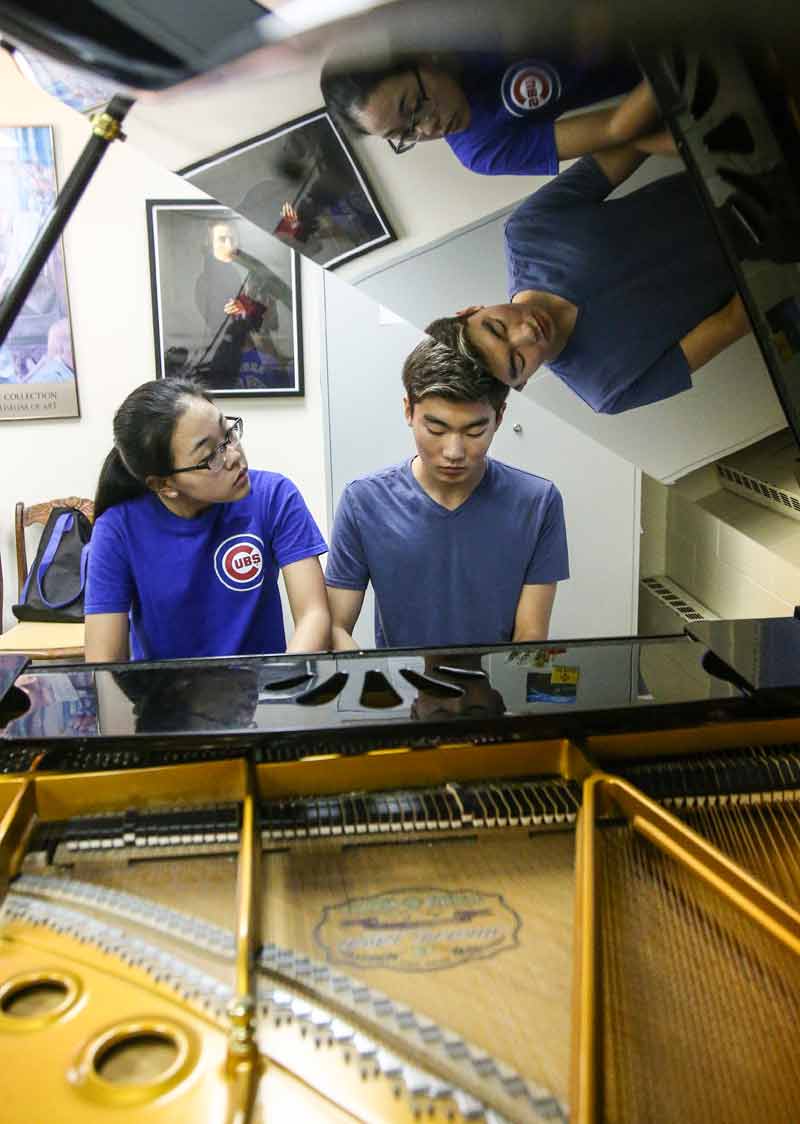 Hosted by the accomplished concert pianist Christopher O’Riley, “From the Top” is NPR’s most popular music program. Since launching in 1998, “From the Top” has built a fan base of 3 million people – airing more than 300 episodes featuring 3,000 young performers. The radio broadcasts are taped in front of a live audience at venues across the nation.

“We had no idea there were 1,800 people in the hall until we finished our piece and the lights came up,” said Song, who began studying piano at age 6.

Both Song and Kim are also accomplished solo pianists. Colin studies privately each Tuesday with instructor Ralph Neiweem at the Music Institute of Chicago’s (MIC) Winnetka campus before joining Lauren down the hall for a duo piano lesson with Claire Aebersold Neiweem, Ralph’s wife.

The Neiweems are founders and artistic directors of the annual Chicago Duo Piano Festival at Nichols Hall in Evanston, now in its 30th year. When Song and Kim met at the festival in 2015, the pair quickly discovered they shared the same technical prowess, artistic style and devotion to their instrument. A musical friendship was born.

“We both find joy in collaboration through music,” said Song. “As a piano soloist, you sometimes find yourself locked up in a room, practicing. Being able to experience music with another person brings a different dimension to playing.”

Last October, at the advice of Kim’s solo piano instructor, MIC’s Elaine Felder, the pianists submitted their Duo Appassionato performance tapes to “From the Top” producers. By late November, the pair had been selected for the Las Vegas concert.

Duo Appasionato performs music for two pianos as well as piano for four hands, and the two regularly alternate who plays the primi versus secondo part.

“They derive an incredible sense of enjoyment in playing together,” said Neiweem. “It just comes through.”

“I’m a super-scheduled person,” said Song, who has two younger sisters. “I set the same time for practice each day and don’t deviate unless something extreme comes up.”

In addition to piano, Song and Kim share a keen interest in medicine and philanthropy. The teens are using their musical gifts to raise money for Lurie Children’s Hospital of Chicago at an upcoming benefit for the hospital’s neurology department.

The pair will also represent the Music Institute of Chicago at the school’s Anniversary Gala this May, where they’ll perform Leonard Bernstein’s “Candide.”

“We haven’t discussed college stuff yet, and it’s unlikely we’ll wind up in the same place, but we’ve promised to see each other during breaks and keep piano part of our lives,” said Song.

At a recent rehearsal, under the watchful eye of Aebersold Neiweem, the pair sat down at the piano to play the scherzo movement of Felix Mendelssohn’s “A Midsummer Night’s Dream.”

Wearing T-shirts and jeans, Song and Kim looked like typical teenagers, hanging out after school, until their hands set the music in motion. Relaxed and smiling, yet totally focused on each other, Song and Kim brought Mendelssohn’s complex composition to life.

“We really like feeling the music,” said Kim. “And it’s so much easier to feel the music when you have someone to play with.”

Editor’s Note: NPR’s “From the Top” is not currently broadcast from Chicago’s public radio station, WBEZ. To live stream or listen via podcast, visit fromthetop.org