When Northwestern University (NU) alumnus Stephen Colbert made his commencement address to the Class of 2011, he said that life itself is an improvisation. “You have no idea what’s going to happen next, and you are mostly just making things up as you go along.”

If that’s how the undergraduate (Class of 1986 with an honorary degree in 2011) who claimed to “weigh about as much as a kitten” during his NU days made it from improviser to television superstar (currently as host of the Late Show on CBS), then his skills at “making things up” are not too shabby.

On the weekend of April 20-21, Colbert once again returns to his alma mater as part of a celebrity-laden fundraiser for NU’s School of Communication. The CommFest weekend extravaganza kicks off April 20 and will include group reunions, master classes, workshops, parties, exhibits and performances by an illustrious list of alumni—culminating with an April 21 fundraiser dubbed “A Starry Night,” which will be emceed by Colbert himself. 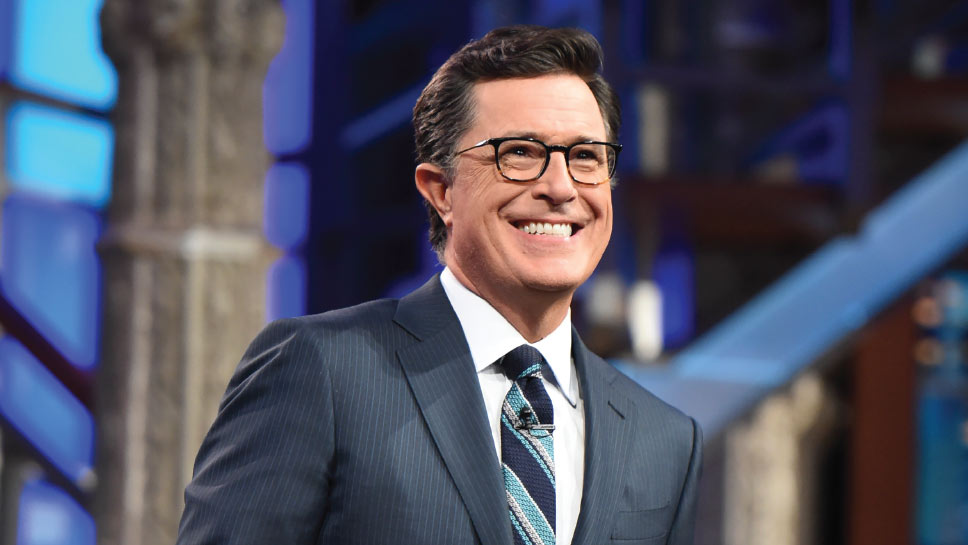 Northwestern alumnus Stephen Colbert headlines a celebrity-studded evening on Saturday, April 21, to benefit the School of Communication. We didn’t get to talk to him directly, but did manage to track down one of his former professors for some entertaining first-hand accounts of what young Colbert was like as a student.

While Colbert is rarely available to sit on the opposite side of the interview chair these days, he has released a few statements via NU’s media relations department about things he learned from Northwestern theater professor Ann Woolworth about how to survive the daily grind. “One of the things that was sort of drilled into me was to get off yourself and just do the work. If it’s difficult, don’t engage in a personal pity party—just continue to do the work.”

Nice quote, but much like the inquiring Colbert himself (in any of his myriad TV personalities from The Colbert Report to his appearances as a correspondent on The Daily Show with Jon Stewart), we were not going to be content to leave it at just that. With some help from NU, we tracked down Paul Edwards, Colbert’s performance studies professor back in the 1980s and quite witty in his own right. Here’s what he had to say:

I understand that Stephen transferred in as a junior and finished the three-year theater program in two years, doing both improvisation and stage performances. What do you remember most about him as a student? (He says he weighed about as much as a kitten.)

He took one class from me, as memory serves, back in maybe the winter of 1985. I’d been teaching at NU for only a couple of years, and hadn’t yet figured out how to effectively run a class. There is no manual for “teaching well.” Northwestern tends to throw its junior faculty into the deep end of the pool and shout, “Start swimming!” Back then, I was still reading lectures from typescripts, and so forth—fatal mistakes, very boring. Colbert seemed bored by the class. My initial impressions of Stephen Colbert? First, absolutely brilliant—the satiric wit and verbal facility you hear on television every weeknight, very much in place back then. But second, he seemed like somebody in a great hurry, who had no patience for a retread of the kind of class he had to take in high school, and then again during his first two years at a different college. He wanted classroom experiences that gave him greater space to find his own voice. This made him very different from a lot of Northwestern students—some of them extremely bright—who just look at the instructor as “cruise director” and sign up for the pre-programmed voyage. Only later, as I read interviews in which Colbert discussed the childhood trauma of losing family members, did I begin to wonder whether his tremendous drive and sense of urgency were related in some way to that. But I’ll restrain myself from playing armchair psychologist.

How do you think his Northwestern training helped him become the media personality he is today?

I don’t think that Northwestern faculty members in theater and performance taught Colbert anything that he didn’t instinctively already know. He credits acting teacher Ann Woodworth, for example, with a very rigorous style of physical training. But in terms of the very precise, language-driven satire and subversive interview tactics that he’s become famous for, no—nobody here. Nobody, I promise you—back then or since—has been teaching classes in “Becoming a Famous High-Visibility Talk-Show Host.” I suspect that he learned more about what he does now from working with the late Del Close (whom, toward the end of his life, I knew somewhat better than I knew Colbert) than he did from taking classes at Northwestern. But a kind of funny story. A playwriting teacher who left here decades ago, Linda Walsh Jenkins, used to organize trips to Stateville Prison in Joliet, Illinois. I went, for example, to see a cast of prisoners—the Stateville “Con Artistes” (I’m not making this up)—perform Charles Fuller’s A Soldier’s Play—which was, without question, the most powerful performance of that play I’ve ever seen. So, Colbert and I are standing in the visitors’ parking lot of Stateville Prison, on a morning sometime in the spring or early summer of 1986. We’re about to be taken inside to watch the North American “Geese Theater” do a workshop with about 150 lifers, about 10 armed cops, and about 15 of us: instructors and students at a major American university, who have come to see their friends (recent NU graduates) try very hard to “improvise” therapeutic performance with people doing hard time. (The event we witnessed that day, I’m sorry to say, was not very impressive. It was a little like Up with People meets The Wire.) Out in the parking lot, Colbert and I began to talk about why on earth each of us was standing there at all. We wanted to support our friends, of course. But we also wanted to diagnose whether “arts education” in prison, as practiced by idealistic recent college graduates, actually did any good in improving the quality of life on the planet. (Since that time, through working with other leaders of “arts in prison” workshops, I have come to feel that it truly does help to raise the level of human decency on the planet—but that’s another story.) My takeaway from this encounter: I believe that Colbert, as far as 30-some years ago, was already trying to figure out how live performance (not movies or TV, but face-to-face engagement) can change things. How comedy, and the sense of both playful inquiry and social criticism that it inspires, can influence human behavior and human ethics. How can comedy, performed before a live audience (even in a TV studio), help us cultivate a truly critical and progressive attitude? How does art-making provide a safe space for rehearsing the re-making of that “better world” we all say we want? Clearly, Colbert is still hard at work on this problem—on a very visible stage before a live audience, but a stage that reaches out into the digital public sphere.

He studied both improvisation and theater. What do most people not understand about the difference between those two, and how did the combination make him so apt at doing what he does with his opening monologues?

The NU Theatre students who excel in stand-up, sketch comedy, and improv (especially long-form) are reliably among the very smartest people who roll through this place year after year. Not necessarily the “most learned” or “best read,” but the smartest—the very quickest. Add to which, they seem to have amazing memories for detail, and predatory talents for lethal mimicry. And that’s a combo platter of rare gifts. To borrow the title of Jeffrey Sweet’s oral history of The Second City: to do comedy you need to be able to bring “something wonderful right away.” Like brilliant jazz improvisers, comics need to be really listening—and really responding. They need to be quick enough to pick up on anything happening in front of them, and make something out of it. Sometimes it works better than others. But the audience picks up right away on the bad smell, whenever a comic falls back on something pre-scripted or pre-written, instead of responding brilliantly to what’s happening “right now,” “right away.” Colbert and Seth Meyers are famous for doing monologues, which they work on with teams of writers. But think for a moment about how quickly those monologues get composed. Sometimes it is impossibly quickly, and must be delivered responsively—to the news of the last minute, right before they tape, as well as the mood of the audience there in the room with them. I’m in awe of this gift of quick turn-around—especially when people apply it to meaningful political and social critique, as both Colbert and Meyers do. But they didn’t learn this from teachers at Northwestern. It was more about being a part of a (and performing in) a creative and competitive community, than it was about sitting around in this or that classroom.

Stephen Colbert is not the only celebrity who will be in town for Northwestern University’s “once-in-a-generation” celebration of the alumni contributions in the worlds of comedy, musical theater, dramatic acting, direction, production, and writing. CommFest 2018, organized by Barbara O’Keefe, dean of the School of Communication, will run Friday, April 20 through Saturday, April 21, with a variety of events and programming throughout the weekend. O’Keefe says the blockbuster lineup and fundraiser was inspired by a similar 1980 event (for what is now the Virginia Wadsworth Wirtz Center for the Performing Arts) which brought stars like Charlton Heston and Ann-Margret back to campus. Here is who O’Keefe and her team have on the CommFest 2018 guest list, so far:

Tickets range from $100 for students to $1,500, including seating for “A Starry Night.” For a full roster of events and information, visit commfest.northwestern.edu/festivities/.