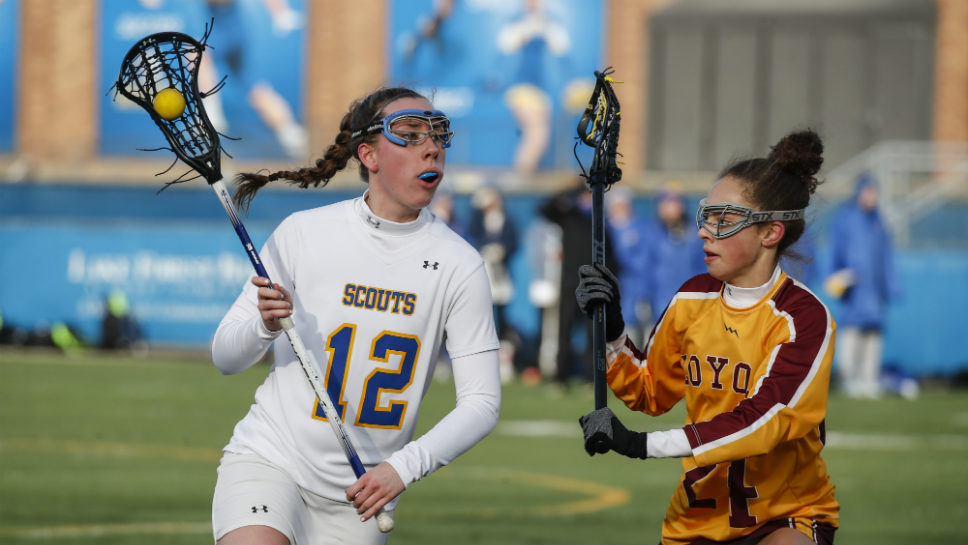 Lake Forest High School girls basketball coach Kyle Wilhelm has some super news to share with one of his seniors, captain Audrey Kaus.

It’s after the regular season this past winter, inside the school, and the information stuns the 5-foot-10 forward and defensive whiz.

“What?” a wide-eyed Kaus reacts, probably wondering if her coach had forgotten April Fool’s Day was a good month away. “I made what?”

Kaus had made the all-North Suburban Conference girls basketball team in the 2017-18 season. No kidding, no foolin’. Players with high scoring and rebounding averages usually earn spots on such a team every year.

Kaus’ averages? Modest, or well shy of the jump-off-the-page figures — 20-plus points, 10-plus rebounds — typically associated with heroines on the hardwood. But Kaus’ numbers came nowhere close to accurately reflecting her worth to the team.

“Most of her statistics [nearly two points, five rebounds and two assists per game] were misleading,” Wilhelm says of the Lake Bluff resident. “She added value to our team with her defense, with her competitiveness, with her intensity, with her passion. Audrey’s eyes lit up whenever I told her she had to guard the other team’s best player; she loved that challenge, looked forward to doing all she could to hold a 16-points-per-game player to maybe two points.

“Coaches from other schools and anybody else who watched us play,” the coach adds, “understood how valuable she was on every possession, especially on the defensive end of the floor.”

Wilhelm had also floored Kaus at the beginning of her sophomore season, when he named her a co-captain on a senior-less varsity squad.

“I remember thinking, ‘Whoa,’ ” says Kaus, who will have earned eight varsity letters (four in basketball and four in lacrosse) when she graduates this spring and turns her attention to battling for the University of Chicago’s inaugural women’s lacrosse team next spring. “He had trusted me to be a leader, and I didn’t take that lightly. I ended up getting injured and missing most of the season, but I stayed involved, encouraged my teammates, took care of the water bottles and helped my teammates learn the plays.”

The injury, a stress fracture in her left knee, sidelined her for the Scouts’ entire 2016 lacrosse season. Not being able to suit up and compete with her teammates in her major sport devastated Kaus at first. Negativity threatened to trip her up and keep her down before she blanketed it with an upbeat approach.

“That was a turning point — how I eventually responded to the my injury,” says Kaus, an honorable mention all-state middie in lacrosse last spring and the Scouts’ leading goal scorer (5) after five games this spring. “It made me take a step back and realize sports aren’t just about wins and losses and what you see next to a player’s name on a stats sheet. The injury forced me to be more positive and made me focus on using leadership to help my teams succeed. How you lead teammates, I found out, varies; you lead with a teammate’s personality in mind.”

Kaus’ lacrosse coach, Cat Catanzaro, made time to watch her valuable middie play much-better-than-middling defense during the 2017-18 hoops season. The tenacity she witnessed, plus the relentless determination, plus the intelligence, plus Kaus’ steals that often led to buckets at the other end of the floor — none of it surprised her.

“To play defense well, you need heart and guts,” Catanzaro says. “Audrey has a lot of both. She is one of the hardest working athletes I’ve coached. Her speed with the ball in lacrosse is another one of her strengths, right up there with her quickness, decision-making, poise and vision. She takes risks, which is always fine with me, because they’re usually calculated ones.”

Kaus’ math abilities come in handy when she tutors young students at Gorton Community Center in Lake Forest. The daughter of a former three-year Carmel High School varsity basketball player (Wendy) and a former high school swimmer/football player (Kansas native Jayson), Kaus figured one of her tutees could use a visual to fully grasp a numerical concept one day.

The defensive standout got downright offensive, looking around the room and grabbing some building blocks to help enlighten her young charge.

“Kids learn differently,” says Kaus, who is thinking of pursuing a degree in business management.

Kaus was a difference-maker for the Scouts’ Class 4A girls basketball regional championship squad in 2017. Lake Forest HS and Warren Township HS combined for only 59 points in the game, with the Scouts edging the Blue Devils 31-28 for Wilhelm’s first regional title and the program’s first since 2005.

“Pure joy is what I remember most about that night,” Wilhelm says. “Audrey certainly showed that. I saw that huge smile across her face, along with the rest of her happy teammates, and thought, ‘This is why I coach.’

“My only hesitation in naming her a captain in her sophomore year was her age. But, looking back, it couldn’t have been a better choice. Audrey learned right away how to motivate others. Her words helped us. Her actions helped us. She’ll leave a massive void.”

Notable: Lake Forest High School owned a 3-2 record in girls lacrosse through April 6. Caroline Skinner ranked second among teammates in goals (4, behind Audrey Kaus’ 5) and first in assists (6). Kristen Larson also had scored four goals, ahead of Ginger Leonardi (3, to go with a pair of assists) and Olivia Douglass (3). Scouts Mary Doheny (2-1) and Grace Kellie (1-1) had split the goalkeeper duties. 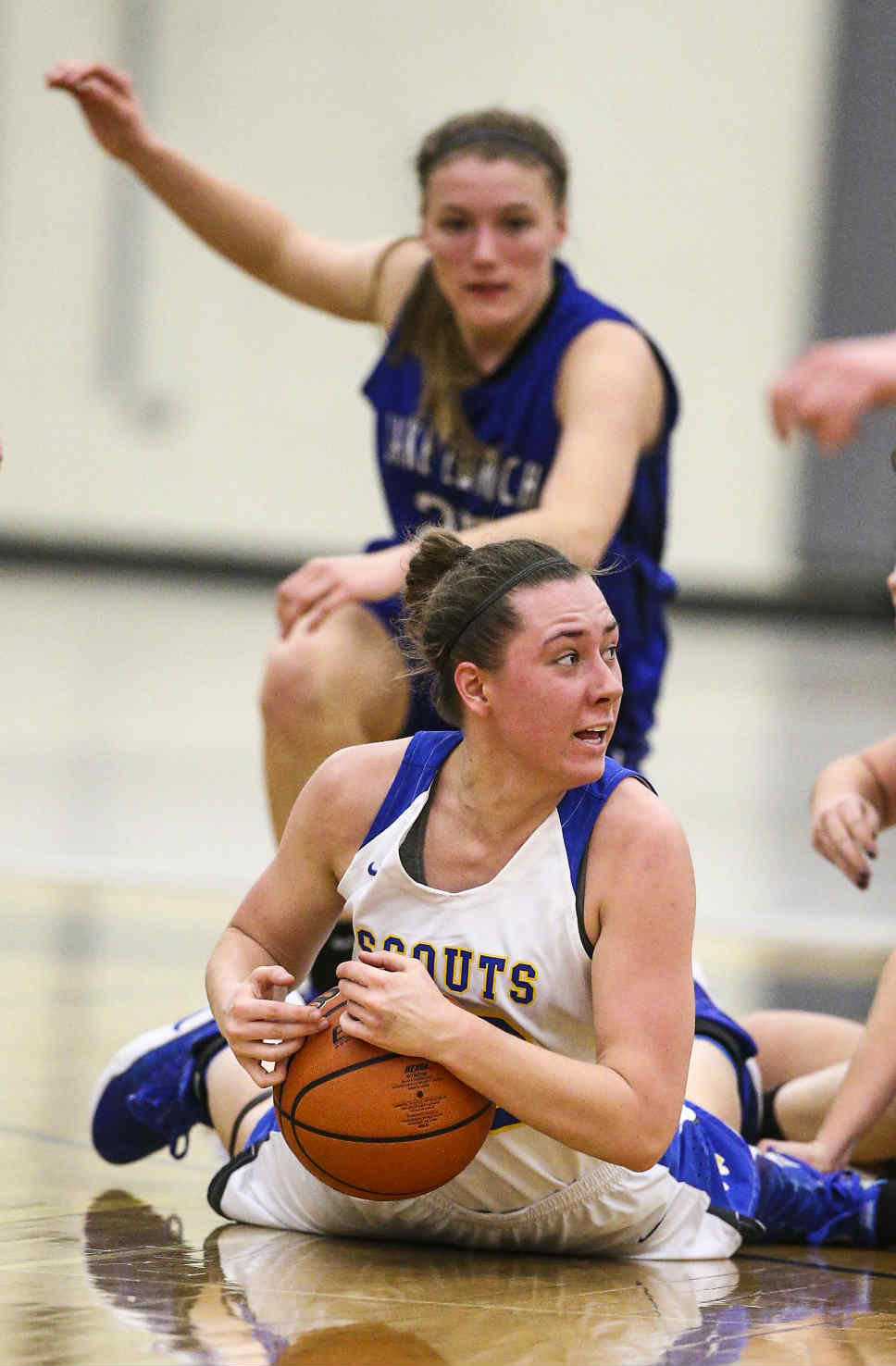 Audrey Kaus dives on the floor for a loose ball during the regional title game. PHOTOGRAPHY BY JOEL LERNER