LAKE FOREST — Though Deer Path Middle School students, teachers and parents span generations, they have at least one thing in common. They all say they grew up on The Beatles.

The Deer Path community got a chance to get closer to The Beatles April 9-12 when the John Lennon Educational Tour Bus parked outside the school, giving students a chance to see the mobile recording studio.

Elizabeth Flynn, a Deer Path sixth grader, came off the bus after a 20-minute tour excited about the message of the vehicle, the equipment, the instruments and the music she heard.

“I know about The Beatles and sing all their songs,” said Flynn. “It’s really cool to see the bus.”

One of Flynn’s teachers, Chana Wilczynski, who instructs the children in drama, had a similar reaction to her student. Wryczynski said the music is important and so is the message of peace Lennon’s music conveys.

“I grew up listening to The Beatles,” said Wilczynski. “Very early in my life they were a huge influence on me. The message is as fresh today as it was when (Lennon and Paul McCartney) wrote the songs.”

Teri Albus, president of the Spirit of 67 Foundation, which funds school programs through grants that are not included in the School District 67 budget, said The Beatles wrote and performed music loved by her, her parents’ generation and her children. 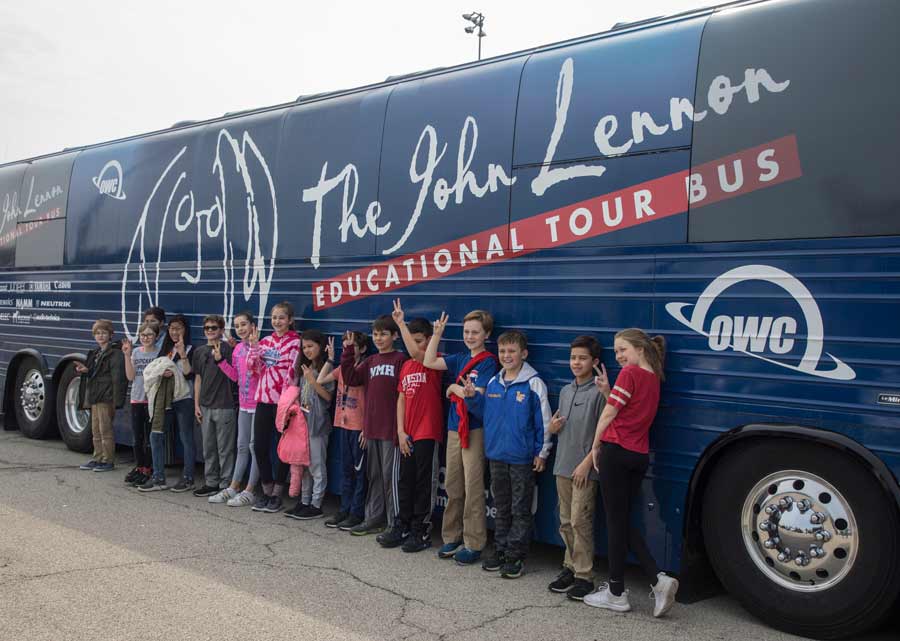 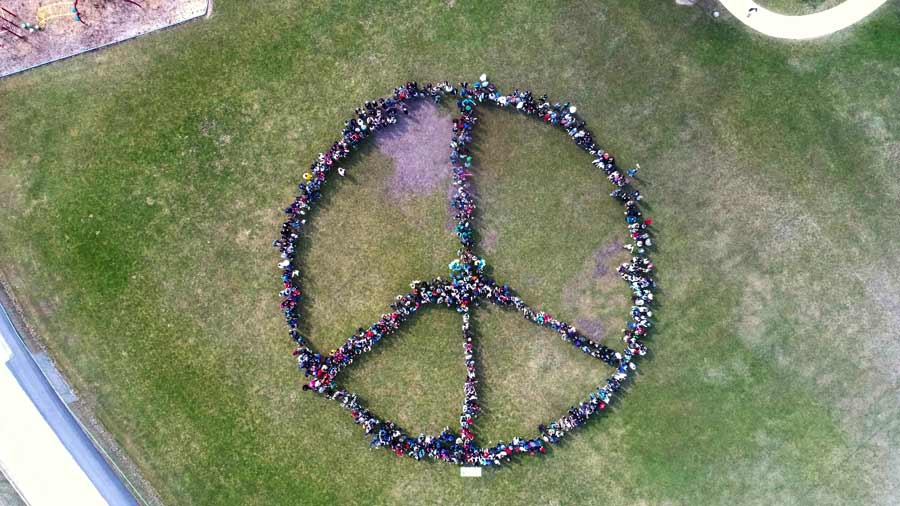 A grant from the foundation brought the Lennon bus to Deer Path Middle School.

The bus is a mobile recording studio for audio and high-definition video productions. It tours the country approximately 250 days a year, according to Steven Meloney, one of three recording engineers who live on the bus, giving tours and lessons to students.

Meloney said the program was started 21 years ago by Yoko Ono, John Lennon’s widow. It offers students not just tours but the opportunity to partake in digital media production workshops learning how to write, record and produce original songs, music videos, documentaries and life multi-camera productions.

There is another purpose.

“Yoko Ono wants to spread John Lennon’s message of peace that was in his songs,” Meloney said just after he played a few bars of “Imagine,” one of Lennon’s hits, on the bus’ sound system.

After two classes finished their tours April 9, they went into the cafeteria to draw peace signs on paper. Most of the student body formed a giant human peace sign outside the school on April 11.

“It was real exciting and inspiring,” said Lindsay Van Vleet, a Deer Path sixth grader, “It teaches a lot of young people about peace.”

Meloney and his two colleagues were surprised the bus was parked at Deer Path for four days. He said one day at a school is the norm and maybe two.

“It took a lot of phone calls,” said Corey Ames, the band director at Deer Path.

Ames said the four-day effort was the result of his collaboration with Sabiha Rahman, the fifth and sixth grade STEM (science, technology, engineering and math) teacher at the school, and a lot of help from the foundation.

Ames first learned about the bus five years ago when he was teaching at Loyola Academy. When he arrived at Deer Path for the 2016-17 school year, he began an effort to bring the bus to Lake Forest. He and Rahman wrote a grant request to the foundation, but it only looked like that would work for two days.

With approximately 900 students at the school, two days at Deer Path would leave out approximately half the student body, according to Principal Tom Cardamone. That is when Ames and Rahman went back to the foundation.

“I went to the Spirit because I knew they would know what to do,” said Ames. “How do you decide which students would be left out?”

Nicole Korczak, the foundation’s vice president for grants, said they took another look at the grant request and found the additional money to get it there for four days. Albus said the foundation awarded 23 grants totaling $278,890 this year.

“We’re all about inclusion,” said Korczak. 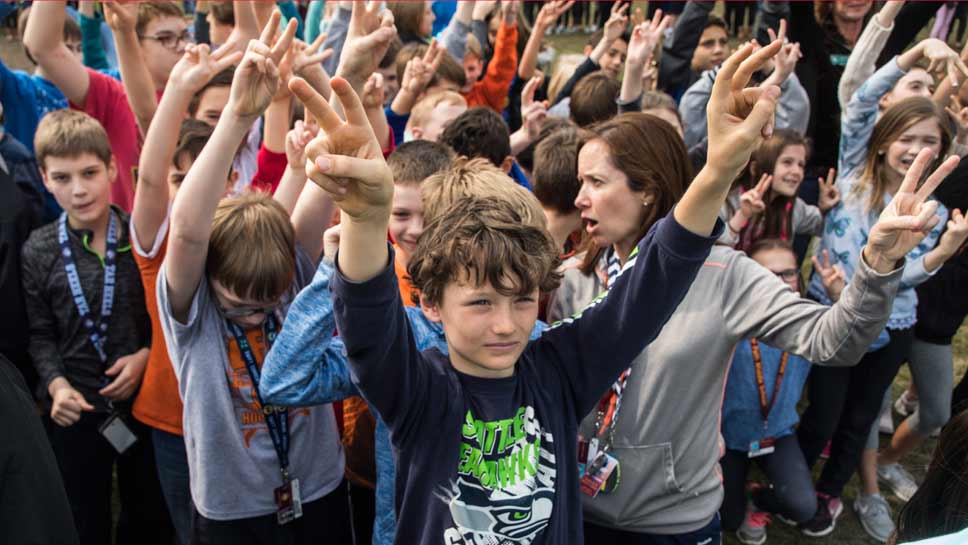 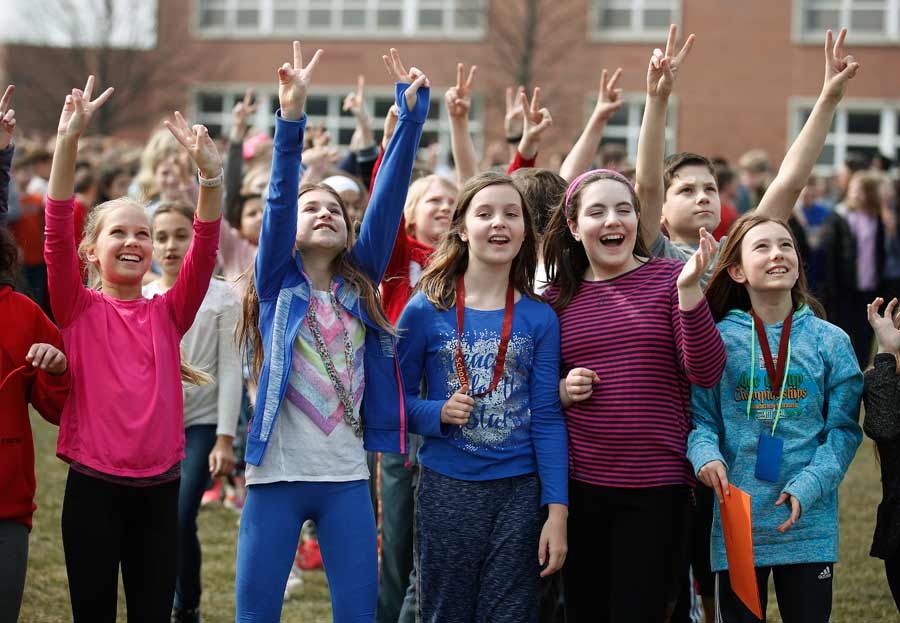 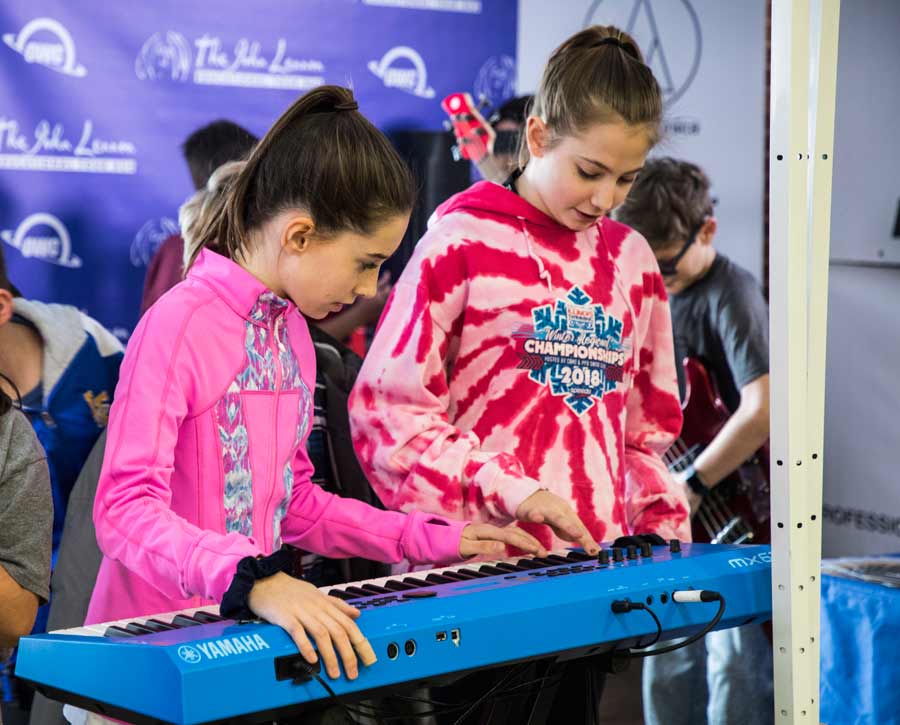