WILMETTE – Wilmette waved through an affordable housing development proposed for the former American Legion Post property at 1925 Wilmette Avenue at a late night village board meeting on April 10.

Finding affordable housing a public benefit to the village, the Wilmette Village Board unanimously approved a plan by Housing Opportunity Development Corporation (“HODC”).

“This is workforce housing. This is a significant public benefit derived from the project,” President Bob Bielinski said.

HODC first applied for a special use permit through the village’s Planned Unit Development (“PUD”) process to construct an affordable housing apartment building at the American Legion site in September 2015. Initially, the project received tremendous push-back from the community, with many residents objecting to a plan that didn’t accommodate families.

After a series of community meetings, HODC revised its plan to become family-friendly with 16 units, comprised of 10 one-bedrooms and six two-bedroom apartments, as well as 20 parking spaces. The plan also includes set asides for veterans, people with disabilities and people with very low incomes, according to Richard Koenig, HODC’s executive director.

The income requirements are set at a maximum of sixty percent of the area median, while one-bedroom units will rent for $615, and two-bedroom units for $800, Koenig said.

The project includes some variations, including a height variation of three stories instead of the two-and-one-half permitted, as well as a floor area ratio (“FAR”) that exceeds the maximum requirement. Through the PUD process, HODC must show public benefits to the community outweigh the zoning relief sought.

Likewise, during the pubic comment period, the vast majority of residents who spoke — many wearing stickers that said “YIMBY” for “Yes in My Backyard” — expressed their support for a project that would provide affordable housing to anyone.

John Daniels, who has lived in the village for over 50 years, expressed his support for the project. “It would truly be a good thing to encourage more diversity in the village,” he said, noting that the village has become more affluent over time.

Lisa Berganza, a Wilmette resident who hopes her Autistic son will become a resident at the project, spoke in support on behalf of families whose children have disabilities. “It is such an important thing for kids to get to stay in the same community,” she said. Berganza noted that Wilmette is a wonderful community with so much to offer people with disabilities, but it is sorely lacking in affordable housing.

Those who spoke against the project primarily focused on the issue of safety and the potential impact on property values. Chris Lee worried about HODC’s ability to manage the building, pointing to an HODC property in Evanston that has suffered problems. “As for their track record, I think they have a horrible track record for this type of housing,” he said.

Paul Kesselman, who lives next door to the proposed site, expressed worries about neighboring property values. Noting a chart Koenig presented that indicated that properties could be impacted by five percent, Kesselman said that could be significant for a $500,000 property. “This is the wrong project for this site,” he said.

But when the village board members looked at the benefits HODC offered, against the relief requested, they found that the benefits outweighed HODC’s request. President Bielinski led the discussion, asserting that the FAR request of 1.36 — above the 1.0 permitted by the village’s zoning laws — was by far the most significant relief sought. Within the context of the existing density in that area, where the surrounding buildings included over 200 apartment units, he found the request for a 16-unit building reasonable.

“Simply viewed, this is a modest apartment building being built within an appropriate zoning district with a density that is consistent with the existing bulk and density already found in the neighborhood,” President Bielinski said.

Trustee Daniel Sullivan agreed. “I think the (FAR) is actually reasonable given the density in this location,” he said.

Other trustees spoke about their confidence in the success of this project. “I think it is important for everyone in this community for it to be a successful project,” Trustee Senta Plunkett said.

Trustee Kathy Dodd expressed her confidence in the project, given Koenig’s reassurances that HODC had learned a lot from past experiences. “We want this to be successful. This is really important to our community. This is yes in our backyard for everyone in this community,” she said.

Trustee Joel Kurzman agreed that the village was in this together. “There might be some risk to this but it is borne by everyone,” he said. “I do see affordable housing as a huge public benefit,” Trustee Kurzman added. 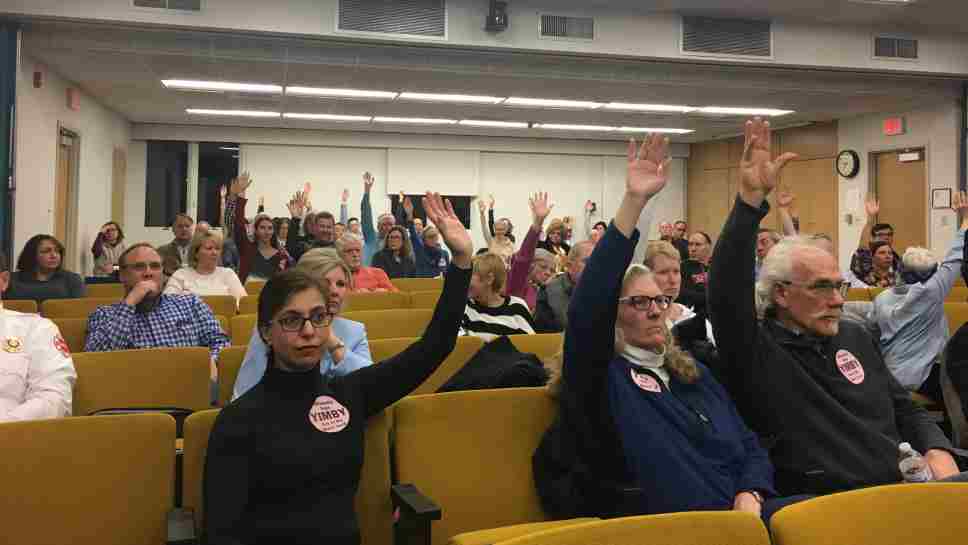 Wilmette residents show their support for an affordable housing project approved at a board meeting on April 10.