LAKE FOREST – The Lake Forest-Lake Bluff Historical Society invites the community to a fascinating lecture with Thomas Dyja, renown author of The Third Coast: When Chicago Built the American Dream . The event will take place in the historical society’s new museum at 509 East Deerpath in Lake Forest on Sunday, April 22 at 3 p.m.

Dyja’s critically acclaimed history of Chicago at mid-century tells the story of the city in its post-war prime and explains Chicago’s profound impact on modern America, and the world, featuring many of the incredible personalities that shaped American culture. 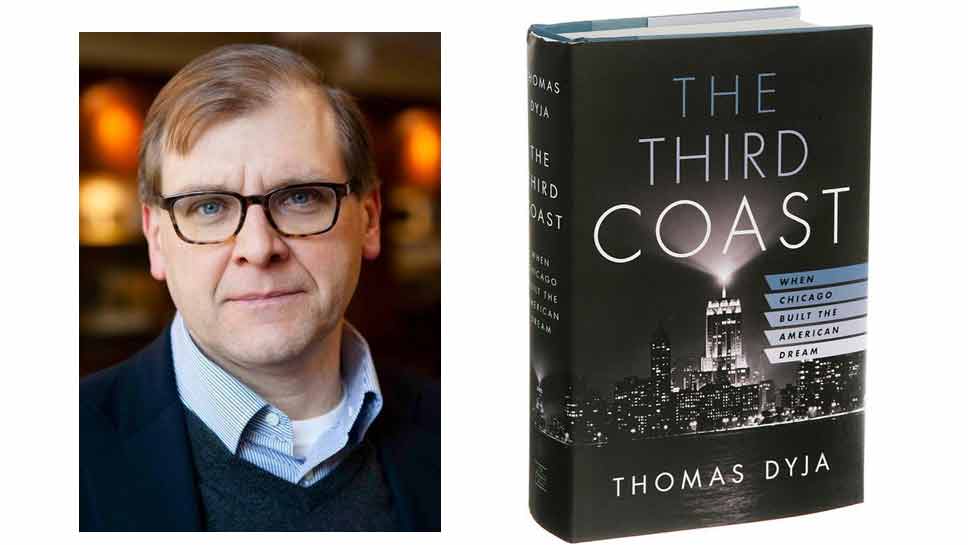 Author Thomas Dyja and his new book, The Third Coast

Though today it can seem as if all American culture comes out of New York and Los Angeles, much of what defined the nation as it grew into a superpower was produced in Chicago, then the nation’s central clearinghouse, laboratory, and factory. Between the end of World War II and 1960, Mies van der Rohe’s glass and steel architecture became the face of corporate America, Ray Kroc’s McDonald’s changed how we eat, Hugh Hefner unveiled Playboy, and Chess Records supercharged rock ‘n’ roll with Chuck Berry. The outlaw novels of Nelson Algren, the poems of Gwendolyn Brooks, the gospel music of Mahalia Jackson, the urban blues of Muddy Waters, and the avant-garde jazz of Sun Ra all led toward the future. Studs Terkel’s innovative radio shows and the intimacy of the Chicago School of Television changed media, and Second City alumni are everywhere in entertainment.

Despite this creative diversity, race informed virtually every aspect of life in Chicago. As whites either fled to the suburbs or battled integration, urban planners designed away “blight” with projects that marred a generation of American cities. The election of Mayor Richard J. Daley in 1955 launched a frenzy of new building along with a self-satisfied provincialism that sped the end of the city’s central role.

The Third Coast tells the story of Chicago in its postwar prime and explains its profound impact on modern America, and the world.

Now living in New York City, Thomas Dyja was born and raised as a third generation Chicagoan on the Northwest Side. One of his grandfathers was a waiter at the Edgewater Beach Hotel; the other made pipes at Chicago Faucet. A graduate of Columbia University, he stayed in New York after college to go into publishing. After working as a bookseller and some time on the agency side at ICM, he went to Bantam Books, where he dealt with popular culture, from the original Rotisserie League series to Richard Saul Wurman, creator of the TED conference. From there, he became a partner in the book packaging company Balliett & Fitzgerald, creating books for clients such as ESPN, People magazine, USATODAY, and A&E Television and editing four anthologies. From packaging he went on to write three novels (Play for a Kingdom, Meet John Trow, and The Moon in Our Hands), a biography of civil rights pioneer Walter White, and to co-write a book on education with former New York schools chancellor Dr. Rudy Crew titled Only Connect.