The grandfather clock continues to rest on a mantel inside the Asma house in Lake Bluff.

Lake Forest High School senior and Lake Bluff resident Eleanor Asma had built it in a woodshop class in her sophomore year.

“I was the only girl in the class,” Asma recalls proudly with a blinding smile.

In no time she began to spend time in a room — later dubbed “The Craft Room” — in the Asma basement. Also a recreational painter and self-taught ukulelist, Asma still exercises her toned creative side with all kinds of materials in the room.

“I cut things up and glue them together,” she says.

Asma’s world fell apart, temporarily, in April 2014, when her brother Ben (LFHS, ’13) died by suicide as a freshman on the George Washington University campus in Washington, D.C.

Some five months later, Eleanor Asma became a highly involved freshman at LFHS, acting in plays, performing for the glee club and competing in cross country and badminton — all on top of her commitment to dance seven days each week.

She then made the LFHS poms squad as a sophomore and began serving as a receptionist at St. Mary’s Catholic Church in Lake Forest. 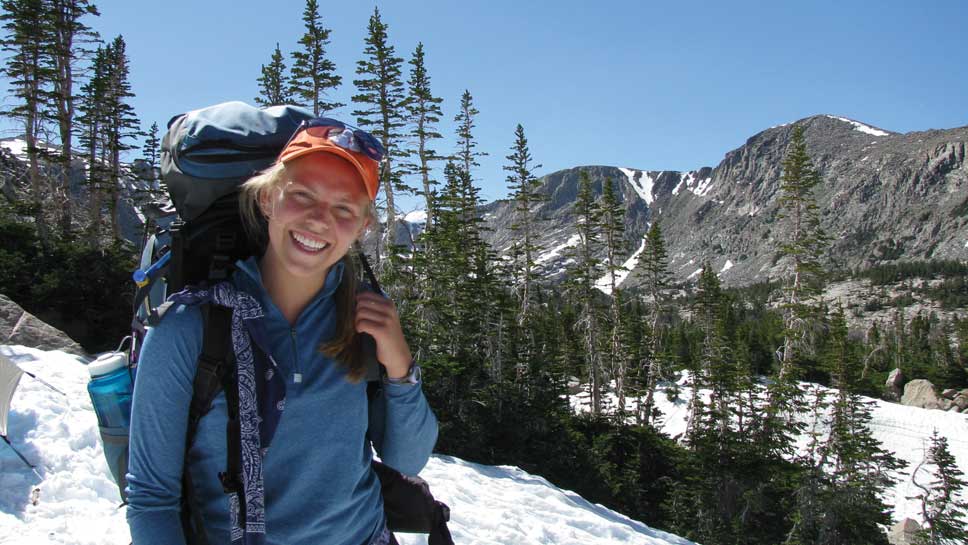 Eleanor Asma once told her parents: “I could live in a tent.”

“About halfway through my junior year,” Asma remembers, “I had to pull back, think seriously about what my busy life was doing to me. I felt like I was … crashing.”

Her life today, as a reigning member of LFHS prom royalty: busy but not crazy busy, productive, rewarding, enriching.
The outdoors enthusiast who plans to study nursing at the University of Utah writes a newspaper column (cleverly titled “For the Health of It”) for The Forest Scout and volunteers as a co-facilitator at Willow House, a social service organization dedicated to helping children, teens and families who are coping with death and dying. She’s active in grief support at LFHS, too. Among the topics she has written about for the school paper are caffeine, paper cuts, suicide, eating disorders, seasonal affective disorder and depression.

“I’ve received a lot of positive feedback from students at school,” says Asma, a first-year contributor with The Forest Scout and a Critical Dialogue podcaster with LFHS classmates Elizabeth Porter and Brett Chody. “Some thanked me for addressing an issue they thought needed to be addressed. And some others told me, ‘I’m glad I read what you wrote; you helped me.’ ”

Plop Asma anywhere along a mountain range, at any time of the year, and she’d be able to fend for herself. She survived a harrowing trek with a group of NOLS (National Outdoor Leadership School) peers around the Wind River Range in western Wyoming. Pouring rain, in windy and cold conditions, battered the contingent after a long day of hiking and before a four-day expedition to conclude the journey. Some of the hikers suffered from hypothermia.

“There we were in tents, relying on teamwork,” says Asma, who was voted one the group’s leaders for the expedition and intends to complete an out-of-state course this summer to earn certification as a wilderness first responder.

“Everyone rallied,” adds the sister of Clemson University sophomore Charlie Asma, an industrial engineering major. “Anywhere near a mountain is my happy place. I once told my parents [Ben and Leann], ‘I could live in a tent.’ I’ll never forget my first camping trip, up in Wisconsin as a fourth-grader. Being outside all that time, carrying a canoe and traveling in it, being active with others … I loved it, loved every part of the experience.”

Asma survives — and thrives — in her life off the trails with a sturdy cast of influential figures.
“My mom,” she says, “is the hardest worker I know. I have always admired her and appreciated her support. A lot of my friends inspire me, too.”