HIGHLAND PARK – About a year after Dr. Nancy Nora donated her kidney to a patient, she became the subject of her son Michael’s sixth grade paper on courage.

He wrote, “My mom has courage, because she donated her kidney.”

Dr. Nora, a nephrologist (kidney doctor) at NorthShore University Highland Park Hospital, thought her son’s insightful story ending rang true: “My mother is a happier person now that she has donated her kidney.”

But it made her wonder exactly what kind of mom she was before that.

Today the Lake Forest resident’s youngest child is a college freshman, and Dr. Nora still holds his paper dear. His two older siblings are also away at college. 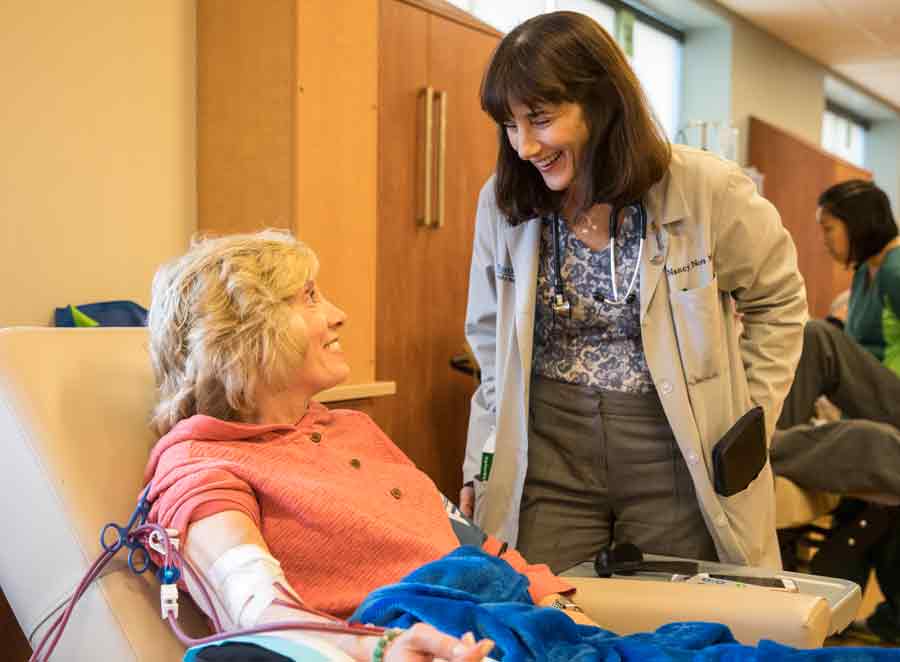 Dr. Nora’s selfless donation in 2008 should be celebrated every day, but it holds a special meaning this month, as April is National Donate Life Month (NDLM). Every April, NDLM features local, regional and national activities to help encourage Americans to register as organ, eye and tissue donors and to celebrate those who have saved lives through the gift of donation.

Here are a few startling statistics according to the American Transplant Foundation :

After Dr. Nora learned she wasn’t a suitable donor for any of her kids, she decided to donate her kidney to a male patient in July 2008. He was on dialysis and she knew that they were the same blood type and close in age. Her only regret was not having the ability to donate to her other patients in need.

“I was about 50 and thought I should do it when I’m relatively young and healthy and my kidneys were young and healthy,” said Nora. “As a kidney doctor I can say that you don’t need two kidneys. One kidney is more than enough.”

Dr. Nora still sees her patient on a semi-regular basis and his kidney function is excellent. He leads a very active life, as he’s traveled through Europe and goes snow skiing.

She explained that the patient was born in Russia and his father died young while he was on dialysis for Polycystic Kidney Disease (PKD), which he also inherited.  Additionally, he lost his mother to breast cancer at an early age. Later he and his young bride brought his little sister with them when they emigrated to the United States.

She said organ donation has become so easy and safe, as the potential donor is screened in great detail to ensure that the person is in very good health and there is no undue risk.

“Now with microscopic nephrectomies, I went into the hospital Thursday morning and was home to watch the news by Friday evening,” she said.

By the next day, Saturday, Dr. Nora walked around the neighborhood and was back to work full time the following Monday.

“People have this idea that it’s a huge surgery and I don’t feel any different now than when I had two kidneys eight years ago,” she said.

Nora is the medical director of Fresenius Kidney Care in Highland Park.

“I think the dialysis companies have become very quality and outcome driven,” she said. “They are monitoring the patients and are more concerned with overall health while paying close attention to diet.”

Every year people develop end stage renal disease (ESRD) when their kidney function is less than 10 percent. At that point many patients begin dialysis.

“I love dialysis because I think it’s an amazing technology,” said Dr. Nora. “It’s the only technology where you can live a very long and normal life without an organ. We don’t have a heart pump that someone can live on for 20 years.”

She described the two different types of dialysis, “as the beauty of where we’ve come as a science.” Peritoneal is administered through the abdominal cavity with a solution of fluids that are later drained and is typically done by the patient at home every night. Though it’s not the most efficient, Nora believes it’s especially helpful to those who don’t live near a dialysis center.

Hemodialysis is typically done at a center for three to four hours about three times a week. It’s the process where blood is removed from the body and run through a filter where its cleaned of toxins and the electrolytes are changed and then sent back into the patient.

“Clearly a transplant is the way to go, but I do think people can live quite a normal life on dialysis as well,” said Nora. “Most people really do feel that dialysis is used to treat very sick and frail people and I think they’d be surprised to know that a variety of patients suffer from chronic kidney disease.”

She added that the most common causes are diabetes and hypertension, but there are familial diseases and genetic diseases. People can start dialysis as early as before the age of 10 or in their 90s.

“One of the largest growths in dialysis is in the aging population, because dialysis has improved so much that we know it’s very tolerable for people and people can live a long time,” said Dr. Nora.

Unfortunately, dialysis is “a huge economic strain on the patient and society” and it’s a social problem for young mothers and working fathers.

“It makes it hard to work when you have to be on dialysis all of the time and it’s expensive for society as well,” said Dr. Nora.

The average wait time for a kidney transplant in Illinois is five to seven years, and it has gotten longer just about everywhere, because there’s a greater need for them.

“The supply of cadaveric organs is limited and a cadaveric kidney is not as good as a living donor,” said Nora.

“There are a lot of organs that go to waste because people don’t have their wishes known,” said Dr. Nora. “I think that the assumption should be that everyone is an organ donor unless there is a specific reason not to. It should not be left up to people to decide on their driver’s license.”

She encourages people of all ages to become organ donors. “For something relatively minor and safe, you can have a huge impact on someone else’s life,” she said.

Editor’s note: This story hits close to home for DailyNorthShore reporter Julie Kemp Pick, since she has been a dialysis patient of Dr. Nancy Nora at Fresenius Kidney Care in Highland Park since January 2018. The staff has been extremely warm and attentive and has even graciously given Julie foot massages to alleviate occasional cramping during dialysis. Dr. Nora is not the only kidney donor who contributed to this story, as JWC Media photographer Joel Lerner donated a kidney to his dad in 1990.