But some parents in Winnetka are challenging the idea that young children should be given a smartphone. Kristen Hagan, a mother of three girls ages 2, 6 and 9, was concerned when she realized that children only a year older than her daughter at Crow Island Elementary School were being given phones.

“In the last year I heard more and more about kids getting phones. While it seemed far away (for my daughter), I realized that it is not that far, and I began to think about all of the implications that came with that responsibility,” Hagan told DailyNorthShore.

But when Hagan heard about a new movement called Wait Until 8th, she realized there may be an opportunity to change the conversation. Wait Until 8th was launched in the spring of 2017 by Brooke Shannon and a group of Austin, Texas parents, to create a supportive network of parents who pledge to wait until 14 years old, or 8th grade, to give their child a smartphone. According to the website, one person signs a pledge not to give his or her child a smartphone, and when 10 families from the same grade have also taken the pledge, the pledge takes effect. 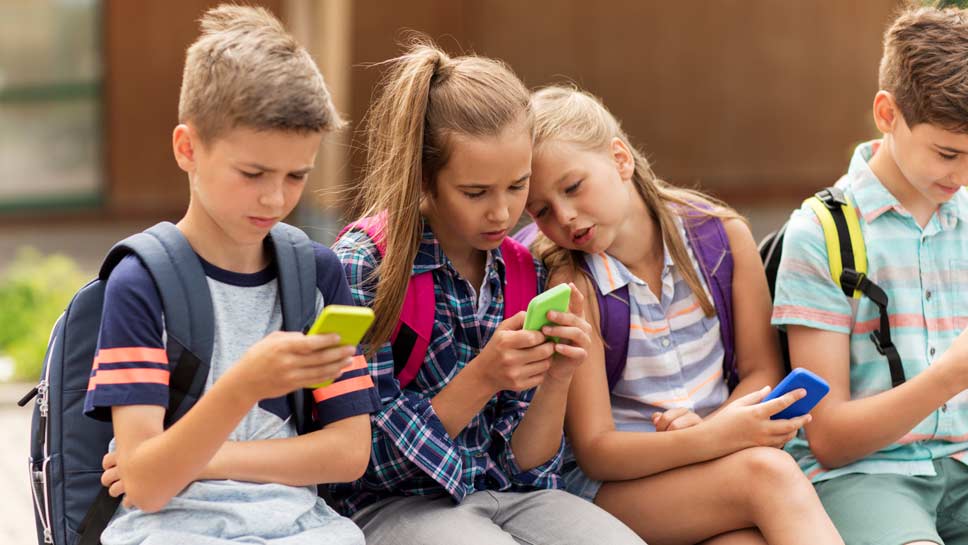 “It’s now or never. We need to shift what’s normal, acceptable and expected, and shift it to what we want it to be,” said Winnetka resident Kristen Hagan about buying smart phones for children.

So far, Hagan said several families have signed up from Crow Island, and she is hopeful as word spreads that they’ll have 10 families pledging from each grade. “I am not the only one who has this agenda,” she said, noting the positive response she has received so far.

While Hagan admits that she has never been a community organizer, she believes that the Wait Until 8th movement has potential to change the way parents think about smartphones. “It’s now or never. We need to shift what’s normal, acceptable and expected, and shift it to what we want it to be,” Hagan said.

Hagan has been in touch with another North Shore mom who is organizing a similar effort at Greeley Elementary School in Winnetka. She plans to host social events around the cause to create a supportive environment for families.

While Hagan sees Wait Until 8th as a potential game changer, Dr. Devorah Heitner, author of Screenwise: Helping Kids Thrive (and Survive) in Their Digital World, and founder of Raising Digital Natives, cautions that the focus should be less on the age of a child, and more on mentoring a child on how to responsibly use a smartphone.

“I don’t think there is a good age or a bad age to provide a smartphone. It depends on your family and mentorship,” Dr. Heitner told DailyNorthShore. She noted that handing a phone to an 8th grader without appropriate mentoring and support won’t get good results.

Dr. Heitner also pointed out that many young children have access to devices, such as tablets, that have all the same capabilities as smartphones. “I think Wait Until 8th is not a be all and end all solution. I think people are looking for one because it is so hard and overwhelming,” Dr. Heitner said.

Dr. Heitner believes that whenever parents decide to give their child a tablet or smartphone, they need to mentor their child so that they develop healthy behaviors, such as charging a device away from their bedroom at night, or remembering the human element before sending a text.

Lake Bluff dad Jim Wicks agrees. “The cork is out of the bottle,” said Wicks, a cell phone designer who worked as head of design for Motorola Mobility. “I feel that limiting where it is used in the home and what hours it can be used is critical in the formative years. Specifically no phones and computers in the bedroom at night past a specific time. No exceptions. That’s one tactic, and I’m sure there are others.”

Dr. Heitner noted that Wait Until 8th could be effective as part of a larger conversation, about how parents can support their children when they decide to give them a smartphone.

But the movement seems to gaining momentum. Brooke Shannon noted in a blog post dated December 12, 2017, that over 6,000 families from all 50 states have signed the pledge.

Like many other parents who have decided to take the pledge across the country, Hagen expressed optimism that the movement would at least make people think twice before buying their child a smartphone. “I am excited. I think there is a lot of positive moment and it is all in the name of good,” Hagan said.