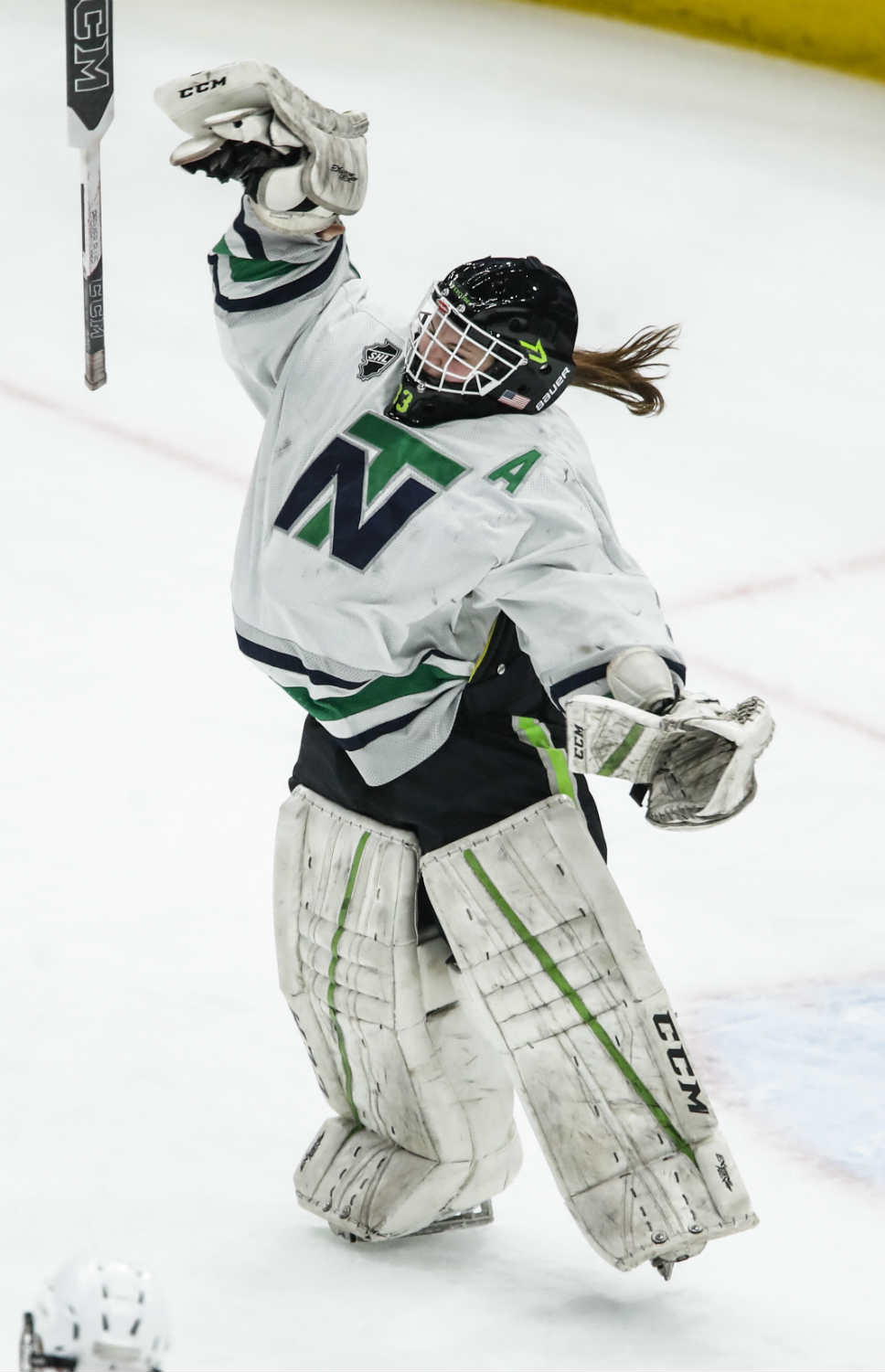 New Trier goaltender Abby Wieczorek tosses up her stick as she reacts to her team’s win over Glenbrook South in the state title game on March 24. PHOTOGRAPHY BY JOEL LERNER

Abby Wieczorek, in her distinctive soprano-esque voice, hinted — heavily hinted — that she might’ve done a little trash talking the other day.

She probably couldn’t help herself.

The extremely confident goaltender was going up against some very familiar faces, when New Trier took on Glenbrook South in the Amateur Hockey Association Illinois (AHAI) girls hockey state championship game at United Center on March 24.

Adorned in a borrowed white No. 31 jersey with blue and green trim, Wieczorek spent 45 intense minutes — three 15-minute periods — gathering in and pushing away pucks from three of her closest friends: GBS’s Lily Cataldo, Maddie Dunham and Madison Itagaki.

All four skate for the highly regarded Chicago Mission U19 team.

Thus, that big smile on her face in a postgame interview was completely warranted. Wieczorek thoroughly was on her game in leading New Trier to a 5-1 victory over the defending state champs.

The Wieczorek Wall was sturdy. With the help of Maddie Babnik, Serena Seiple, Mae Olshansky, Maureen McNerney and others, New Trier finished the game with six penalty kills, including a 5-on-3 advantage late in the second period.

Wieczorek will use that same mindset, when she switches uniforms and plays for Chicago Mission U19 in the Tier I USA Hockey National Championships in Marlborough, Massachusetts, on April 5-10.

With the Mission, Wieczorek shares the goalie duties with standout Eryn Cooley of Barrington. Wieczorek was the winning goalie in the Mission’s 2-0 regional title win over the Madison Capitols on March 19.

At New Trier, she divided time with talented junior Hayden Snow, an all-stater who fashioned a 1.62 goals-against average with a .895 save percentage this season.

Talk about a win-win situation.

“Had to go with the hot goalie,” Brush said of Wieczorek, named MVP of the state championship game. “But when you have two great goaltenders, it’s a really hard call.

“Last night, our captain Maureen McNerney called and asked me who was starting,” the coach added. “I told her that we were going with Abby. But that we needed both of them to have great warm-ups.”

Wieczorek was the playoff pick. She was in goal in New Trier’s 4-3 overtime win over Loyola Academy in the state semifinal at Edge Ice Arena in Bensenville on March 5. She recorded 22 saves, including a few in the spectacular category.

“We knew playing against her would be tough,” said Dunham. “She comes ready to play. There’s nothing easy with her.”

Wieczorek never really wavered, but she did give up a second-period goal to Dunham.

“Might have gotten a little too relaxed,” said Wieczorek, noting that NT (21-5-1) had a 3-0 lead at the time. “[Dunham’s goal] got me back in it. I knew that we couldn’t afford any more breakdowns.”

Wieczorek simply was lights-out in the final period and a half.

“I really don’t think she understands how good she is,” said Brush.

But the New Trier coach is certain of one thing: Wieczorek definitely is an ardent and true-blue hockey player.

In addition to her six games in the net, Wieczorek (4-1-1) appeared in 21 games as a position player. She ended up with four goals and six assists.

“I’m pretty sure that she’s the only goalie in the state with 10 points,” said Brush.

And you also can be pretty certain that she’s the only girls hockey player in the state who borrows her brother’s game jersey on Game Day.

“It’s his jersey. The very same one,” said Wieczorek. “And if [New Trier Green] were in the [boys state title game which also was held at United Center on March 24], I’d have to run it over to him right now.”

The sweater improved to 2-0 on the Chicago Blackhawks’ home ice. Last year at United Center, Hayden Wieczorek wore the jersey and was the winning goalie in New Trier Green’s 4-2 win over Providence in the AHAI Red Division state title game.

Abby Wieczorek wore it out of necessity.

That’s not the case with her Mission goalie jersey (No. 33). 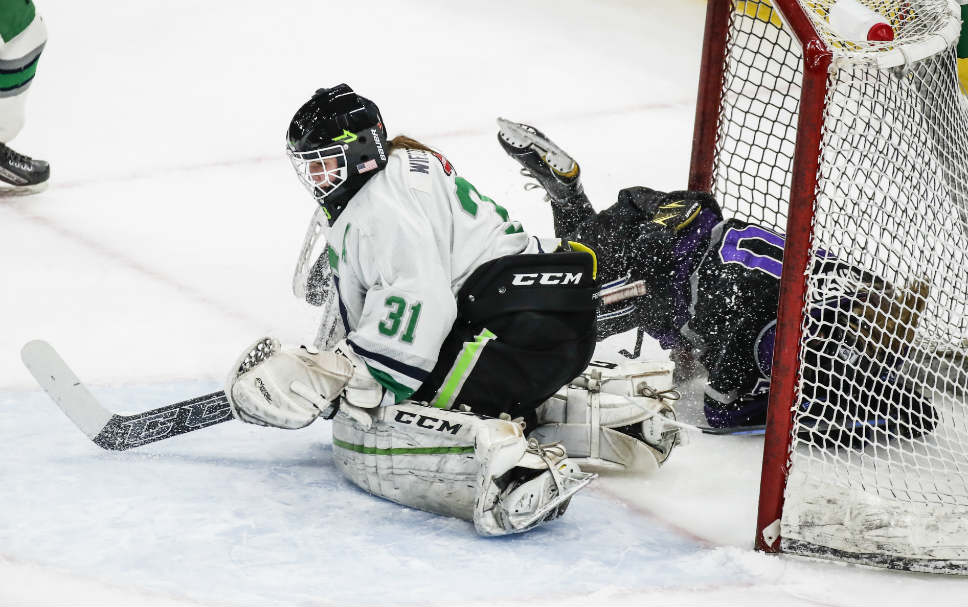 Abby Wieczorek makes a save as Glenbrook South’s Hannah Jensen crashes into the net during the state title game. PHOTOGRAPHY BY JOEL LERNER 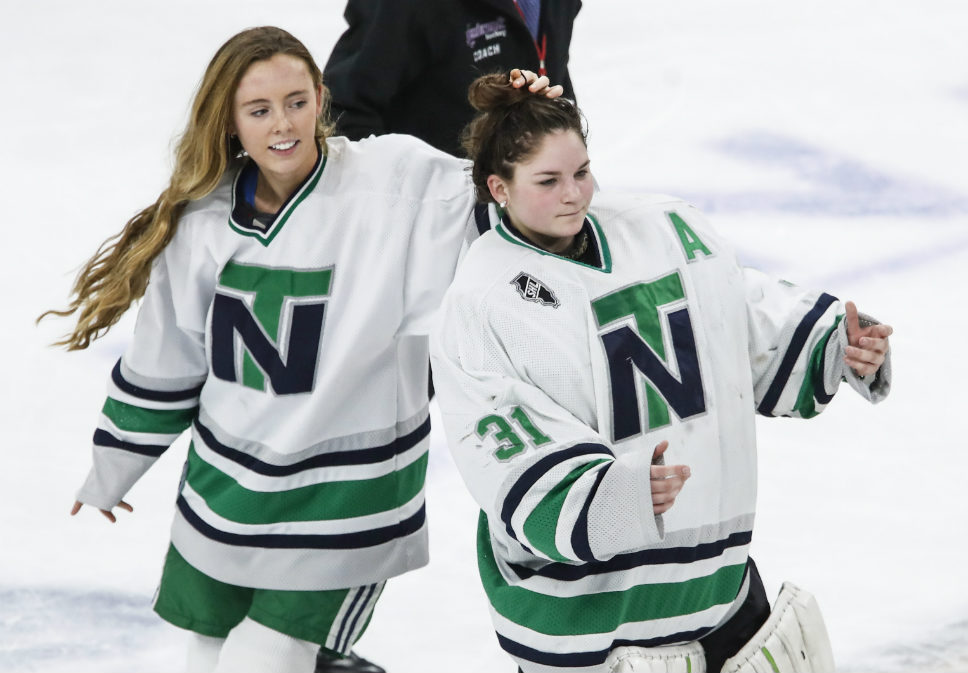 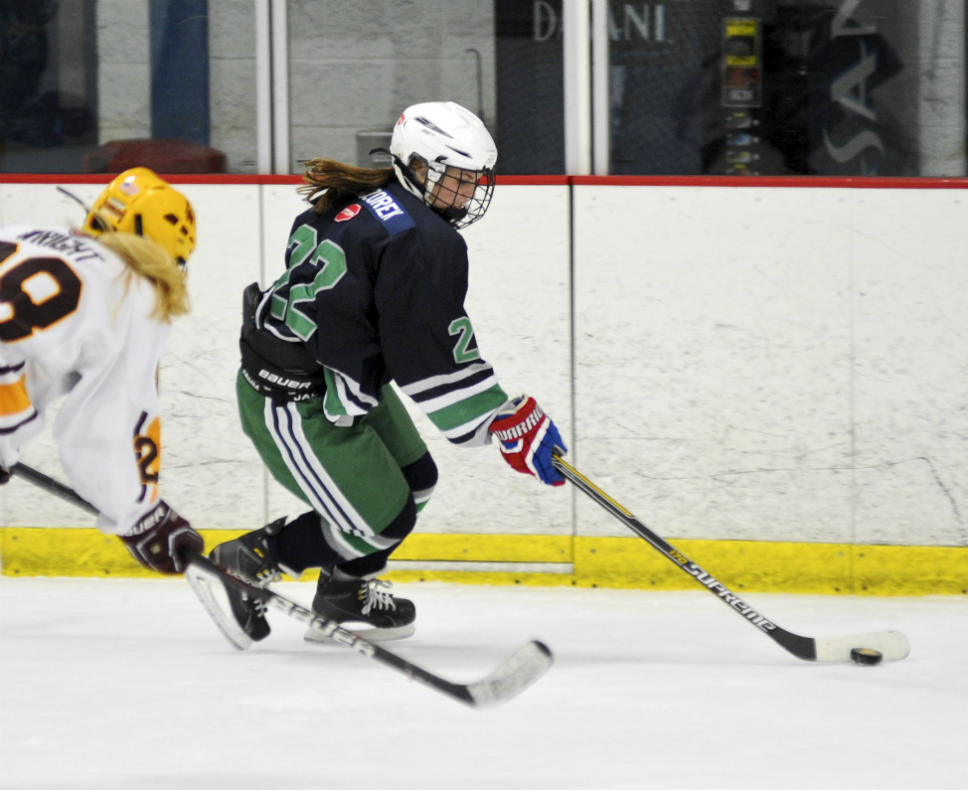 Abby Wieczorek competes as a position player during earlier action this season. As a forward, she had four goals and six assists. PHOTOGRAPHY BY GEORGE PFOERTNER