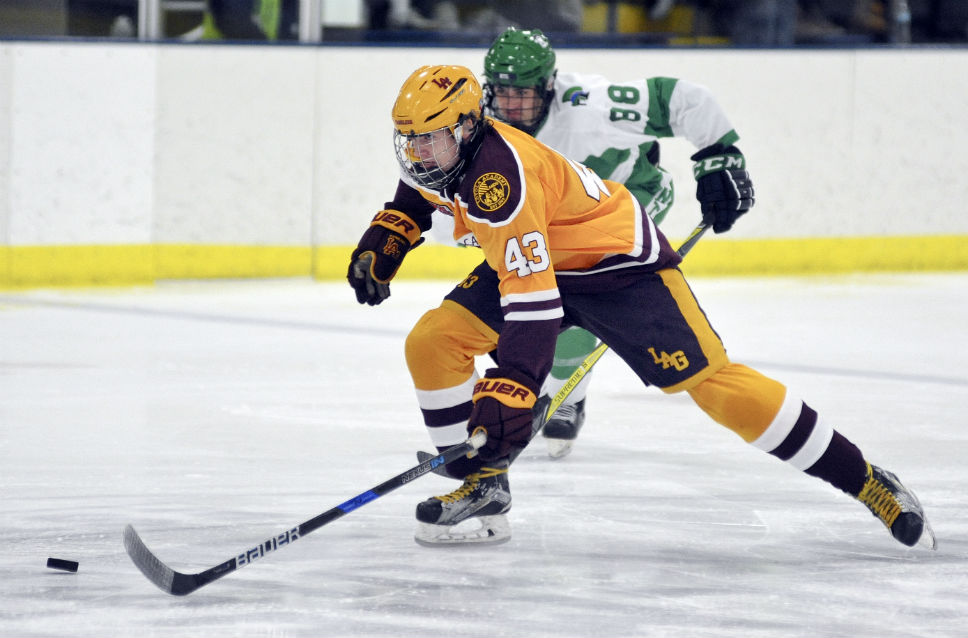 But it triggered countless conversation starters among onlookers, young and old, and made older folks recall the songs of Art Garfunkel, a folk rock singer with a mountainous, puffy, curly head of dirty-blond hair in the 1970s.

“Yes, I’ve heard of him,” Stevens said of Garfunkel, whose final album with Paul Simon, Bridge over Troubled Water, hit record stores in 1970.

“Danny is a workhorse, and he’s fast, so fast,” said junior defenseman and Championship Game MVP Nick Liebers, who scored the game-winner with 4:24 left in the third period. “But what makes him so good, so hard to handle and defend, is his shiftiness on the ice.”

LA Gold’s program had been stuck on state runner-up finishes since its last state championship season (1995-96). LA skaters had to settle for silver in each of Ramblers’ previous seven title-game appearances. Stevens and his mates received inspirational messages via video — texted by Gold alumni — in the days between their semifinal defeat of Glenbrook North’s Spartans on March 12 (at Edge Ice Arena in Bensenville) and the title game on the Chicago Blackhawks’ home ice 12 days later.

“I’m very happy for our program,” Stevens, a four-year LA Gold member and an AHAI all-stater in his final season, said. “I learned a lot this year … learned we can overcome any obstacle.

“Sophomore year,” he added, “I was immature. I grew as a junior and matured some more in my senior season. This year? I enjoyed being a captain and getting the opportunity to play for a state championship.”

DJ LaVarre became head coach of LA Gold in 1993 and guided the club to state titles in 1995 and 1996. The happiest 55-year-old following last month’s Stevenson-LA Gold tilt at UC had to be LaVarre, whose 25th squad finished with a 53-10-2 record.

“Way too many second-place finishes,” said the coach, smiling and shaking his head before a throng of journalists. “What our great group of young men did today, this win, it’s also for all of the guys on those runner-up teams. We told our guys today to look up at the stands, notice all the people here for the game, for them. We also told them to soak it up … all of it.

“But when that puck dropped,” LaVarre added, “they got focused, and that focus never wavered. Proud of them. Very proud.”

Some four years ago LaVarre sat down with an eighth-grader named Danny Stevens. The young hockey player would enroll at either Glenbrook South or Loyola Academy. One of Stevens’ parents had asked LaVarre to talk to Danny about the Jesuit college prep high school in Wilmette.

“I told Danny all about the good things he’d experience academically at Loyola,” recalled LaVarre, a Glenbrook North graduate. “There’s a lot to like about what goes on there. Then I told him about the hockey program; I told him it was a pretty good one.”

“Our team’s heart and soul this season,” LaVarre said. “Got stronger, got quicker, and he grew considerably as a leader for us.

“My favorite memory involving Danny Stevens?” the coach said, repeating a question he had been asked to field. “Oh, I’d have to say the time he chose to attend Loyola Academy, not Glenbrook South.”

Stevens — who, from his hairline down to his chin, bears a resemblance to the Blackhawks’ steely-eyed defenseman, Duncan Keith — is considering the University of Colorado-Boulder, Xavier University and the University of Iowa for his next stop along the path of education/hockey.

For now, for the rest of his days at Loyola Academy, Stevens is a state hockey champion, the friendly young man with the throwback hairstyle, the young man you CAN’T miss in a crowd a people.

Or from a window seat in a plane flying high above that crowd of people.

“Danny’s hair, it’s got some serious volume, doesn’t it?” Liebers added. “He’s also a great hockey player and one of the nicest guys at school. You see him in the hallways at school, and he’s the guy smiling and saying hi to everybody.” 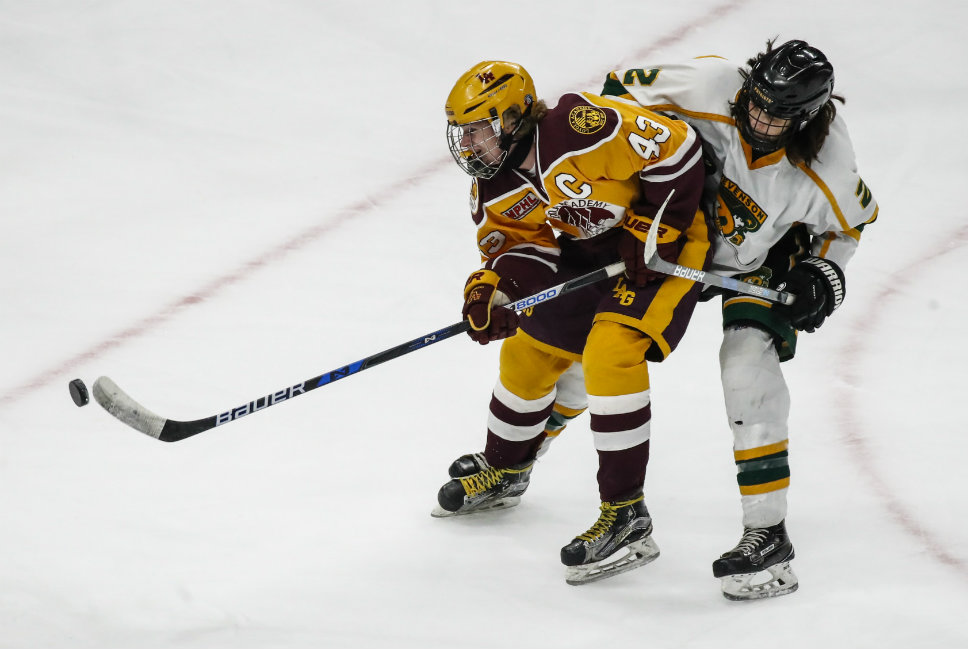 Danny Stevens attempts to the control the puck during the state championship game. PHOTOGRAPHY BY JOEL LERNER 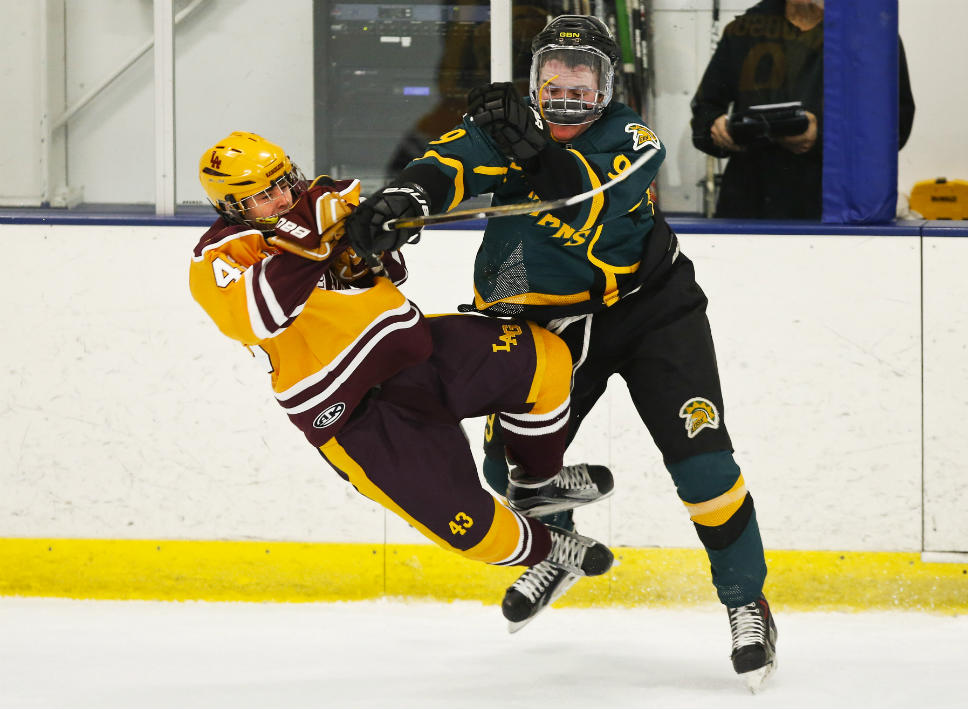