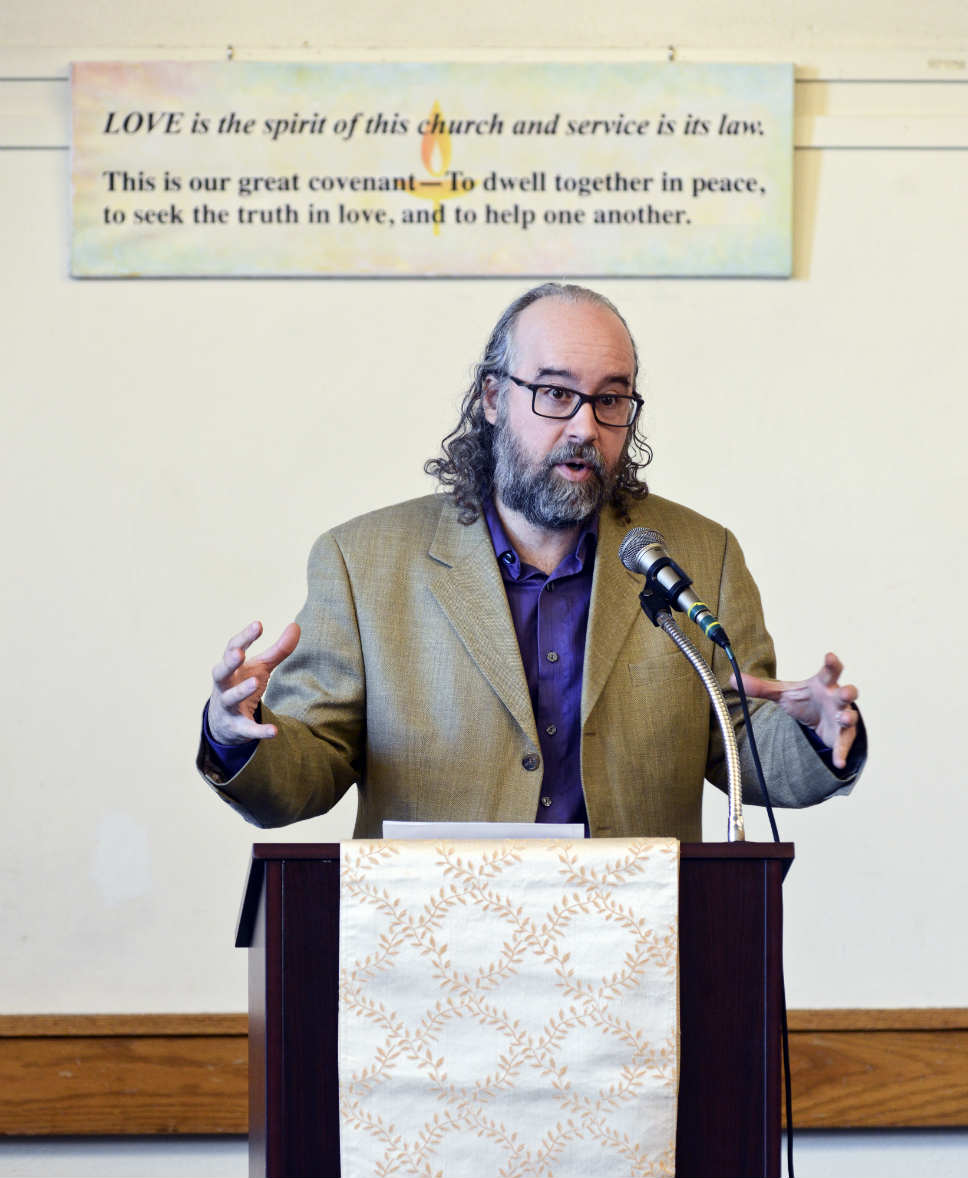 Dr. Benjamin Zeller speaks to the Lake Shore Unitarian Society about “The Religious Meaning of Foods” at the Winnetka Community House on March 25. PHOTOGRAPHY BY GEORGE PFOERTNER

Benjamin Zeller, an associate professor of religion at Lake Forest College, explored a timely topic during a lecture entitled, “The Religious Meaning of Food,” presented on March 25 to approximately 30 members of the Lake Shore Unitarian Society.

‘There are few things all religions share in common, and one of those things is food and eating,” said Zeller. “There is a nearly universal recognition in world religions that eating and food have high social, ritual and spiritual value.”

Zeller, who teaches a college course on the religious meaning of food, was a guest lecturer at the Lake Shore Unitarian Society’s weekly Sunday morning service at the Winnetka Community House. Instead of a traditional church sermon, the Society’s services feature academic presentations aimed at enhancing the congregation’s appreciation and awareness of the world. The Society’s 50-plus members come from diverse religious and cultural backgrounds.

During the course of his 30-minute lecture, Zeller shared insights into the historic context and meaning of food rituals practiced in Judaism, Hinduism and Christianity.

Modern Jewish kosher laws, outlining what animals can be eaten and mixed with other products, derive from ancient text contained in the Torah and the Old Testament’s Book of Leviticus (Chapter 11).

Cloven-hoofed cud chewers — including sheep, goats and cows — were permitted, but solid-hoofed or non-cud chewers like camels, pigs, and hare were forbidden. “Water beasts” with fins and scales fell under the permissible category, but mollusks like oysters and clams did not. Schooled fish were permissible; swarming fish were off limits. Insects that walk on four feet were a no-go; however, insects that hop, like grasshopper and locusts, were fair game.

Zeller dispelled the widespread notion that kosher laws protected ancient people from food that could be easily contaminated or spoiled.

“This code isn’t actually so much about eating and food as it is about holiness, and the essence of holiness is separation,” said Zeller. “In fact, the section of the text this comes from is called the ‘Holiness Code’. All of these rules establish Judaism — primarily through food — as being separate. Out of this comes an entire theology of Jews as the chosen people.”

In the Hindu religion, food is offered to the gods through a system of devotions. After the food is accepted, what’s left on the plate becomes prasad, or leftovers.

“In Hinduism, god consumes the spiritual dimension of the food and leaves the physical stuff for you,” said Zeller. “This becomes the heart of Hindu practice. If you visit a Hindu temple, one of the things they offer you is prasad. They’re offering you the grace of god in physical form. It’s the leftovers of god.”

Christianity, said Zeller, is unique among world religions because of it lacks a formal food code. According to Zeller, early Christianity avoided restrictive food laws as a way to differentiate itself from Judaism and appeal to the broader Greco-Roman population. Nonetheless, a sacred meal, known as The Last Supper, was at the heart of early Christianity.

For 1st Century Christians, said Zeller, the most important observance was the communal meal, a practice that’s documented in The New Testament’s Book of Acts, as well as archeological records.

“Christians got together and ate — like a communal potluck,” said Zeller. “Later, when Christianity went from an illicit religion to the official religion of the Roman Empire, that meal gradually shrunk over the course of 200-300 years until it became a tiny remnant, which today is the wafer and wine of communion.”

“My daughter has studied both the life of Buddha and the five pillars of Islam,” said Van Tassel. “I want her to learn about the world’s religions and make her own decisions.” 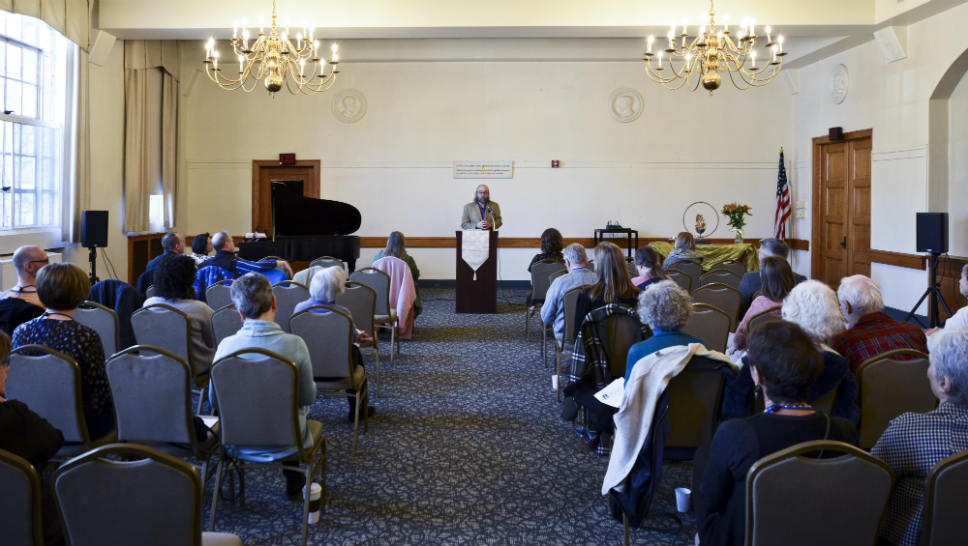 Dr. Benjamin Zeller speaks on “The Religious Meaning of Foods” at a gathering of the Lake Shore Unitarian Society at the Winnetka Community House. PHOTOGRAPHY BY GEORGE PFOERTNER 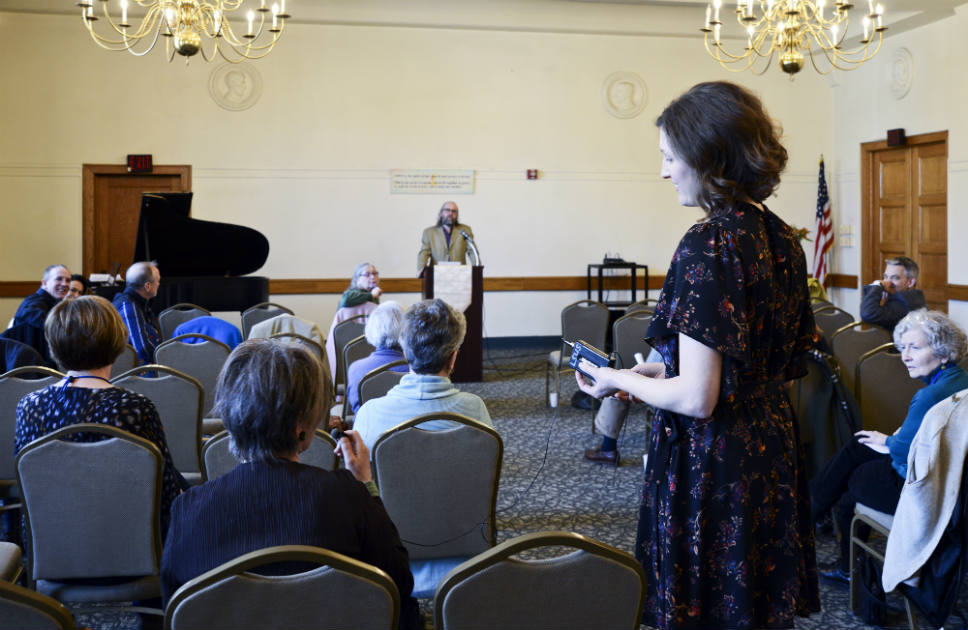 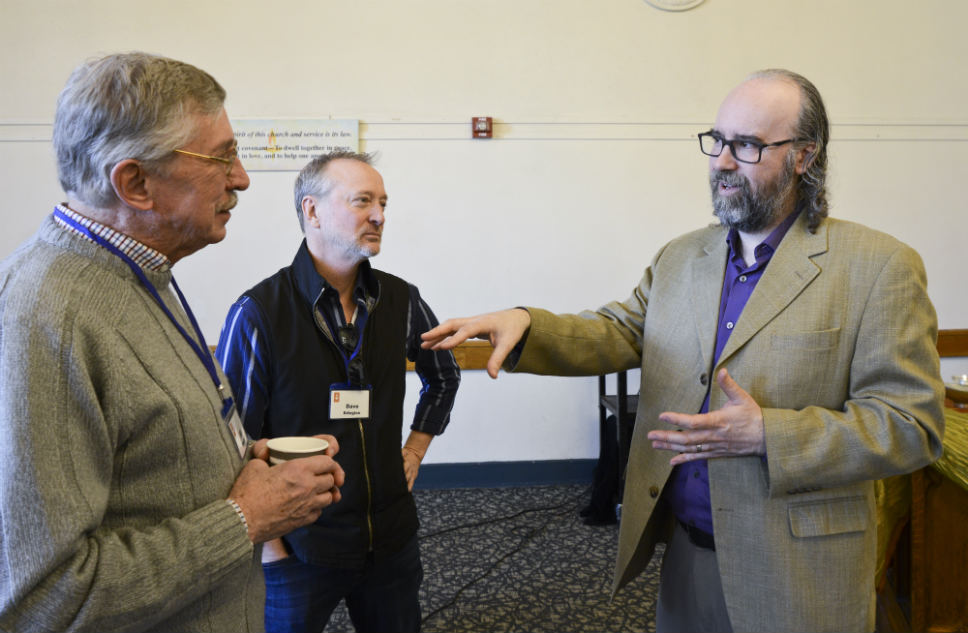