The three did a lot of things together in their youth, but fishing off Lake Bluff s Sunrise Beach had a special draw.

“When we got a fish on the hook we all had to bring it in together,” said Capps.

“It was less about the (strength of the) fish and more about doing it together,” added Nicholas.

Nicholas took it a step further when he restored the Lillian Dells pedestrian path as his Eagle Scout project, making it easier for people to walk to the lakefront. He can see his work while fishing.

Nicholas, Josephitis and Capps became the newest members of Lake Forest Boy Scout Troop 46 to earn Eagle Scout together during a Court of Honor March 10 at the First Presbyterian Church in Lake Forest.

The rank of Eagle Scout is the highest honor anyone participating in Boy Scouts can earn. While people do not remain Cub Scouts or Boy Scouts, they are always Eagle Scouts, according Richard Walther, retired scoutmaster.

Walther talked about the Eagle Project as he was presenting Nicholas, Josephitis and Capps with their Eagle Scout awards. He said it was a comprehensive service project for the community where they demonstrated organizational skills involving other Scouts.

In the case of Capps, Nicholas and Josephitis, they helped out with each other’s projects as well as recruiting others in the troop to assist. While Nicholas said there was a lot of physical labor getting the path restored, he also had to find a way to pay for the materials.

“I needed the money to pay for 17 tons of asphalt,” said Nicholas. “I knew my friends would help with the labor.” 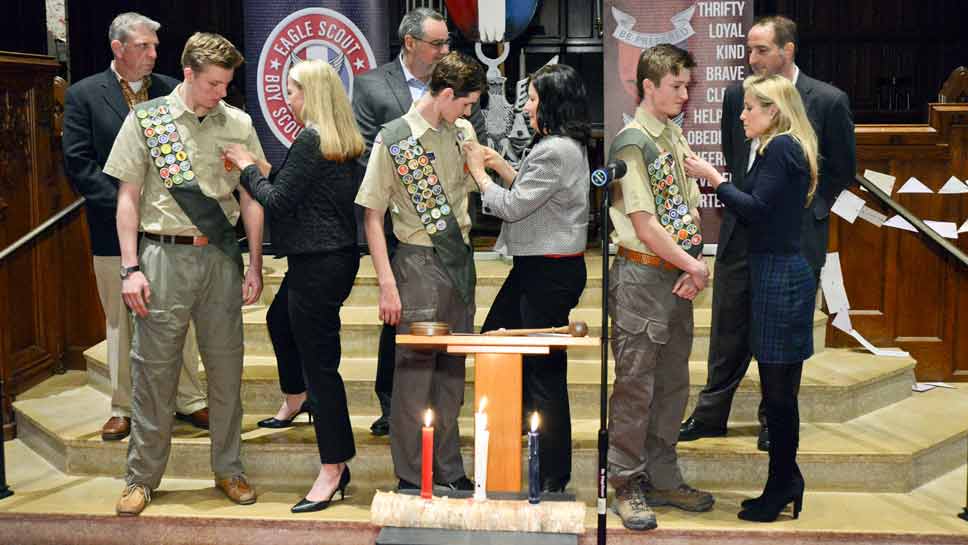 Mothers of the three Eagle Scout candidates, from left, Charlie Capps, Andre Josephitis, and Tyler Nichols, place an award pin onto their shirt as their fathers stand in wait. PHOTOGRAPHY BY GEORGE PFOERTNER/JWC MEDIA 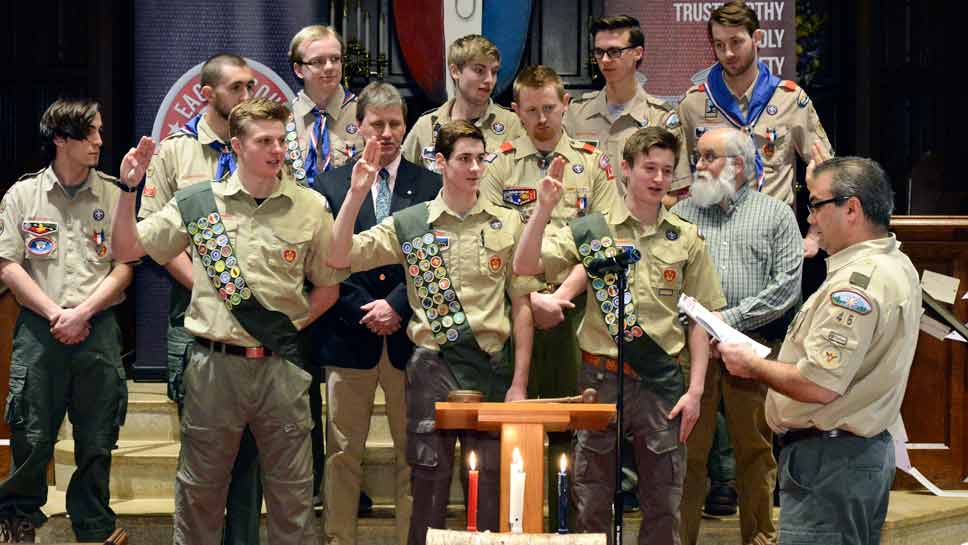 Assistant Scoutmaster Eric Bower, far right, recites The Eagle Challenge to the candidates for Eagle Scout. The three with their raised hands, from left, are Charlie Capps, Andre Josephitis and Tyler Nichols. They are joined by all attending Eagle Scouts. PHOTOGRAPHY BY GEORGE PFOERTNER/JWC MEDIA 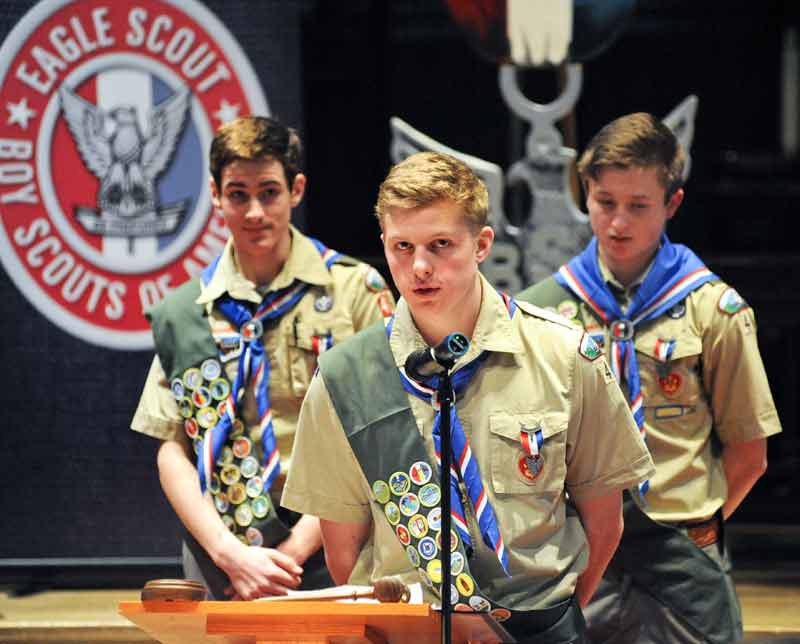 Nicholas got in touch with Lake Bluff-based Peter Baker & Son, and the company donated the material. From there it was a matter of planning the work, getting the needed help from other Scouts and completing the task.

Josephitis organized and oversaw construction of a boardwalk leading to a viewing platform at the Carolyn Goetz Wetlands Preserve, which is one of the Lake Bluff Open Lands Association properties. He met with officials of the association and the village to get his plans approved. He too needed funding, tools and help with the work.

“Tyler (Nicholas) worked with me a ton,” said Josephitis. “I had to engineer it and make sure it was going to work. Open Lands was a big help.”

Capps got high tech with his Eagle Scout project. He learned from people at the Lake Bluff Park District there was a concern about losing track of the memorial plaques throughout the village’s parks. There are more than 80. Capps undertook the task of finding all of them and cataloguing each one.

“I went around to all the parks in Lake Bluff finding them and mapping them,” said Capps.

When Capps, Nicholas and Josephitis were in third grade, they were in both the same class and same Cub Scout den. They clicked as friends and their bond continued to grow.

“We advanced through it all together,” said Capps.

“In middle school we really started doing a lot of things together,” added Nicholas.

Though all three Eagle Scouts got their pins, bandanas and other accolades at the same Court of Honor, Nicholas was the first to achieve the rank on June 5. Not only did he achieve six previous ranks on the way to the top starting in 2011, he held leadership positions. He was an instructor, assistant patrol leader, patrol leader and chaplain aid.

Capps advanced at a similar pace completing his Eagle Scout requirements October 7. He too was a chaplain aid, patrol leader and instructor. He was also the leader of the flower sale.

Josephitis finished his Eagle Scout requirements December 2. Along with also serving as a patrol leader and assistant patrol leader, he was a safety instructor and troop guide.