LAKE FOREST — A unified front is emerging between Lake Forest officials and a citizens group to prevent an approximate three-mile long holding track for freight trains starting just north of the west side Metra station and extending to Highway 176.

The Lake Forest City Council unanimously authorized creation of a resolution clearly stating the city’s reasoning for its opposition to the holding track March 19 at City Hall in the face of a pending decision by the Federal Railroad Administration which could approve the project.

Alderman Melanie Rummel said the holding track, which will allow slower freights to park while faster passenger trains pass, will have a negative impact on the community. While the city has opposed the proposal since October, 2016, she said more action and effort is necessary.

“We as a council must unite with our fellow citizens to oppose the building of a third rail through Lake Forest in the most effective way possible,” said Rummel. “I would like to ask the staff to prepare a restated resolution and reaffirmation resolution.”

Rummel expressed the hope the resolution will be prepared for discussion when the council meets at 6:30 p.m. April 2 at City Hall.

The controversy has its roots in a proposal nearly four years old which would add three daily Amtrak Hiawatha round trips between Chicago and Milwaukee, according to a September 30, 2016, DailyNorthShore.com story.

The FRA issued an environmental assessment in October, 2016, suggesting both the holding track in Lake Forest and another spanning Glenview and Northbrook between West Lake Avenue and Techny Road.

Residents and officials are awaiting a revised environmental assessment which they hope will alleviate their concerns. The city, along with the villages of Glenview, Northbrook, Deerfield and Bannockburn, has asked for an environmental impact study which is much more detailed than an assessment.

Both Rep. Brad Schneider (D-Deerfield) and Rep. Jan Schakowsky (D-Evanston) have asked the FRA for a freight impact study as well, according to a November 21 DNS story.

Though Lake Forest has expressed its opposition to the holding track in a number of ways, a group of residents organized as Citizens for ACTION has sought more effort from the city. Rummel suggested ways she hopes that can be achieved through the new resolution. 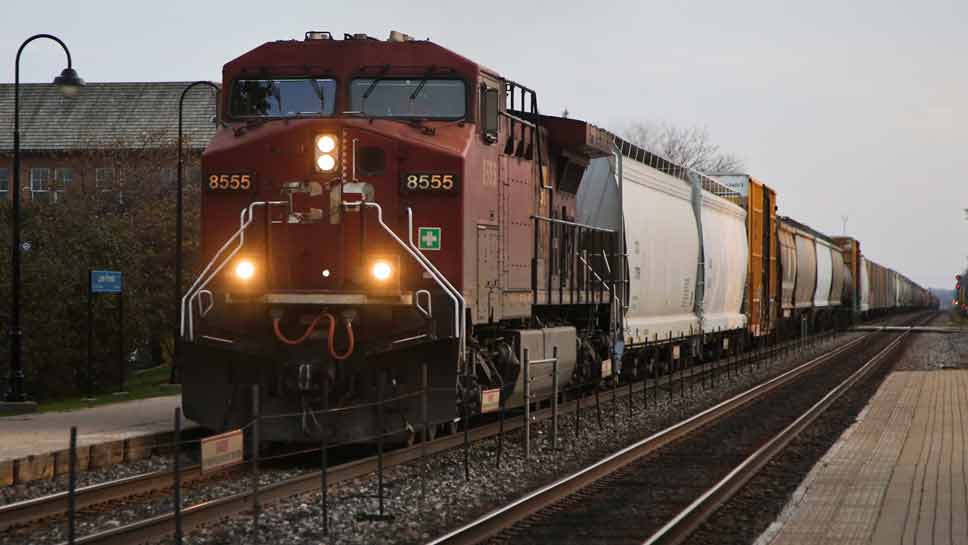 A freight train rolls into the west side depot in Lake Forest. PHOTOGRAPHY BY JOEL LERNER/JWC MEDIA

Rummel said she wants the new resolution to communicate in a “clear and unambiguous” manner the city’s opposition to the holding track including the harm it could cause residents of Lake Forest. She wants it to include the importance of an environmental impact study and a demand for a freight impact study.

“It will include … the city’s strong belief that (the holding track) will create unacceptable health, safety and environmental impacts on our community,” said Rummel.

Rummel said she attended a meeting in Glenview on the subject March 12 along with Aldermen Prue Beidler, Raymond Buschmann and Michelle Moreno. Rummel said she was impressed with the unity of the Glenview community and discussed with Beidler on the way home how they could create the same harmony in Lake Forest.

Also speaking and lending support were Joanne Desmond of Lake Forest who is one of the organizers of Citizens for ACTION, Schakowsky and Schneider.

“What struck us was the clear alignment and working relationship between the Village of Glenview and its residents on this matter,” said Rummel. “We’re trying to reconcile why the appearance in Lake Forest is that this city council is not equally opposed to this third rail and equally supportive of our residents.”

After making that statement, Rummel proposed the creation of a resolution clearly demonstrating the city’s position in strong opposition to the holding track. The message was not lost on Desmond and Tom Scarsfield, who both spoke at the meeting.

Desmond has expressed criticism at past council meetings about the level of commitment to opposition of the third rail by city officials. She has asked for more involvement citing specific health and safety issues.

“I’m overwhelmed first of all by your comments and am very proud to be part of this city again,” said Desmond. “We pledge to work with you in concert. It means a lot.”

Scarsfield, who said he attended the meeting in Glenview, felt Lake Forest was opposed to the third rail but not fully committed to fighting it.

“Alderman Rummel I can’t tell you how much I appreciate what you said here tonight,” said Scarsfield. It’s something has needed to be said for quite some time. If we can do a lot of the things you talked about tonight I think we’ll ease over into that area of commitment.”