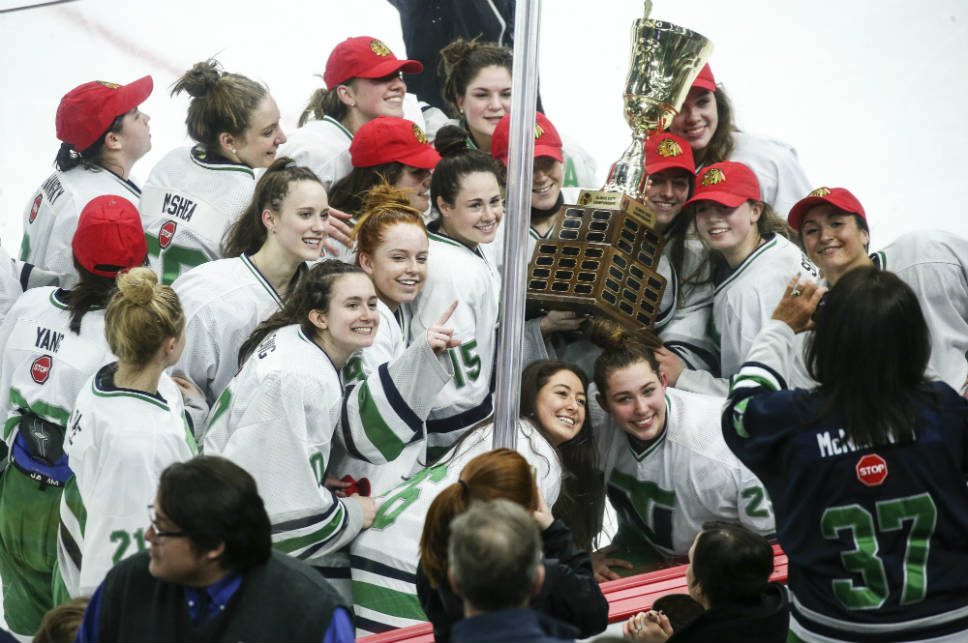 Sophomore Julia Laden notched her 13th goal the year one minute and 41 seconds later, and junior defenseman Maddie Babnik upped the advantage to 3-0 on a power play with her 13th goal of the 2017-18 season at the 5:58 mark of the period.

Junior goaltender Abbey Wieczorek made the fast start hold up, stopping four breakaway-shot attempts en route to improving her record to 4-1-1. Also a goalie with AAA team Chicago Mission in the winter, Wieczorek had played 21 games as a forward for her high school team, scoring six goals and providing four assists for top-seeded New Trier (21-5-1).

And so did Abbey on Saturday, even though the roster listed her with a No. 22 next to her name. The championship game MVP did not just match Hayden’s feat and his number; little sister wore the actual jersey her brother — now a senior — had donned for the boys state championship game in 2017.

Each NT girls player earned the right to wear a red state championship cap following the victory on the Chicago Blackhawks’ home ice.

New Trier’s state title was its first since 2014 and third in seven years.

Glenbrook South (16-7-3) had a good chance to score its first goal twice in the final 1:45 of the first period. Junior forward Lily Cataldo delivered a fine centering pass on a threatening rush, before Wieczorek gloved a snappy breakaway shot attempt by senior forward Hannah Jensen with 14 seconds left in the session.

Third-seeded GBS got on the board at 9:56 of the second period, thanks to junior defenseman Maddie Dunham’s shorthanded goal on an assist from Jensen.

But NT sophomore forward Mae Olshansky returned the gap to three goals only 1:22 later. Sophomore defenseman Claire VanDamme got credit for the assist on Olshansky’s team-high 34th goal of the season.

McLaughlin capped the scoring with her second goal of the game and 13th of the season at 4:30 of the third period.

NT sophomore forward Sophia Ewing ended up with two assists; Olshansky, Babnik and junior defenseman Addie Budington each had an assist for the champs. 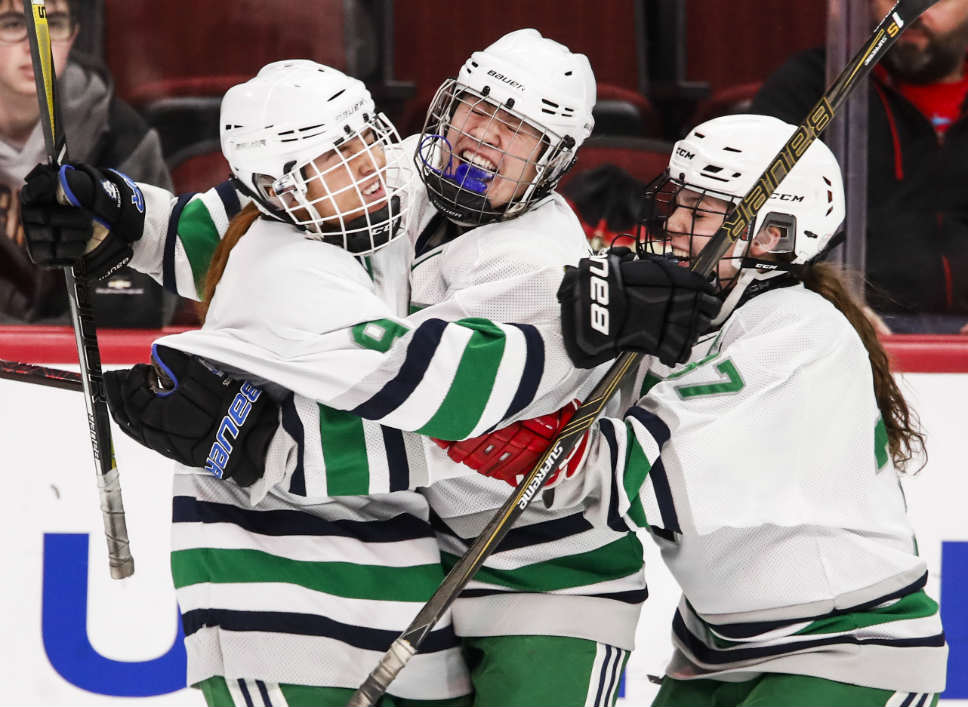 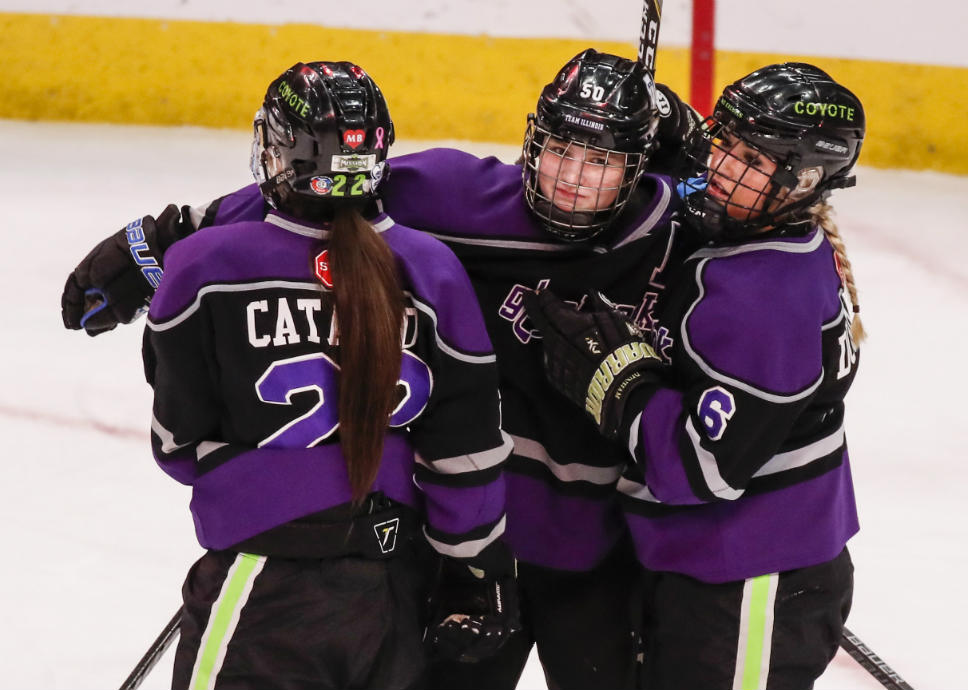 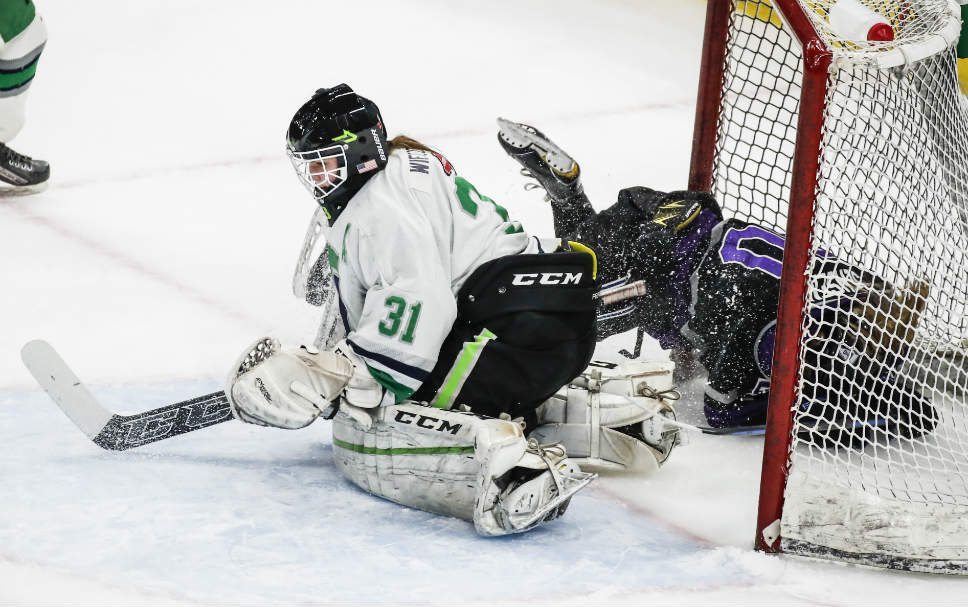 Glenbrook South’s Hannah Jensen crashes into the net while New Trier’s Abbey Wieczorek makes a save. PHOTOGRAPHY BY JOEL LERNER 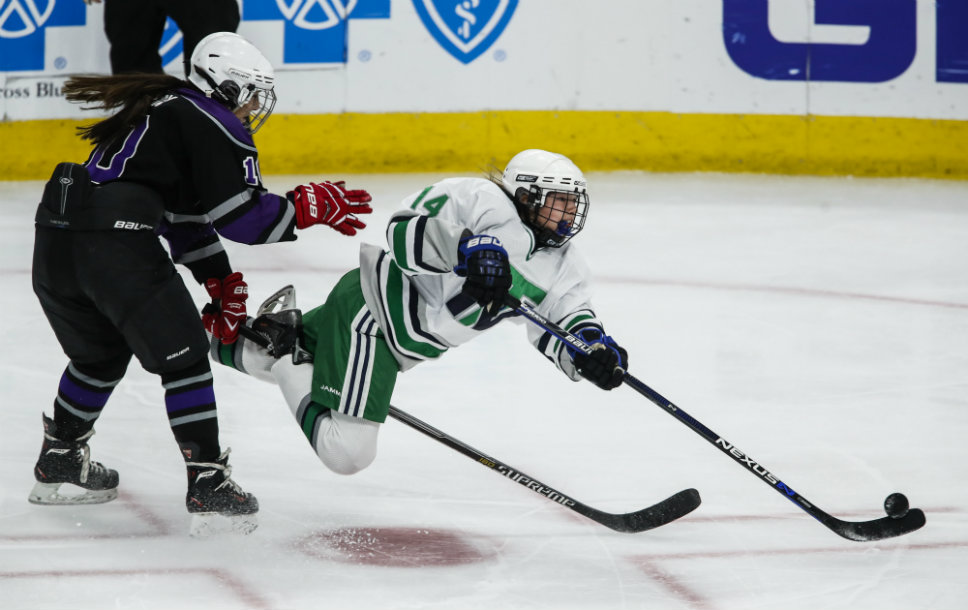 NT’s Serena Seiple fires up a shot while being tripped by Glenbrook South’s Koby Wilcox. PHOTOGRAPHY BY JOEL LERNER 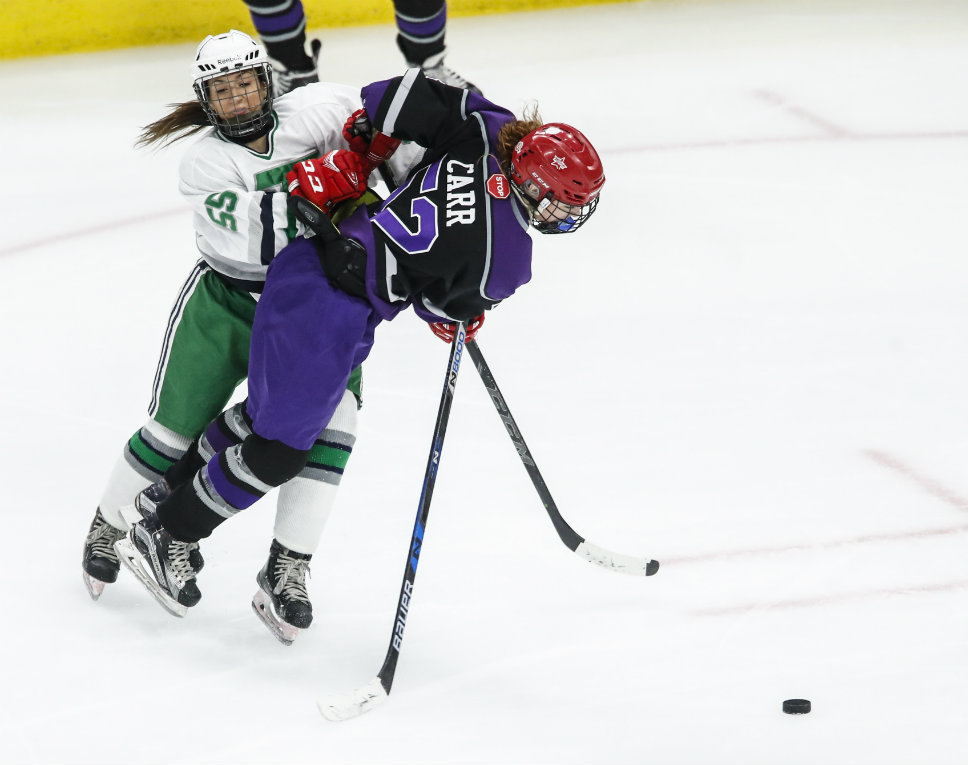 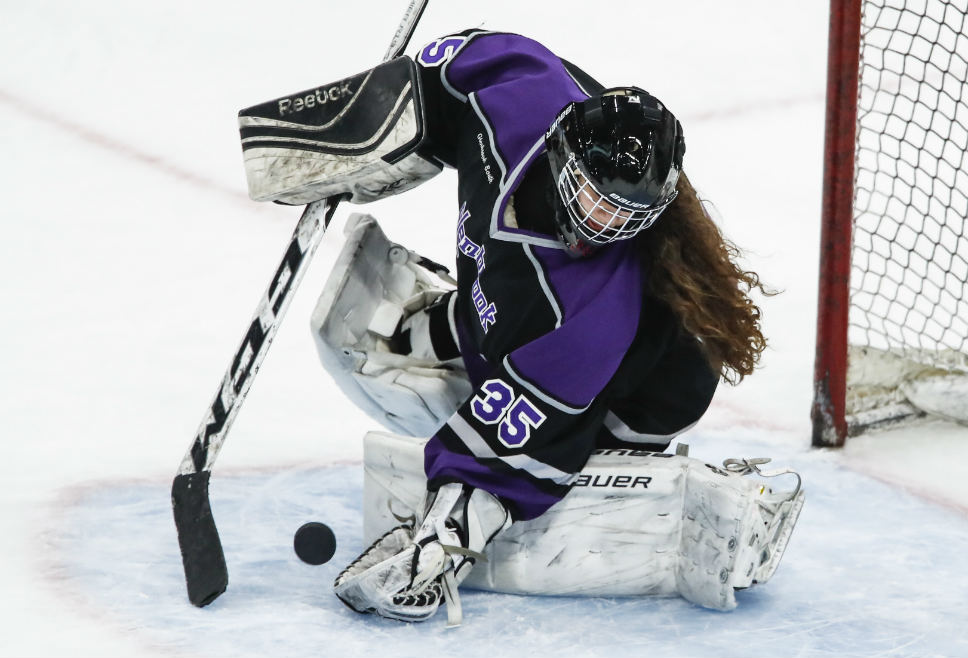 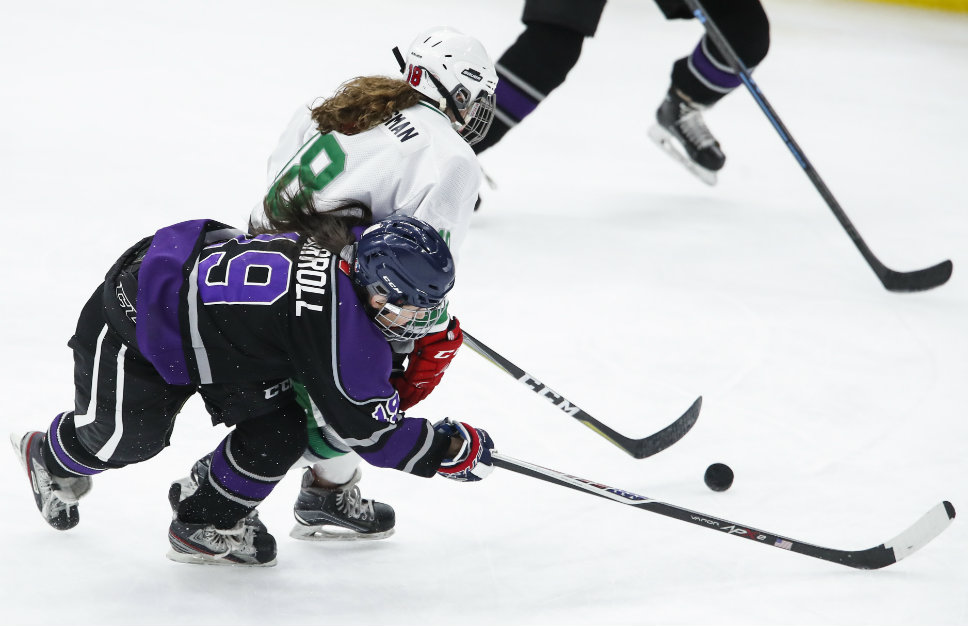 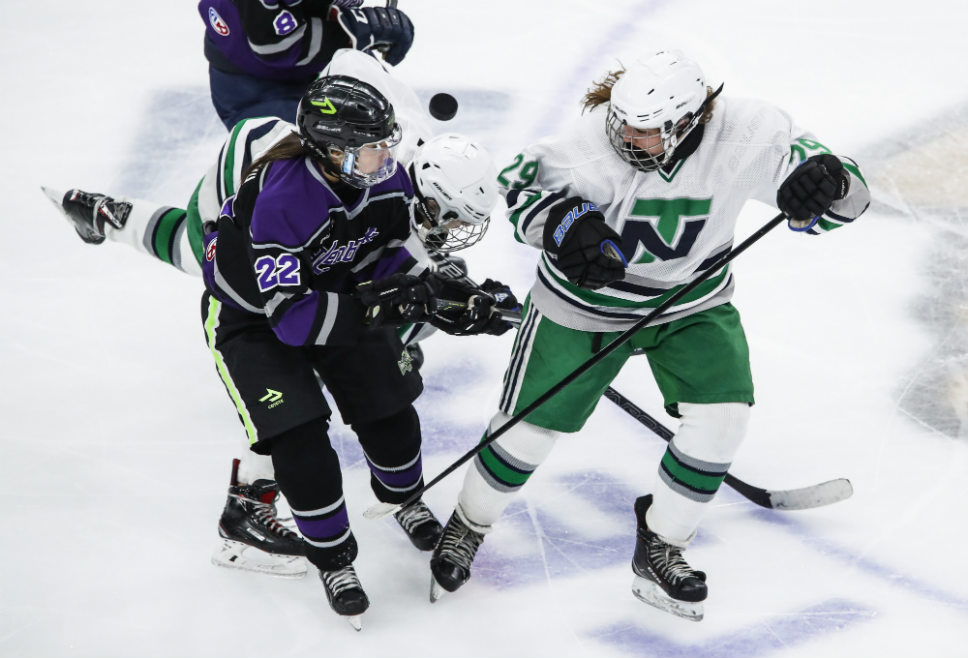 Glenbrook South’s Lily Cataldo (No. 22) fights for the puck against a couple of New Trier players, including Julia Laden (No. 29). PHOTOGRAPHY BY JOEL LERNER 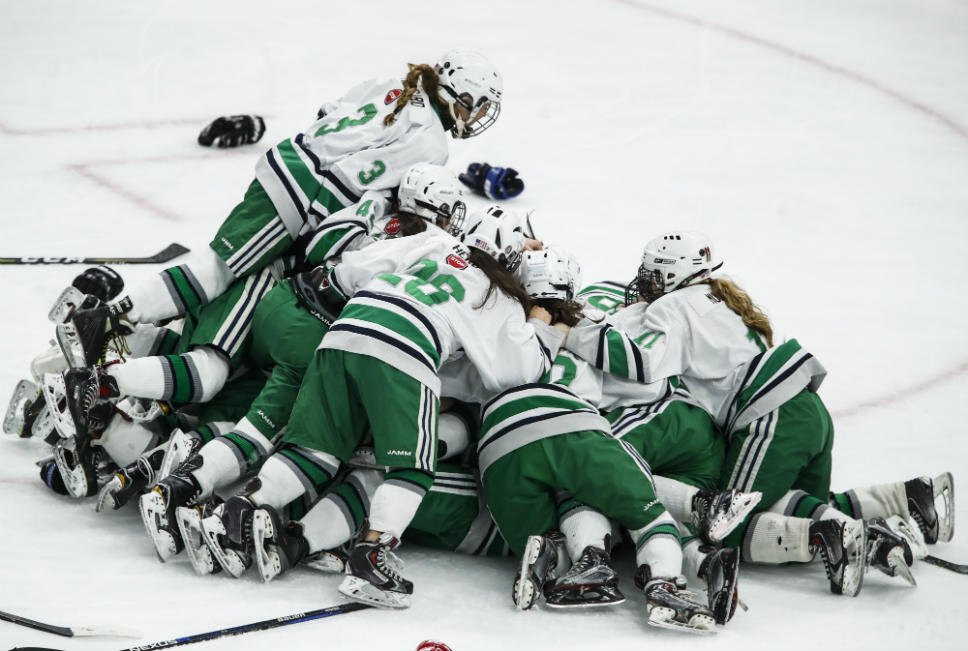 Members of the New Trier team pile on their goalie after winning the state title. PHOTOGRAPHY BY JOEL LERNER 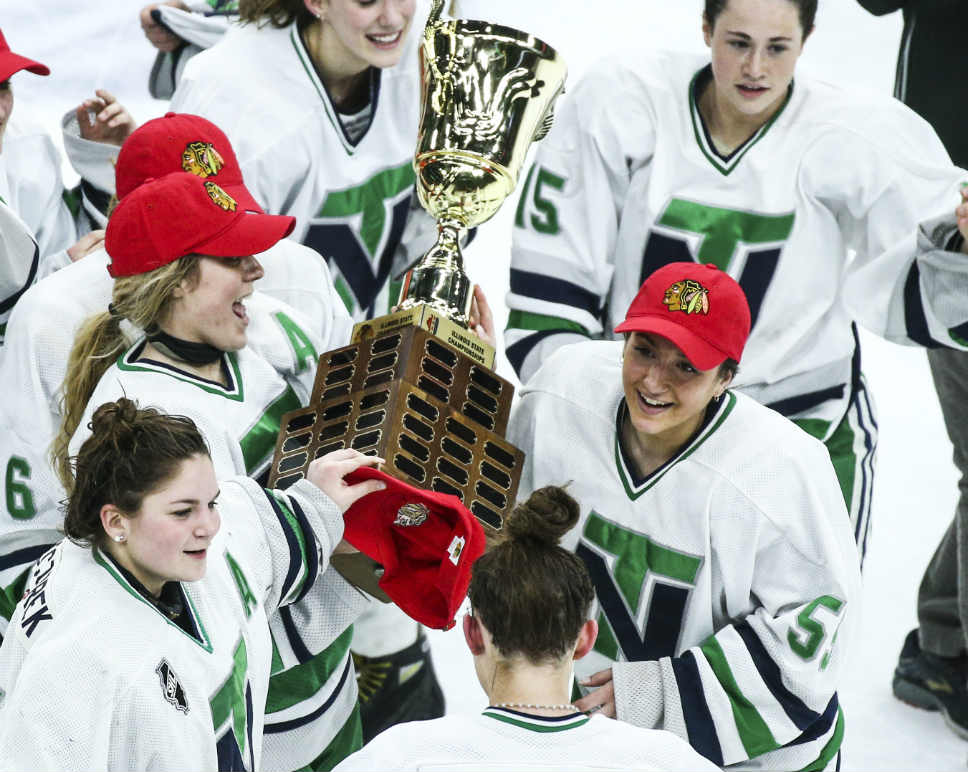