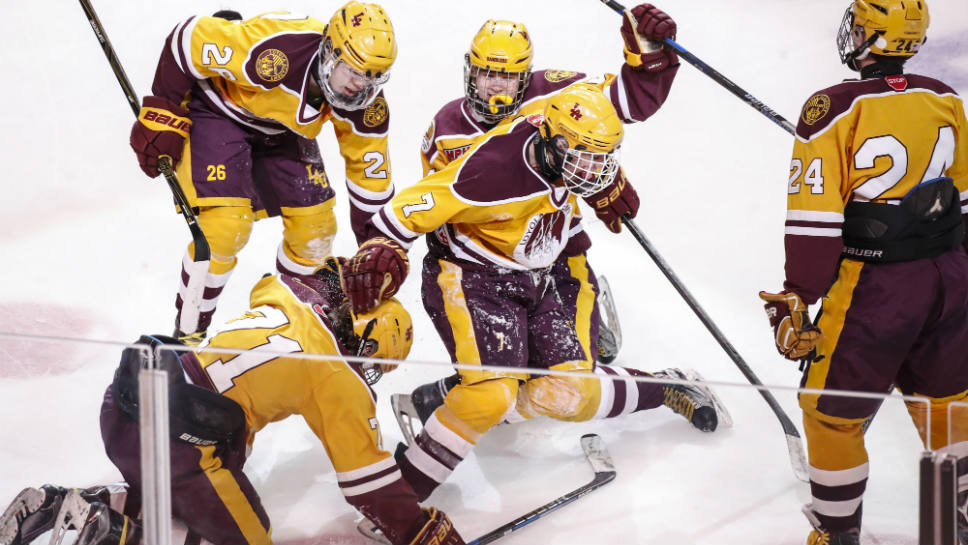 Loyola Gold’s Timmy Hackett (No. 7) reacts after scoring an empty netter late in the game. PHOTOGRAPHY BY JOEL LERNER

Moments after zipping in an empty netter — a few feet in back of the Loyola Gold blue line — Timmy Hackett dropped to his knees, slid past the giant Chicago Blackhawks logo and started pounding both of his fists on the ice.

They had done it.

For the first time in 22 years, the Ramblers celebrated a state championship in boys hockey, beating a stellar Stevenson team 4-2 in the title game on March 24 at United Center.

“I got pretty excited,” said Hackett, of his rather extravagant and spontaneous celebration. “I just went nuts.

“It was an unbelievable moment,” added the junior all-stater, who will play college lacrosse at Bryant University in Rhode Island. “A once-in-a-lifetime opportunity.”

Hackett didn’t score the biggest goal of the night. That one belonged to Nick Liebers. The junior defenseman, assisted by Eamon O’Brien, put the Ramblers ahead 3-2 with 4:15 left to play in the third period, when his long shot from just inside the blue line deflected — ever so slightly — off the stick of Stevenson defenseman Sam Shellist and whistled into the net.

“Having the puck tip off his stick stinks for him,” said Liebers. “But it was good for us.”

“There was a lot of traffic around the net,” he added. “Guys were scurrying all around. You don’t necessarily want a clean goal right there. Scoring dirty goals is how you win games.”

For LA Gold fans — and a ton of them were watching — his “dirty goal” was a thing of beauty and brilliance.

Scoring against Stevenson all-state goalie Elias Sandholm is not an easy undertaking.

“I thought we peppered him pretty good in the first 10 minutes of the game,” said LA Gold head coach DJ LaVarre.

LA Gold eventually broke through, when junior all-stater Aidan Finegan zipped a left-handed wrister into the net with 5:53 remaining in the first period. Christian Dunne and O’Brien were credited with assists.

Soon after Finegan’s score — his 24th tally of the season — the game shifted Stevenson’s way. The Patriots moved ahead 2-1, when their star forward, Jackson Leptich, struck twice. He picked up his 74th goal of the season just seconds after a faceoff late in the first period. Then, with 9:58 left in the second period, he came up with 75th goal after flying down the ice and scoring off his own rebound.

Less than three minutes later, the two teams got back to even (2-2), when Declan Darcy punched in a goal. Danny Stevens got the assist.

Meanwhile, the last part of the second period and early portion of the third period didn’t look so good for LA Gold (53-10-2), which had lost to Stevenson (55-18-2) twice during the regular season.

In fact, things looked downright dicey for the Ramblers, when Stevenson opened the third quarter with a power play and sent a flurry of laser shots at LA Gold goalie Hugh Brady.

Brady, however, didn’t blink. In a span of 65 seconds, the senior all-stater turned away three hard shots.

“Those saves by Hugh right then were confidence boosters,” said Hackett. “It got us going. Who knows what would have happened had he not made those [three] saves.”

“I’d say that the fans got their money’s worth watching those two goalies,” said LaVarre. “They’re all-state goalies for a reason.

“I’m real happy with our guy,” he added.

And, as expected, the veteran LA Gold coach, who guided the Ramblers to a state title in 1996, was ecstatic with the win. LA Gold had entered Saturday’s game with an 0-7 mark in the program’s previous seven appearances in the state championship game.

“We’ve had way too many second-place finishes,” said LaVarre.

This year’s Ramblers knew what was at stake. They were reminded often.

“Coach kept telling us, ‘Twenty-two years, boys, 22 years,’ ” said Hackett. “It was plastered in our head.” 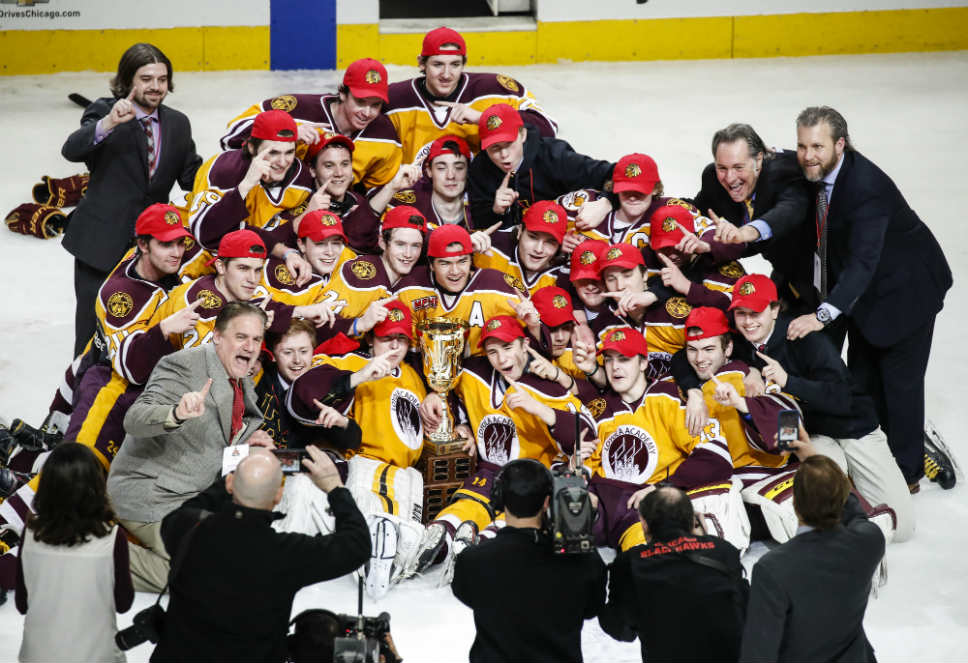 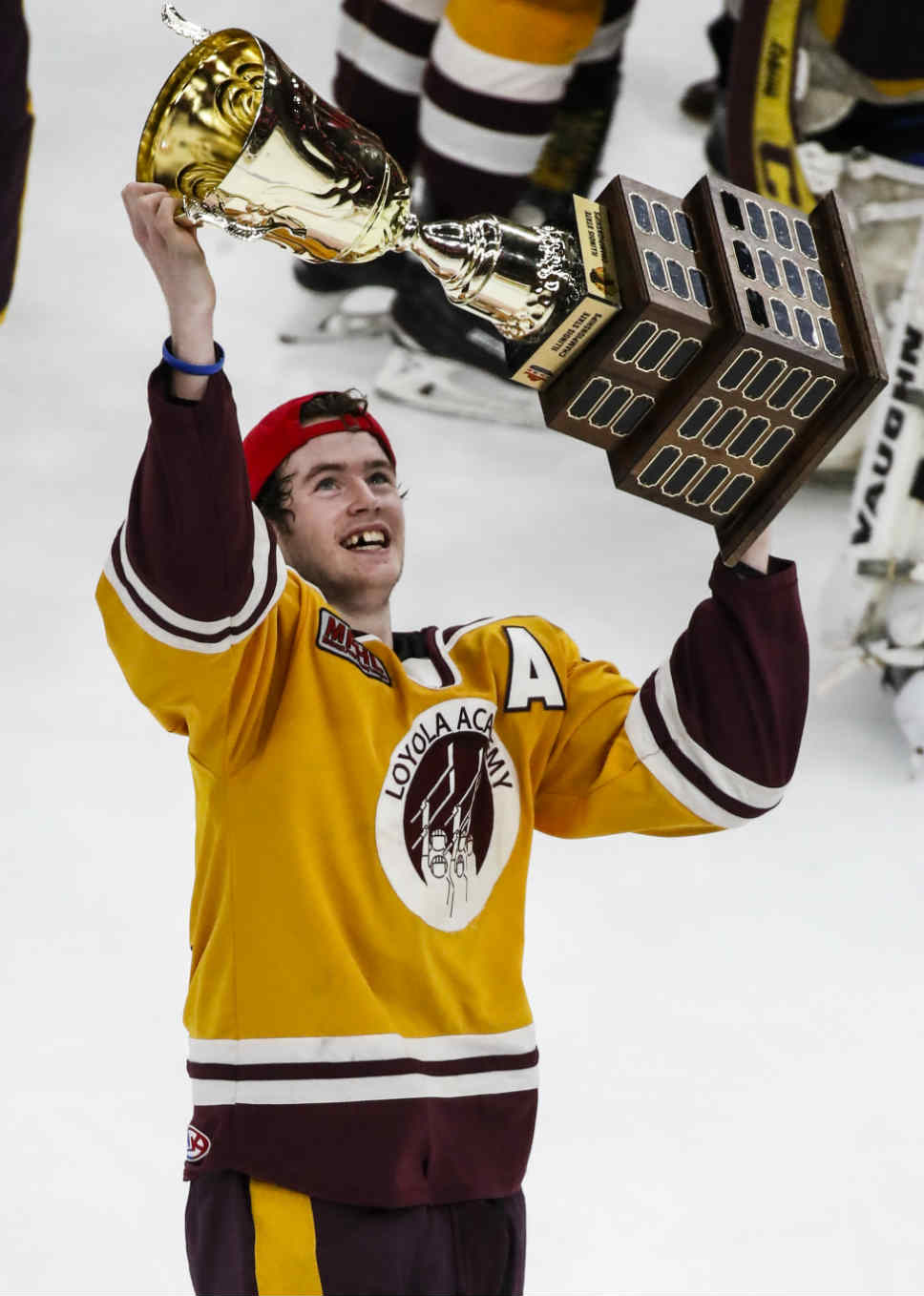 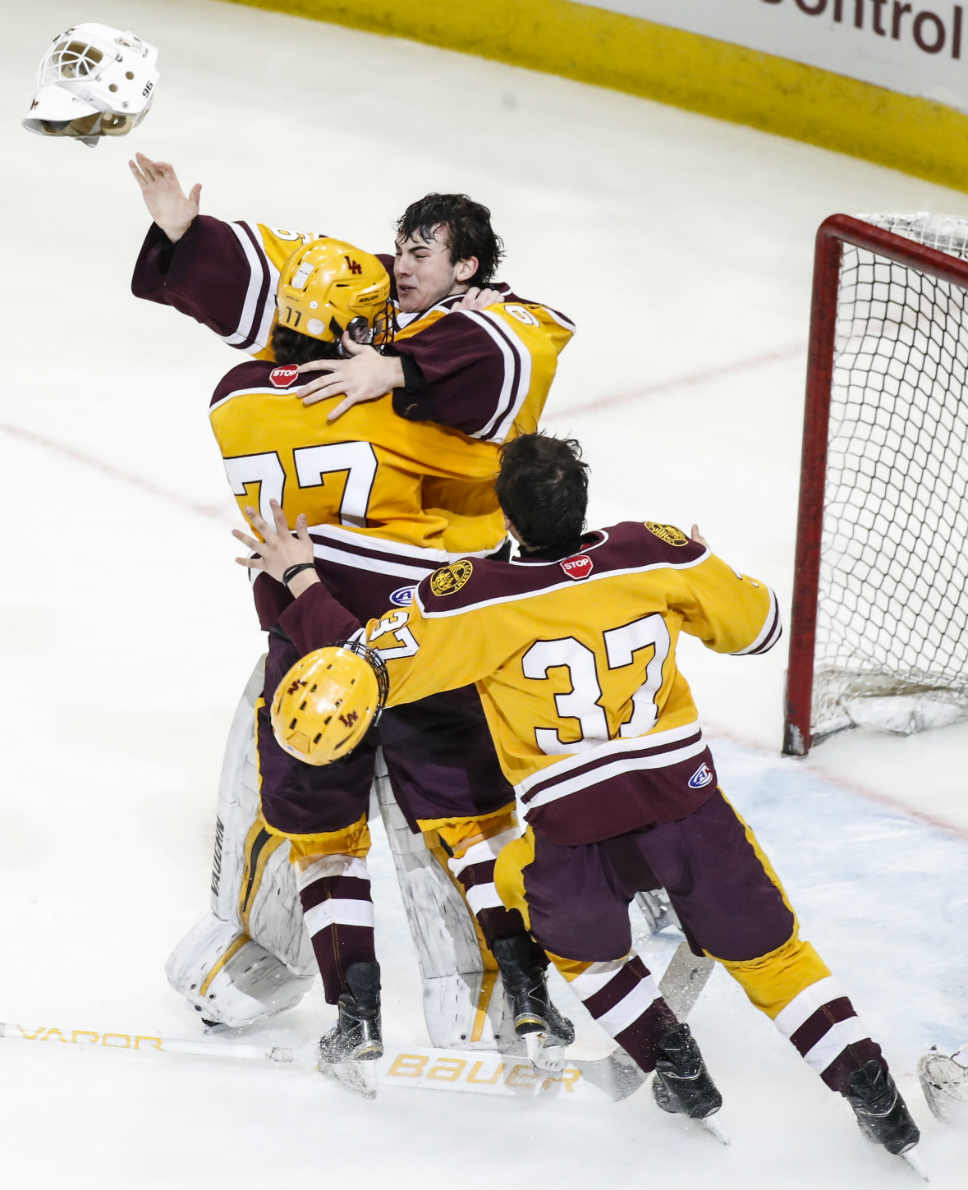 LA Gold goaltender Hugh Brady tosses up his helmet as he receives hugs from Jack McKerr (No. 77) and Aidan Finegan. PHOTOGRAPHY BY JOEL LERNER 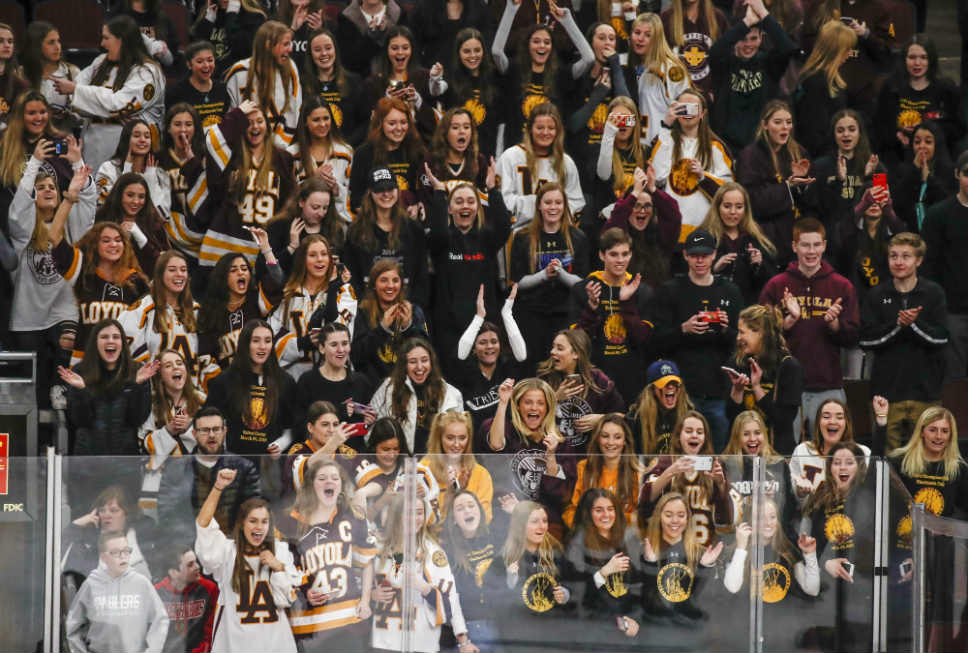 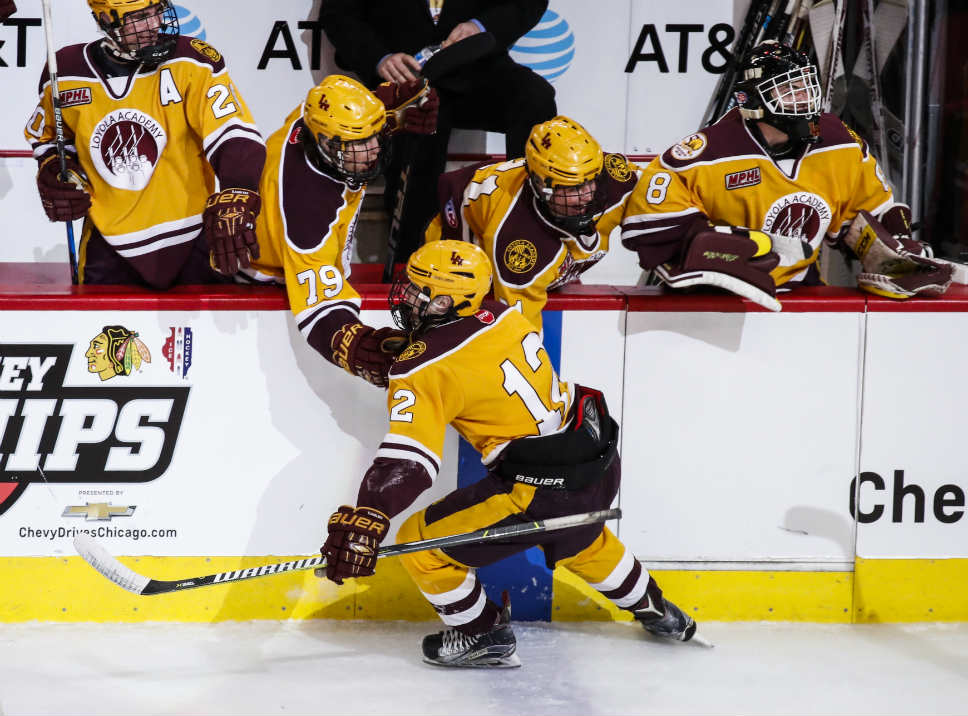 LA Gold’s Declan Darcy races to his bench after scoring a goal in the second period. PHOTOGRAPHY BY JOEL LERNER 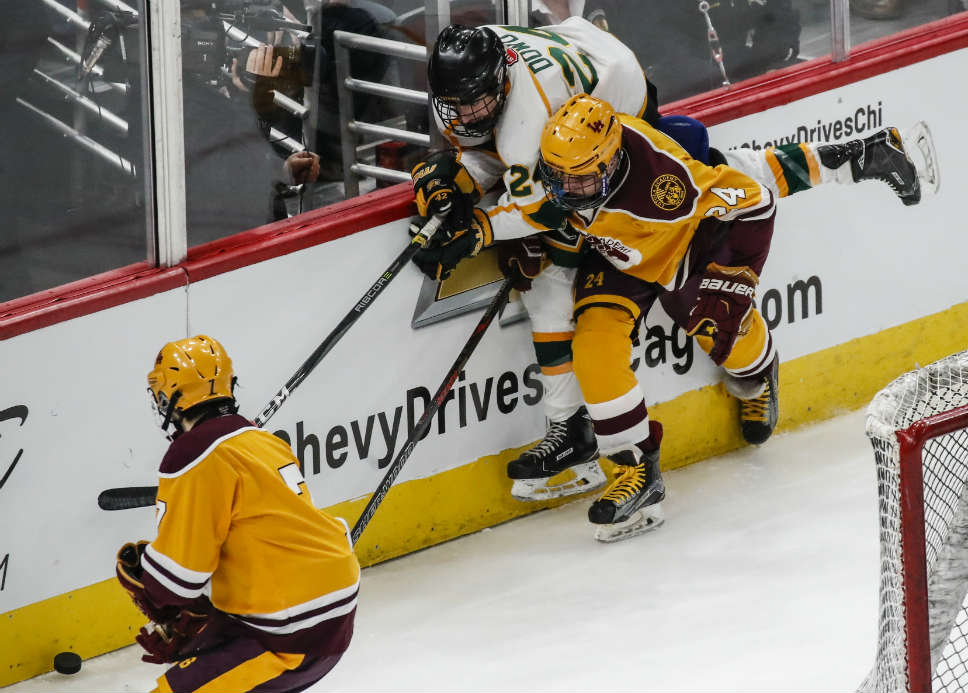 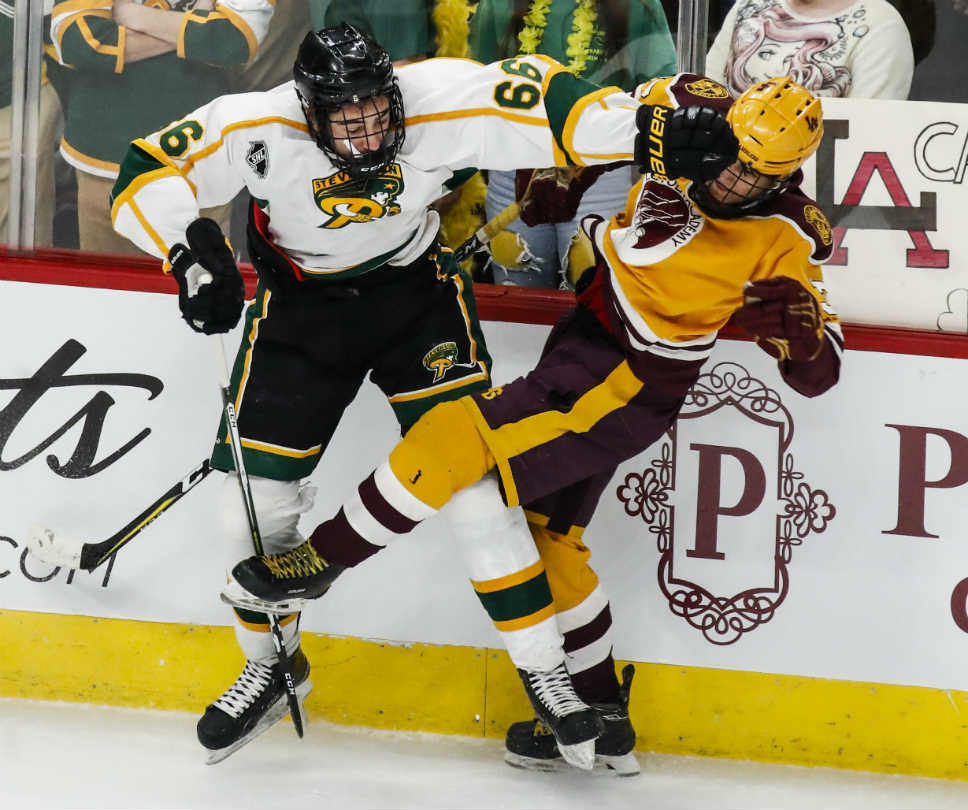 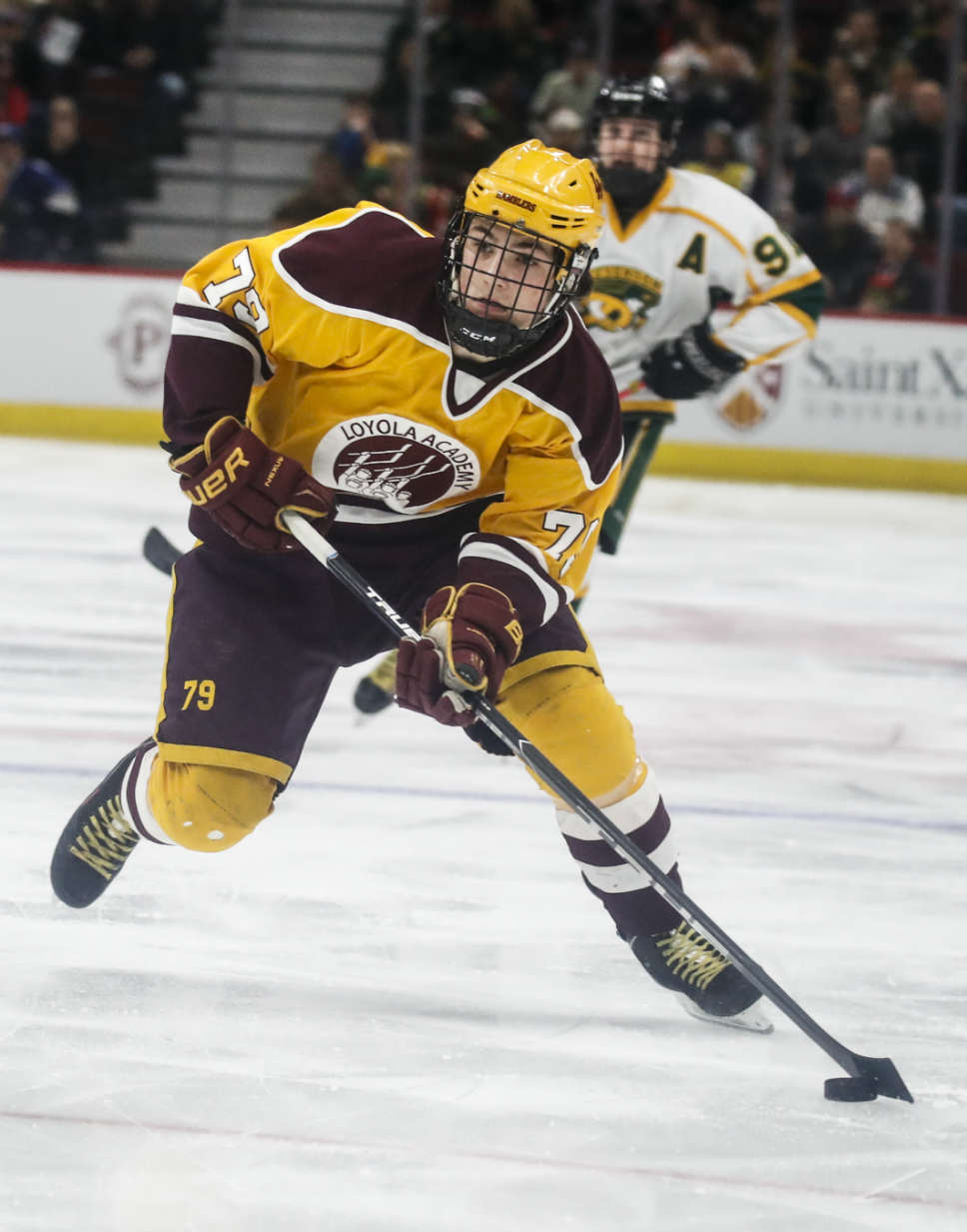