Stephanie Rogers had tinnitus when she attended her first live-literature show in Chicago several years ago. Performers stood before Rogers and other audience members and told stories — engaging ones, irreverent ones, entertaining ones.

Think of a cross between a poetry slam and a series of stand-up comedy gigs.

“The live-lit scene in Chicago is huge now, after gaining steam in the last six to eight years around here, after beginning in New York about 20 years ago,” says Rogers, a bandleader who sang at North Shore weddings and fundraisers in her 30s, acted with Chuck Norris in a 1998 TV movie and appeared in McDonald’s, beer and car commercials.

“I was at that live-lit show, in part, because of my dumb ear thing, and I thoroughly enjoyed the storytellers,” the Wilmette resident adds. “But it was missing something. It was missing music.”

Rogers’ tinnitus failed to ring the creativity out of her. The daughter of a filmmaker (Gerry) and a model/ballerina/actress (Karen), Rogers founded Story Jam in 2015 and continues to serve as its producer and songwriter. Rogers hires well-known storytellers and writes songs for each story, and her 10-piece band performs the music at Story Jam shows. 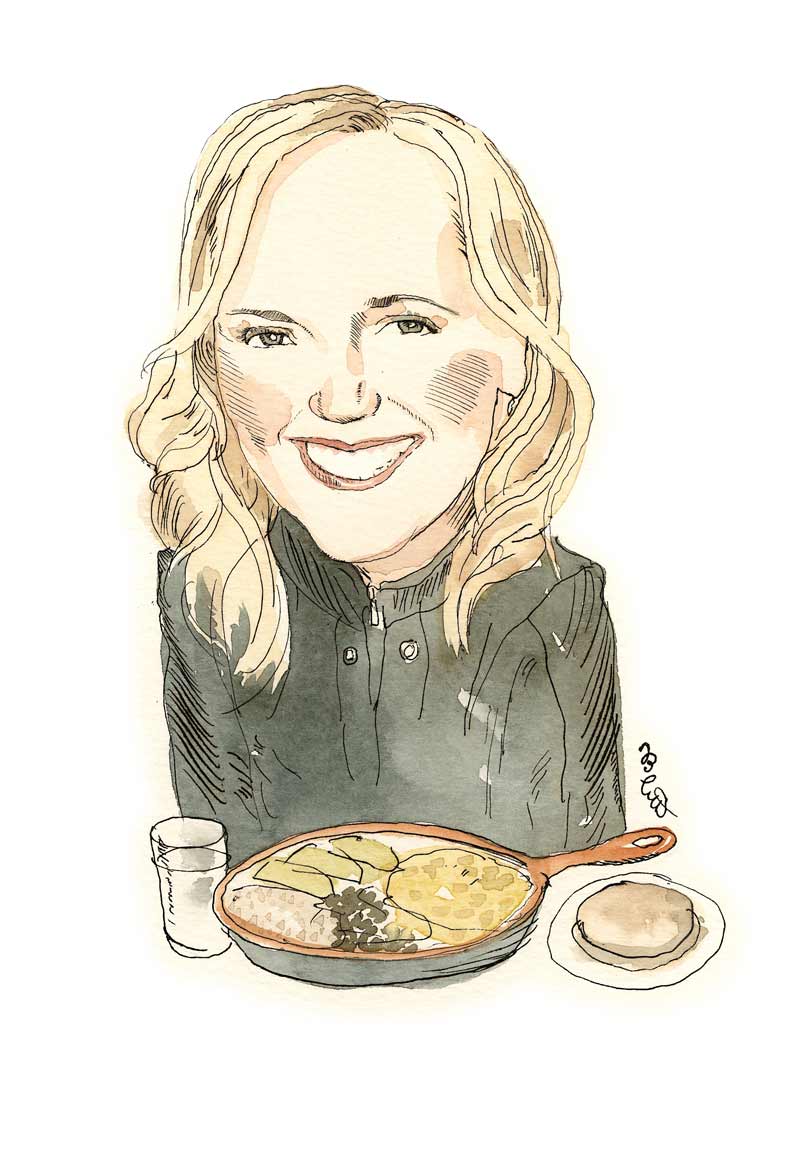 Story Jam has captivated audiences with its bi-monthly shows. The troupe performs at three venues: City Winery in Chicago; The Wilmette Theatre; and Artifact Events in Chicago’s Ravenswood neighborhood.

“My ears are making a comeback,” Rogers, a thyroid cancer survivor, says after ordering a skillet (scrambled eggs, quinoa, avocado, onions and black beans) and an English muffin, along with a glass of water, at Egg Harbor Café in Glenview, now the hometown of her parents. “I’m thinking about creating and producing a Story Jam rock musical someday; that would be fun. I was a rocker in a band once, with big hair and weird outfits. I’m now working on my master’s degree in written communication at National Louis University [Skokie campus], because I want to become a better writer and editor for Story Jam.”

A former female gang member in East Humboldt Park performed as a storyteller in a Story Jam show. A man in another show regaled an audience with his memories of growing up as the son of scientists, who wanted their son to become a scientist and thought he did, too, all because they caught him looking at the stars at night.

“I like shows with diversity,” Rogers says. “The more diversity, the better. I see connections at shows; we’re all the same. I want people to feel inspired, energized, during our shows. I want them to feel something, to think, to be slightly changed by the experience. Story Jam shows also lift me and change me. I aim to inspire compassion and unity.

Rogers grew up in Kenilworth and attended New Trier High School for three years before sitting down one day to write a 10-page, handwritten letter to her father. The tennis player/badminton player/cheerleader had been eager to hit the books — and forehand winners — elsewhere.

That’s exactly what she did, with her father’s blessing. Rogers attended Loomis-Chaffee School in Windsor, Connecticut, for two years.

“I convinced my dad, in writing, that I wasn’t reaching my potential at New Trier and that I wanted to expand my worldview,” Rogers recalls. “When I arrived at Loomis-Chaffee, the girls weren’t as competitive in tennis as I had expected, and that made me look for challenges in another area. I got into plays; I started to enjoy acting.”

Rogers entered the world of theater at the boarding school with a major role in No Exit, an French existentialist play by Jean-Paul Sartre.

Rogers aced all of her classes in her year at Boston University’s School of Theatre and studied acting for three more years at Northwestern University.

The young woman then headed west, determined to become a movie star in California. Rogers scored “a bunch of roles,” including one as an FBI agent in that TV flick (Logan’s War: Bound by Honor) with Norris, and made appearances in about 50 commercials.

Rogers, before turning 30, returned to the North Shore and launched her career as a professional singer. It was on a stage, at a venue in Chicago, where she first met her future husband, John Raftery. Rogers had completed an open-mic performance when an audience member got out of his seat in the back of the room and neared the stage.

“There I was, with my guitar, meeting a guy after my set,” Rogers recalls. “He was nice. He was also nervous and jittery and humble. It wasn’t an act.”

John and Stephanie got married about two years later, and their son, Charlie Raftery, is a junior and a varsity tennis player at New Trier.

For more information about Stephanie Rogers and Story Jam, please visit hipchick.com and storyjamshow.com, respectively. Story Jam is scheduled to perform at City Winery on May 20, beginning at noon. City Winery is located at 1200 W. Randolph Street in Chicago.