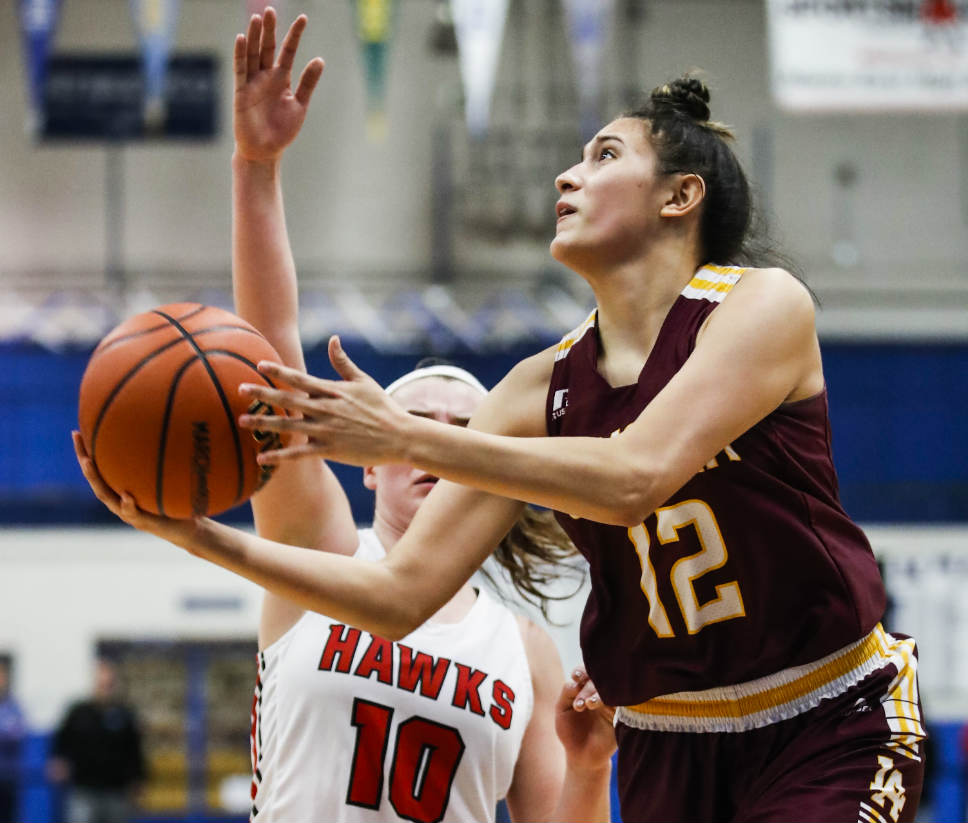 Loyola Academy’s Julia Martinez puts up a shot in a sectional semifinal win over Maine South. PHOTOGRAPHY BY JOEL LERNER

“We’re waiting, getting ready to play in a big game [a Class 4A Maine East Sectional semifinal vs. Maine South],” Ramblers coach Jeremy Schoenecker recalls. “Our team is on the other side of the gym partition, near the end of the first sectional semifinal, and there’s Julia, smiling and dancing with her teammates. She was leading the dance party.

“I then spoke with my assistant [Jon Wolfe] and told him, ‘I don’t ever remember being loose and so relaxed like Julia before games when I played.’ My pregame thing was biting my nails.”

Martinez, a co-captain and a St. Louis University recruit, was tougher than you know what this winter, pacing her team in practically every significant statistical category and leading the 25-6 Ramblers to the Maine East Sectional final against eventual Class 4A third-place finisher Maine West. The 5-foot-10, third-year varsity hoopster from Chicago’s Irving Park neighborhood topped the team in rebounds, assists, dance moves, steals (2.7 per game), deflections (2.4), free throws made (100) and free throws attempted (163) and earned The North Shore Weekend/Daily North Shore Player of the Year honors for girls basketball in the 2017-18 season.

So You Think You Can Dance producers haven’t called Martinez.

“With the ball in Julia’s hands, we were all confident,” says LA senior forward and Georgetown University-bound Lilly Wehman, the program’s all-time leader in career blocks with 218 in only 91 games. “It was awesome to have her as our point guard. A point guard, leading her team in rebounds … amazing.

“Julia,” she adds, “was so good at deciphering a defense and making the right decision on possessions. She’d beat defenses off the dribble, drive the lane or kick out a pass. She could finish or get the ball to the open teammate. All of us trusted her, and all of us had so much confidence in her.”

“Julia shattered that record, as a junior,” Schoenecker says with a chuckle, a reaction people typically make when they’re talking about stats and they’re filled with awe. “Her demeanor, along with the confidence she showed on the floor in games, impressed me. You know what they say about a point guard — a point guard is an extension of the head coach on the floor. I could not have been happier with the way Julia fulfilled that role for us this year.

“I’m excited to see what she’ll do in college, but it’s nice knowing we’ll get to see her play for Loyola Academy for another season.”

Fourth on LA’s all-time lists in career rebounds and career steals, Martinez had received 11 other offers from college basketball programs before choosing to verbally commit to SLU on March 16. Among the others vying for her “yes” were Boston College, the University of Alabama at Birmingham, Providence, Miami of Ohio, Illinois State and Brown.

“I absolutely love the coach [Lisa Stone] and her staff, plus I’m thrilled that it’s a Jesuit school like Loyola,” says Martinez, whose father, Rudy, is a coach with Illinois Lady Lightning — Julia’s travel basketball club — and whose mother, Theresa, served as one of Julia’s grade-school coaches and now records every minute of every Loyola Academy varsity game.

“I love everything about basketball; I grew up in gyms, and I’m a complete gym rat,” adds Martinez, also an outside hitter for LA’s varsity volleyball team. “I have to give credit to my sisters [Cecily, 22, and Rosie, 21], because I always wanted to beat them in basketball when I was little. Had they not played competitive basketball, I don’t think I would have gone out for the sport.”

Martinez attacked the basket in 2017-18 more than she had as a sophomore on varsity last winter. She looked for more opportunities to score, but her modus operandi during a season in which she finally played against players her own age remained a simple and an oh-so-valuable one: Do whatever I can to help the team win.

“You have to love to compete, and you also have to enjoy the sport if you’re looking to find success in basketball,” Martinez says. “One of my roles as a leader, I felt, was to make sure everybody had a good time. If I got on somebody’s case for some reason, I usually ended up laughing with that teammate later. I also liked to give high fives and compliments.

“My teammates believed in me and trusted me as a leader.”

Moments before every game this winter, Wehman never failed to make eye contact with Martinez. It was their thing.

“We’d look at each other with a ‘Let’s get this’ look,” Wehman says.