HIGHLAND PARK – Tyler Gussis has had an affinity for statistics since his father, Sam Gussis, compiled them for Tyler’s youth baseball teams and emailed them regularly to the family of each ballplayer.

“And I love sports, love watching games on TV with my family,” says the 6-foot-1 Gussis, a two-sport (basketball and baseball) varsity athlete and rabid White Sox, Bears, Bulls and University of Illinois athletics fan.

“One of my favorite stats in baseball,” adds the 2017 all-Central Suburban League North outfielder/pitcher, “is exit velocity [the speed of the baseball as it comes off the bat]. But some stats in baseball lie. All outs aren’t always bad outs; you might go 0-for-3 in a game, but two of the outs could be considered positive outs in certain game situations.” 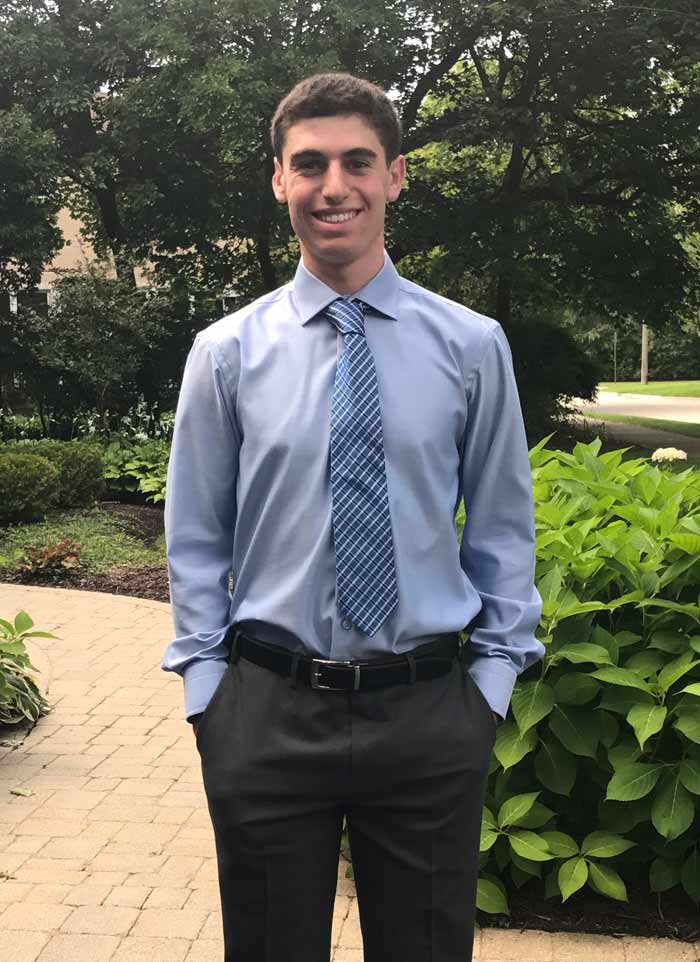 Gussis, the student-athlete, in a nutshell: a sharp single to a gap in the outfield, every single time. Nothing fancy, nothing sensational. His favorite professional baseball player is White Sox first baseman Jose Abreu.
“Because he’s quiet and consistent,” says Gussis, quiet and consistent in the classroom, on the basketball court and on the baseball field.

Among the classes Gussis is taking this year are AP Statistics, AP Biology, Immigrants’ Voices and AP Computer Science. Immune to senioritis, the young man who will graduate with five varsity letters (three in basketball, two in baseball) and in the top 10 percent of his class this spring has been a hit in the classroom, earning four A’s and a B+ in the first semester.

“I’ve learned a lot of life lessons through sports, with respect right up there at the top,” says Gussis, who has applied to Northwestern University and Dartmouth College (his father’s alma mater), to name a couple, and hopes to become an entrepreneur someday. “My basketball coach [Paul Harris] always encourages his players to strive for excellence on and off the court, to play with great effort at all times, to play with the right attitude.”

Gussis provided instant energy and reliable defense off the bench as a rookie varsity hoopster in his sophomore season. The forward started for the Giants last year and started and served as a quad-captain for a 15-win squad in his final season. He took care of the basketball as if it were somebody’s newborn.

A Gussis turnover was a rarity.

“Tyler,” Harris says, “was such a smart, steady player for us.”

“I’ve taught him defense,” says Gussis, whose younger sister, Holly, played defense for the Giants’ varsity field hockey team last fall. “It’s about effort, footwork, and if you play defense well, your coach will give you more minutes.”
Gussis’ time on baseball diamonds last year produced some impressive stats: a .365 batting average with a team-high 30 RBIs and 10 stolen bases for the CSL North champs.

Statisticians keep track of sacrifice bunts and flies, too. The leader in sacrifices in the Gussis household?
Not Tyler.

“My mom [Pam] makes sacrifices for her family every day,” the grateful son says. “She’s taught us the importance of being unselfish. She’s always been there for her kids, driving us to places, supporting us, helping us with our homework.”